The Insider’s Guide to the Must-See Gardens of Paris 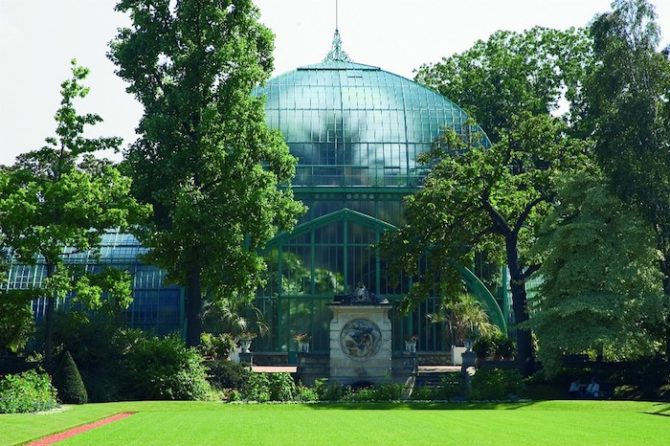 There are so many reasons to love Paris – museums, monuments, boutiques, food and atmosphere. However, an often overlooked element that largely contributes to all these experiences are its gardens. After Paris’s urban foundations were laid down by Louis XIV, the 19th century saw Napoleon III and his dream team of engineers, landscapers and gardeners put parks and gardens at the centre of their extension and embellishment projects for the city.

So how to choose from the nearly 500 parks, gardens, squares, promenades, and community gardens there are today? I have picked some of my favourite gardens, highlighting their seasonal features and places to see nearby, as well as tips to make the most of your visit.

Timing is a key factor – weekends are always more crowded than Monday to Friday. Early morning trips result in even fewer fellow visitors, and greater perfume from the flowers. Experiencing a garden at the end of the day is also a wonderful moment – again, it’s less crowded and the sunlight has a magical glow as it cuts through the trees. I’ve found this to be a good time to visit high-traffic gardens, such as Giverny. Opening and closing times and their exact addresses can be checked at www.parisinfo.com.

Do use your senses when exploring a garden. Sight and smell are obvious, but the variety of leaf and bark textures can be surprising. The presence (or absence) of sounds also tells you something about the space, whether it’s leaves rustling, acorns crunching beneath your feet or the music of nearby water – cascading, bubbling or simply silent. 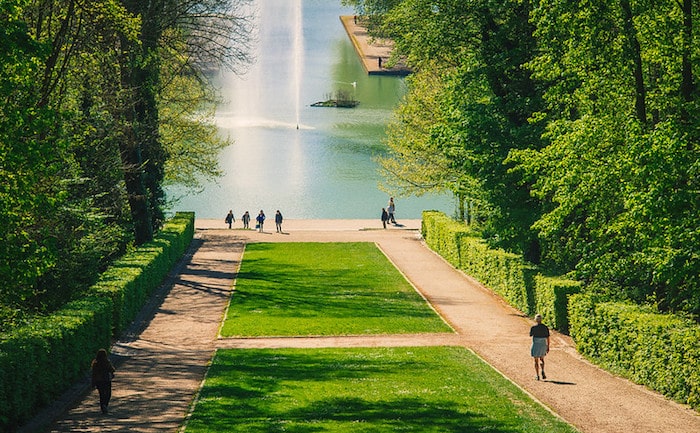 Having fallen in love with Paris 25 years ago, I have to admit that the songs and clichés about the city in the springtime are all true. I still remember leaving language class at the Sorbonne during April and discovering the double cherry blossoms. Their eye-catching nosegays are scattered through the city’s streets and squares – notably at the Jardin des Plantes and in the courtyard of the Petit Palais.

However, to truly experience their beauty, the Parc de Sceaux, situated just south of Paris on the RER B train line, offers two bosquets worthy of the Japanese Hanami. André Le Nôtre conceived the entire garden for Louis XIV’s finance minister, Colbert, in 1670, although it was completed by his son and modified thereafter.

The castle is now an interesting museum about the Île-de-France region. Like many of the gardens designed by Le Nôtre, it’s composed around far-reaching perspectives and features a multitude of spaces and fountains, including the recently renovated boxwood parterres, an Orangerie, rolling lawns and the beautiful Aurora pavilion. Le Nôtre’s gardens were planned with eternity in mind, as reflected by the choice  of such evergreens as boxwood and yew. The ephemeral charm of the park’s ‘North’ and ‘South’ cherry bosquets are all the more delightful and precious, not to mention a perfect picnic location.

Train: RER B to ‘Sceaux’ or Parc de Sceaux 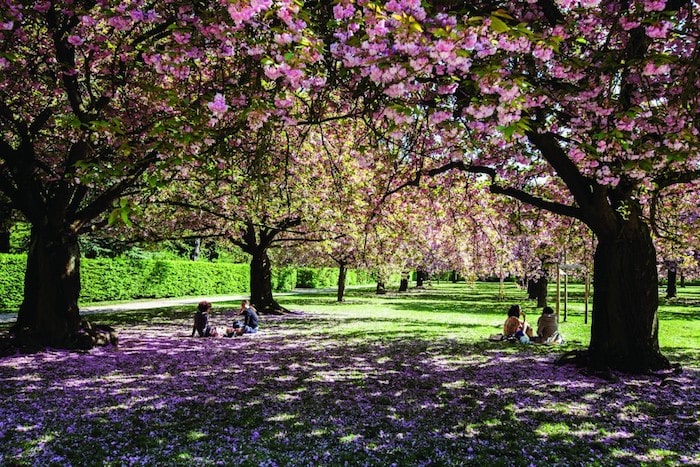 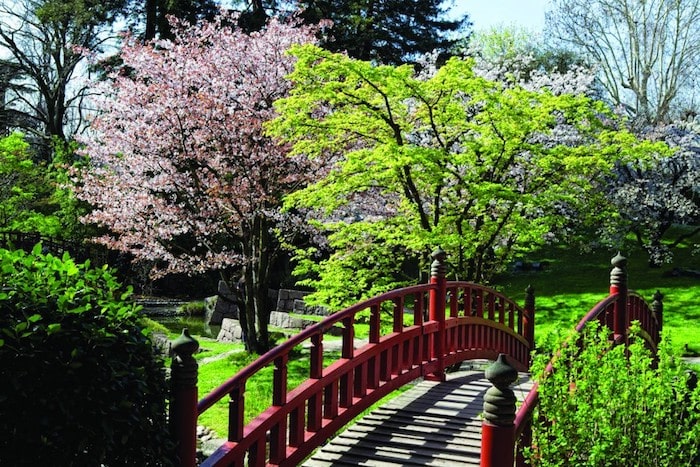 A hidden treasure along the quays of the Seine in the town of Boulogne-Billancourt are the gardens of the Musée Albert Kahn. Having created a sizable fortune and a bank of his own by the age of 40, Kahn devoted the rest of his life and his wealth to promoting world peace through engendering knowledge and respect among people. His estate and garden mirror the cultural diversity he so admired and became the backdrop for his foundation.

Kahn’s eight-acre park was restored in the spirit of its creator and displays a range of styles in a complementary fashion. There are two Japanese gardens illustrating his passion for Asian plants, featuring a typical village scene and a contemporary space designed around a water pool and a mountain of azaleas. Man-made elevations and narrow winding paths completely erase the garden’s boundaries and the city’s presence. A formal French garden is lined with climbing roses and spring-flowering fruit trees that lead to an English meadow filled with fritillaria and daffodils. Three distinct forests are evoked through the colours and scents of cedars, spruces and pines, and a water lily pond and prairie. 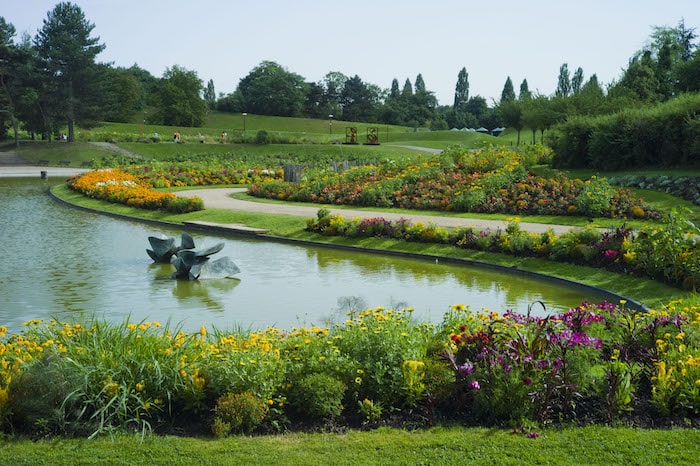 On the eastern edge of Paris sits the Parc Floral, the largest of the city’s five botanical gardens. It faces the Château de Vincennes and was carved out of an old military site before being transformed into a valley of flowers in 1969. The permanent collections include peonies, irises, medicinal plants and riotous flower beds that give a new meaning to the words ‘Flower Power’.

The park is punctuated with contemporary sculptures and the open-air Delta auditorium, which hosts jazz and classical concerts in the summer. It’s also home to two international floral competitions, which see 250 varieties of tulips displayed in the spring, and just as many dahlias each autumn. An amazing parade of colour occurs under the shade of the park’s Corsican pines from March to May, thanks to the camellia, magnolia and rhododendron collections. A playground, picnic area and mini-golf course make the Parc Floral a very child-friendly destination. 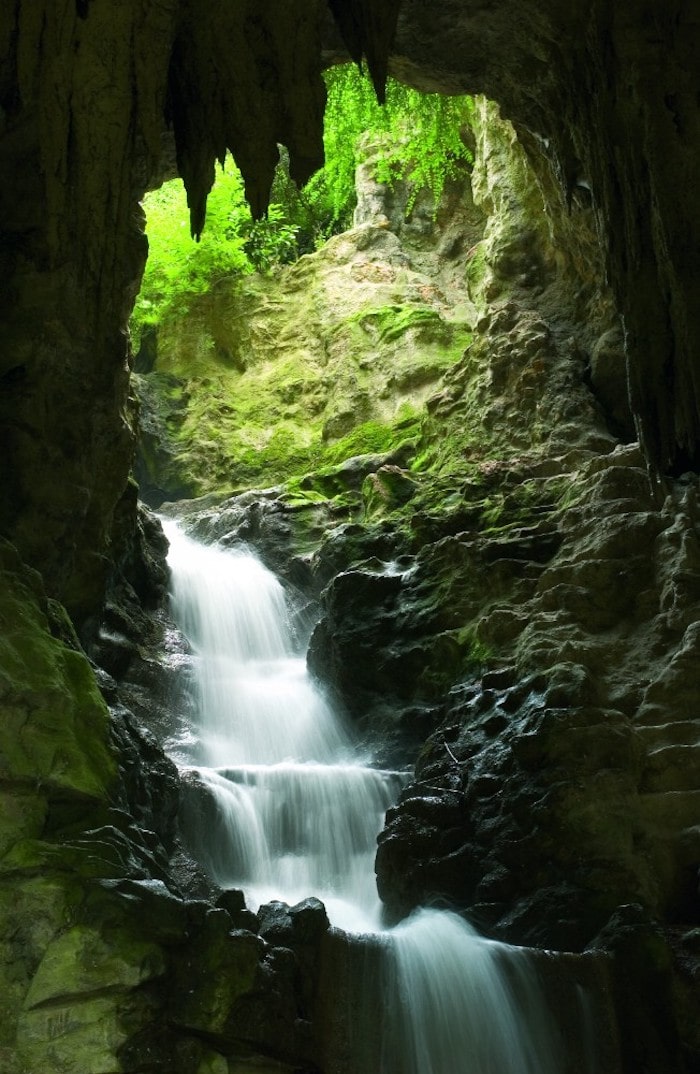 During the summer months in Paris, the days grow longer and the Parisians start to leave the city – it’s a great time to visit the Parc des Buttes-Chaumont, which is situated in the 19th arrondissement. One of Paris’s most popular and extraordinary parks, it’s perched up on one of the highest corners of the city and offers fantastic sunset views.

This former quarry and garbage dump was remodelled in record time during the ‘Second Empire’, to provide a sumptuous park for the 1867 World Fair. The park was originally meant to display then-recent innovations and modern day visitors still marvel at its 32-metre waterfall, 20-metre grotto with man-made stalactites and the romantic Temple de Sybille, which is surrounded by an artificial lake. The park’s numerous beautiful focal points can be appreciated from its many different levels and bridges, one of which was designed by Gustave Eiffel, and it also boasts a number of charming restaurants. 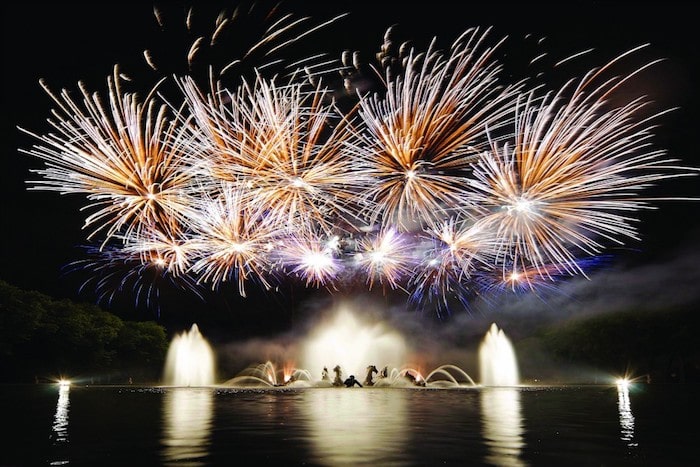 The gardens of Versailles don’t require a pitch from me. However, I’d encourage you to discover its grounds later in the day, on a long summer evening. One excellent way is to stroll through the bosquets of Le Nôtre, Hardouin-Mansart and Louis Benech to the music of Lully, with the fountains in play, during the Les Grandes Eaux Musicales show, which runs each weekend, April-October.

In addition, from mid June until mid September, an evening fireworks show, Les Grandes Eaux Nocturnes, takes this enchanting display one step further with a ballet of fireworks that would impress Louis XIV himself. Check www.chateauversailles-spectacles.fr for exact dates. 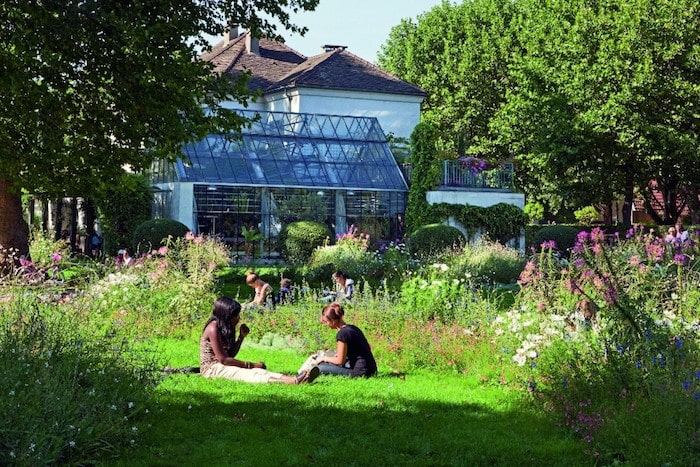 Like the Jardin des Tuileries, the Parc de Bercy runs along the Seine, and despite its contemporary design, has a history spanning several centuries. Once known for its 17th-century château by Le Vau, the quays at Bercy were later filled with warehouses, and it was the largest wine and spirits market in Europe up until the 1950s. To preserve this history, the garden maintains traces of its past and replanted 400 grapevines. Harvesting is weather-dependent, as with Paris’s other vineyards – in Montmartre, Belleville and the George Brassens garden.

The Parc de Bercy also boasts a vegetable garden, a scented rose garden and the ‘Romantic Garden’, which can be accessed by a footbridge over the Rue Kessel. 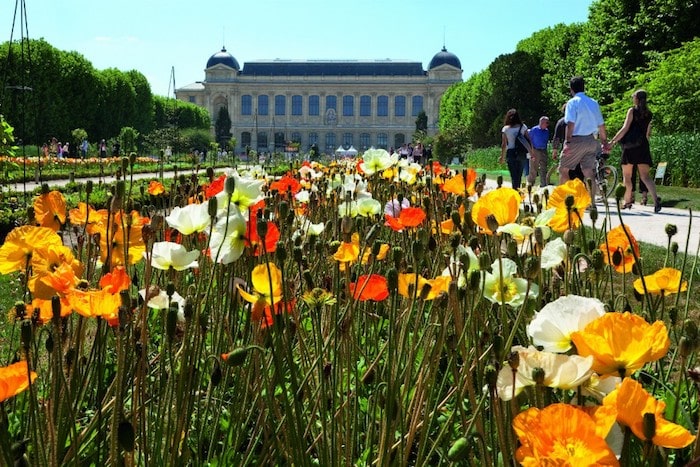 This garden’s seasonal floral displays, in both English and French styles, are at their peak in the fall – hundreds of chrysanthemums fill the urns that decorate the terrace. Despite its size, central location and prestige role as the French Senate’s ‘backyard’, there’s something intimate and personal about these paths and fountains. For over 400 years, artists, writers and students have found inspiration here, some of whom are now represented as statues. 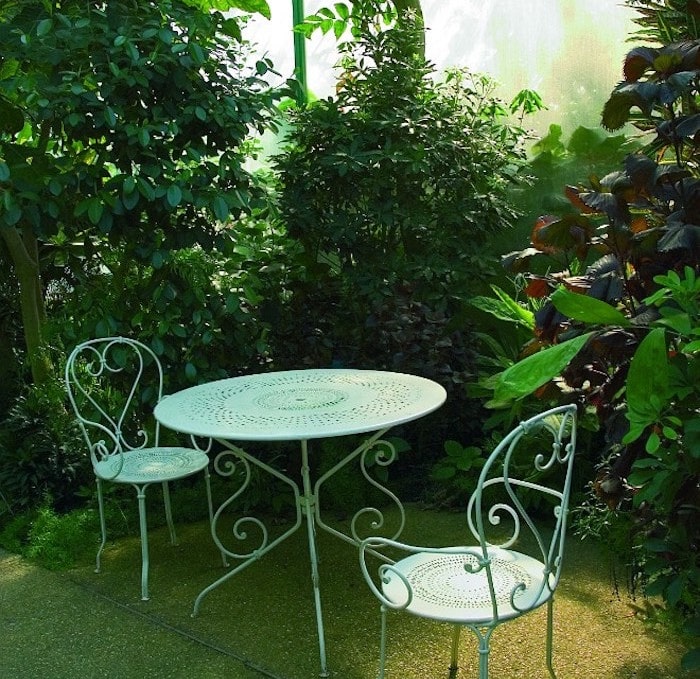 The grey winter months in Paris aren’t devoid of horticultural havens. The historical Auteuil greenhouses and the recently restored Jardin des Plantes hothouses both offer an evasion of tropical and subtropical forests.

You can lose yourself in their luxurious foliage, beautiful orchids and arid landscapes. Auteuil’s 19th-century Palmarium has a few tables and chairs inside, making it a lovely place to sketch or snack, and the Jardin des Plantes boasts a zoo and the Natural History Museum next door. 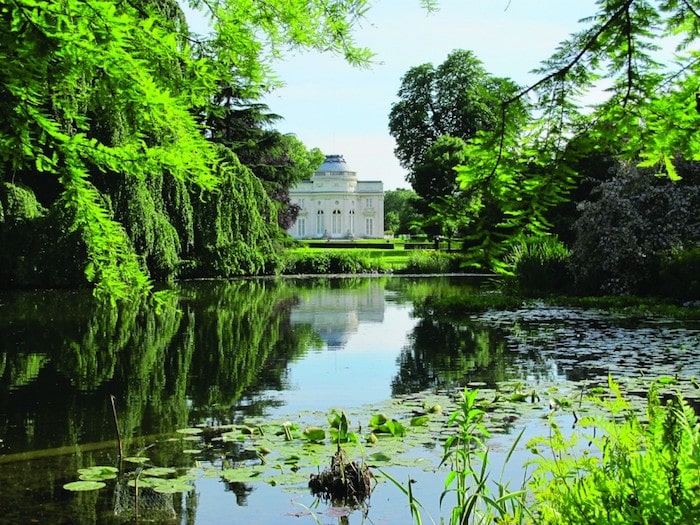 One of my truly favourite gardens is Bagatelle, on the far side of the Bois de Boulogne. This multifaceted gem offers a harmonious succession of landscapes throughout the year. The castle on the grounds was born out of a bet between the Comté d’Artois and his sister-in-law, Queen Marie Antoinette. His picturesque garden gave way to an English-style park in the 19th century, under the ownership of Lord Seymour and his son, Richard Wallace, which then became one of the city’s botanical sites.

Each February, gorgeous waves of colour from three million naturalized bulbs fill the lawns, which are followed by the peony and iris collections. These give way to the water lilies and more than 10,000 roses, many of which flower into October. The autumn is also ablaze – with asters, dahlias and the seasonal beds, all framed by centenary trees.

The winter graces of the Parc de Bagatelle are unveiled to the discerning eye and nose with fragrant Lonicera and Daphne. Between January and March, all the roses in the park are pruned, making this an ideal time for privileged conversations with the gardeners.

Although snow is rare in Paris, the Bois de Boulogne is often a few degrees cooler than the city and even light frosts can turn the park into a crystal palace, before the sun creeps across the lawns, thus returning its myriad attractions to their earthy tones.

I’m often asked when is the best time to visit a Parisian garden or park, and I most often reply “Now”, for there is always something to see and enjoy! 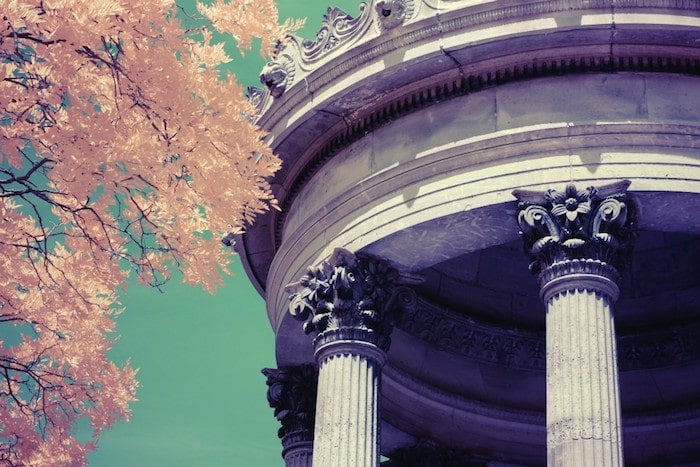 Previous Article “I Don’t Look Back”: An Interview with Juliette Binoche
Next Article Culinary Delights from Meuse, Lorraine

Planting Hope for the Future