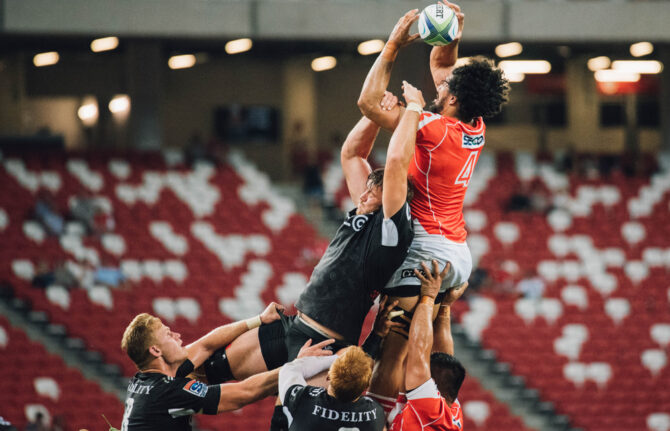 There are now 14 months to go until the kick-off of the 2023 France Rugby World Cup, and with sixteen of the twenty qualified teams now confirmed, there are still four places up for grabs in the tournament. July is set to be a pivotal month, with three of the four spots—Asia/Pacific 1, Americas 2, and Africa 1—to be decided by the end of the month and the France 2023 Rugby Tour setting off on 21 July. Here’s the latest news on the big event.

Three major rugby events take place this month, with the results deciding three of the four remaining places in the RWC 2023.

Portugal Snag a Spot in the Final Qualification Tournament

We announced last week that Spain had been disqualified from the Rugby World Cup after it was revealed that they had fielded an ineligible player during qualifying matches in 2021 and 2022. With Romania taking Spain’s Europe 2 spot in Pool B, this means that Portugal (who finished a mere two points behind Romania in the qualifying championships) will now continue their bid for Rugby World Cup qualification by taking the final place in the Final Qualification Tournament to be played in November 2022.

All eyes will be on the four teams competing in the tournament, as the winner will secure the last remaining spot in the 2023 RWC.

The France 2023 Rugby Train Sets Off This Summer

Rugby fever is set to sweep France this summer as the France 2023 Rugby Tour kicks off on 21 July. A Rugby World Cup Train, sponsored by Official Rugby World Cup partners SNCF Group, will be setting off on an 11,000-kilometre, four-month tour of the country, visiting 51 cities, including all nine of the 2023 host cities.

The special rugby train will feature four carriages of RWC-themed exhibitions open to the public, including a host of rugby and RWC memorabilia, and the legendary Webb Ellis Cup on display. Rugby Villages and photo exhibitions will also be held in each of the host cities along the way, with the train finally rolling into Paris on 10 November 2022.

Previous Article All Aboard the France Rugby World Cup 2023 Train This Summer!
Next Article The World’s Most Expensive Rosé