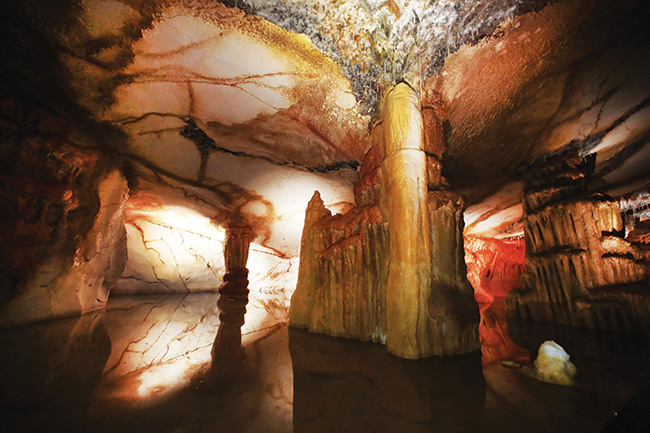 With a story some 30,000 years in the making, the caves of La Grotte Cosquer began a new chapter in June, as the cutting-edge Cosquer Méditerranée museum opened in Marseille. Lara Dunn explores the fascinating underwater caves without even getting her feet wet.

Ever seen a prehistoric penguin, or even knew such a thing existed? No, me neither until today. Strictly speaking, they are probably great auks, which were indigenous to northern climes until they were hunted to extinction in the 19th century. The key fact here, though, is that on the roof of an underwater cave in Mediterranean France there are drawings of these Arctic birds which date back some 30,000 years – a real sign of changing environmental conditions over the past millennia, from a climate more Nordic than the sunny warmth of Provence we know today. Welcome to Cosquer Méditerranée.

Following in the well-trodden footsteps of the internationally famous and UNESCO-listed prehistoric caves of Lascaux and Chauvet, the museum at Cosquer Méditerranée, in Marseille, has employed cutting edge technology to create a facsimile, allowing visitors to explore a fragile and irreplaceable cave system without damaging the original. Cosquer Méditerranée takes this principle a step further than its land-based predecessors though, since the original Grotte Cosquer is located under the sea, some 40 minutes by boat along the coast from Marseille and is only actually accessible by diving.

The story of La Grotte Cosquer and its discovery is the stuff of movies. In 1985, diver Henri Cosquer came across the entrance to an underwater cave system. Over the ensuing years, he visited the caves on numerous occasions, exploring and extending his knowledge of this remarkable location. In 1991, realising its full significance, Cosquer declared the cave to the French Ministry of Culture, which arranged for official studies and authentication to begin. Realising the sheer number and quality of the prehistoric carvings and paintings, which easily rivalled those found in other French locations, the cave was classified as a historic monument in September 1992.

The faithful recreation of the Grotte Cosquer is far from being simply a mechanism for allowing visitors to enjoy an inaccessible and sensitive location. Fears for the future of the cave system and its remarkable pictorial contents are real, since sea levels are rising steadily as time passes, threatening to fully engulf the currently only partially-submerged chambers. The technology that was developed to create the facsimiles of Chauvet and Lascaux has been used to great effect here in Marseille. Computer scans painstakingly carried out over the decades since the cave’s discovery – requiring access by a small team of dive-qualified scientists – have allowed for a slow process of 3D mapping of the interiors, which in turn has been transformed into a true-to-life accessible version of these precious caves.

Cosquer Méditerranée opened its doors in June 2022, after some six years in the making. The museum is housed in the stunning cantilever Villa Méditerranée building, which was designed by architect Stefano Boeri in 2013 to celebrate Marseille’s status as European Capital of Culture that year. Nestled next to the much-photographed latticework building of MuCEM (Museum of European and Mediterranean Civilisations) and a short walk from some of the city’s main sights – including the Fort Saint-Jean, the Musée Regards de Provence, the Cathédrale de Sainte-Marie- Majeure and the fascinating Le Panier district – Cosquer Méditerranée sits in what is fast becoming known as Marseille’s ‘museum district’.

The building, although undeniably impressive, has been underused and often left empty throughout its life, so when a new museum looking for a home came along, it was a match made in heaven. Fitting a reproduction of a 2,300m2 underwater cave system into an existing 1,750m2 building presented its own challenges, though. Amazingly, the creators have been faithful in the overall scale and proportions of everything, just reducing the size of some elements and adjusting spatial relationships of tunnels and the like to allow for practicality and smooth operation as a working museum. The end result is precise enough to be a historic record of the Grotte Cosquer and its decorations, should the worst happen to the original.

Entering Cosquer Méditerranée offers a glimpse into the subaquatic wonders discovered by Henri Cosquer all those years ago. Obviously, there’s no requirement for visitors to the museum to don diving apparatus and risk the bends. Instead, the lift from the entry lobby shows underwater scenes to give a sense of descending 37m below the waves. From here, an autonomous electric vehicle carries six passengers deeper into the cave system that Cosquer slowly discovered bit by bit during his years of exploring.

Audio guides in six languages tell the story, but it’s the scenery unfolding in the half-light that really captures the imagination. Sprayed concrete and polymer rock formations, stalactites and stalagmites, some emerging from real water, offer startling verisimilitude. The same artists behind the recreations at Chauvet and Lascaux have lent their expertise to the Cosquer project, and the attention to detail is meticulous. During Henri Cosquer’s first four visits to the caves, he didn’t see any paintings or carvings at all. Now, more than 500 works of cave art are visible to visitors, unfolding with each turn of the tunnels, just as they would in the original caves.

The caves are full of drawings of animals, such as this one of an auroch, a now-extinct breed of cattle © Lara Dunn

The first paintings that Cosquer saw, on a visit at the end of 1985, were of horses. Among some 200 different animals depicted – including bison, aurochs, ibex, megaceros, seals, fish and, of course, those penguins – the horse appears most frequently, with 63 representations (quite the herd!). Impressive and captivating as the drawings of all these creatures are, the jewel in the cave’s crown has to be the carvings, scratched most likely by Cro-Magnon hands into the soft substance of the walls and ceiling. Some depict animals and human figures, while others form geometric or seemingly random shapes. Coupled with 65 handprints and several remnants of firepits, Grotte Cosquer offers a unique insight into what was probably an important ceremonial space for early man.

After the tour of the caves, the upper cantilever level of the Villa Méditerranée (complete with glass panels in the floor through which the sea below is clearly visible) welcomes visitors to see life-size versions of the animals depicted on the cavern walls, as well as a pictoral history of early man.

Climate change is definitely the woolly mammoth in the room throughout the Cosquer project and in this gallery, an 11m wide projection of Marseille harbour and its changing sea levels really brings the last 25,000 years into sharp focus.

Whilst Cosquer Méditerranée is part theme park ride, part museum at its heart, it remains a scientific necessity to educate visitors and preserve this archaeological marvel in the face of our world’s changing climate and the challenges that brings with it. Especially if those prehistoric penguin pictures are anything to go by.