Beach Boys: Surf’s up in Biarritz 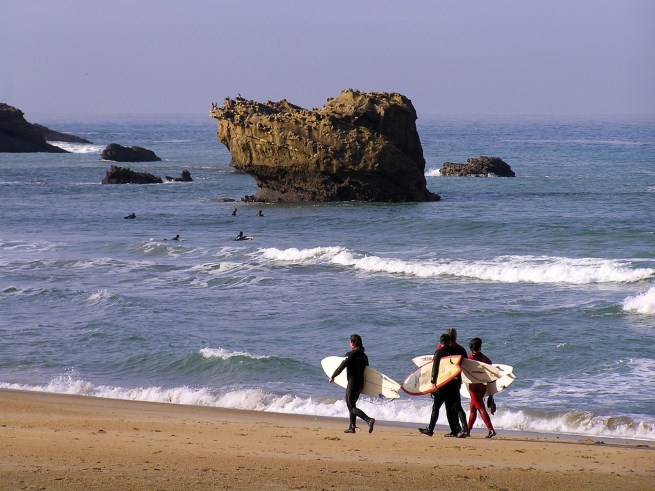 Downtown Biarritz and there’s a businessman struggling to get a surfboard through the front door of his office. All suited and booted in the lunchtime heat, he’s sweating and swearing as he manipulates the huge piece of polyurethane through the doorway. The lunch break is over and he’s obviously late for an afternoon appointment.

This is quite a common sight in Biarritz, France’s surfing capital. Instead of nipping off during the lunch hour for a run or to the gym, as office workers might do elsewhere in France, here it’s quite acceptable to swap business suit for wetsuit and hit the surf for half an hour. After all, in this seaside city, it takes just minutes to get from the office blocks to the beaches.

“Loads of people go surfing at lunchtime,” says Fred Braud, a surf teacher based in Biarritz. “They drive down to the beach, have a quick sandwich in their car, surf for an hour and then head back to work. It’s become a feature of everyday life in this city.”

Fred says he has friends who often go surfing before important business meetings. “They go surfing for an hour to clear their heads,” he explains.

“It makes them totally relaxed and more objective. Before the meeting they may be stressed. Once they’ve been surfing – out of the water, quick shower, spray of deodorant and off they go. They then come back to the office mentally settled and focussed.”

I was lucky enough to get a surfing lesson from Fred on the Plage de la Côte des Basques. Zipped up in my wetsuit, I started off lying flat on the board on the beach, practising the tricky process of standing up on the board. You have to bring your legs swiftly up under your body before popping up into an upright position. Easy when your board’s flat on the sand, but frustratingly difficult once you’re out on the waves. Fred also took me through the process of paddling through the surf and catching waves. It all requires a fair amount of exertion which may explain why pro surfers have such beefed up upper bodies.

After half an hour – and many rude dunkings in the Atlantic – I had finally manipulated myself into an upright position and timed things right to catch a wave. Once up and running, it’s easier than you’d think to keep your balance. The wave propelling my board was about as far from a tsunami as you can get, but still strong enough to take me right in to the shallow water before I lost momentum and came to a standstill. At last I was beginning to feel like a surfer.

Compared to the genuine surf dudes further along the beach, however, my exploits were insignificantly pale. There are some seriously accomplished wave-riders in this part of the world, and no lack of beaches on which they can show off their skills. Biarritz alone has six kilometres of beaches. Further north along the coast, where the city quickly gives way to huge expanses of rolling dunes, there is Anglet. South, towards the border with Spain, is Bidart, Guethary and St Jean-de-Luz. Wander down to any of these surf beaches, on pretty much any day during the summer, and you’re sure to see hundreds of wave-junkies atop their boards in varying states of balance.

Surfers have been ‘hanging ten’, as they say, in Biarritz since the 1950s. Barrelling in from the North Atlantic, huge swells are generated all year round in the Gulf of Gascony. The best conditions are normally in late spring/ early summer and autumn/ early winter. But as Fred Braud points out, you can be blessed with perfect waves at any time of year. Once, even in January, he remembers warm temperatures and huge waves.

Yet Biarritz differs from many of Europe’s other surfing destinations in that it has always maintained a certain level of sophistication. This is no surf bum’s hangout with camper vans and all-night beach parties. Dust off the sand and head into town, and you quickly realise how much money there is in this part of the Basque Country: the casinos, the smart golf clubs, the chic clothing stores, the expensive restaurants and the glitzy bars. And wandering between them all are some very well-heeled customers. ‘Bon chic, bon genre’ is how you might describe them.

“More and more it’s becoming a holiday destination for families and people with a certain amount of money,” says Fred. “It’s a very bourgeois clientele.” He admits he is all set to benefit financially from the gentrification of the surfing scene in Biarritz, but at the same time he expresses regret that “the hippie surfers are moving out”.

Dig deep enough, however, and you can still find some of the old-school surfers faithful to the bohemian roots of the sport. Alain Minvielle is a professional surfboard shaper. Based in Anglet, where he operates Minvielle Surfboard, he and his business partner claim to be one of only two artisans in France to still shape boards entirely by hand. “Other shapers use machines and then finish the boards by hand,” he says from within a cloud of polyurethane dust in his workshop. “We do everything by hand.” Alain first started surfing and manufacturing boards in the 1970s “in a garage with my mates”. And he’s been on his “quest for the magic board” ever since.

The evening after my first surfing lesson, I had dinner at one of Biarritz’s more surfer-friendly restaurants. Le Surfing, on Boulevard Prince de Galles, has a ceiling hanging with beautiful old surfboards and walls adorned with trophies and photos of famous surfers from the 1960s and 1970s. But I was disappointed there were no surf dudes hanging out at the bar. I expected to see at least a couple of tanned and long-haired beach bums in board shorts and Quiksilver shirts. Not a sausage.

Soul of the sport

The problem is these types simply can’t afford the prices of most of the smarter restaurants and bars in Biarritz. This city has always been very upmarket, and always will be. The bohemian surfers are presumably hanging out at the campsites and beach bars further up the coast.

So are Fred and his colleagues worried that the true soul of surfing that Biarritz had in the early days of the sport is now gone forever? “That depends on people like me who work within the industry,” he says. “If the city brings in just the bling bling teachers and surfers, then yes it will be lost. But if the older teachers stay true to the roots of the sport and transmit that to the people they teach, then maybe it won’t change. It’s up to us to maintain the same philosophy of surfing that we ourselves were taught back in the day.”

Biarritz-Anglet-Bayonne International Airport is served by easyJet from London Gatwick and Ryanair from London Stansted and Birmingham.