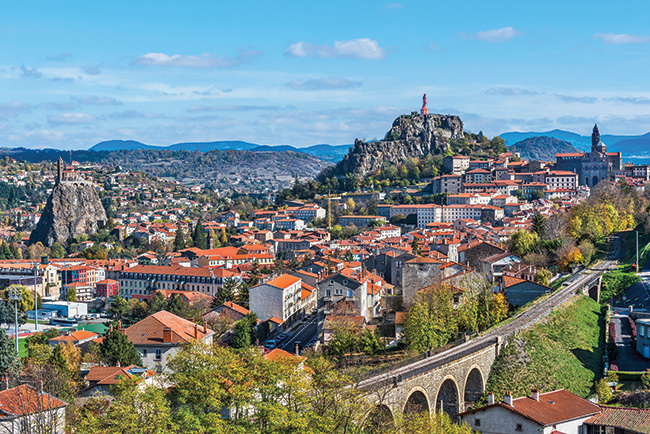 The Auvergne, in France’s Massif Central, is a wild, rugged region of forests, mountains, remote farms and extinct volcanoes. But there’s sophistication and culture, too, discovers Dominic Bliss.

Of all the leaders in Ancient Gaul, Vercingétorix was perhaps the most courageous. In 52 BC, this chieftain from the Auvergne region united the Gallic tribes and led a revolt against the mighty Julius Caesar and his occupying Roman legionaries. At the Battle of Gergovia, just south of modern-day Clermont-Ferrand, Vercingétorix and his followers crushed the Romans in a bruising victory. Ultimately, Caesar defeated the Gallic chieftain, captured him and later had him garroted. But his status as a folk hero across the Auvergne lives on to this day. In Clermont-Ferrand’s Place de Jaude, there’s an imposing statue of the leader astride his horse, sword aloft, which was sculpted by Frédéric Bartholdi, the artist who had previously created New York’s Statue of Liberty.

Statue of Vercingetorix in Clermont-Ferrand

Driving out the Romans

What would Vercingétorix think of modern-day Auvergne? Clearly, its few large towns and cities and its road infrastructure would be completely alien. But much of the topography – the low mountains, the rugged plateaux, the dozens of dormant volcanoes and the vast tracts of forest – would be easily recognised by Ancient Gauls. And it’s this rugged, sparsely populated terrain that makes modern-day Auvergne such an intriguing place to visit.

Our driving tour begins and ends in Clermont-Ferrand, the region’s only major metropolis. It’s easily accessible via autoroute, and slightly less accessible by air from the UK, requiring a stopover in Paris. With its dark, volcanic lava stone, Clermont-Ferrand has a certain gothic feel to it. But there’s nothing gothic about the buzzing lifestyle and culture of the city.

Many of the old industrial factories have been demolished, giving more emphasis to the wide avenues, fountains, cafés, restaurants, boutique shops and art galleries. Standing sentry above it all is the twin-spired Cathédrale Notre-Dame-de-l’Assomption. In summer, you can climb its Tour de la Bayette for panoramic views of the region. The other great church is the Basilique Notre-Dame-du-Port, a Romanesque beauty that was granted UNESCO World Heritage status back in the 1990s.

Nine centuries before that, it was right here that Pope Urban II launched the first crusade, triggering decades of bloody conflict and the Occitan-language rallying cry: “Dios lo volt!” (“God wills it!”). Evidence of Clermont’s more recent industrial past can be found at L’Aventure Michelin. Although it shamelessly celebrates the tyre brand, it also offers visitors plenty of intriguing (and interactive) history on motoring and map-making – all convivially hosted by the famous Michelin Man. Another attraction well worth visiting is ASM Experience, a rugby union theme park affiliated to Clermont’s local team ASM Clermont Auvergne. Here you can test your skills with the oval ball, commentate on matches and enjoy a stadium tour.

Drive out of Clermont-Ferrand, into its western suburbs, and you quickly cross into one of France’s most outstanding and photogenic regional parks – the Parc naturel régional des Volcans d’Auvergne. Stretching for 1,500 square miles, from Châtel-Guyon in the north down almost as far as Aurillac in the south, the park forms the backbone of the Auvergne, and boasts 150 or so (no one can agree exactly how many) dormant volcanoes. Some rise so high above the Massif Central, they could be taken for mountains; others have a classic conical shape with craters gouged out of the top; many are little more than hillocks. Fortunately none has erupted in the last 5,000 years, so even Vercingétorix and Julius Caesar would have felt safe marching across the solidified lava fields and black soil.

To understand this amazing natural landscape, ideally you’d get that black soil beneath your feet by hiking the Chaîne des Puys – a string of 80-odd volcanoes running north to south. But if time is short, there are three sites very close together which will give you an impressive taster of the local volcanism. First head a short way northwest up the D941 to Puy Pariou. This little volcano is perfect in size and shape: conical, symmetrical and with a crater in its top, it rises 1,209m above sea level. A footpath leads you up the outside slope, around the rim and down into the centre of the crater – now all covered in grass and scattered with volcanic rocks.

A short way further along the D941 is Vulcania, a theme park dedicated to all things volcanic which features earthquake platforms, 4D films and multiple interactive visits, both amusing and educating visitors in equal quantities.

But perhaps the most dynamic site of all in this park is the 1,465m Puy de Dôme, just south of Vulcania, off the D942. If you’re fit, you can make the hour-long hike from the car park all the way to the summit. Otherwise you can hop on the cog railway, the Panoramique des Dômes, which will whisk you up to the top, Paris Métro-style, in just 15 minutes. The rewards at the summit include views of the flocks of paragliders circling high above (usually in the milder months), and the powerful westerly gusts coming in from the Atlantic Ocean. From here, drive southwest to Orcival, a dinky village of stone houses which is home to the 12th-century Basilique Notre-Dame, and then on to Le Mont-Dore, which first made its name as an elegant spa town and later as a ski resort. You can still enjoy the spa facilities, but global warming means the snow sport is rather hit or miss nowadays. During the coldest part of winter it’s not bad for a day or two’s skiing.

From Le Mont-Dore, turn west to the D922 and then south and south-east for the long drive to Saint-Flour. If you have time, stop at the 13th-century Château de Val, near Lanobre, which, with its five turreted towers, sits prettily on the edge of the Lac de Bort-les-Orgues, and has starred in thousands of Instagram posts.

Saint-Flour is a town split in two: its upper section (ville haute) sits on top of a volcanic ridge, with ramparts and fortifications, while the lower section (ville basse) stretches along the River Ander. More interesting still is a vast viaduct just a little way south of the town called the Viaduc de Garabit. Constructed in the 1880s by Gustave Eiffel (yes, he of the famous tower), it’s 565m long with an enormous central arch.

The drive east from here to Le Puy-en-Velay, along the D990 and the D590, wriggles and winds across the mountainous landscape, and you’ll need to keep your wits about you as you take in the towns of Védrines-Saint-Loup, Pinols, Langeac, Siaugues-Sainte-Marie and Chaspuzac. The views are, unsurprisingly, amazing, and the skyline as you approach Le Puy-en-Velay is one of the most distinctive in all of France.

This beautiful town is dominated by two steep volcanic pillars standing high above the rooftops. One has the 10th-century Saint-Michel d’Aiguilhe chapel atop it (reached by climbing up the 268 steps which have been carved into the rock), while the other features an iron statue of the Virgin Mary, made from over 200 Russian cannons captured at the Siege of Sevastopol. The town’s third high point is the 12th century Cathédrale Notre-Dame du Puy, with its distinctive striped white sandstone and black volcanic stone façade. Pilgrims embarking on their journey to Santiago de Compostela, along the Way of St James, regularly gather here to be blessed before they set off.

Le Puy is also home to a world-famous legume – the lentille verte du Puy. Granted AOP status, this little chap has been cultivated in the local volcanic soil for more than two millennia. “Considered by many to be the best in the world,” says Janet Clarkson in her book, Food History Alamanac, “they have a unique, slightly peppery taste and are sometimes referred to as ‘poor man’s caviar’.”

You’ll need more than a few scoops of poor man’s caviar to give you the energy for the lengthy drive north from Le Puy, along the D906. Soon, you will enter the magnificent Parc naturel régional Livradois-Forez: with a mixture of vast conifer forests, moorland and meadow, it stretches north for 1,200 square miles, almost as far as Vichy.

First stop is La Chaise-Dieu, the hilltop village which is home to a particularly special Benedictine abbey church. Despite being ravaged by the Huguenots in the 16th century, it still has the power to inspire awe, with its oak choir stalls, Flemish tapestries, a 15thcentury Dance of Death fresco, and the tomb of Pope Clement VI, who began his vocation as a monk here.

Most fun of all, though, has to be the Salle de l’Écho (the echo room), where you can whisper sweet nothings into one corner of the room and be heard by your sweetheart in the other.

From here, the road continues north through Ambert, which was once France’s most important centre for paper production, and close to Thiers, which is still France’s centre of knife production. Eventually we reach Vichy, our last stop on the driving route. Home to Marshal Pétain’s puppet government during the Second World War, this beautiful city boasts architecture ranging from Art Nouveau and Art Deco, to Neo-Baroque, Neo-Gothic and Neo-Classical.

The beautiful spa town of Vichy

Fatigued by your long drive, you may want to avail yourself of Vichy’s numerous spas and famous healing waters. From Vichy, it’s a fairly quick autoroute drive south back to Clermont-Ferrand, to complete the circle. In all, your odyssey will have covered a fair few kilometres, often along demanding mountain roads – it may be worth nipping back to the Michelin factory for a new set of tyres.

Like much of France’s mountain cuisine, Auvergne food may be unsophisticated, but it’s certainly very filling. Two comfort-food dishes you’ll love are la truffade (sliced potatoes fried in lard with Tome cheese added) and l’aligot (puréed potatoes mixed with cheese and poured from the pot onto the plate very theatrically). A popular soup is soupe au chou, with cabbage, pork, potatoes and lard, while the famous potée Auvergnate is a hotpot with cabbages, potatoes, leeks, carrots, turnips and pork.

And don’t forget about the world-famous green lentils from Le Puy-en-Velay which feature in various recipes including petit salé, a delicious and hearty pork dish which takes two days to prepare. Steak is popular, too, thanks to the Salers cattle from Cantal and Charolais from Allier.

The region enjoys five different AOP-labelled cheeses – Saint-Nectaire, Bleu d’Auvergne, Fourme d’Ambert, Salers and Cantal – and a wide range of saucissons, ideal for a picnic. Wine isn’t abundant here but two types which stand out are Saint-Pourçain and Côtes d’Auvergne. Teetotallers are well-catered for thanks to the local Volvic water.