The French Road Trip: The Best Drives in the South of France 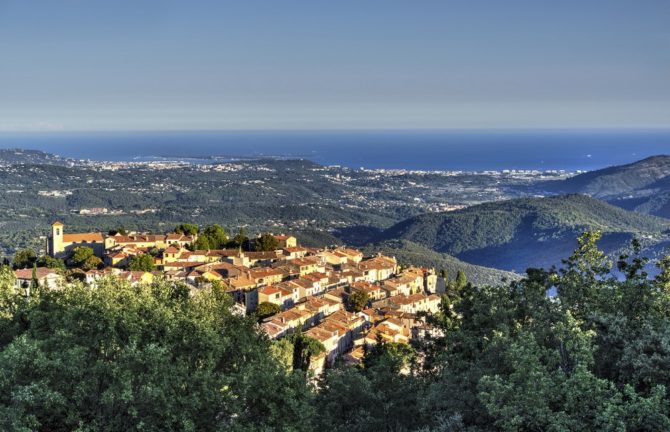 The road trip. The scenic drive. The self-guided tour to new destinations. For good reasons, the idea of whimsical travel– nourishing to the soul and pleasing to the eye– has been one that has captured the imagination of adventure-minded travelers in the United States. But the classic road trip isn’t limited to States-side excursions; there’s nothing like travelling by car to enjoy the sights, sounds, and tastes of France. Having travelled to France at least 18 times in the last 20 years, and having toured extensively by car at least a dozen of those times, I have come to look back on the drives around this grand country as some of the most enjoyable travelling experiences of my life—packed with history, culture and cuisine.  And, in thinking of those drives, I am inspired to two things – let other travelers know how easy and enjoyable driving in France can be, and to visit France again for more drives and discoveries!

Twenty years ago, having married in early January, my wife and I took a delayed honeymoon, in late August, to the south of France, where we discovered a drive that remains one of our favorites in this beautiful country. Arriving at the Nice Côte d’Azur airport, we picked up a compact manual shift Citroën Xsara (two decades on, the Xsara has transformed into the Citroën C4 Millenium) on the Europe by Car tax-free new-car lease plan and headed for Cannes, where the sun sparkles on the aqua-blue green of the Golfe de la Napoule. Here, the westernmost part of the Alps bends southward to meet the Mediterranean Sea for a seemingly eternal embrace between the splendid warmth of the bright sea and sun, and the majestic mountains rising up out of the rugged terrain of the Côte d’Azur. There, while you choose whether to gaze at the sea below or the hills above, you can sip rosé wine, eat the most delectable fish caught by local fisherman that morning, and, later, enjoy a convivial nightlife with tourists and locals alike. 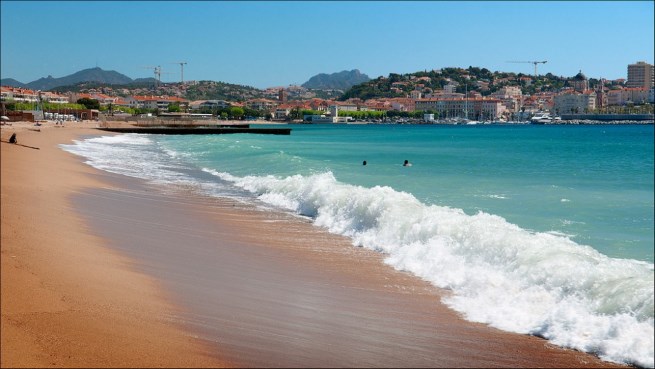 Credit: by valcker/Public Domain
On the beach in Saint-Raphael

After a night on the town, you can rise at an hour more in keeping with vacation, and still have time for a late morning drive. A beautiful day for the beach can wait a few hours, as that same beautiful day can be perfect for enjoying a pleasant drive along the coast out of Cannes to the quieter sun splashed Saint-Raphael.

Head west out of Cannes on Boulevard du Midi Louise Moreau and take Avenue de la Lérins (named for the islands just off the coast of Cannes – worth a visit, but this is about the pleasures of a self-guided driving tour, not a choppy ferry ride out to an island) to Boulevard de la Corniche d’Or. Wind your way along the coast between the sea and the Esterel Mountains to Pointe de L’Esquillon for a picturesque view of the entire coast around Cannes. Continuing on, Boulevard de la Corniche d’Or (route D6098) becomes Avenue de Miramar, then Route des Calanque (route D1098, or D559 depending on the map you’re consulting), where you’ll pass numerous calanque-like inlets until arriving at worthwhile Pointe du Cap Roux, by which time the route name has changed to Route de Trayas.

Pointe du Cap Roux affords a wonderful vista of both the sea and the rust-colored rocks of the Esterels cresting out between the jagged landscape and forest of dark green oaks. For reasons perhaps known only to the locals, the route name continues to change as you travel along the coastal road, but it’s best to pay that no mind as you pass fishing villages with modest candy-colored fishing boats tied to well-worn docks, and small sandy beaches nestled into tiny inlets forged by the forays of the Esterels reaching into the sea. Nearer toward Saint-Raphael, World War II history buffs might take a moment to stop at Le Dramont – one of the beachheads where Allied troops landed in the south of France in August 1944 to free Provence from the occupying German troops. 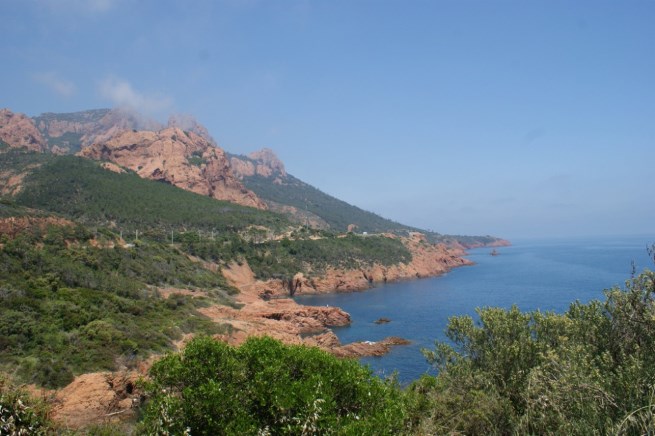 It is at Saint-Raphaël, a charming beach and fishing town, where you may want to stop for some refreshment and enjoy a typically unhurried lunch in the south of France. Any of the restaurants and cafés near the port or across from the beach will do. Le Mérou Ardent, across from the beach on Boulevard de la Liberation, is typical and breezy for a blissful Provençal meal by the sea, and there will still be time to make your way back to Cannes in time for a late afternoon swim in the warm Mediterranean. (Note: traffic can move slowly along the costal roads, especially in summer months; taking into account stops to view the scenery, picture taking, and lunch, total round trip should take about 4 hours).

While there are other enjoyable drives near Cannes, after a few days of soaking up the sun, sights, and meals by the sea, head towards nearby Provençal destinations where there are wonderful drives ahead. A must-see destination is the exquisite city of Aix-en-Provence, known for its universities, its summer theater festival, its fountains, its famous tree-lined esplanade Cours Mirabeau, and as the town where the master artist Paul Cézanne built his studio in 1897, living there until his death in 1906.

The main highway from Cannes to Aix-en-Provence is the Autoroute A8, and the trip, without stopping, takes about 2 hours.  However, taking the more rural route DN7, which runs parallel to A8, offers a more scenic drive past fields of sunflowers and lavender, groves of dark, twisted olive trees, and vineyards growing the grapes that made the wine you savored at last night’s dinner. Both A8 and DN7 pass Saint Maximin-la-Sainte-Baume where the 13th century basilica is an outstanding example of gothic architecture.

If you did not from the start at Cannes, it is from here that you may want to abandon Autoroute A8 and pick up the rural national route DN7. It is from DN7 that you can more easily find your way to one of the most famous natural attractions in the south of France – that of Mont Sainte-Victoire. Painted several times by Cézanne, it can be viewed close up by taking DN7 to route D56C, and following D56C to route D17.

All along D17 there are spectacular views of the southern face of Mont Sainte-Victoire (hikers may want to return another time for a climb onto the mountain to Croix de Provence, which can be reached from the Notre Dame de Sainte-Victoire priory). Auto tourists may leisurely seek more views of the mountain from the road by following route D17 east, then D23 north until you reach route D223, which becomes route D10, from which, travelling back west on D10 (direction now once again toward Aix-en-Provence), you can view the northern side of the mountain Cézanne seemed to never tire of portraying in his own unique and influential ways. 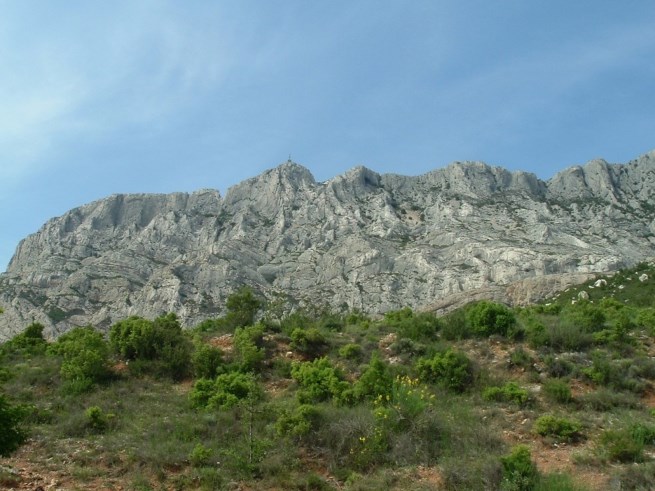 After a drive of such scenic beauty and natural wonder, Aix-en-Provence is a city, like so many in France, where it is best to park the car at the hotel and enjoy the city by walking and discovering the cafes and fountains on Cours Mirabeau, in particular Café-Brasserie Les Deux Garçons, there since 1792, and frequented through the years by such luminaries as Cézanne and Emile Zola. You can also follow in the footsteps of Cézanne. Aix-en-Provence honors its favorite son by placing studs stamped with a “C” along the streets and paths he walked so you can easily guide yourself to the homes of his friends, cafes he frequented and, finally, his studio where he painted some of his most famous and revered works.

Whether it’s lunch or dinner, you can count on restaurants and cafés in Aix to serve up dishes replete with the typical Provençal ingredients of olives, olive oil, fresh fish, fruits, vegetables, cheeses and, of course, some lovely Provençal wine. It is also in Aix where you’ll find the callisson – a confection of almond paste flavored with melon and orange – a delightful treat to enjoy as you wander and lose yourself in the tiny tangled streets and discover the artistry of small shop owners taking pride in the way they display and care for their crafts, pastries, and other fine products.

Throughout Aix-en-Provence there are museums, squares, a farmers’ market, and myriad delightful surprises, and once your culinary palate has been sated, and your artistic palette inspired, you’ll be ready to move on with another great drive through the south of France, past wondrous scenery, historical points of interest, and a marvelous choice of inviting cities and villages throughout Provence and points west.  But those adventures will have to wait for the next time I have an opportunity to enlighten fellow adventure travelers about some of the favorite drives I’ve discovered over the past 20 years of travelling in France.