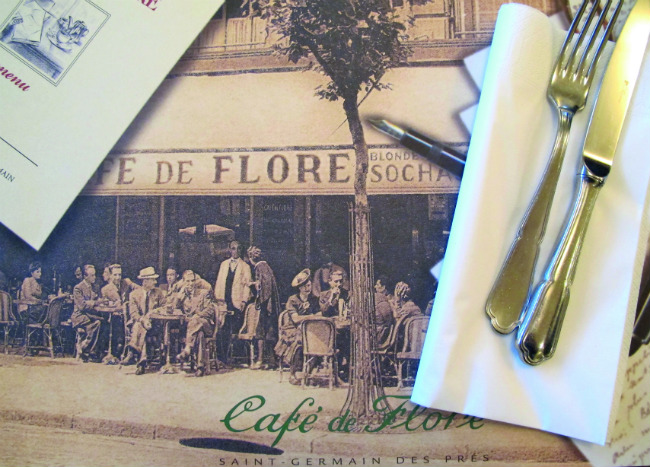 Still popular with celebrities, a century ago Les Deux Magots and the Café de Flore were the haunts of some of the greatest thinkers of their day

“If you are lucky enough to have lived in Paris as a young man, then wherever you go for the rest of your life, it stays with you, for Paris is a moveable feast.” In these few words written to a friend, Ernest Hemingway affirms that the spirit of Paris lingers with you long after the city has been left behind. Hemingway was using a clever bit of liturgical jargon too. A moveable feast is literally a religious holiday, such as Easter, that is celebrated on a different date each year. And “Papa” knew best. To this larger-than-life American, Paris was a banquet for the senses, like a feast celebrated on high days and holidays, with tantalising tastes, aromas and relationships to enjoy every day. The once-again popular French edition of Hemingway’s 1964 memoir A Moveable Feast translates simply into Paris est une fête, Paris is a Celebration. 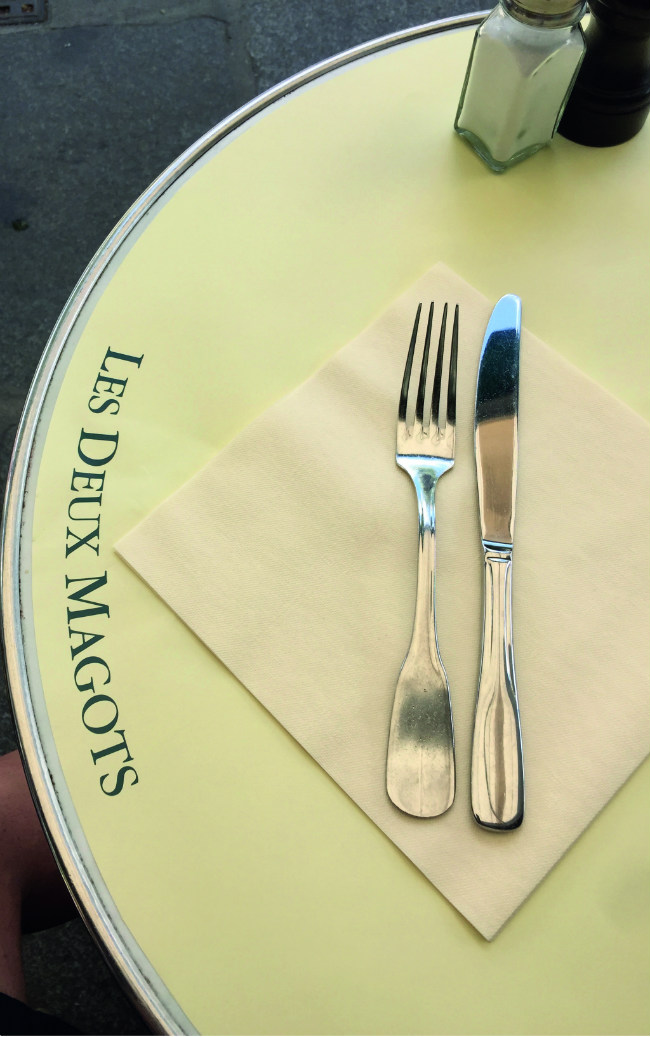 The Lost Generation, which included Hemingway, was a disenchanted set of hard-drinking, fast-living writers; US expats who gravitated to post-World War I Paris because they felt spiritually alienated from their home. The capital soon became their hub of literary experimentation. Any young American with wanderlust, who could scrape up enough for a one-way passage to France, found that the Paris of the time was inexpensive and convivial – the expats a welcoming clique.

Two famous haunts of this so-called Lost Generation, described in Hemingway’s A Moveable Feast, were the Café de Flore and Les Deux Magots. Always in competition, these cafés in Saint-Germain-des-Prés would be next-door neighbours were it not for the narrow rue Saint-Benoît – a 30-metre dash is all that separates the two. Shoulder to shoulder, the disillusioned set of Americans wined, dined, mused and argued with some of the philosophers of the time – big-time thinkers like the Surrealists’ André Breton, Sartre’s Existentialists, and other avant-garde artists and authors. 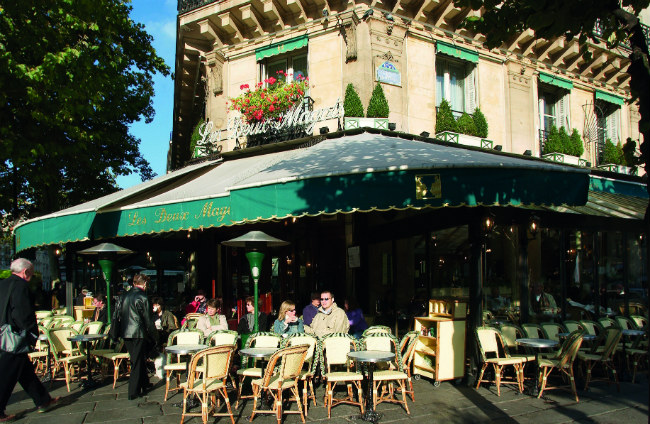 The café beneath the large green awning above is, arguably, the birthplace of Surrealism. It is named after the pair of magots inside, statues of two Chinese philosophers who have overseen the café’s activities from their perch on the restaurant’s central pillar since the 19th century. These wooden mandarins are all that remains of the silk merchant’s shop that stood on this corner from 1873. It became a café in 1885, and the Symbolist poets Stéphane Mallarmé, Paul Verlaine and Arthur Rimbaud were among its rst regulars. Les Deux Magots quickly became a hangout for famous writers and artists, and those aspiring to fame.

“Papa” Hemingway preferred a back table at the Deux Magots, his favourite place for serious talk. In his stentorian stage-whisper he would read aloud the rst poetry he had written since the Great War. James Joyce would share a glass of his favourite Swiss wine at the Deux Magots with anyone, but with Hemingway he always drank dry sherry. After all, Hemingway was not just anybody; and he was no stranger to a fight. When Joyce got ‘peloothered’ and picked altercations, he would duck behind the part-time pugilist and say, “Deal with him, Hemingway. Deal with him.”

Some of the most memorable art and literature of the 20th century had its origins here. This is where Hemingway worked on his quintessential Lost Generation novel The Sun Also Rises, using the café as a setting in his 1927 classic. Under the revolutionary eye of André Breton, the Surrealists fashioned their manifesto here, while their widening circle attracted the visionary artists Man Ray, Max Ernst and Joan Miró. Essayist Janet Flanner wrote: “The Surrealists had their own club table facing the door of the Deux Magots, from which vantage point a seated Surrealist could conveniently insult any newcomer with whom he happened to be feuding.” 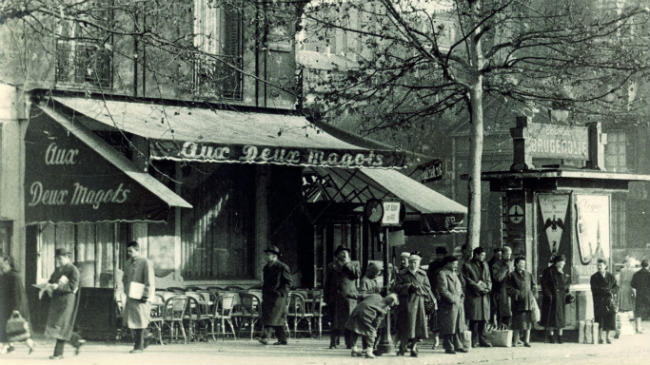 Oscar Wilde was an early habitué of Les Deux Magots, living on the deliberately meagre allowance sent from his wife of just three pounds a week. She knew he could resist everything but temptation. He lived and died just minutes away, on the rue des Beaux-Arts. The aristocratic aviator Antoine de Saint-Exupéry wrote his autobiographical work Wind, Sand and Stars at a table in Les Deux Magots. In 1936, just before Picasso began his iconic Guernica, his name became forever entwined here with that of his lover and muse, Dora Maar. Picasso first spied Maar at a table at Les Deux Magots madly jabbing a pen-knife between the fingers of her outstretched hand, sometimes cutting herself in the process. When they were introduced, she replied to Picasso’s French inquiry in his native Spanish. His infatuation was complete. He kept Dora’s bloody glove as a souvenir. 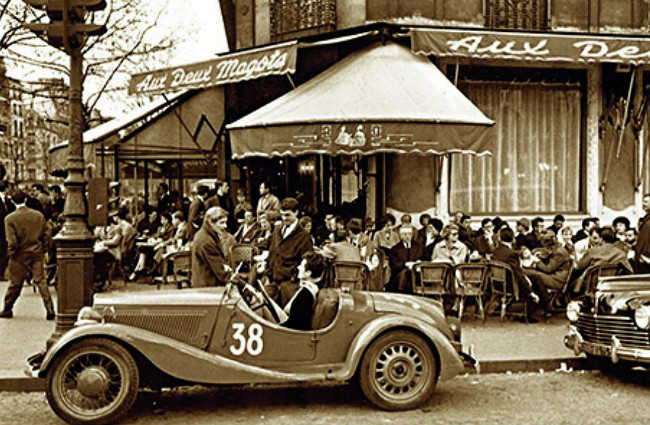 The interior of Les Deux Magots seems untouched since the days of Art Deco, with chandeliers, columns, banquettes and brass reflecting the character of the 1930s in its wall-length mirrors. On the menu are standards: bistro staples duck à l’orange and chicken supreme; omelettes, quiches, croque-monsieurs, salads, and sandwiches made with Poilâne bread. For refined palates there are wild Burgundy snails or Petrossian caviar with toast and cream. Included in the sweet courses are Pierre Hermé’s pastries, the ubiquitous macarons, and an assortment of glaces.

The prices, unfortunately, are pure 21st century, but you visit the Deux Magots to soak in the atmosphere that once inspired great philosophers, writers and artists, not to worry about prices. The terrace tables facing Saint-Germain-des-Prés are the best place to take in the theatre of the street and to study the west façade of the famous church. A quick dart to Café de Flore reinforces Hemingway’s declaration that Paris can be a moveable feast, or a least a feast on the move. 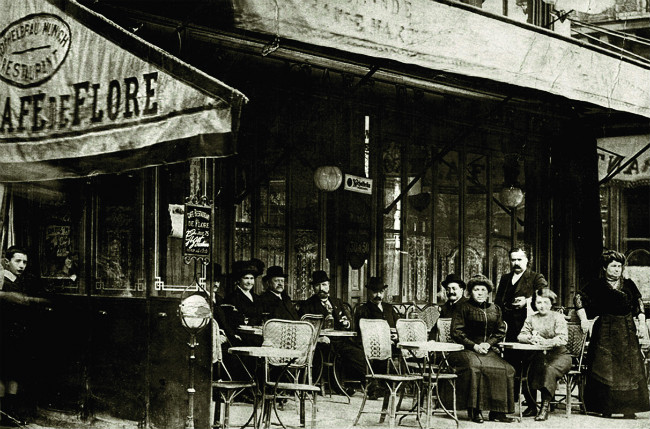 Parisian quasi-intellectuals have argued through the night on many subjects but one thing they have never been able to agree on is which is best: Les Deux Magots or the Café de Flore. Ah, well… À chacun ses goûts.

Still a vital part of Parisian café culture, the Café de Flore gained its name from a large figure of Flora, the Roman goddess of spring, that is thought to have once been located across the boulevard Saint-Germain. The statue hasn’t survived, but the ‘de Flore’ sign dripping with seasonal flowers tells you that you’ve found the right spot.

Like the Deux Magots, this bar began life in the Belle Époque. However, also like Les Deux Magots, the interior was transformed over the years into an example of Art Deco design. In the years just before World War II, Jean-Paul Sartre and Simone de Beauvoir were often seen amid the congregation of Existentialists at the Café de Flore. Albert Camus would arrive, and would sit as far from Sartre as possible – the two writers detested each other. 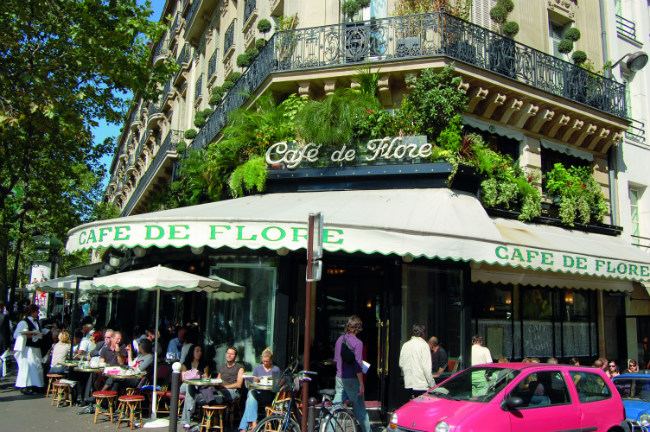 During the Occupation, Le Flore had one significant advantage over the Deux Magots: a heated upper floor. By the fire, Sartre and de Beauvoir would sit separately, yet together, as Sartre worked on Being and Nothingness while an obliging waiter connected the two philosophers through the medium of coffee.

Crisp-shirted waiters still deliver coffee to your table today. With your eyes closed, the murmurs of French and the quiet tapping of white cups against saucers conjure images of the philosophers of the bygone days. And the ghosts of the Existentialists do still remain: in keeping with its tradition, discussions at the ‘philo-café’ are held upstairs on the first Wednesday of the month, from 7pm to 9pm.

Ernest Hemingway was not averse to dropping in at the Flore either, at times using it as his own personal office. Other English-speaking writers, such as Truman Capote and Lawrence Durrell, frequented the place too. After 1945, Picasso could also be found at the Café de Flore. For long evenings, he sat with his Spanish friends at the second table in front of the door. In Paris was Yesterday, Janet Flanner writes that, “Everyone respected the isolation he established for himself there. Although most of the bar was trying not to look directly at him.” 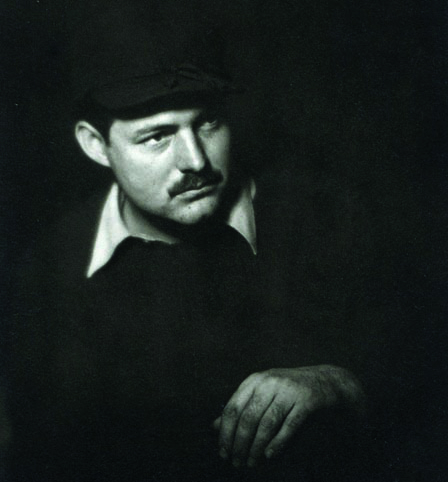 This landmark café is still noted for people-watching, especially from the tables on the terrace, where you can see and be seen.

The menu is very similar in tone, taste – and price – to that of the Deux Magots. The cold buffet, salads and sandwiches are the order of the day. After the salade Colette with its virtuous romaine, prawns and grapefruit, the Coupe Melba (vanilla ice cream combined with the requisite peaches and crowned with currant jelly, crème Chantilly and almonds) is worth the expense, both in euros and calories.

Like the Prix des Deux Magots, which has been awarded by that café since 1933 for less-conventional fiction, the Café de Flore has handed out an annual literary prize since 1994. The Prix de Flore goes to promising young authors of French-language literature. Besides a cash prize, the winner is treated to a glass of Pouilly-Fumé at the café every day for a year.

Previous Article Book Reviews: Paris, Portrait of a City
Next Article The Most Iconic Sites of Nord-Pas de Calais