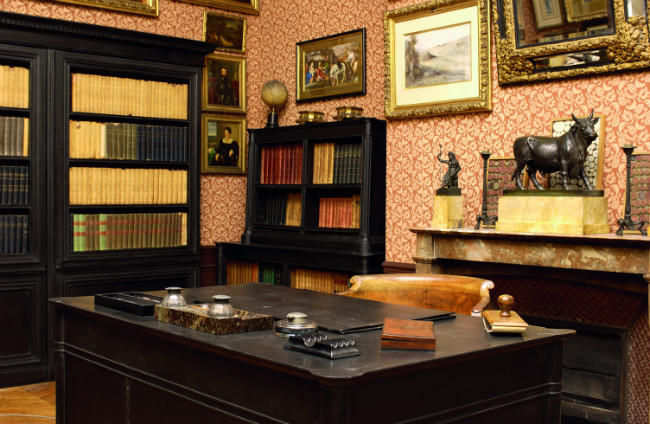 For decades I’ve been urging readers to explore the little-known neighbourhood of La Nouvelle Athènes in the 9th arrondissement of Paris. Even now, when Paris holds fewer secrets, the area remains delightfully uncrowded, blissfully free of high-rises and concrete, largely untouched by the erosion of time. The understated architectural harmony and the leafy courtyards are the legacy of the 19th century, when this was the heartland of arty Paris, of the Romantic movement to start with (witness the Musée de la Vie Romantique).

Unlike the homes of his peers – Delacroix, Ingres, Chopin, George Sand… – the house of the Symbolist painter Gustave Moreau has survived as it was when he died in 1898, the only home I can think of that was turned into a museum during the lifetime of its occupier, at his own initiative moreover. It was his “dearest wish to keep his artwork together so as to allow the artist’s work and efforts during his lifetime to be appraised.” This was not the whim of an old man at the twilight of his life. Back on Christmas Eve 1862, Moreau had already scribbled his concern about the future of his collection on one of his drawings. Were such thoughts on his mind because of his father’s death that year? Whatever the reason, he was only 36. 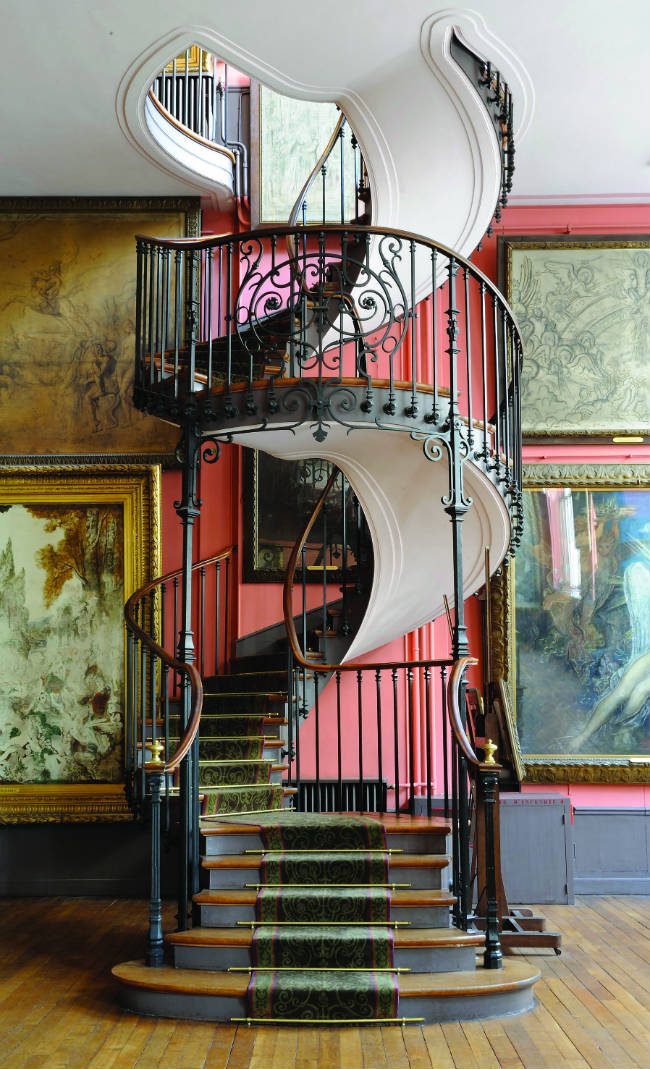 The idea materialised in 1895, but converting the modest family home into a museum required the help of an architect, Albert Lafon. The house had been bought in 1852 by Moreau’s parents on their son’s behalf. All three shared the first floor until their passing (his mother in 1884). Moreau’s studio was set up on the floor above; the ground floor was let out. Standing on an 80sqm plot, the house was way too small for its future purpose. Space was gained by doing away with the front garden and aligning the house with the street, but there was no available space elsewhere other than vertically. So a studio/gallery was added above the lower studio, and a steep spiral staircase leading to it. Recently, more space has been created in the basement, allocated to researchers.

In 1897, Moreau donated his future museum and its content to the state, who declined the offer. (George Sand’s granddaughter met with the same refusal – museums are costly!) It took four years, and Moreau’s personal financial contribution, for the state to reconsider. Meanwhile, Moreau pursued the refurbishment of the museum single-handedly, from the conception, the arrangement and choice of wallpaper to the design of furniture to accommodate some of his artwork, taking charge of the hanging or filing of each. Bearing in mind that his collection contained 25,000 pieces, let alone that he was an old man, one is overwhelmed. 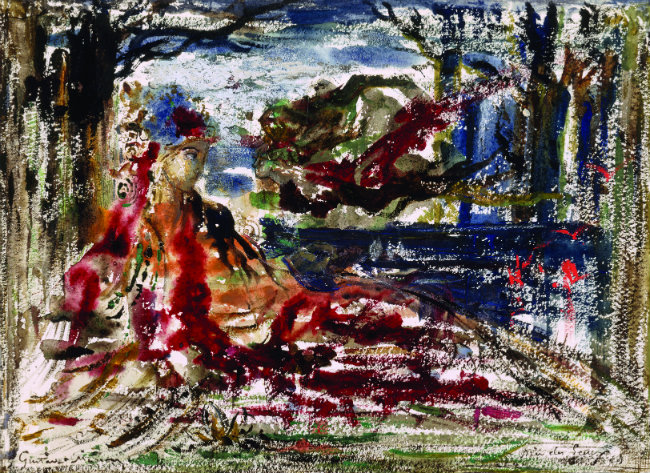 Coming here provides a unique opportunity to view the bulk of an artist’s work, on the site where he created it and displayed by him. Marcel Proust sensed this when he came in 1898. This was after Moreau’s death, which was of little consequence. It was the artist’s soul that Proust came for. It inhabited the place even while the project was still under way, overseen by Moreau’s friend and legatee, Henri Rupp, according to his mentor’s instructions. Proust saw in the place a sanctuary. André Breton likened it to a temple. He discovered it in 1912, aged 16, coming from his home at 42 Rue Fontaine – it had been open to the public since 1903. 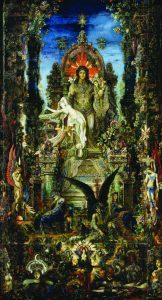 “I have always dreamt of breaking into it at night with a lantern,” he said. It was Moreau’s mythical women that blew him away – Sémélé, Dalila, Salomé… the inaccessible Fée aux griffons (the fairy with the griffins) especially. The upper gallery has retained the atmosphere of both a sanctuary and of an awe-inspiring nave due to its high ceiling. The wall space is lined with pictures from floor to ceiling, like devotional icons. Often drawn from Biblical or mythological stories, their dreamed-up landscapes later led Breton to Surrealism.

The recently opened ground floor apartment was occupied by Henri Rupp when Moreau died. After being used for many years by the museum’s administration, the apartment has recently been restored to its original function as the exhibition space intended by Moreau. This much was indicated in a note he left, which also said that he had started sorting out the pieces he wished to have there. To gain space, Moreau resorted to an ingenious design of cupboards fitted with multiple doors covered with his work that open up like books. Unfortunately, they are seldom accessible to visitors. 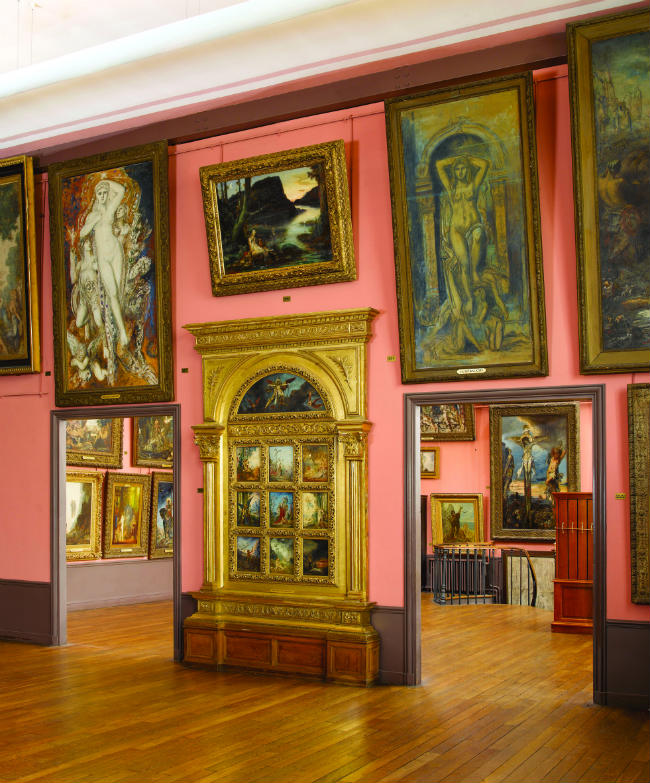 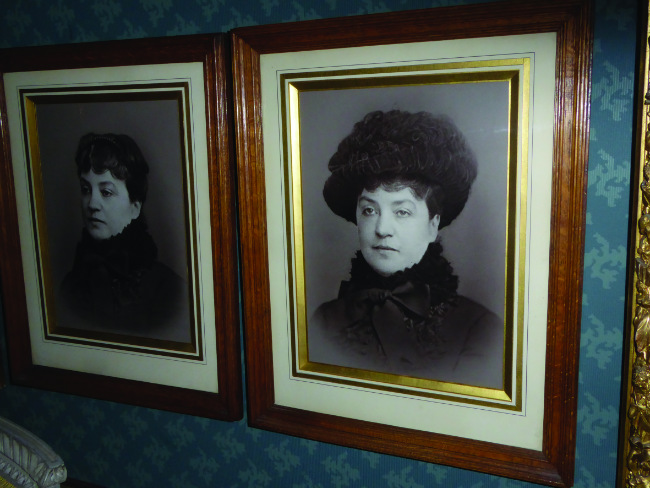 Among the works displayed here are the copies he made of the great masters of Italy, for whose sake he had travelled to Italy, as was customary among aspiring artists in the 19th century. It was on his return from his first journey there, in 1862, that he painted the magnificent Chemin de Croix series for the church of Notre Dame in the unlikely remote mining town of Decazeville, the only Symbolist paintings on that theme in the world. Imbued in the warm colours of the Italian Renaissance, which he had discovered not long before in situ, he painted the series anonymously and they remained unknown until 1964, although Proust did mention them in his novel Jean Santeuil. A wonderful colourist, he would later have much influence on his students and future Fauvist painters, Henri Matisse and Albert Marquet – and on Georges Rouault above all, who became the first curator of the museum following Henri Rupp’s death, in 1918.

The first floor apartment was remodelled by Moreau into “a sentimental museum”, his late mother’s room altogether demolished to make room for the celebration of those dear to his heart, his mother not least. His own room became the “boudoir”, dedicated to the memory of Alexandrine Dureux, “My unique and best friend,” who died prematurely in 1890, and for whom he painted Orphée sur la tombe d’Eurydice.

For more information about the museum, visit: en.musee-moreau.fr. Open every day except Tuesday. Closed for lunch on Monday, Wednesday, and Thursday. Full ticket price is 6 euros. 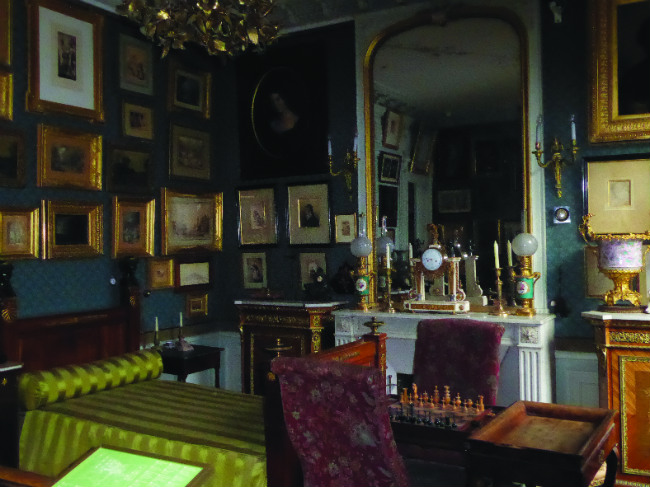 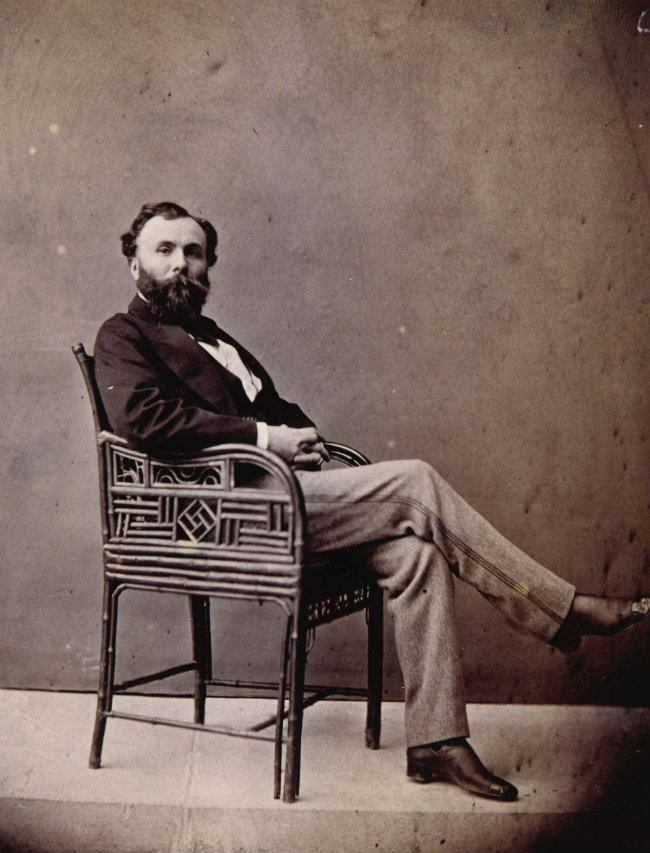 Previous Article How to Enjoy the Euro 2016 in Paris
Next Article Restaurants in Central Paris: AG Les Halles