Fine Dining in Paris: L’Écrin at the Hôtel de Crillon 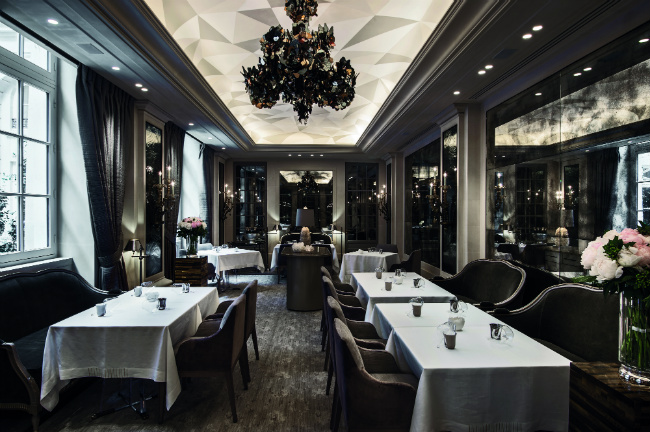 Chef Christopher Hache, 36, had a major gastronomic challenge in front of him when he returned from a two-year sabbatical and relaunched the restaurant at the iconic Hôtel de Crillon in the 8th arrondissement of Paris last summer.

Hache, who arrived at the hotel’s restaurant Les Ambassadeurs following the departure of Michelin two-star chef Jean-François Piège, had previously won a Michelin star here for suave dishes like morel mushrooms stuffed with Iberian ham in hazelnut foam and ormeaux (conch) – rare crustaceans fished in the waters off the Channel Islands and here prepared à la meunière with oyster tartare and a surprisingly flattering cauliflower jus that tempered this iodine-rich dish with some earthy base notes. But in reality he had barely settled in before the hotel was closed for a complete renovation.

Earmarked by the hotel’s management for its culinary future, Hache embarked on a series of guest stints with chefs in a variety of restaurants that ranged from Thomas Keller at the French Laundry and Christopher Kostow at the Restaurant at Meadowood, both in the Napa Valley in California, to Dan Barber at Blue Hill in New York City, Shuzo Kishida at Quintessence in Japan, and several restaurants in South America. 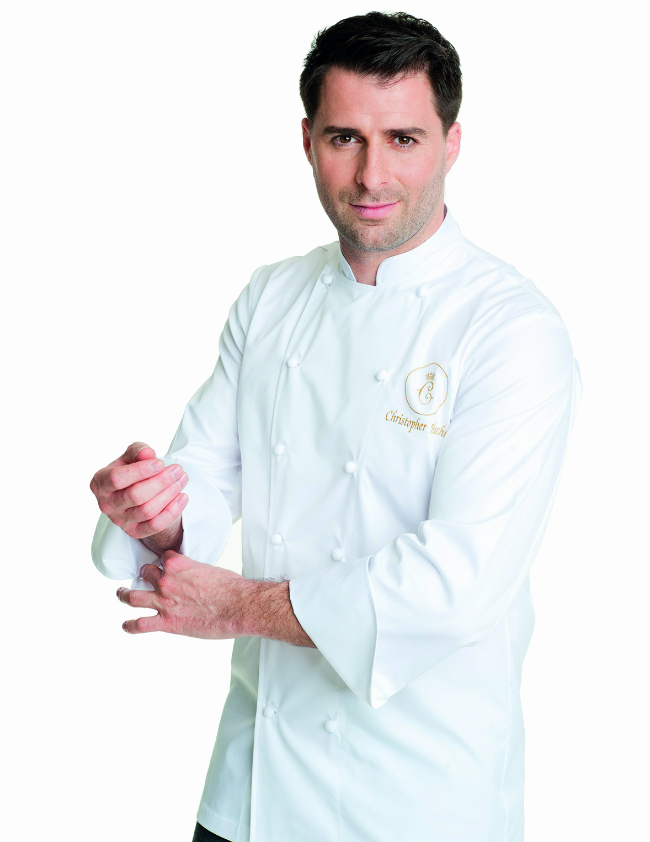 “I felt that it was important for me to broaden my horizons as I meditated on the invention of a new restaurant for the Hôtel de Crillon,” said the chef, whose grandmother ran an auberge, whose father runs a restaurant in suburban Paris, and whose taste for globe-trotting dates back to the trips he took with his mother, a stewardess for Air France, when he was a child. “I wanted to create a new style of French haute cuisine for a new era, a restaurant that would surprise and amuse and challenge a clientele which has been to many of the world’s great restaurants.”

Among the many lessons he learned on his recent gastronomic odyssey, two stood out. “The veneration of fresh seasonal produce by certain American chefs is truly inspiring. Many of them have their own gardens and farms, so their menus change almost daily according to what is harvested every morning. And in the kitchen, this produce is cooked in ways that respect its natural tastes and beauty. Then, in Japan, I learned the nuances of temperature on cooking different products and a variety of other technical skills that preserve and enhance the taste of various products,” he explained.

Heading here for dinner the other night, I thought back to a succession of superb meals cooked at the Crillon by chefs Christian Constant and Jean-François Piège and wondered if Hache could approach their Olympian level of culinary distinction.

For those who don’t know them, Christian Constant trained a generation of young chefs, including Yves Camdeborde, who founded the modern bistro movement, and Éric Fréchon, the Michelin three-star chef of L’Épicure at the Hôtel Le Bristol before he left to open several restaurants of his own in the 7th arrondissement. Piège succeeded Constant, and today has an eponymous Michelin two-star restaurant, two stylish restaurants – Clover and Clover Grill – and recently opened his new version of La Poule au Pot, the legendary restaurant in Les Halles he acquired. 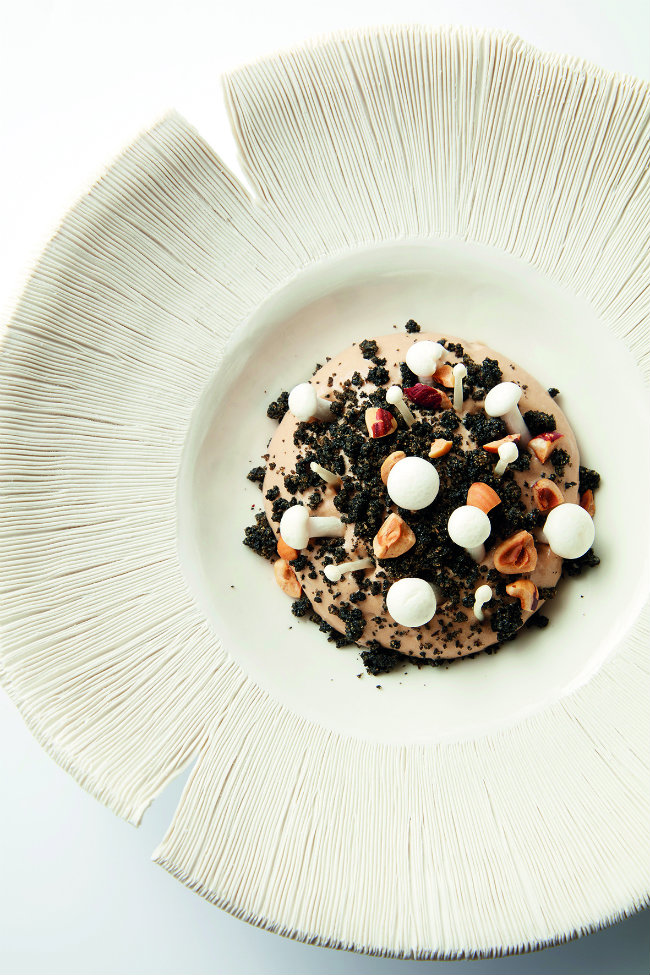 The biggest change for anyone who knew Les Ambassadeurs in the past, however, is that it is no more. The stunning room with landmarked frescoes puckishly depicting cherubim building Ange-Jacques Gabriel’s magnificent 1758 mansion may still be called Les Ambassadeurs, but it has become the hotel’s bar, and the Crillon’s haute-cuisine restaurant has been moved to a smaller salon overlooking a garden courtyard and renamed L’Écrin.

A bar with a disco soundtrack in one of the most beautiful rooms in France overlooking the Place de la Concorde struck me as incongruous – to put it politely – but hidden away through a side door zealously guarded by lobby attendants like the entrance to a private speakeasy, L’Écrin, decidedly contemporary and mostly done in tones of steel and dove grey, is a handsome and intimate space in which to embark on one of Hache’s two brilliant tasting menus. There is no à la carte menu here. Mind you, this is special-occasion food, which is why it’s open for dinner only and welcomes fewer than 30 people at a service.

But with its two menus hang-tagged a €260 and €190 (the infelicitously named “beverage experience”, or drinks pairing, with these two meals runs to €130 and €95 respectively), well, suffice it to say that in terms of what you can drop on a haute-cuisine meal in Paris these days, these prices are – shock, horror – actually really rather reasonable. And if you’re keen for cooking that is witty, light, new, fresh and politely sensual, you might really like this place, especially since the service provided is so relentlessly charming.

What Hache really understands deeply is that meals in such restaurants are less about eating than about ceremony and elaborately declined rites of pleasure, and here L’Écrin is flawless. The cooking, though, is lovely too, including dishes like a winsome haiku-slugged dish entitled Champignons de Paris, Terre, (button mushrooms, earth), a small patch of fragile white fungi sprouting mushroom-infused cream; a delicate composition of crayfish and green asparagus; homemade boudin blanc; and sole stuffed with steamed lettuce.

Lest you think this all sounds rather safe and polite, Hache plays a joker now and again, too, including a dish of chilled lamb’s brains in a shimmering aspic with potato purée. For an international audience of privileged people, most of whom aren’t French, lamb’s brain is a rather audacious thing to include in a luxury tasting menu, and that’s exactly the point.

“I don’t want people to be lulled by the familiar, I want them to be challenged and charmed by things they’ve never eaten before,” said Hache. (That said, the brains can be omitted from this gastronomic journey for anyone who isn’t feeling offal).

So, should you go? Yes or no? Most definitely yes, since this is exquisitely refined cooking with a politely iconoclastic edge, and it’s a very charming experience to boot.

Previous Article Great French Destinations: Raise a Glass to Gironde
Next Article Guide to the Stars: A Potted History of the Michelin Guide