My Life in Paris: The Perfect Valentine’s Day at the City’s Oldest Cinema 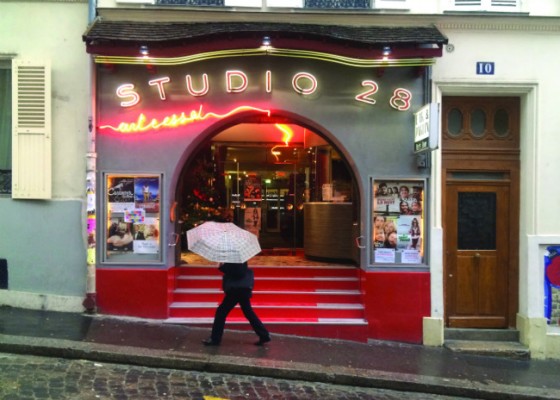 Fully embracing Oscar Wilde’s philosophy that “To love oneself is the beginning of a lifelong romance”, I started planning my picture-perfect, cinematic Saint-Valentine’s Day celebration months ago. ’Tis the season!

Act 1: Getting ready for my close-up, Mr DeMille, I first made a beeline to my neighbourhood pharmacist to stock up on beaucoup bars of honey-based soaps, creams and lotions. Is there a beauty glitch or hiccup that can’t be fixed at the pharmacy? I don’t think so. Mirror, mirror on the wall, my eyes have seen the glory – if I squint, that is…

Act 2: Channelling Jean Seberg’s budding journalist character in Jean-Luc Godard’s classic 1960 film, À Bout de Soufflé (Breathless), I next scouted and purchased a vintage dress in yellow and white stripes, along with a pair of black sunglasses, kitten heels and kid gloves – of course. “New York Herald Tribune! New York Herald Tribune!” I shouted to my cat, as I grabbed my ballpoint pen and paper with the ease of a jump-cut. Speed dialling “M” (for marvellous), I got Alain Roulleau on the horn. He’s the second generation of a family dynasty that’s run the Studio 28 cinema since the late 1940s – soon his sons will take charge. “Cher Monsieur,” I said, with a slight quiver in my voice and butterflies in my gut, “What will you be showing on Saint-Valentine’s Day? Hopeless romantics like me need to know…”

Declaration of transcendence: whenever I’m in need of a lift, I head to Studio 28 in Montmartre, the oldest continuously operating cinema in Paris and another one of my mojo-revivers. Red velvet abounds and, under a large set of surrealist light fixtures by Jean Cocteau, I’ve seen such classics as Rebel Without a Cause, East of Eden, and Double Indemnity. Now I’m holding my breath for the Valentine’s week Audrey Hepburn mini-festival that Monsieur Roulleau promised. Romance is in the air, just like on the screen!

With only 170 seats and ten screenings per week, Studio 28 has earned a special place in the annals of cinema. Founded in 1928 – hence the name – it immediately carved a place in history as the world’s first avant-garde art theatre, showing films by Abel Gance in ‘Polyvision’, a wide-screen technique involving three synchronised projectors.

In 1930, Studio 28’s fame was secured when it premiered one of the first surrealist films, Salvador Dali and Luis Buñuel’s L’Age d’Or (The Golden Age). Anaïs Nin and Henry Miller went to see it, and afterwards the latter praised the film as “pure cinema and nothing but cinema”.

However, others were upset by its sacrilegious symbolism and attacked the theatre, throwing ink on the screen and destroying an art display that included works by Dali, Man Ray, Yves Tanguy, Miró and Max Ernst (who also starred in L’Age d’Or). After that, Studio 28 took a lighter approach and introduced France to comedies by Ernest Lubitsch, the Marx Brothers, WC Fields and Frank Capra.

Cinema 28 is also where Audrey Tautou’s “Amélie Poulain” character headed every Friday. I’m not surprised. As Roulleau put it, this is a theatre with a soul – that of the old village of Montmartre. Like Marie Antoinette used to say about the Opéra, “Ici, je suis moi.” At the movie house, I’m passionately free to be saintly me but I can also be Anna Karina, Jeanne Moreau, Brigitte Bardot, Catherine Deneuve, Audrey Hepburn and Jean Seberg for a few hours, sometimes longer.

I can’t tell you how many times I’ve re-enacted the final chase scene in Breathless during my training runs.

What’s my greatest ambition? To become immortal, and then, well, not die but sigh – at the cinema, of course. Fin.