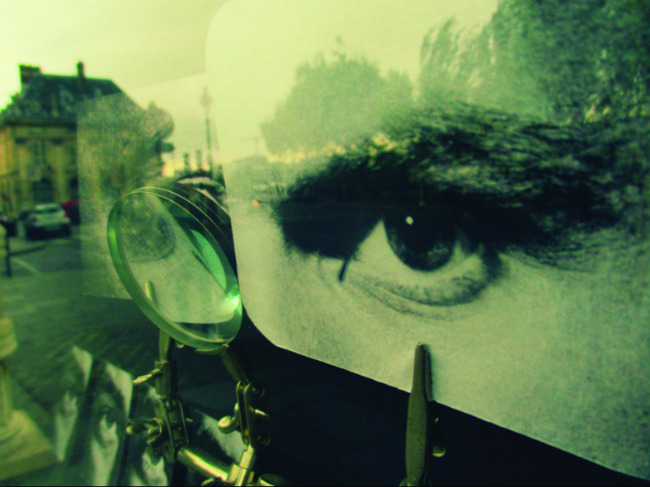 With my eyebrows on fleek, I’ve been on the hunt for the fantastical. Suited with waterproof shoes, a parapluie, and sponge-like senses, I’ve been striving to capture the heady, surreal sensation of experiencing the Parisian cityscape as if for the very first time.

I focused. I opened my eyes more. Seeking what Jean Cocteau called, “true realism,” I squinted – and daydreamed, too. With slow, sinuous, octopus-like moves, I followed the poet’s recipe to a T, adding more than a splash of transcendence in order to discover “surprising things which habit keeps covered and prevents us from seeing.”

I walked new rues and rode unfamiliar bus routes, often to the end of the line, while peering through my sea-foam-tinted pince-nez spectacles.

I baked 33 batches of les chouquettes from scratch. I saved a toy kitten from a fountain. I stepped, stepped to a dope Renaissance beat. I biked. I boxed. I saw tigers and clouds in my coffee-flavoured Dieu du Ciel Pénombre beer, after bumping into Henri Rousseau’s spirit, lost in the Jardin des Plantes.

But still, still inside me, swirling deep, was a single burning question: is it possible to buy too many woollen body stockings? Always one to revel in an old-spool revival, I think not.

Strutting to the chase: I recently sought shelter in Notre Dame’s packed-to-the-gills gift shop during a rain shower. Nonetheless, I was utterly in heaven. As I held my ground at the candle counter, the bells began to peal. “Be more like Victor Hugo!” intoned Jean-Marie, Maurice, Benoît-Joseph, Marcel, Anne-Geneviève, Denis, Gabriel, Marie and 13-tonne Emmanuel. All the named bells were speaking to me.

“Ring it!” I told these great bells of fire, channelling my inner Quasimodo. After all, we do have Victor’s keen vision to thank for the cathedral’s divine renovation, which followed the 1831 publication of Notre-Dame de Paris. A “vast symphony in stone” he cooed, jump-starting the sightseeing frenzy and inspiring mobs of visiting fans to pay homage with copies of his book in hand.

Plus, according to the tell-all book by his wife, Adèle, Victor had beaucoup tricks to help him stay focused while writing. I made a list and checked it thrice – starting with one vintage body stocking, miraculously scored right off the bat at a Paris flea.

That’s right. While diving into a book project with a rigid deadline, Hugo not only donned a “coarse knit garment of grey wool, which enveloped him from neck to toe,” but also hid his keys and fancy duds so he wouldn’t be tempted to leave the house.

I’ve certainly been there. And now, with the newly acquired body stocking in the bag, I’m already feeling the first twinges of a Victor Hugo-like process brewing deep down inside me.

Ink is next on my list. Book projects at Chez Hugo were typically launched with a new bottle of encré. He did it for luck, some say. The prolific writer also commissioned J. Herbin to create special fast-drying ink. About a decade ago, the 346-year-old company found the formula in their archives and re-created it.

Immediately, I get to the sleuthing, only to find out that the limited Hugo edition is no longer available for sale. “Finished!” the J. Herbin headquarters tells me.

Though my objet du désir seems to bolt, I somehow manage to find one of the last surviving bottles – thanks to Karen, my ink guru friend. And let me tell you, the ink is thick and glossy, like my tresses on a swell day. At full tilt, in no time, I’m composing tales of swagger at breakneck speed with my little quill.

Completely tickled, I also splurge on a bottle of their invisible ink – a pet secret weapon of Marie Antoinette. Because, as Monsieur Hugo once wrote, “There is nothing like a dream to create a future!” Deadlines: hear me soar!