My Life in Paris: Of Spies and Cheese 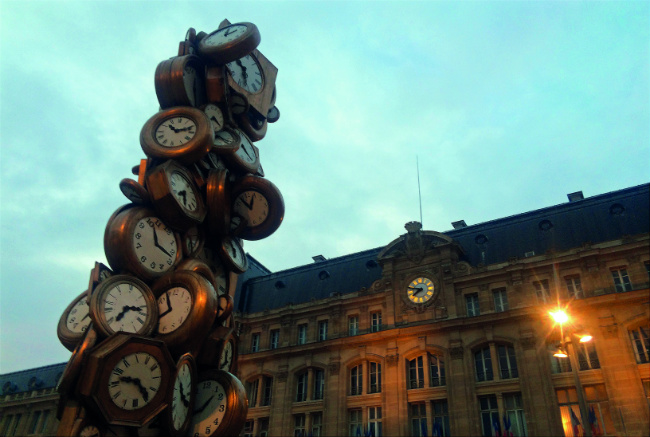 This is Gare Saint-Lazare on rue Amsterdam, a favourite subject for Monet and Manet. It’s the second busiest train station in Paris; always buzzing with commuters, sightseers, street musicians, produce vendors, and – inevitably – petty thieves. It’s about 7 o’clock in the evening.

That’s me, taking the escalator down to the Métro 12 line. I love nights like this when nothing gets between your blood and the city’s cacophony. The noise of honking taxis. The sound of high heels click-clacking. The wail of the lone cello player. The strum of a guitarist. The rustling of shopping bags colliding with turnstiles. The squeal of train brakes. And, above it all, the hawkers with their loud, rhythmic songs touting their roses, fruits, and vegetables.

A pickpocket is about to strike, but I don’t know it yet. Feeling at one with the city’s soundscape, I’ve got my mind on WWII Allied spy Virginia Hall.

You see, recently, the International Spy Museum told me about a new acquisition: Virginia’s suitcase. Containing a Type 3 Mark II transceiver, it’s the case she carried through this very station in 1944. Disguised as an elderly woman, the thirty-something, red-haired agent was catching a train from Paris to a farmhouse in Crozant. At the time, Virginia was working for the British Special Operations Executive and the American Of ce of Strategic Services. One of the first female spies sent to France, her responsibilities included dispatching intelligence reports and synchronising parachute drops – after days spent cooking meals and tending cows in their pastures.

She also crafted cheese. Yes, Virginia not only made the village’s best fromage, but also sold it to nearby German soldiers, once they had recognised her distinctive moulds during an impromptu farmhouse raid. Amazingly, they only found the cheese, and not the hidden 13kg green leather suitcase with its radio and Morse keys.

Mulling over Virginia’s feats as I prepare to leave the escalator, I feel a hard tug. Spinning around, I nearly fall, but somehow manage to hold on to both handrail and handbag.

“My bag!” I shout at the thief as he keeps yanking. Finally, failing to prise its handles from my hands, he quits and runs.

I stand in my tracks, replaying the scene. Months back, we were introduced. The bag and I, that is. I was rolling along rue Tronchet towards a hairdo engagement when I spied a blue tote with bewitching cat eyes. “Buy me!” she beckoned. Without hesitation, I flew up the stairs in one leap and bound. I could practically hear the cash register a-ringing. Making my entrance, I pounced.

“No! No! No!” cried a voice from somewhere up in the floor-to-ceiling cubbyholes.

“No?” I asked. Squinting in the bright lights, I spotted the sales assistant, Marie, balancing on the top rung of a wooden ladder. “No! You need a bag with long handles! Thief-proof handles!”

“Hands-free, yes?” She understood me well. Marie plucked a plump, plum-coloured bag from one of the cubbies and nestled it in her arms as she made her descent.

“Voilà! Five studded feet on her bottom, flawless – and she’ll get better-looking every year,” she said resting the handles on the crook of my arm.

A Longchamp. According to my sac à main whisperer, they created the Cosmos line as a nod to international collaborations. In fact, their advertisements featured Kate Moss rendez-vous’ing with French actor Gaspard Ulliel at the Café de Flore. I struck a pose for Marie. She laughed.

“Fashioned for the careless woman – like you and Kate!” I think she meant “carefree”, but I accepted both – the bag and the compliment. Because a bag is never just a bag.

And now, after reporting the pickpocket incident to the police, I charge onto the Métro once again. With Cosmos still at my side and her strong straps still arching over my shoulder, I not so briefly pause, revelling in the babel of languages all around me. Perhaps I’ll even stop by a fromagerie to celebrate – a mission the unflappable Virginia would surely have approved of.