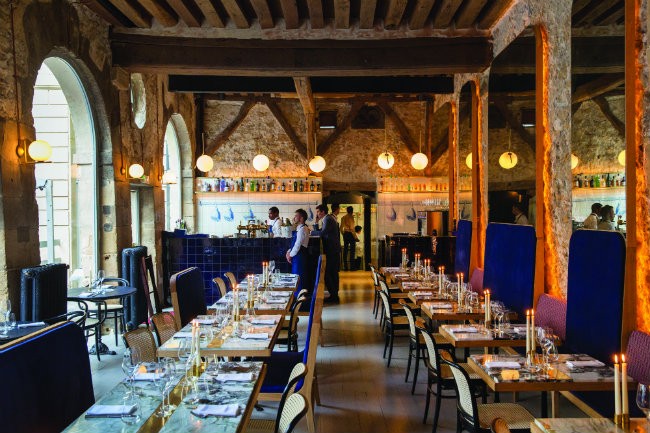 This brasserie was opened this past summer by Mauro Colagreco – the Argentine-born chef from Menton who holds two Michelin stars at his Mirazur restaurant, and whom I think is one of France’s greatest culinary talents. It was just the restaurant that the Marais quartier had been waiting for. It boasts a charming setting, complete with a cobbled courtyard, in the former premises of an 18th-century coaching inn once known as the Aigle d’Or (Golden Eagle). The menu features beautifully made contemporary French comfort food and there’s terrace seating when the weather allows. The service is attentive and charming, and the cosmopolitan crowd makes for good people-watching.

Colagreco placed young Rafael Gomes in the kitchen here, and it was excellent casting, since the Brazilian-born chef possesses a surprisingly intuitive understanding of what stylish Parisians like to eat when they go out for a meal in this part of the city. To wit, they don’t want formal or fussy food, because they’re out for a good time. Perhaps it’s Gomes’s previous high-low experience – which includes stints in the kitchen at elegant, gastronomically eminent Eleven Madison Park in New York, and working as the cook on an Alaskan fishing trawler – that’s made him so keenly able to perceive the appetite of any given crowd.

Gomes and Colagreco collaborate on the menu, which evolves constantly. It features such starters as squid salad with pickled carrots and onions on a bed of frisée with toasted pine nuts; grilled razor shell clams with Provençal herb butter; and octopus carpaccio with finely sliced radishes and citrus fruit.

The main courses include an excellent fish soup, grilled sea bass with caponata and one of the best steak tartares to be found anywhere in Paris. Finish up with the crème caramel with dulche de leche, or maybe the peach Melba.

Previous Article Domaine de Verchant: Where to Stay in Montpellier
Next Article Reviewed: How the French Think by Sudhir Hazareesingh