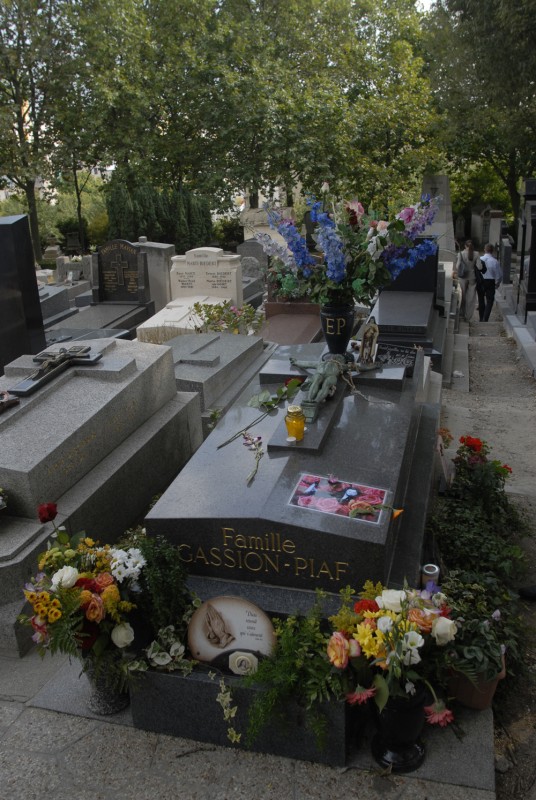 It may not be everyone’s pick of a Paris park, but Père Lachaise cemetery, located on a 108-acre spread on the eastern edge of Paris, is a fascinating walk through history.

A must-see cemetery? The idea may seem odd. But this is not your usual burial ground. It is the permanent resting place for some one million souls, among them international writers, musicians, artists and politicians who lived or died in Paris—including writer and art collector Gertrude Stein, dancer Isadora Duncan, scandalous Irish author and playwright Oscar Wilde, and Franco-Polish composer Frédéric Chopin. And also, of course, Jim Morrison of the Doors, whose grave has become a pop music shrine.

But the cemetery is also a powerful, often moving witness to those whose names are little known or lost: on the Avenue Circulaire, monuments to the Nazi victims at Buchenwald, Mauthausen and other concentration camps face the Mur des Fédérés, where 147 insurgents were lined up and shot during the uprising of the Paris Commune in 1871, and buried on the spot in a communal grave.

I visit Père Lachaise regularly, a few times a week, either for a leisurely stroll or as a convenient shortcut to the Métro, since it’s barely a five-minute walk from my apartment near the Place Gambetta, a working class neighborhood that is becoming increasingly bobo (bourgeois bohemian). And every time I walk through, I discover something new.

The Père Lachaise cemetery was founded in 1804, when the need for a new Parisian burial ground became urgent for reasons of space and hygiene. Nicolas Frochot, the first Prefect of the Seine département, was ordered by Napoleon to purchase a plot of hilly land in the east of Paris originally inhabited by a community of retired Jesuit priests, notably Louis XIV’s confessor Father François d’Aix de La Chaise, for whom the cemetery is named. (Oddly enough, Père Lachaise is not buried in the eponymous cemetery but in the Saint Paul-Saint Louis church in the Marais district.)

Parisians shunned the new graveyard until Frochot, in an astute move, arranged for the reburial there of the revered 17th-century French playwright Molière (Jean-Baptiste Poquelin) and his contemporary, Jean de La Fontaine, author of the famous fables. There is some question about whether or not their remains are actually there, but in any case Père Lachaise cemetery suddenly became the chic place to spend eternity, and it remains so today.

A theater of illusion

As you walk down the streets of the buzzing multi-ethnic neighborhood that surrounds the park-like cemetery, it’s hard to imagine that when it was created, this was the faraway countryside of Paris, dotted with vineyards and châteaux.

Once you’ve stepped off the busy street and entered the cemetery, though, quiet reigns. With its cobblestoned pavement, plethora of benches and some 5,000 trees, it’s a lovely and peaceful place to walk. In fall it’s incredibly romantic, in spring poetic and in summer filled with tourists. But even on a cold, dark winter day when the trees are stripped bare and the dominant color is gray, Père Lachaise escapes gloom. That’s no accident, says guide Bertrand Beyern, whose knowledge of the cemetery is so extensive that the French daily Libération nicknamed him the fils Lachaise. A cemetery, he says, is designed to be a “theater of illusion” where the dead “sleep”.

With the elegant family chapel tombs of wealthy 19th-century bourgeois lining the cemetery’s 60-odd miles of cobbled lanes, an array of sculptures of varying artistic merit—some of them extremely good—and epitaphs ranging from the poignant to the frankly hilarious (“wait a long time” is the message from one merry widower to his deceased spouse), the illusion is clearly a success for the two and a half million people who visit the cemetery each year seeking the story behind every stone.

Those stories aren’t always evident the first time around: It was only after several visits to Oscar Wilde’s lipstick-covered tomb that I learned he’s not alone in it. Next to him, in an urn, are the ashes of his friend Robert Baldwin Ross, whose name is not mentioned on the monument. It was Ross who commissioned the tomb, sculpted by Jacob Epstein, adorned with a stylized angel in a combination of Egyptian and Art Deco style. The sculpture was originally as scandalous as Wilde had been, with dangling genitalia long since broken off.

That’s just one story out of thousands here, and a valid reason to take along a map and a good guidebook, or sign up for a tour with Beyern or one of the cemetery’s other knowledgeable guides.

Some people call Père Lachaise une ville dans la ville, and with its well-organized streets and street signs indicating the various divisions, in many ways it does indeed resemble a small town. As in a real town, there’s a mix: of nationalities, of the rich and the poor, the conventional and the weird, the famous and the totally unknown. What many don’t realize, says Beyern, is that Père Lachaise is not just a museum park but also still a much in demand burial place where funerals are held several times a week. Many tourists follow the corteges of mourners, thinking that the newly

deceased surely must be famous. When they run to ask Beyern who’s being buried, his reply is always the same: “the one at the head of the line”.

Among the cemetery’s fascinating lesser-known denizens is Hippolyte Léon Denizard Rivail, more popularly called Allan Kardec—the name of the druid that this professor-turned-spiritist claimed to have been in a former life. Kardec, the author of The Book of Spirits, has a steady and devoted following of admirers who keep his tomb awash in flowers. Many place their hands on the granite dolmen in hopes of communicating with their departed loved ones. A largely ignored notice posted by the City of Paris, which owns and runs the cemetery, informs the public that Kardec never advocated this practice. Beware—any loud talking, inquisitive or skeptical looks on your part as you pass by will be greeted by the cold and hostile glares of Kardec’s faithful followers.

Another tomb where a lot of touching goes on is that of Victor Noir, a 21-year-old journalist whose assassination in 1870 by Prince Pierre Bonaparte, a cousin of Napoleon III, sparked anti-imperial demonstrations. French sculptor Aimé-Jules Dalou’s remarkable recumbent likeness of the young man graphically emphasizes the young man’s virility—so graphically that it was said that if a young woman wanted to get pregnant all she had to do was touch the statue’s (not very) private parts. So many giggling girls have done so that the bronze had to be restored a few years ago.

But Père Lachaise is a place where it’s not strange to be strange. Au contraire. Fascinated by Egypt, 61-year-old Paris pharmacist Jean-Louis Sacchet has spent the last few years actively preparing for his passage into the hereafter. It took him four years to build his personal pyramid in the Père Lachaise; he now spends his spare time decorating the crypt with frescoes and hieroglyphics. He will be mummifed (“I don’t want my friends to come to the cemetery and imagine me bathing in my juice,” he told Libération) and is worried that his embalmer, who is his own age, will pre-decease him.

The price of admission

At closing time, the guards, on foot or motorized bikes, using clanging bells and their own stentorian voices, make enough racket to rid the park of the living. By nightfall the cemetery returns to silence, peopled only by the dead. Or maybe not. Rumor has it that it’s peopled by partygoers of all sorts who sneak in for midnight fêtes, but when I asked a guard about that, the only answer I got was a stony stare.

Burial in this prestigious cemetery carries a price tag of precisely €11,532.58 for a 21 square-foot plot—roughly comparable to the price per square foot of an apartment in the surrounding neighborhood. Supposing money’s no object, all you need to be admitted is to be a resident of Paris, or die in the city. And be patient: for the moment there’s not one available place. Nicolas Frochot would be proud.

A word to the wise: Père Lachaise, located in the 20th arrondissement, has two entrances. The main one is on the Boulevard Ménilmontant, near Métro Père Lachaise. The second is on the rue des Rondeaux, Métro Gambetta. Opening hours: weekdays 8 am-6 pm; weekends, opens Sat at 8:30 am, Sun and holidays at 9 am.

Originally published in the April 2010 issue of France Today; updated in August 2012