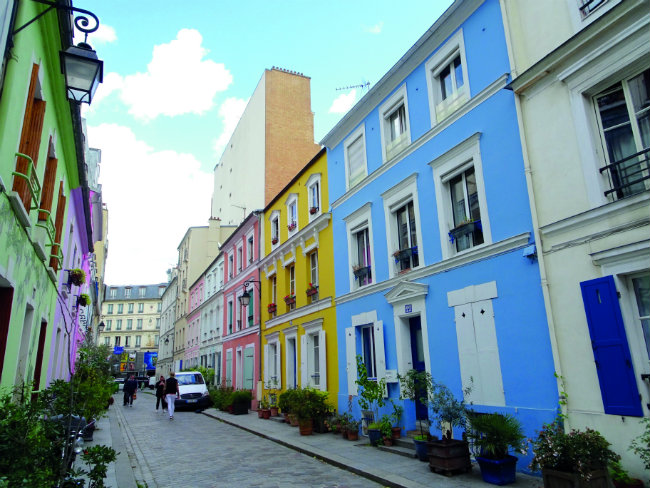 Possibly one of the most Instagrammed spots in Paris, the colourful Rue Crémieux, with its rainbow of pastel-hued townhouses is the French capital’s answer to Notting Hill. This charming little street in the 12th arrondissement, near the Gare de Lyon, has no shops or salient landmarks, just private homes. So how did this tiny rue become so iconic – and get its distinctive look?

Well, it seems its residents simply got together and decided to paint their homes in every shade of l’arc-en-ciel. As for the street’s moniker, as you’ve already gathered it has nothing to do with colour, rainbows or the like. It was named after the lawyer, journalist and writer Gaston Crémieux in 1897. A champion for the poor and disadvantaged, he led the Marseille Commune riots, mirroring the uprising in Paris of the same name.

Crémieux was sentenced to death, but his legacy lived on and his courage celebrated in literature by Victor Hugo and Jean Jaurès. Before becoming Rue Crémieux, the street was called Avenue Millaud, after the founder of Le Petit Journal, at one time the leading newspaper in France. So next time you are strolling through the 12th, by all means stop to capture this picture-perfect street. Just remember this is not a tourist attraction – people live here.

Previous Article Where Stars Slumber: A Duo of Barrière Hotels
Next Article Film Reviews: Based on a True Story, Directed by Roman Polanski