In Today’s Fashion World, It’s About the Street Model 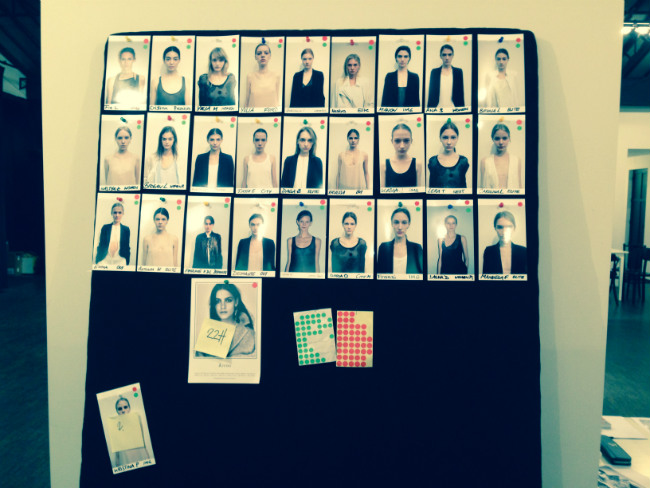 It’s the fall fashion season in New York, London, Milan and Paris. From these four cities comes the worldwide influence of fashion’s “looks.” Stories and photos of hot trends are everywhere, from international newspapers to the 800-page September issue of Vogue (US) that weighs four pounds.

While we look at the clothes, shoes and accessories, it’s the model wearing the goods that inspires and influences the look and feel of fashion. They are, in fact, carefully chosen to reflect each designer’s style and marketing message, and much of that message today is “street.”

According to Svea Greichgauer, Senior Casting Director of AM Casting Paris, models are part of creating the story the designers want to tell. Along with the clothes, it’s the model and how they look with their hair and make-up that create the story.

“It’s a bit like theatre,” said Greichgauer. “Models help embody the designer’s story. We’re not just selling garments, we’re selling the story out of the universe of a particular designer. The model is the protagonist. She is meant to seem real, and sometimes contradict the garment to place even more focus on it. This juxtaposition in meant to leave a thought behind in the audience’s mind.” 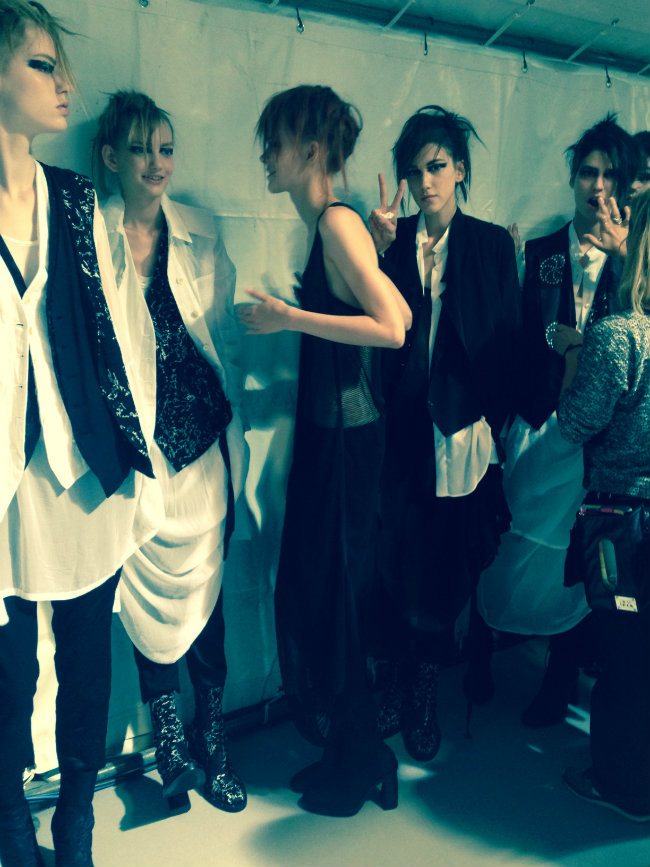 Key to that thought is what the model looks like. The age of supermodels led by the likes of Beverly Johnson, Cindy Crawford and Christie Brinkley has been replaced by “street-casting.” These are new talents that have a very individualistic look. They do not have beautiful, symmetrical faces, but are interesting, sometimes striking looking with unique and strong features that can range from teeth gaps, big ears or noses, and imperfect eyes that hold your attention. They look like normal people, but with a twist.

“This shift has been taken even a step further in this recent season,” said Greichgauer. “Street casting is now in high demand. It’s trendy to use real people that no one has seen before. Height and measurements were sacrificed for a more individualistic look, especially for the avant-garde forerunners of the new generation of designers.” 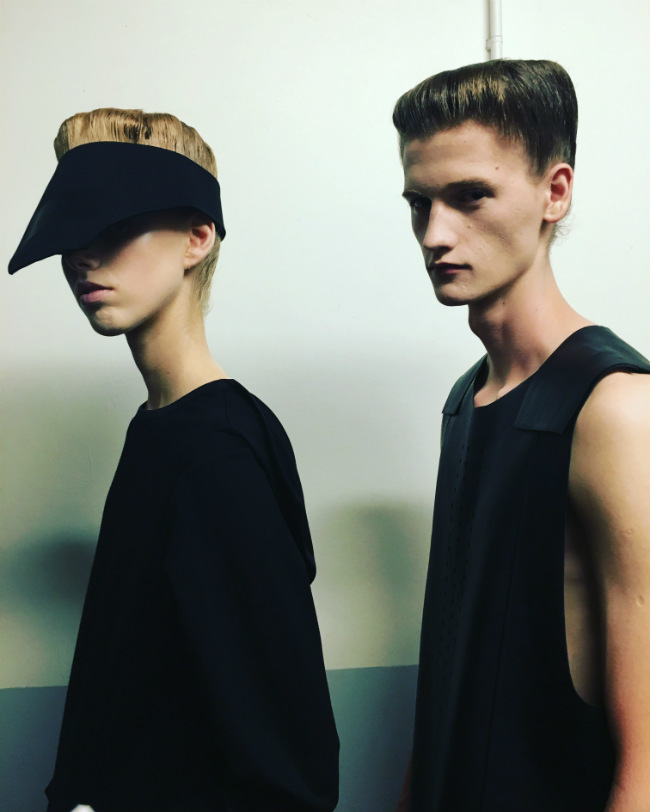 Greichgauer actually tried to hire people she saw on the street and thought were interesting, but that process turned out to be uncomfortable for both her and the potential model. She turned to Facebook and sent messages to those she thought had the look her designer clients required. If successful, she also found “friends” of the initial person online and expanded her army of street models. She also found street models in the more traditional, casting call process too.

Greichgauer’s Paris clients include Ann Demeulemeester, Yang Li, OAMC. AM Castings New York clients that will also be in the Paris shows are Kenzo, Rick Owens, Y-3, Vionette, Off-White and Esteban Cortezar. It is a mix of traditional fashion houses, along with the hip, street wear brands and avant-guard houses of Ann Demeulemeester. Fit becomes key to picking the models that best represent that theatre image for each designer.

“Every designer has a different vision or idea, and especially a different fit which makes the most difference in the requirements,” said Greichgauer. “If the collection is based on very tailored garments, we need to consider fit in regards to shoulder width and measurements. If the collection incorporates a lot of long dresses, height is extremely important. The visual requirement differs from designer to designer, but also with the particular fit of the model.” 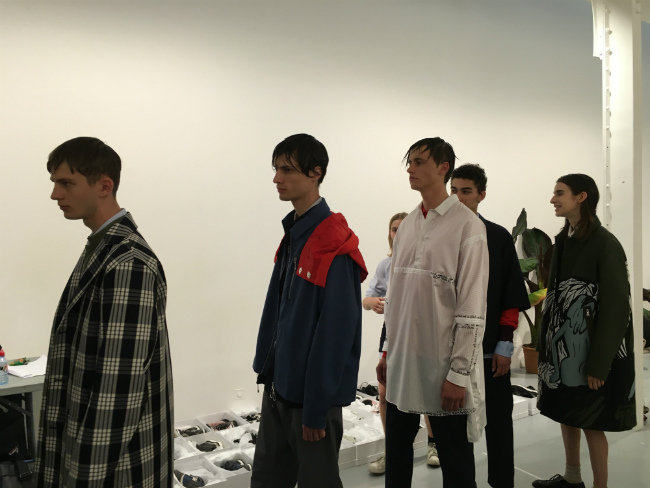 The process to cast a model in a season’s shows is long and arduous. It starts with an open pre-casting where every model is looked at. New talents are discovered that have no campaigns or shows, so it is all about their look.

According to Greichgauer, a digital archiving system is created which identifies the models and which designers each one could work well with. Then AM Casting has a preparation meeting with the designer and stylist to learn the vision, inspiration and mood they want to portray in the show. Directors get a preview of the clothes and listen to the show music. All parts of the image are considered, including the clothes, hair, makeup, music venue and the model requirements that will reflect this theatrical image. Models are selected from the archive and invited to the casting for the designer. 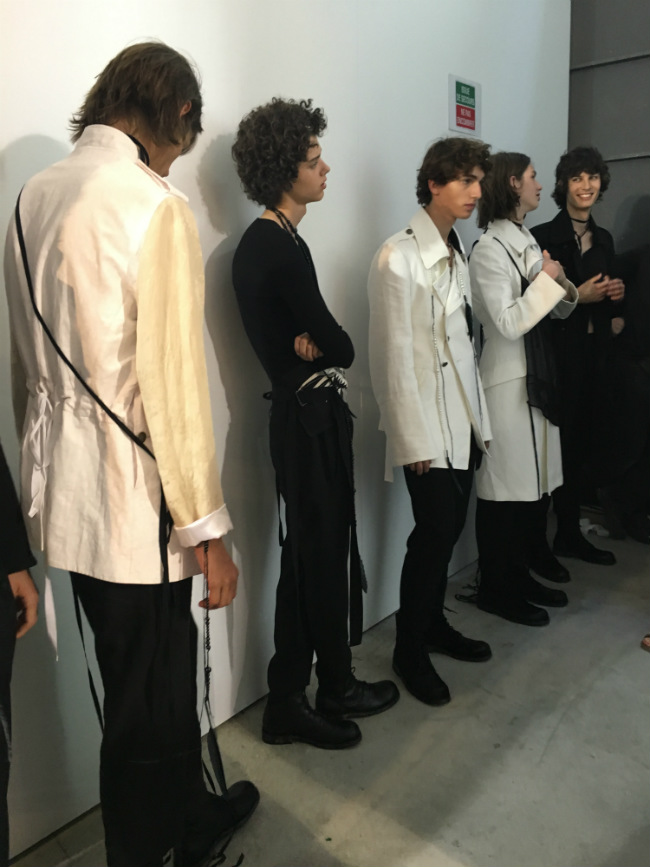 Now it’s about the look of the walk. Each model walks in front of the casting director, designer and stylist. If approved, the model then walks wearing a sample outfit. Fit is analyzed, as is the image portrayed, and pictures are taken. Then it gets tough.

“We have a three tier system,” said Greichgauer. “A Board, B Board and Nos. On the A Board are the model photos we love and want in the show. The B Board holds those to possibly reconsider. The decision is made by the casting director, stylist and the designer, and can be very organic between all parties depending on a conversation or idea that arose.”

The decision then moves to fit. The A Board models try on the actual show outfits, and only then is the final decision made on which models made the cut. 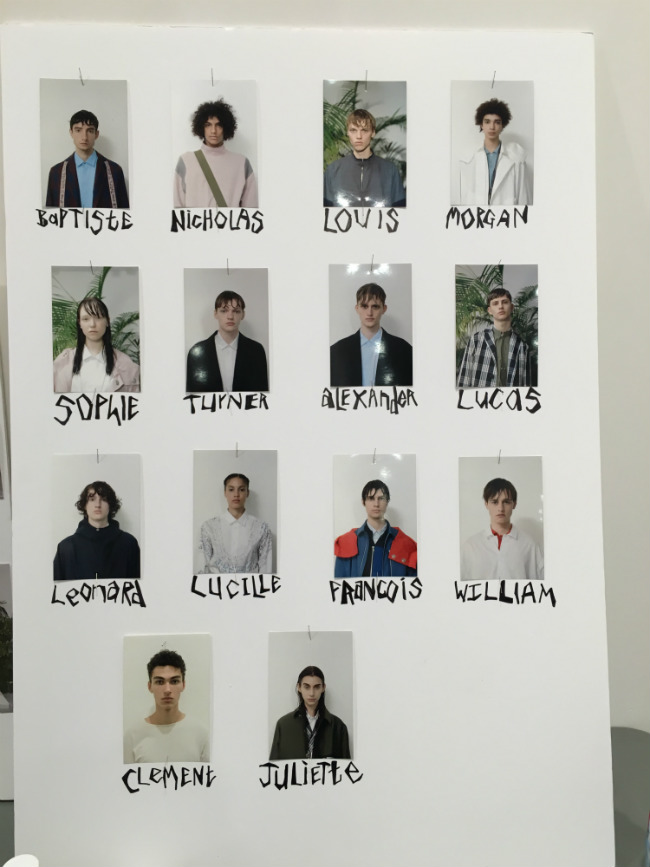 Part of a model’s training to make that cut is not only on how to act around clients and polish their English if needed, but how to walk in heels and flats. This runway training is particularly important as high heels, platforms and even flats can be a challenge to walk in and look natural.

“Surprisingly, the new faces are extremely challenged in walking runway style in flats,” said Greichgauer. “It’s really all about walking naturally. The minute we think about our walk, we start doing things with our hands, head or legs that are not natural. Models must switch out of their head and not overthink a simple walk.”

On casting days, the model receives the casting sheet early in the morning from their agent who has marked the priorities since there are more casting calls than anyone can attend. Each model brings flats, heels, model book, snacks and water. The day will be long.

Once signed in, the model can wait from 30 minutes to four hours for a call. Once called in, the model goes through the walk and fit tests, and then is free to move on to the next casting. By the end of the day, they have typically attended seven to eight castings.

The team will decide if the model is chosen for a sample clothes test at the end of the day. If chosen, they return to try on multiple outfits. The fitting can also last up to four hours. At the end of the day, the model will find out if she has been booked for a show. 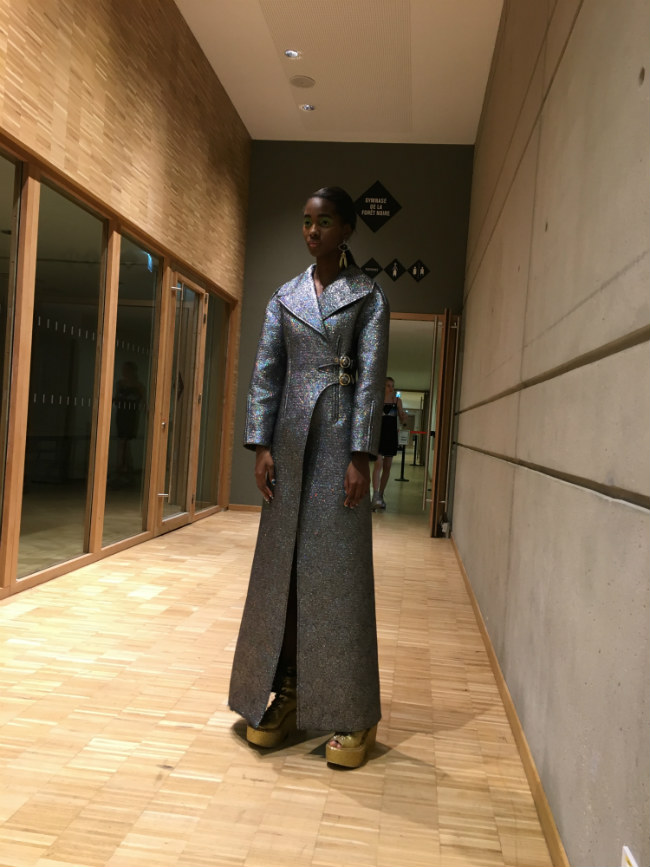 Then it’s off to New York, London, Milan or Paris. A model has to be at each assigned show three to four hours ahead of time for make-up, hair, and nails. On queue, the model walks the cat-walk once in the 10-minute show. Oui, each fashion show by established or new designers lasts only about 10 minutes. A popular model can be booked for several shows a season, so those 10-minute shows can add up.

If a model is chosen to be the first or last in the lineup, it is a great honor. These are the positions that are given the most importance by the press, the designer and the casting directors.

Current models actually eat very clean and healthy, and drink lots of water. They get paid at standardized rates. While new designers pay a low of 800 euros ($886) per show, established designers pay models higher rates. It is possible that a model in this category can make up to $20,000 euros ($22,148) for each show.

According to Greichgauer, time pressure is the hardest challenge during the Fashion Week tours. Sleep is a luxury, and the pressure to turn a show around in four days, no matter what, is high. During a past Milan Men’s Fashion Week, she was missing 10 models for a 6 a.m. call. At 6:30 she started making calls and found they were still at an all night party. She snagged a taxi, went to the party and personally escorted them to the show venue by 7 a.m.

“You have to be quite the pragmatic problem solver in this job,” said Greichgauer.

Paris Fashion Week is Greichgauer’s favorite show. Not only does she get to sleep in her own bed (when she has time to sleep) after traveling for three weeks, but Paris is the closure of the season and everyone is more relaxed. A bit.

“There is nothing really easy in this job, but you are always surrounded by a lot of fun people,” said Greichgauer. “You don’t ever get bored – maybe also because there is no time for that – and there never is redundancy or routines which can make an office job boring. It is fast living and quite energizing.” 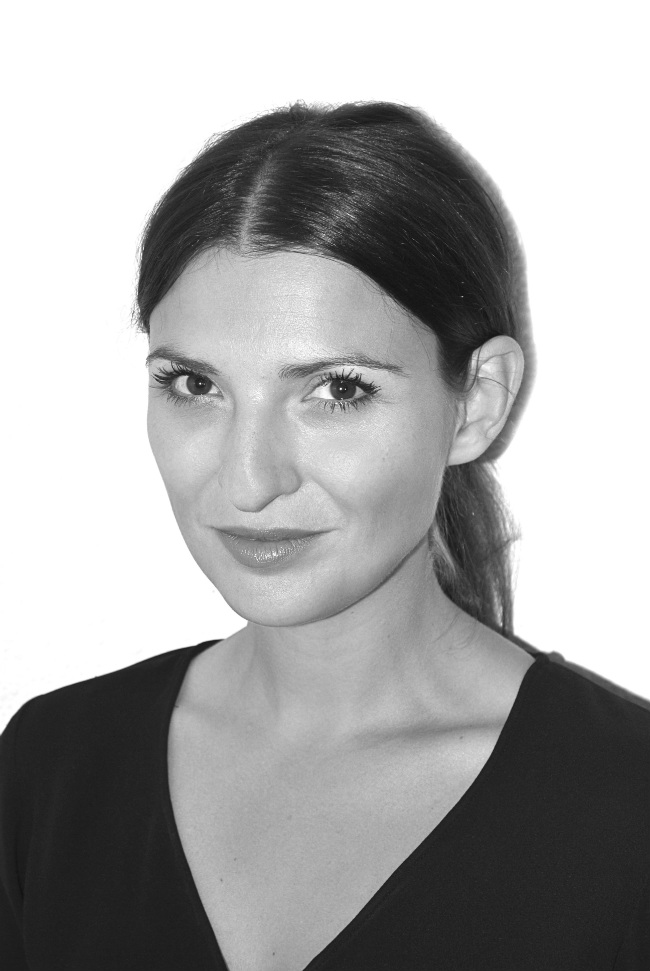 Want to hang out with the models during Paris Fashion Week? Try these locations:

Where’s the current fashion “street” in Paris? Anywhere along the Rue de Bretagne in the Marais. 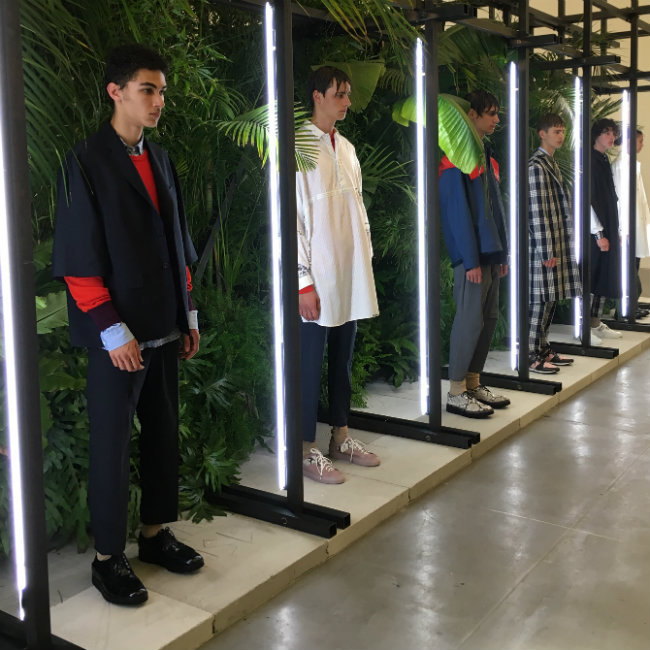