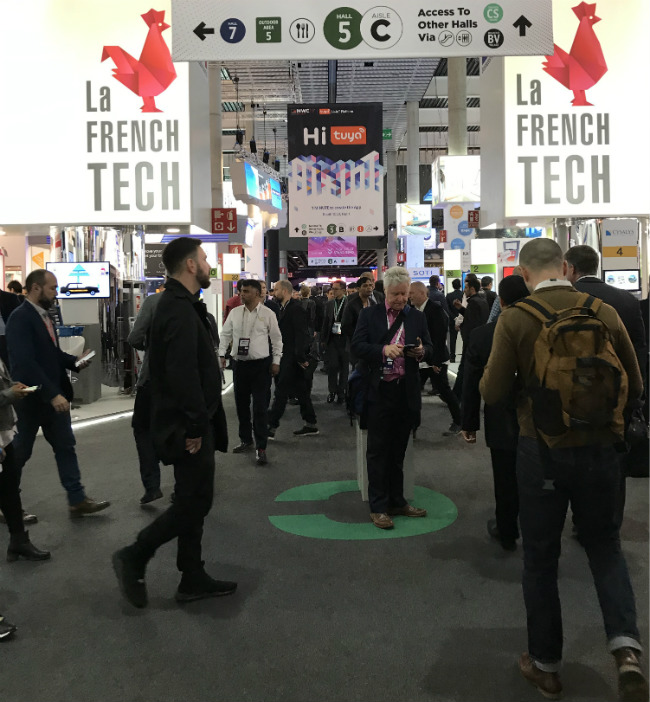 There’s a theory to disconnect from mobile devices when travelling to allow a rest from work distractions, but there are ways to stay connected that make travelling easier and smarter. In fact, technology makes us better travellers. It can broaden our experiences, lighten the load, remove concerns and speed up the journey.

This was on display at Mobile World Congress (MWC19) held February 25 – 28 in Barcelona, Spain. The theme was “Intelligent Connectivity” and booths featured connectivity products and services not just for smart cities, cars, trucks and businesses that use the future network connections of 5G, but also for travellers today.

The French have always been leaders in invention including high technology. The first computer using a microprocessor was developed by Micral in 1973. The Minitel (1980s) was the precursor to today’s Internet and was in most French homes where they made online purchases, train reservations and sent mail. Even the word entrepreneur is French, with many business meanings, including “adventurer.” 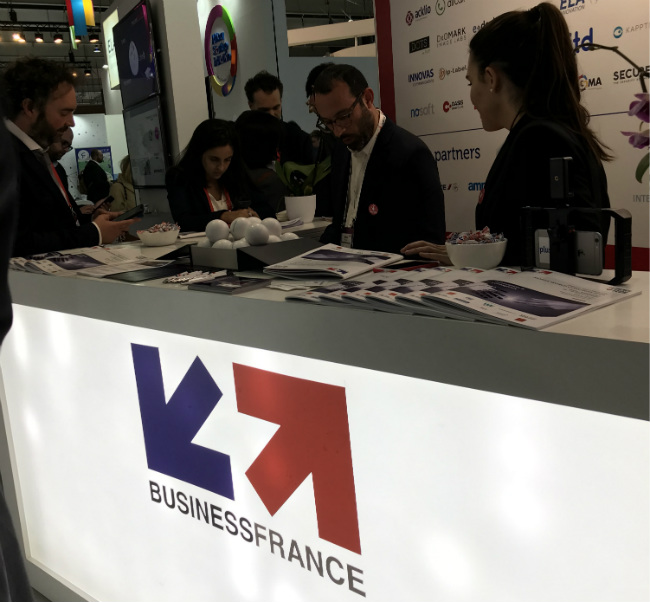 The French are adventurers in technology and travel according to Emmanuel Lebrun-Damiens, Consul General of France in San Francisco. “There is a big curiosity of the French to discover cultures and other countries,” he said. “They look for technology that can help them in countries … from remote islands to big cities.”

France continues to grow in high technology leadership and is a strong partner with the United States. According to Lebrun-Damiens, the U.S. is the leading investor in France while France is the sixth largest investor in the U.S. Last year was a record year for French tech investments with start-ups raising almost $4.8 billion, a 41 percent increase over 2017.

Some of that technology to aid travelers was on display at MWC19. Business France, the national agency supporting international development of the French economy, and La French Tech, a French start-up support group, hosted two pavilions with 100 start-ups and innovative companies. Although most were focused on business-to-business products, there were several that focused on the end user, including those that help the traveller. 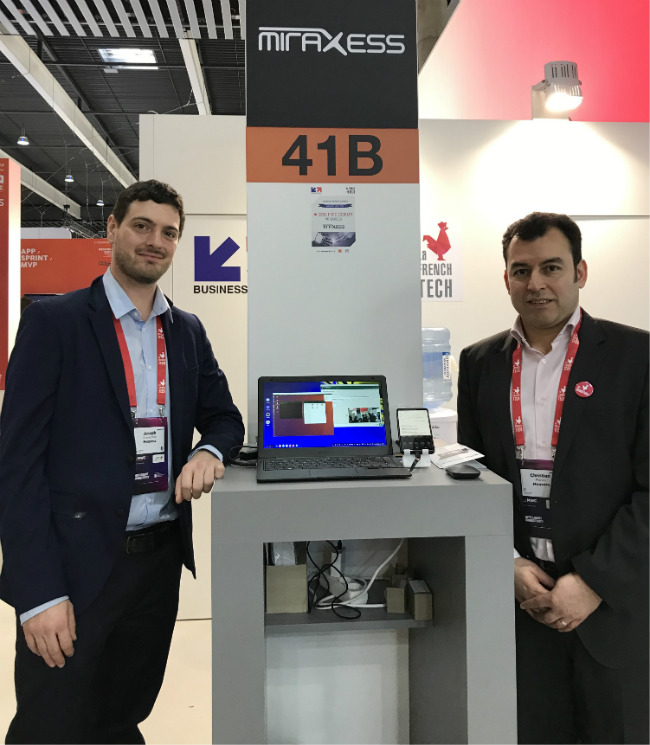 Many of us have multiple devices when travelling, typically our mobile smartphone and large screen laptop. It would be nice to not worry about laptops left in the hotel room without a safe or a safe big enough to hold them. Mirabook from Miraxess turns the smartphone into a laptop by connecting to a laptop-like device that has a keyboard and big screen, but no embedded operating system or memory. No data is retained or stored on the laptop, so it is useless to a thief. 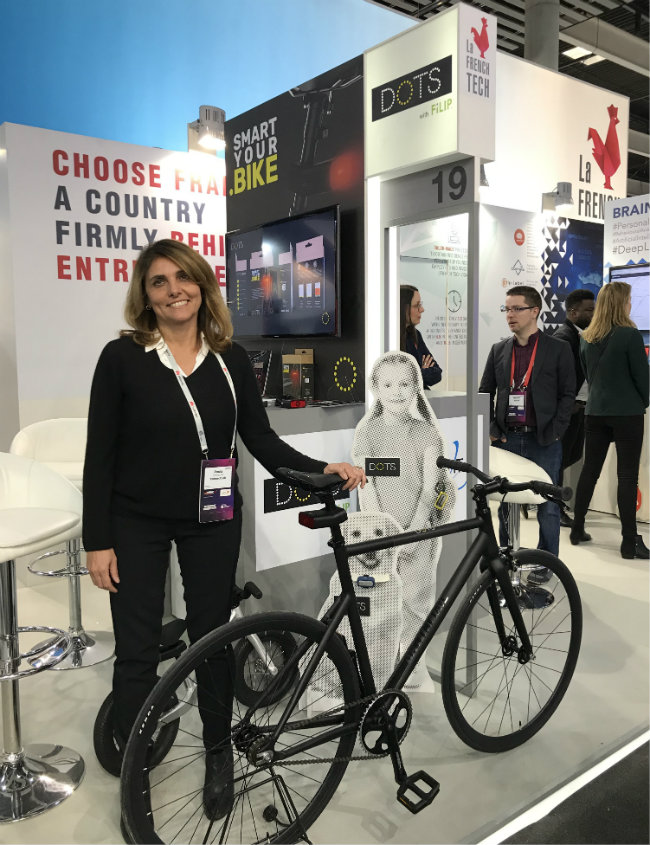 Paola Pinnavia, DOTS Founder and Head of Marketing and Design, stands by a bike and cardboard dog outfitted with the DOTS GPS system. Photo: Martha Sessums

Biking in cities or the countryside is fun when travelling, and wouldn’t it be great to have a GPS system connected to those rented (or bring your own) bikes so the location of family members is always known? DOTS is a GPS system that attaches to the bike seat and keeps riders and their bikes safe at all times. Not only does it provide real-time geolocation, but it also uses an advanced motion sensor to monitor movement and detect accidents if the bike falls over. It also recognises movement indicating a potential theft and has a loud alarm that brings attention to passersby. An intelligent tail and brake light provide safety when riding. Notification is on a phone app via alerts or email, or that loud alarm you hear when in the boulangerie buying a baguette. DOTS also has GPS system for pets so Fido’s or Kitty Pie’s location can be monitored by the pet sitter while you’re on holiday. Might be a good system for dealing with Fido when you return too.

Blacknut was again at MWC19 showing off their growing success in the video game arena. Gaming is a fast-growing entertainment but travelling with all the consoles and equipment is a hassle. Blacknut is a cloud-based streaming service, so it is easily available online and offers a rich catalog of games available on the mobile device, along with TV and computers. Available in France and other European countries, it will be available in the U.S. on Amazon Fire TV by mid-year. 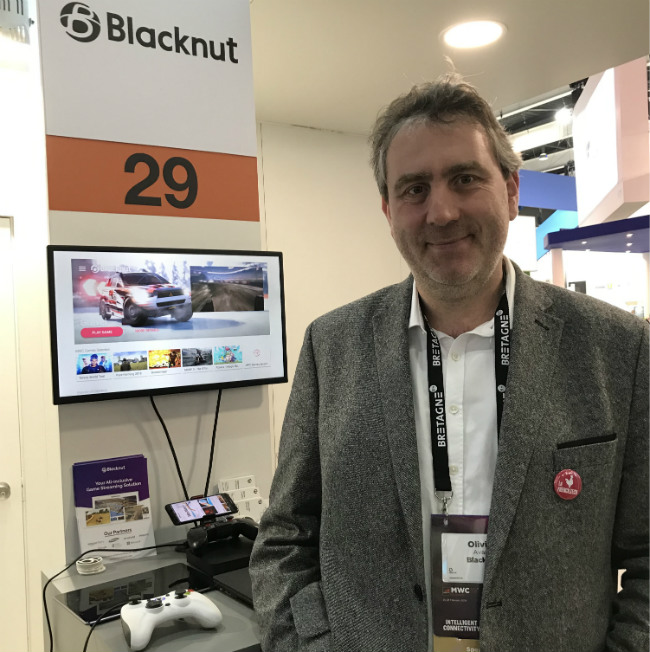 “This is the Netflix for games,” said Anne-Lise Rivoire, Directrice of Business Development. “Users can search, explore and recommend games which is a nice positive experience in gaming.”

Travel often starts with a plane ride. But once up in the air, connecting online changes. Not only is the service lousy, but it’s a hassle to connect. The user is directed to a portal run by the airline and asked to provide a credit card number for expensive use of the internet during a flight. The Seamless Air Alliance wants to change the experience and cost, enabling mobile operators to extend their services into the airplane cabin. That means passengers can seamlessly log into their internet service provider just like at home or work. No unsecure use of credit cards. No delay in access. A fast, reliable service.

“We want to unlock the aircraft just like a phone,” said Jack Mandala, Chief Executive Officer of Seamless Air Alliance. “With the ability to take our network with you at 30,000 feet, the user can step onto any airline and connect in a simple fashion.”

In the background of Seamless Air Alliance is a growing group of airlines (Airbus, Air France etc.), technology equipment manufacturers and mobile operators who are working together to standardise equipment and processes to improve the passenger experience. Around a year old, the alliance expects to introduce the service in two to three years.

There were a wide variety of companies at La French Tech booths that focus on business-to-business products that consumers will eventually experience via company products. Safely managing user data and privacy were two key concerns, including Foxy Nerds and InBox that help companies safely and legally use data to predict trends and create better client relationships, which means smarter targeted marketing. There was also Arjo Solutions that provides companies with mobile anti-counterfeiting technology to make sure drugs and cosmetics are genuine products from manufacturers and not fake.

Much of the technology at MWC19 will be available in the future (think 5G networks and autonomous cars) but for travellers, the technology is available today. That makes travelling easier, safer and better now. 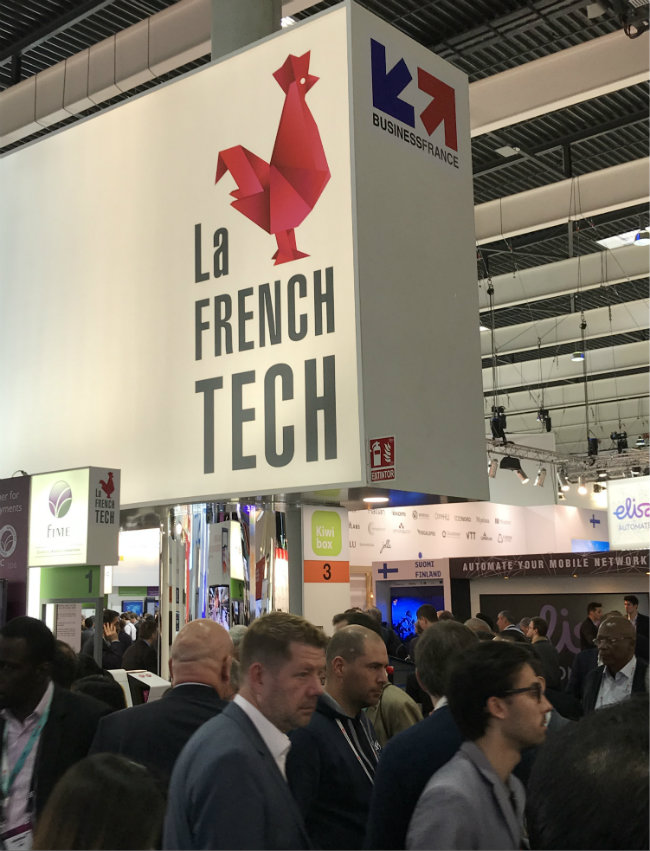 Previous Article Book Reviews: A Beer in the Loire by Tommy Barnes
Next Article Things to See and Do in Midi-Pyrénées