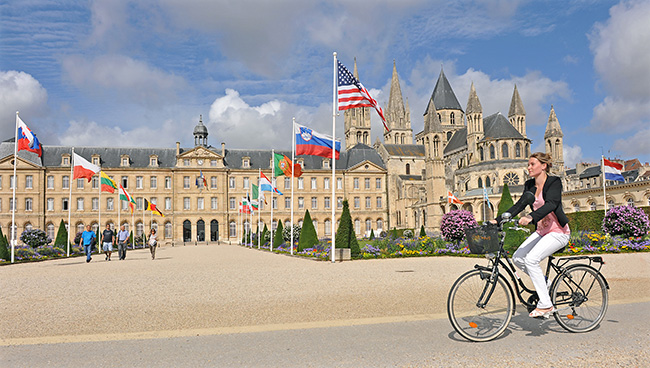 In the heart of Normandy and only two hours from Paris, Caen la Mer is the ideal destination to explore this land of contrasts, from the effervescent city of Caen to the wild and wonderful coastline.

William the Conqueror made Caen a strategic centre during the Middle Ages and to this day you can explore its charming medieval streets and half-timbered houses. At the heart is Caen Castle, one of the biggest medieval fortresses in Europe (with great views over the city and Saint-Pierre Church). The medieval district of Vaugueux, with its with Caen-stone houses, is one of the most popular parts of the city, and Rue Froide, one of the oldest streets in Caen, is home to small independent shops and gourmet addresses.

Thousands of British and French forces landed on Sword Beach in Caen la Mer on June 6, 1944. This vast sandy beach measures 8 km between Ouistreham and Saint-Aubin-sur-Mer and you can still see the bunkers in the sand dunes where the attacking forces took refuge. Remembrance sites in the area include the Great Bunker Atlantic Wall Museum where, with everything recreated down to the smallest details, you can experience the daily life of German soldiers. You can also visit the bunkers of the Hillman Site in Colleville-Montgomery, the N°4 Commando Museum, and pay your respects at the Pegasus Memorial. The Caen Memorial is truly the reference museum when it comes to the Second World War, but also more broadly the history of the 20th and 21st centuries and the often fragile peace in the world.

This is the perfect destination if you want to indulge in watersports, as 10km of sandy beaches await you, as well as four stunning seaside resorts. Ouistreham Riva-Bella beach, next to the port of Ouistreham, is the place to go for watersports such as canoeing, stand-up paddleboarding, sand yachting, jet-skiing, sailing in a dinghy or a catamaran…

Nature abounds along this wild stretch of coastline, but if you simply fancy a sedate stroll along the beach, we recommend Hermanville-sur-Mer beach – look out for the famous ‘Bluette’ villa in Hermanville, which is covered in pebbles from the beach and was designed by the renowned architect, Guimard. It is listed as a historic monument.

The port of Ouistreham. Public Domain

Caen’s Jardin des Plantes was one of France’s first botanical gardens, dating all the way back to 1689. There are over 8,000 exotic and Norman plant species in the 3.5-hectare park. Don’t miss the magnificent Japanese Sophora tree, the olfactory workshop to recognise plants in the medicinal garden, and the Orangery full of banana and vanilla trees.

There are plenty of excellent restaurants to suit all budgets, from the Michelin-starred to the cheap and cheerful. Or head to one of the area’s many markets and buy fresh local produce for a picnic. In Caen, the medieval district of Vaugueux is a great place to spend the evening, with restaurants in little cobblestone streets or in summer, head for the sunny terraces on Place Saint-Sauveur. In the evening, make for Rue Ecuyère, the famous ‘rue de la soif’ (‘thirsty street’) to enjoy the best of Caen’s bars!

At 38m high, you’ll need to make your way up the 171 steps of a spiral staircase but your reward is a 360° view of the city. It’s quite literally breath-taking.

Don’t miss a visit to the Pointe du Siège and the Orne estuary where the meeting point of the freshwater from the River Orne and the salt water from the English Channel has produced a unique landscape. Explore dunes, marshland, the sandy foreshore, tidal flats, salt marsh and woodland. The Pointe du Siège has 1,500 metres of sandy beaches and is listed as a Natura 2000 site. The Orne estuary, the largest reserve in Calvados, is a favourite spot for migratory birds, such as common shelduck and sedge warbler. Look out for seals too.

Caen Castle is home to the Musée des Beaux-Arts de Caen, where you will find many Italian and Flemish works, pieces from the French Renaissance and contemporary art. The castle is also home to the Musée de Normandie, which has various collections of local and historical interest.