A short tootle from Calais, the town of Arras offers the perfect mix of history, culture and retail temptation, says Gillian Thornton

Viewed from the narrow balcony high on the Bell Tower, the townscape of Arras is an architectural treat– from its cobbled squares fringed by gabled façades and cathedral and abbey complex to the Art Deco shop fronts bearing witness to the city’s regeneration after the Great War. And if I focus my eyes I can even make out the Lantern Tower and Chapel of Notre- Dame-de-Lorette, the French national war cemetery opposite Vimy Ridge.

But as a seasoned visitor to Arras, I also know that there’s more to this fascinating town than meets the eye – layers of history that extend far beneath the surface. A distant roof hides the entrance to Wellington Quarry, a unique underground Remembrance site from the First World War. And, hidden from view under the cobbled square below me, a network of tunnels dates back to the Middle Ages. 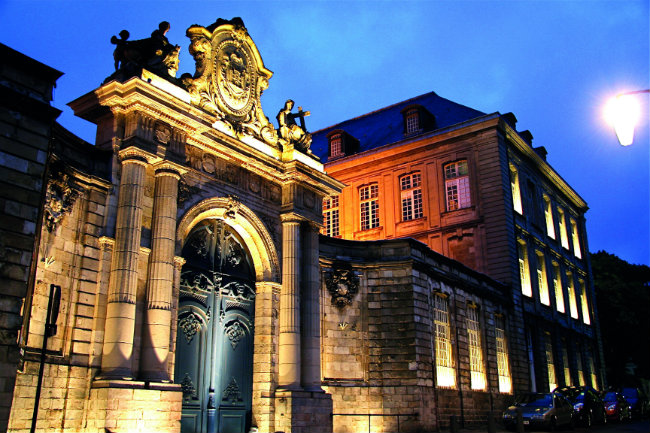 The Abbey of Saint-Vaast was an important medieval monastery. Photo: Cituation & Ensemble

Add in a buzzing Saturday market scene and a wealth of independent shops and restaurants, and you have all the ingredients for a great city break. So it’s a shame that the only thing many people see of Arras is the exit sign on the A26 motorway. Turn off once, however, and you’ll be hooked on this historic town, capital of the Artois area of Pas-de-Calais.

Arras is in the spotlight this year as centenary commemorations for the First World War draw to a close, but that’s a recent event in these parts. Once a strategic base for Julius Caesar, the Roman town of Nemetacum had morphed into a centre of considerable artistic and financial importance by the Middle Ages. Part of the Spanish Netherlands in the 16th century, Arras was ceded to France in 1659; and by the 18th century it was home to one of the largest grain markets in France.

But it’s the UNESCO-listed belfry that sheds most light on the history of Arras. Completed in 1554 after almost a century of construction, it was destroyed in 1914 by German artillery. Its fate would be that of much of the rest of the city. By the time the war ended, in November 1918, 80 per cent of Arras had been destroyed, including the gabled houses surrounding the twin squares of the Grand’Place and the place des Héros. 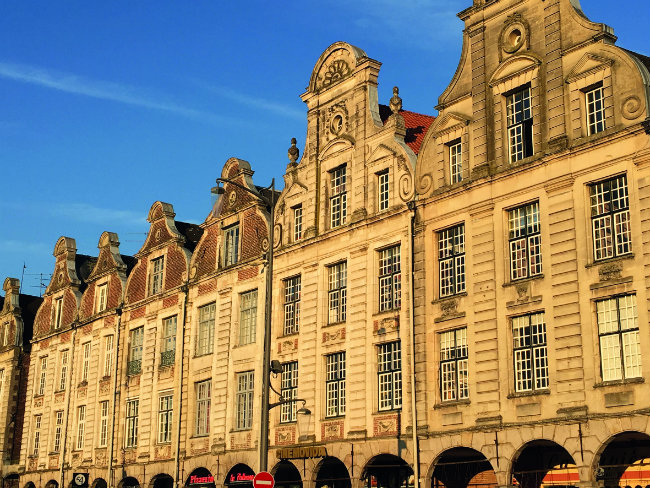 The evening sun shining on the buildings of the Grand’Place. Photo: Gillian Thornton

Markets had been held here in the Middle Ages, but in the 17th and 18th centuries the houses were rebuilt in brick and stone with Flemish gables – 155 of them in all. Today it’s impossible not to look at these distinctive houses, the Gothic belfry and the Town Hall without silently thanking architect Pierre Paquet, Architect in Chief for Monuments Historiques, who had the vision to rebuild them in their original style in the 1920s.

For the high-level view from the belfry, you need to buy a ticket from the Tourist Office inside the Town Hall before taking the lift and 40 steps to the balcony, camera to the ready. Afterwards, head to the basement for a guided tour of the Boves, the limestone quarries that were excavated from the 10th century onwards. These underground spaces subsequently became cellars and storerooms, shelters from bombing raids, and eventually bars and restaurants. 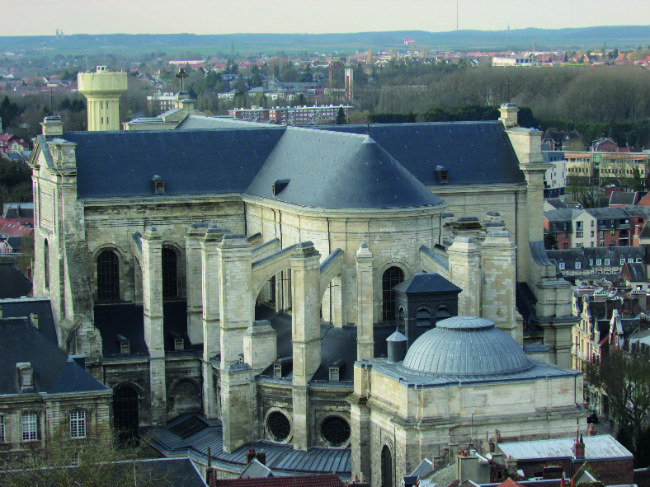 View over the Cathedral from the Bell Tower. Photo: Gillian Thornton

And if you’re in town on a Sunday afternoon, don’t miss the guided tour of the Town Hall function rooms for an Art Deco treat of wood panelling, paintings and wrought-iron work. I love the huge frieze in the great reception hall that depicts scenes of 16th-century life – market traders, a bishop blessing the crowd, outdoor fast food, minstrels, merriment and more.

A short walk from the Town Hall, the Arts District includes an 18th-century theatre and a fine townhouse, the Hôtel de Guines, which is now a concert and exhibition venue. But the area is dominated by the Cathedral, Saint-Vaast Abbey and the Library. Together these form the largest 18th-century religious architectural grouping in France – a measure of the town’s economic and spiritual importance at that time. Approach them from behind and you can see three metal rats on the ridge of the cathedral roof, a reference to the rat on the city’s coat of arms. The business of grain-trading meant that rats were commonplace, but it’s also a play on words: un rat and Ar-ras. Look out for chocolate ones filled with crunchy ganache! 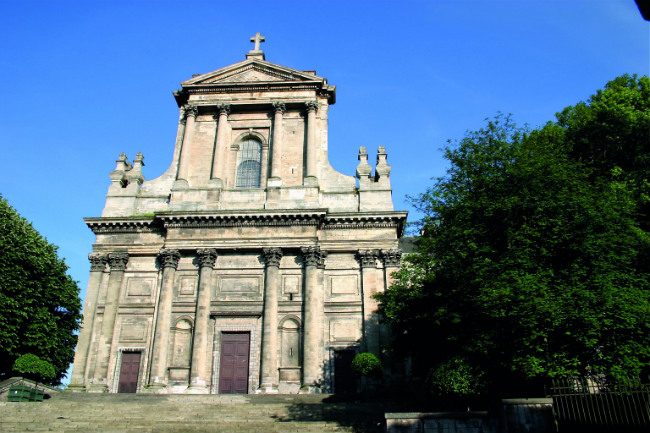 Today, most of Saint-Vaast Abbey is home to the excellent Musée des Beaux-arts. Admission to the permanent collection is free, but the temporary exhibitions are worth getting tickets for. An example was the recent show Napoleon: Images of the Legend. The third collaboration with the Palace of Versailles, the exhibition brought together a collection of art never before assembled outside Versailles. Visitors could follow Bonaparte’s life from young army cadet to war hero and exiled emperor through a series of proud portraits and large-scale paintings of battle scenes.

But while Arras is always red hot on culture, there’s another side to this enchanting town. From my bedroom window at the delightful Hôtel Grand’Place, I have a front-row view of those gorgeous gables and the arcades which provide all-weather comfort to shoppers and restaurant-goers. So the next morning I set out to discover a few of Arras’s many independent shops. 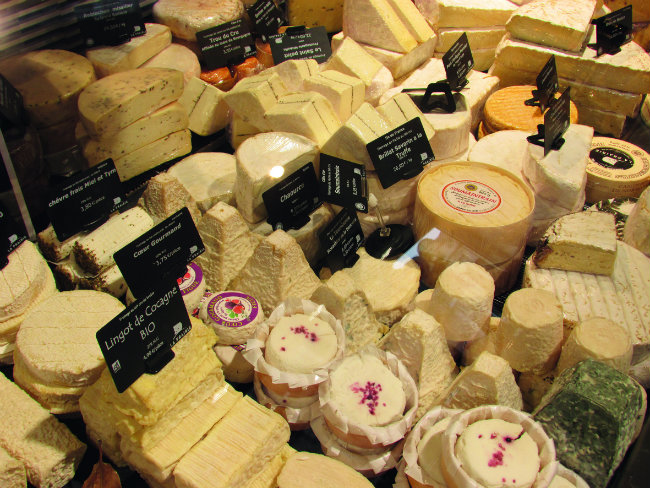 On place des Héros, at No. 66, five generations of chocolate-makers have been selling sweetness at the Jean Trogneux boutique. Meanwhile, along at No. 50, homemade specialities from pâtissier Sébastien Thibaut include traditional Coeur d’Arras heart-shaped biscuits made from spiced bread. If interior décor is more your thing, drop in to Au Bleu d’Arras at No. 32 for traditional white china with a cobalt blue flower motif. And no trip to France is ever complete without cheese, so if you’ve got a cooler bag head down the side of the Town Hall to La Prairie deli and fine foods at 4 rue des Trois Visages for a choice of more than 200 varieties. To celebrate, there’s a selection of more than 100 French beers at Au Comptoir de Fred in rue Paul Doumer, where you can also refuel on the week’s selection of savoury tartines (open sandwiches).

Shopping done, I have time for one last discovery, being transported by free shuttle bus to Vauban’s Citadel in the lower town. Departing every ten minutes, Ma Citadine links four free car parks to the Cathedral, the Grand’Place and this 17th-century fortification.

The foremost military engineer of his (and perhaps any) time, Sébastien Le Prestre de Vauban incorporated Arras into his famous Pré Carré, the double line of fortified towns running along the northern border of France that was designed to protect the kingdom from the threat posed by the Spanish Netherlands. The Fortifications of Vauban – of which there are 12 examples around the borders of France – were added to the list of UNESCO World Heritage Sites in 2008. In the end, this particular citadel was never put to the test – and would be dubbed the ‘Great Folly’ by the man himself – yet the very fact that it suffered no war damage makes it one of the finest examples of Vauban’s work. He could never have imagined this, but these days, every July, it becomes the atmospheric venue for the international Main Square music festival. 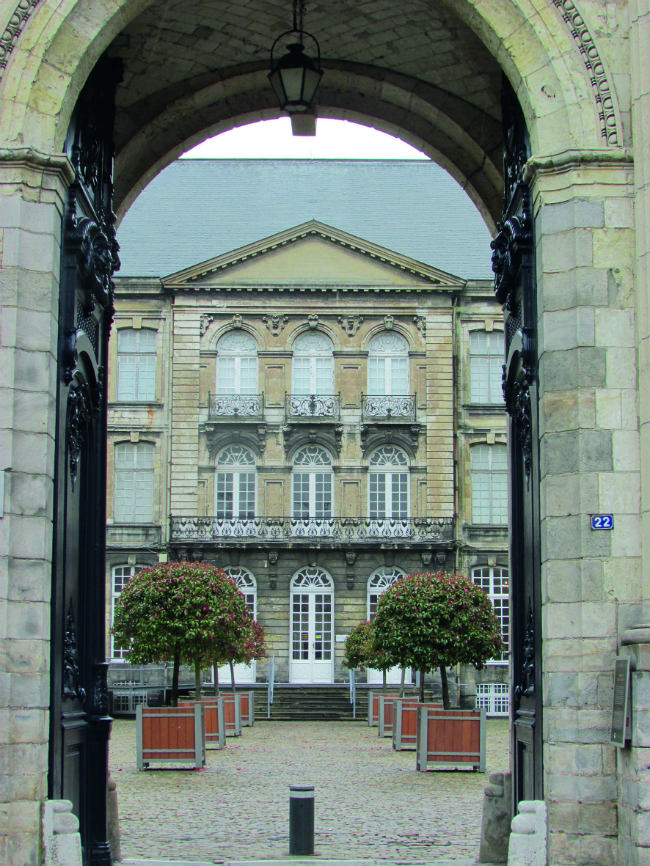 Getting there By car: Gillian travelled with DFDS from Dover to Calais (www.dfds.com). Calais to Arras is around 75 minutes’ drive along the A26, leaving at Junction 7.

By train: Eurostar to Lille, then it’s around 45 minutes from Gare de Lille Flandres.

Gillian stayed at Hôtel Grand’Place, 23 Grand’Place. Tel: +33 (0)3 91
19 19 79, a contemporary boutique hotel in a historic building. Double rooms start from €102 to €170; parking beneath Grand’Place (paid separately). She dined in the historic cellar restaurant of La Cave des Saveurs across the square. 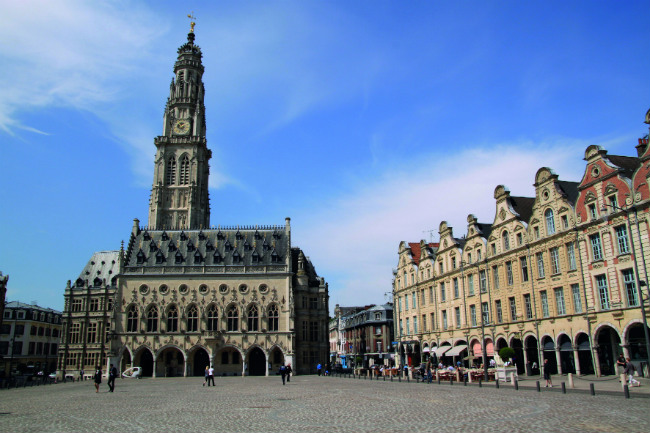 Market day is an important event in Arras, with people coming into town from far and wide on Saturday mornings to shop at the city-centre markets held on the Grand’Place, on place des Héros and on place de la Vacquerie. The city’s Christmas market is one of the best in France.

Overlooking the place des Héros, the Town Hall with its 75-metre bell tower was destroyed during the First World War but rebuilt soon afterwards. Historically, the tower served as a lookout point; today it offers unrivalled views of the city. Its statue of a lion holding an emblem of the sun commemorates a visit by Louis XIV. 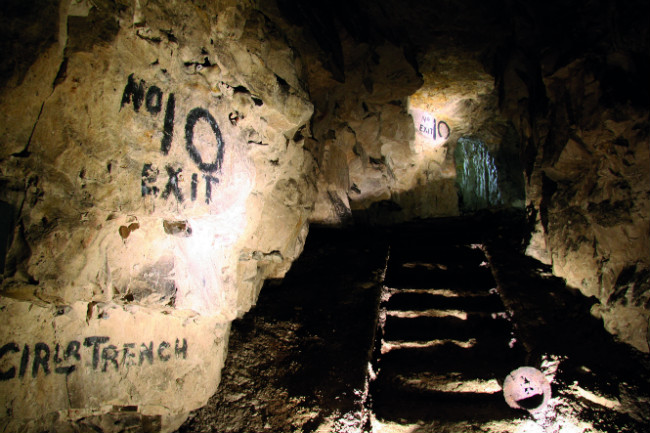 The Wellington Quarry, or Carrière Wellington, opened in 2008 as a museum named after an old underground quarry that formed part of a network of frontline tunnels serving the Allies in the First World War. On the morning of April 9, 1917 – the first day of the Battle of Arras – some 20,000 Allied soldiers emerged from here to a position just metres from the German lines. www.carrierewellington.com

THE CITADEL BUILT BY VAUBAN

Walk the vast courtyard dotted with former barracks, now offices and apartments; stroll along broad avenues above the moats and fortifications; and ponder a while at the Mur des Fusillés, which pays tribute to the 218 Résistance members who were shot here during the Second World War.

Adjacent to the citadel, the British Military Cemetery contains the graves of 2,652 Commonwealth soldiers. The surrounding memorial wall carries the names of 35,928 British, New Zealand and South African combatants who fell in the Arras sector and whose bodies were never recovered. There is also a memorial dedicated to the Royal Flying Corps. 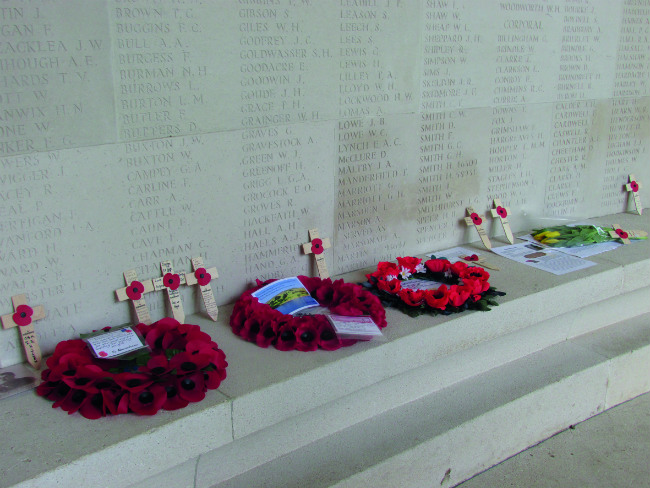