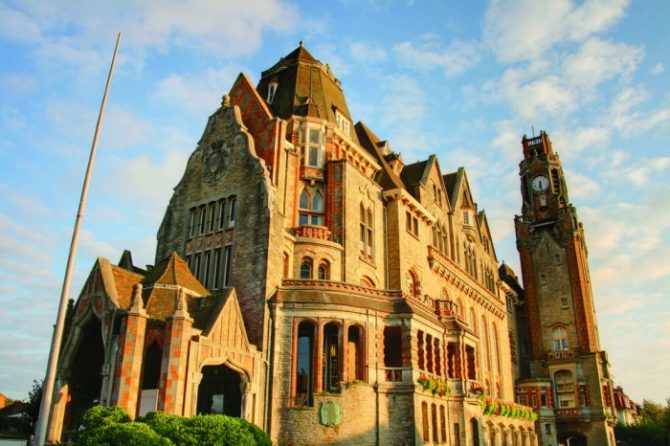 Are you in search of wide-open sands and pine forests alongside shopping and gastronomic temptations? Visit Le Touquet-Paris-Plage, an ideal short break spot just 45 minutes from Calais, says Gillian Thornton.

If your idea of the perfect short break involves medieval architecture, jagged mountains or rolling vineyards, then Le Touquet may not be quite what you’re looking for. But if you like the sound of wide open sands and scented pine woods, chic shops, tempting restaurants and a vast range of leisure facilities, then Le Touquet Paris-Plage – to give the resort its full name – could satisfy your every need. And all just 45 minutes from Calais.

In 2012, this modest town on the Pas-de-Calais coast celebrated its centenary with a variety of special events, but every year Le Touquet hosts a packed programme that ranges from international bridge tournaments to dressage competitions, beach volleyball to golf. And if you’d rather play sport than watch it, you’ll find facilities for every sport you’re likely to want and a good few more besides.

The story of Le Touquet began in 1837 when an uninhabited area of sand dunes riddled with rabbits was bought by two local men, Messieurs Daloz and Alyon. Their plan was to grow root vegetables and breed sheep, but the project failed and instead Alphonse Daloz – Mayor of nearby Cucq from 1855-65 – set about planting a mixed forest where game flourished.

Suddenly Le Touquet began to attract attention and when the owner of Le Figaro – himself a keen hunter – dubbed the small town ‘Paris-Plage’, Alphonse began to dream of a seaside resort for city dwellers. But it wasn’t until after his death in 1885 that construction really took off. The land was sold again, this time to two British businessmen, John Whitely and Allen Stoneham, who built luxury hotels such as The Westminster as well as casinos and sports facilities. The rest is holiday history.

In March 1912, Le Touquet became an independent town instead of being administered from Cucq. Its hotels were commandeered as military hospitals during the Great War, but the 1920s and ‘30s saw a period of huge expansion, and today Le Touquet’s discovery trail is a wonderful way to enjoy its flamboyant Art Deco villas and municipal architecture. Pick up the Promenade Découverte leafl et at the Tourist Office for the self-guided option or ask about guided cycle excursions.

Most of the sea front villas were lost during World War II and replaced by uninspiring apartment blocks. But it’s still possible to find sea-facing villas with brightly painted gables and wooden balconies – a glimpse of how the lengthy promenade must have looked in those heady days between the wars.

Step back a block or two and the period architecture comes thick and fast. The Art Nouveau extravaganza of Le Castel, built in 1904 with a Cinderella-style turret; the Art Deco Post Office and the Town Hall; and the expressive ‘face’ of the colourful Tata Ice villa, built in 1926 with inspiration from Czech cubism.

Behind the grid of streets that front the beach, quiet avenues wind through the forest, the trees hiding some seriously stylish homes which for the most part are second homes popular with Parisians. Le Touquet’s population of 5,500 permanent residents swells dramatically during the peak holiday season, but visit out of season and you really can enjoy the tranquillity of the resort.

Boredom isn’t an option either. When you’ve followed the architectural trail – and perhaps the forest and coastal options of the Promenades Nature – there are plenty of diversions to fill your days. Le Touquet’s most prominent leisure attraction is its eight-mile beach of fine sand which offers far more in activities than just sand castles and sunbathing. In early Feburary, for instance, the beach reverberates with the roar of the Enduropale, the world’s greatest motorcycle beach race, and in spring, the beach hosts a polo tournament.

The wide firm sands are a magnet for sand-yacht enthusiasts and if you fancy a go, there’s expert tuition available at the Base Nautique Sud, directed by the 5-times World Speed Sand Yachting Champion. It looks easy when you watch from the promenade though personally I found catching the wind a rather hit-or-miss experience. Mostly miss. But when eventually I did whizz along the beach with the wind in my sail, I understood how this so easily becomes addictive.

Stroll the sands outside peak bathing hours and you may spot horse riders on the beach. Le Touquet’s substantial equestrian centre has access to 45km of trails and hosts both national and international competitions. Novice riders are welcome, but don’t be tempted to overstate your experience if you’re heading for the beach. Horses step up a gear on the open sands and as I relaxed my tired muscles into a soothing bath after my beach ride, my face felt as if it had been sand blasted.

If you like your exfoliation a little less dramatic, Le Touquet offers all kinds of opportunities for relaxation, including spa and thalassotherapy treatments. Thalasso – or treatments using seawater and minerals – has never really taken hold on the British side of the Channel but is big business along the French Atlantic coast.

Golfers have a choice of three challenging courses and if you’ve not played at a French club before you’ll find it delightfully unstuffy compared to home, with far fewer dress and etiquette rules. Enjoy a day at the races? Le Touquet’s charming course beside the Canche estuary boasts two Art Deco stands and holds meetings throughout the summer. For tennis fans, there are 25 clay courts, the town being second only to Roland- Garros for clay, and when culture beckons, you can take in a concert or visit the museum to see work by local artists.

The town centre offers a wide choice of independent retailers interspersed with more than 60 places to eat. Browse the boutiques along Rue de Metz and Rue St Jean, and stock up on edible souvenirs to take home – some speciality chocolates perhaps from Au Chat Bleu; a jar of fabulous fish soup; or some bottles of local artisan beer. And don’t miss the stalls beneath the Art Deco gables of the covered market on Saturday mornings.

Built in a half-moon around the open-air market place, not far from the Town Hall, the gabled roof shelters stalls piled with fresh produce, including a glistening still life of tasty creatures from beneath the rich local waters of the Channel.

Visitors with wheels will also find plenty of other delights within easy reach of Le Touquet. Follow the Canche inland to Montreuil-sur-Mer, which hasn’t been sur mer for many a long year. Its quaint streets and attractive buildings inspired Victor Hugo during a stopover in 1837 and he used the town as a backdrop for Les Misérables.

Every summer, a huge cast of volunteers retell the story to packed audiences inside the citadel and if you want to find out more about this unique event – or any other aspect of Montreuil – I’d recommend making an appointment with Collette Martel, one of a network of voluntary Greeters across Nord-Pas de Calais. A truly delightful way to get an inside view of this lovely corner of northern France.