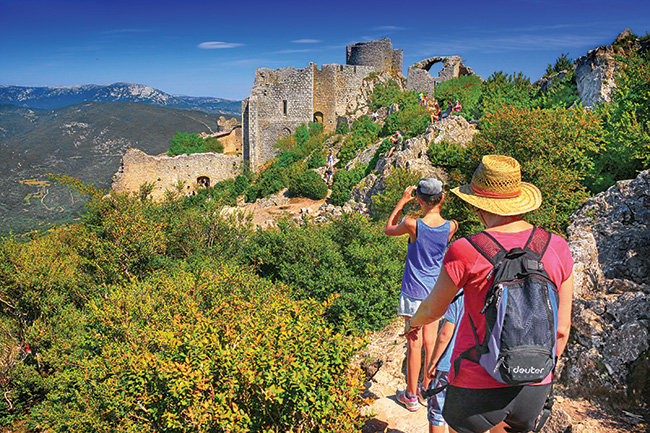 From rugby, surfing and pelota to art galleries, châteaux and festivals, this region is ever vibrant. Note: this article is part of the megafeature “Tracing the Pyrenees“.

Southwest France is spoilt for choice when it comes to the oval ball. In Perpignan you can watch rugby union team USAP Perpignan or rugby league team Catalan Dragons. Over in the Basque Country there is Biarritz Olympique and Aviron Bayonnais.

Any self-respecting Catalan ought to climb the Pic du Canigou (2,784m) at least once in their lifetime, while proud Basques have their own Pyrenean peak, La Rhune (905m). From July to September the latter is also accessible by train. Up until the 18th century, local villages hired a monk to live up on the summit and guard the region from evil witches.
www.tourisme-canigou.com
www.rhune.com/en

Since 1933, the city streets of Pau have been blasted by the screech and roar of racing cars thanks to the annual Grand Prix de Pau, in May. Drivers must negotiate tight laps around a street circuit on the town centre’s public roads. The following weekend there are vintage races at the Grand Prix Historique. grandprixdepau.fr

Virtually all the best surfing beaches in France are located on a short stretch of coastline in the southwest, incorporating the towns of Anglet, Biarritz and Saint-Jean-de-Luz. Surfers have been riding the waves here since the 1950s. Barrelling in from the North Atlantic, huge swells are generated all year round in the Gulf of Gascony. The best conditions are in late spring/early summer and autumn/early winter. For beginners and improvers, there are many surf schools including Jo Moraiz Surf School (www.jomoraiz.com), Surf School Lagoondy (www.lagoondy.com), Biarritz Surf Training (www.surftraining.com), École du Surf Francais Biarritz (www.ecole-du-surf-francais-biarritz.fr), Biarritz Eco Surf School (www.biarritzecosurfschool.com), Ecole de Surf Plums (www.plums-surf.com) and Biarritz Surf Ocean (www.biarritzsurfocean.com).

Pau is rightly very proud of its magnificent white-water park, Parc Aquasports. As well as staging professional competitions, it’s open to amateur paddlers of all skill levels. There are 5,000m2 of water, including a competitive course and a beginner’s area. On offer are kayaking, canoeing, stand-up paddle boarding and something called hydrospeed. www.paupyrenees-stadeeauxvives.fr

In the early 20th century many prolific artists ended up in Céret, in the Pyrénées-Orientales. Nowadays the Musée d’Art Moderne de Céret punches well above its weight, displaying works by the likes of Picasso and Matisse, both of whom were involved in its establishment in 1950. www.musee-ceret.com

Perpignan’s Musée d’Art Hyacinthe Rigaud once served as a studio and living space for Picasso, Dufy and Cocteau. It has undergone a very costly renovation, and now celebrates great art from the 15th to the 20th centuries. facebook.com/museedarthyacintherigaudofficiel

Basque culture is alive and kicking and one place that will help you understand it is the Musée Basque et de l’Histoire de Bayonne, housed inside the Maison Dagourette. Here you’ll discover Basque language, art, architecture, history, festivities and pelota. www.musee-basque.com

Not far away to the south is the Cité de l’Océan, a hi-tech interactive museum celebrating all things oceanic, from surfing and submarines to Arctic exploration and virtual reality sharks.
www.citedelocean.com

On the Catalan side of the Pyrenees, you can take Le Petit Train Jaune for 63km from Villefranche-de- Conflent to Latour-de-Carol. The route includes gorges and vertigoinducing viaducts. Hop on and off wherever you please in order to explore the pretty mountain villages.
www.tourism-canigo.com/the-yellow-train

When it comes to photojournalism, there is no French exhibition more important than Perpignan’s Visa pour l’Image, an annual free event which takes place all over town from late August to mid-September. This year’s starts on August 27 and will no doubt have a special emphasis on the war in Ukraine. www.visapourlimage.com

There are multiple medieval Cathar castles dotted across the region, built by the persecuted Christian sect of the same name. One of the best is Château de Quéribus, a gravity-defying eagle’s nest perched 728m up, atop a steep, rocky pinnacle. You’ll feel like a medieval knight as you negotiate its steep stairways and vertiginous terraces www.cucugnan.fr.

Another is Château de Peyrepertuse which sits on a jagged limestone ridge, with sheer drops all around and views to die for. Drive up from the village of Duilhac or make the hot, dusty hour-long climb by foot. www.peyrepertuse.com.

Staged in late July, this annual five-day festival draws around 1m visitors, many from the French Basque diaspora. A uniform of white clothing with red neckerchiefs and belts is encouraged, as is partying late into the night. There are bullfights, bull runs and traditional Basque celebrations. fetes.bayonne.fr

Each February, three French Catalonian villages stage a rather unusual carnival, all centred around men in bear costumes. Legend has it a bear once snatched a young girl from the area, was caught and chained up by villagers and shaved with an axe before becoming human. www.fetesdelours.com