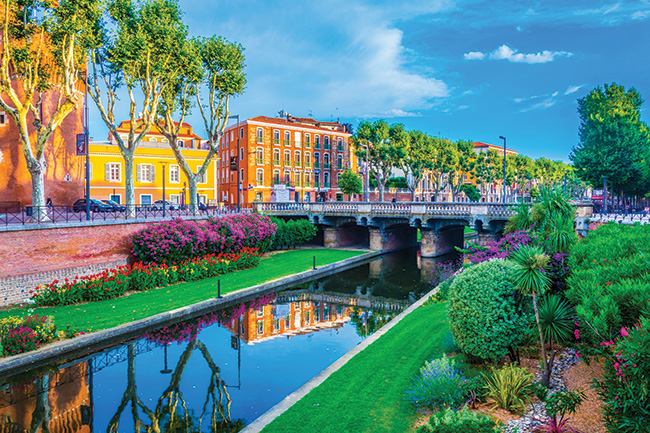 From French Catalonia on the Mediterranean coast, all the way to the French Basque country on the Atlantic coast, Dominic Bliss enjoys a road-trip odyssey, driving parallel to the glorious Pyrenees mountains.

“There is nothing in France that quite matches the sweetness and diversity of the long Pyrenean border. Nowhere else are the pastoral and sylvan so happily mated, nowhere the villages so compact of thrift and romance, the foreground so sweet, the distances so sublime and shining.”

In the early years of the 1900s, American writer Edith Wharton spent many happy months driving all over France in a motor car – a new-fangled invention at that time. She was researching material for her new travel book, A Motor-Flight Through France – eventually published in 1908 – a key section of which detailed the pretty villages and countryside of the Pyrenees, as described above.

This southernmost sweep of France, where the country’s second biggest mountain range forms the frontier with Spain, is a region of wild, rugged terrain. Stretching east to west from the Mediterranean to the Atlantic, it straddles six departments: Pyrénées-Orientales, Aude, Ariège, Haute-Garonne, Hautes- Pyrénées and Pyrénées-Atlantiques.

As the elevation of the land drops on the French side of the Pyrenees, mountain slopes quickly give way to hilly ranges, deep river valleys, dry rocky scrub and thick, lush forest.

There are few large cities here, rather a glorious selection of towns and villages where the climate, the geography and the cultures differ enormously. Catalan, Occitan, Gascon, Cathar Country, Basque… it’s all there in its richness – perfect for a long and varied road trip. But which direction should you travel? East to west, or west to east? It really matters not. With international airports, both Perpignan (on the Med) and Biarritz (on the Atlantic) are good starting points, and offer plenty of car-hire facilities. For this guide, we set off from the east.

The Bluest of Skies

Collioure, on the Côte Vermeille, just 26km from the Spanish border, is where our journey starts. Here, on a protected stretch of the Mediterranean, the lucky locals have one of the most pleasant climates in all of mainland France. Summers are hot, yes, but winters often remain mild. With midday temperatures nudging above 15°C, it’s not unusual to see people eating lunch al fresco in the December sunshine.

In spring, you can ski in the nearby Pyrenees in the morning and swim in the Med in the afternoon. The light in this part of the world is quite phenomenal. The sea here is often calm, producing very little surf to break the sun’s reflection on the surface of the water. Long days of uninterrupted sunshine and the many pastel-coloured buildings and orange roofs create a heady mixture of brightness and colour.

Collioure in the shadow of the mountains © Shutterstock

This is what has attracted so many artists to Collioure over the years. There are now more than 40 art galleries and artists’ studios dotted around town, many of them dedicated to Fauvism, the art movement that flourished here in the early 20th century, drawing in luminaries such as Henri Matisse, André Derain, Étienne Terrus, Aristide Maillol and George-Daniel de Monfreid. Other famous artists such as Pablo Picasso, Georges Braque and Raoul Dufy also came here to paint. “No sky in all France is more blue than that of Collioure,” Matisse once famously enthused. Nowadays, the Maison de Fauvisme offers several guided tours.

From Collioure, it’s a short drive north to Perpignan. The centre of Catalan culture in France, this city was the capital of the Kingdom of Mallorca in the Middle Ages. Nowadays, if you listen carefully, you’ll still hear Catalan spoken on the streets, often from the mouths of refugees from the Spanish Civil War or their descendants. It’s not the prettiest town but it’s an excellent base from which to head into the Pyrenees (for hiking in summer or skiing in winter), or into the scrublands of the Corbières Massif and the many Cathar castles beyond.

The city of Perpignan © Shutterstock

From Perpignan, the D117 heads west, south of the Corbières Massif and through a region called Fenouillèdes. It’s a beautiful if fairly barren drive, taking in the towns of Estagel, Saint-Paul-de- Fenouillet, Quillan, Lavelanet and Foix. The latter, with its triple-towered 10th-century castle and open-air theatre, sits on the confluence of the Rivers Ariège and Arget. Northwest of the town you can take an amazing subterranean boat ride along Europe’s longest navigable underground river, Rivière Souterraine de Labouiche. It’s a great way to escape the summer heat. The D117 continues west, wiggling through the Parc naturel régional des Pyrénées Ariégeoises. At Saint- Martory, if you need to make up time you can join the A64 autoroute, heading west to Tarbes; prettier, though, is the D817 which takes you on a parallel course through the towns of Saint-Gaudens, Lannemezan and Tarbes.

A short drive south of Tarbes is Lourdes, undoubtedly the most religious town in all of France. For most of its existence, it was just a sleepy market town. But then, in February 1858, while fetching firewood, a 14-year-old peasant girl called Bernadette Soubirous saw what she believed was the Virgin Mary in a local grotto. Over the next few months the apparition appeared a total of 18 times. The Catholic Church investigated her claims and later deemed them to be true. Soubirous was eventually canonised while the grotto became a religious shrine, now known as the Grotte de Massabielle.

Whatever Soubirous might have seen, one thing is indubitably true: thanks to her, Lourdes is now one of the world’s most important pilgrimage sites, drawing well over five million visitors a year from all over the world, many of them invalids convinced of the miraculous healing power of the waters which spring from the grotto. According to the Church, some people have successfully been healed.

Unfortunately, thanks to all the religious tourists, modern Lourdes is now drowning in cheap hotels and tatty souvenir shops offering everything from Jesus snow globes to chintzy Madonnas. Whether you’re religious or not, it’s definitely worth a visit though, if only to understand the power of religious faith.

Back on the A64, and suitably charged with religious fervour, you’ll soon find yourself arriving in Pau (which, by the way, rhymes with ‘snow’, not ‘now’). This beautiful city has been luring British and American tourists since Victorian times, thanks to its strangely mild climate (it’s not unusual to enjoy 20°C on midwinter afternoons), its spas, and the parks full of sub-tropical plants.

On foot, head for the town’s most famous street, the Boulevard des Pyrénées. Stretching east-west for over a mile, and lined with 19th-century mansions, hotels and cafés, it’s essentially one long viewing terrace, offering superb vistas of the Pyrenean mountains to the south, including the distinctive double summit of Pic du Midi d’Ossau. The 19th-century author Alphonse de Lamartine wasn’t wrong when he wrote: “Pau has the world’s most beautiful view of the Earth, just as Naples has the most beautiful view of the sea.”

At the western end of the boulevard is the Château de Pau, now a national museum. It was here, in 1553, that the first Bourbon king of France, Henri IV, was born, his cradle supposedly an upturned turtle shell, which is still on display today. North of the château is the charming old town. Less than 300m in diameter, it offers hilly, cobbled streets, bars, restaurants and antiques shops. It’s also the start of the famous Rue du Hédas: formerly a giant sewer, in 2016, it was transformed into a pedestrian promenade, with bars, restaurants, gardens, light installations, a playground and a boulodrome. Fortunately the sewer is long gone.

Pau is also very well-served by sports facilities. Down on the Gave de Pau river, there’s rafting, kayaking and canoeing, plus a whitewater centre, Parc Aquasports. Pau claims to have continental Europe’s oldest golf club, originally established in 1856 by two Scottish army officers, as well as France’s first rugby club, dating back to 1902. Every year, Pau stages two Grand Prix: one is a motor sports event featuring a street circuit around the city’s public roads; the other is a famous steeplechase horse race at the Hippodrome du Pont-Long.

The beautiful city of Pau © Shutterstock

Carry on west along the A64 autoroute and you will soon find yourself in the French Basque Country (Pays basque français, in French, or Iparralde, in Basque). It’s the westernmost section, formerly known as Labourd, that is most famous. Here you’ll find vast sand dunes bombarded by big surfable waves, and fishing villages-turned-tourist traps.

There’s the ultra-chic coastal city of Biarritz, full of five-star hotels, with a casino, spas, jewellery and fashion shops and lots of upmarket bars. Just to the north is the cool surf town of Anglet; to the south there’s the thriving holiday resort of Saint-Jean-de-Luz; and slightly inland, you’ll find the distinctly Basque town of Bayonne. Bayonne certainly knows how to party, and it’s here that our Pyrenean odyssey finishes with a bang. At the end of your road trip, be sure to immerse yourself in Basque culture. Listen carefully and you’ll hear people speaking the language in the streets; you’ll notice that there’s separatist graffiti on the walls, games of pelota in the frontons, and plenty of Bayonne ham and Espelette chilli.

The fishing town of Saint-Jean-de-Luz is a haven for tourists, with attractions galore, including a rich roster of festivals © Shutterstock

End with a Party

If possible, aim to arrive in time for the annual Fêtes de Bayonne. Staged at the height of summer, this five-day festival attracts close to a million visitors, all dressed in white clothing with red neckerchiefs and belts, and all ready to party hard. Featuring bullfights and a running of the bulls – like in Pamplona, only on a smaller scale, and much safer – it claims to be France’s biggest festival, and one that members of the French Basque diaspora do their utmost to attend. Once the sun goes down, and the flow of alcohol increases, the party gets raucous. After five days of festivities, it’s just as well all your driving will be complete.