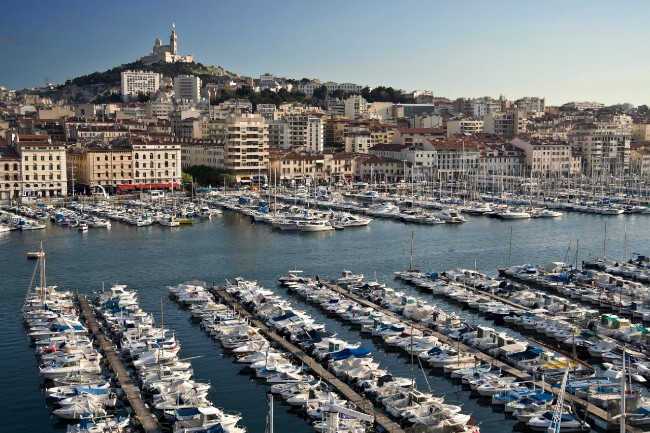 Whilst Marseille has always been a hub of activity thanks to its status as one of France’s major ports, it has now grown to be not only the country’s second-biggest city but also one of its most diverse, and most interesting. You’ll only scratch the surface of Marseille in a weekend, but you’ll be enticed to come back for more… The city’s strong culinary scene, laid-back creative vibe, and wealth of independent shops, bars, and restaurants make for a relaxing weekend away sipping pastis and enjoying the sunshine on France’s Mediterranean coast. 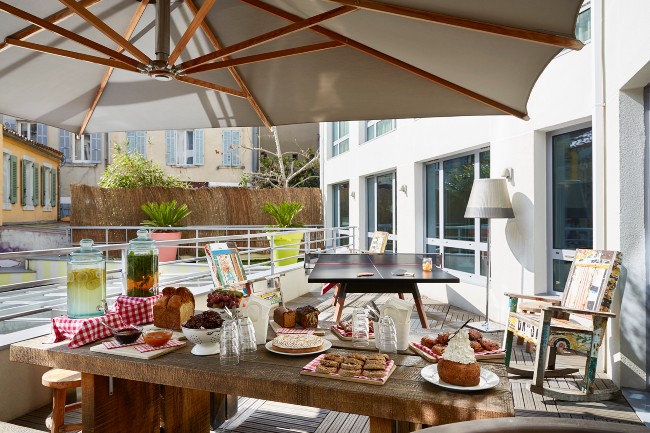 Mama Shelter knew was it was doing when it set up one of its hip hotels just a 10-minute walk from Cours Julien, Marseille’s colourful and creative district which pulls in a similar crowd to Mama’s jaunty abodes. The surrounding residential neighbourhood also gets you off the well-beaten tourist path to see a more authentic side of Marseille. Once inside the hotel you can expect all of the usual Mama Shelter features including Philippe Starck-designed bedrooms, a contemporary urban style (think concrete walls and a bold mish mash of colours), and a buzzy bar and restaurant serving up drinks and dishes inspired by Marseille, including a dedicated pastis menu. 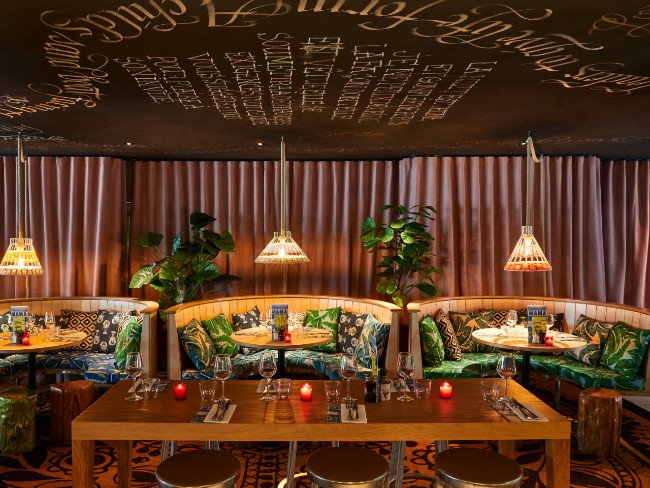 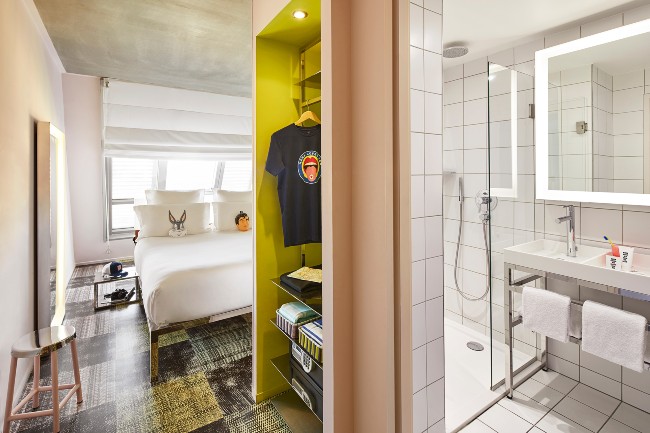 For those who prefer a more retro style, and a more peaceful stay, check into Pension Edelweiss. This quiet and intimate B&B has been stylishly furnished with an eclectic mix of vintage furniture and accessories which have been collected by owner Véronique Bieger. With just five individually decorated bedrooms you almost feel as though you are in your own apartment, and in the mornings, a breakfast feast is served on the kitchen table for everyone to tuck in together. It’s also a good choice for those who want a more central location closer to Marseille’s major sights; it’s just a five-minute walk from Marseille Saint Charles train station and 10 minutes by foot to the Old Port. 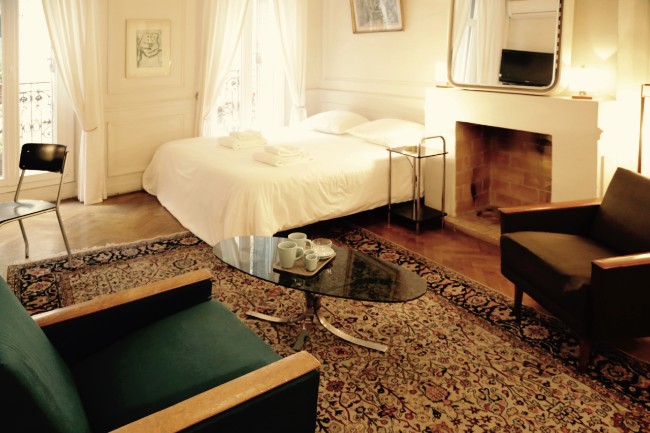 At the award-winning La Mercerie British chef Harry Cummins– who arrived here by way of London and Paris (including a stint at Grégory Marchand’s famous Frenchie)– champions seasonal, local produce with a heavy focus on wonderfully fresh, homemade pasta. The service is fantastic, the set menus are great value (two or three courses at lunch will set you back 25/29€; 5 courses at dinner will be 48€) and the food is some of the most exciting and delicious in Marseille. Unlike other restaurants, it’s also open on a Sunday. 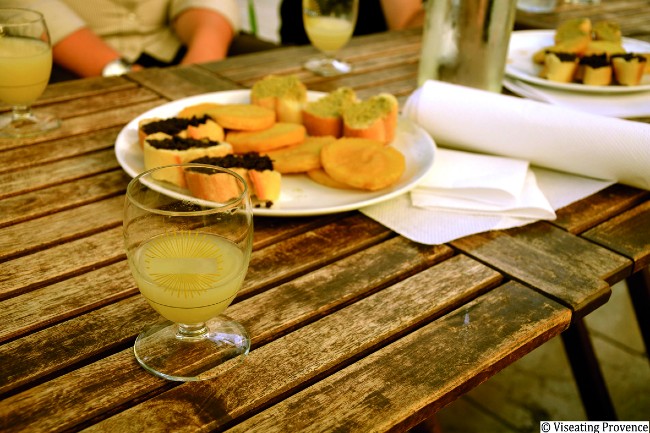 The Cité de l’Agriculture is an association in Marseille with a strong focus on food sustainability: according to them, Marseille imports 90% of what it eats, whilst sometimes exporting exactly the same produce. To reduce the carbon emissions from trucks heading in and out of the city, and to promote local food, the association has opened its own restaurant, La Cantine, open Monday to Friday for lunch with a regularly changing set menu. Except for the meat, what you eat is what they’ve grown, with the fruits, vegetables, and herbs all coming from the association’s own garden outside Marseille, although the plan is to make things even more local by moving the garden inside the city limits. It’s not only good for the environment, it’s also incredibly tasty and well-priced: two courses are set at just 14.50€ and three at 18€. And as it’s just a seven-minute walk from the station, Cité de l’Agriculture is a great spot for lunch before you leave. 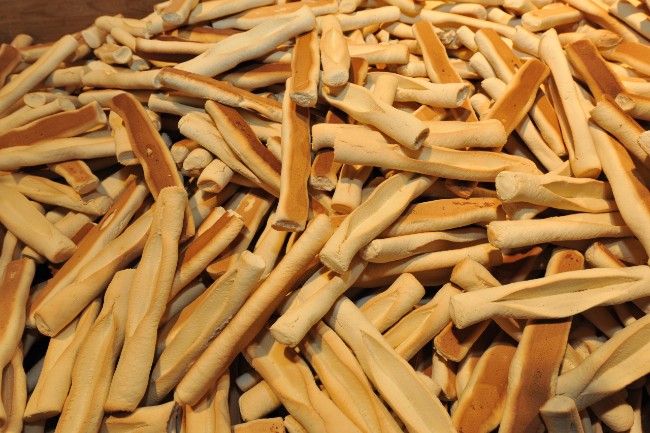 Navettes are one of Marseille’s food specialities: a simple boat-shaped biscuit which is scented with orange blossom and traditionally enjoyed at Candlemas. Four des Navettes, which is the oldest bakery in the city, has been handmaking navettes since 1781, and still uses the same 18th century oven to bake them. It’s commonly agreed on as the best place in Marseille to buy them, and the Archbishop of Marseille himself must agree, as he comes to the bakery on the morning of Candlemas to bless the ancient oven and its biscuits. 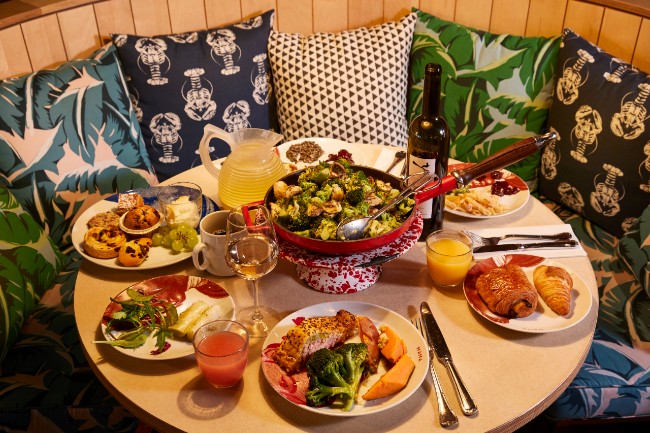 With many Italians making Marseille their home during the 20th century, the city’s cuisine shows a strong influence from its Mediterranean neighbour. One of the best places to experience it is at La Cantinetta, which serves up Italian classics such as linguine alle vongole and rigatoni all’arrabbiata, and showcases some of the French and Italian desserts which have made both countries well known for their indulgent sweets. And if this isn’t reason enough to visit, you’ll also find a leafy hidden terrace inside for al fresco dining on balmy summer evenings.

Located on the famous Canebière, Plauchut is Marseille’s oldest pâtisserie, and feels like a memento of how the street once was before it was overtaken by chain stores and cheap eateries. Pop in to the family-owned pâtisserie to pick up cakes, biscuits, navettes, or bags of the traditional Provence treat, calissons. At the back of the shop is an old salon de thé where you can enjoy a coffee and croissant for breakfast or an afternoon goûter (the French equivalent of tea time). 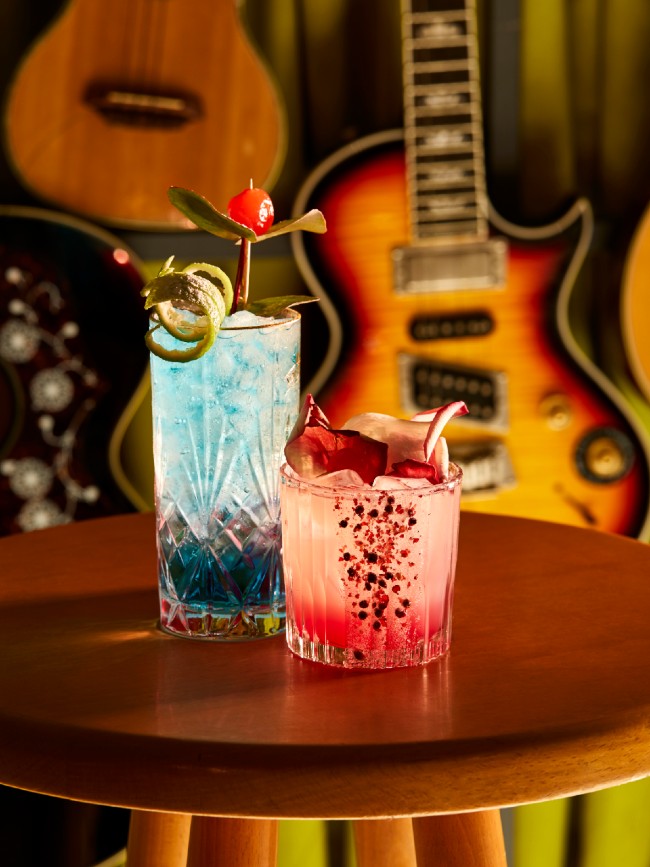 If you’re hankering after brunch, La Fiancée is one of the most popular spots with the locals. The crowd-pleasing menu includes breakfast favourites such a pancakes, bacon and syrup, eggs on toast, and porridge topped with fresh fruits as well as a range of artisan coffees: come here to get your V60, flat white or cold brew fix. 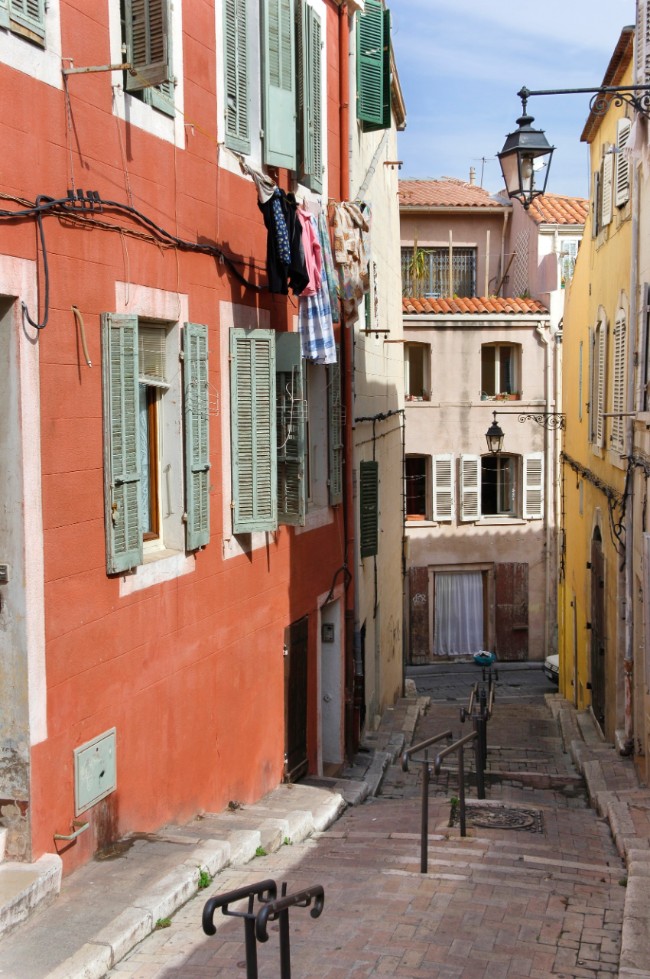 One of the most pleasant ways to while away an afternoon is Marseille is by getting lost in the streets of Le Panier, the city’s old town. You’ll recognise the area once you find yourself within its old narrow lanes, but generally a good starting point from behind the InterContinental Marseille hotel, which as a former hospital, known as the Hôtel Dieu, has a long history of its own. From here you can simply enjoy a wander, popping in to cafes and the quarter’s independent boutiques, but there are also some other sights to look out for, including the Hôtel de Cabre, built in 1535 and one of the oldest townhouses in Marseille, the Accoules church, originally built in the 6th century and then rebuilt in the 13th, and the Maison Diamantée, a listed building which was inhabited by some of Marseille’s wealthiest families until the French Revolution. If you want to get deeper in to the history, you can also take a guided tour on Saturdays (in French or English) priced at 10€ and available to book online. 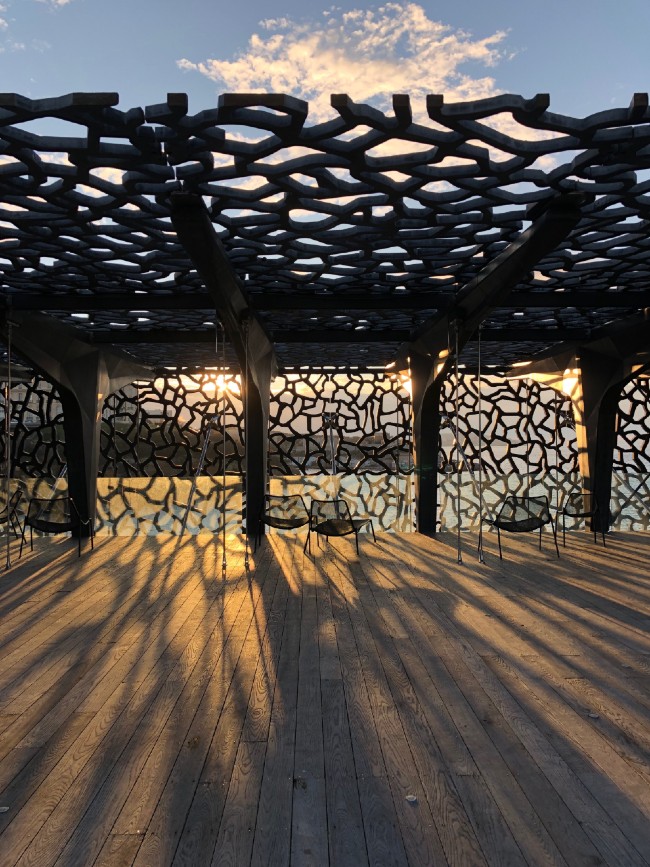 Located on the entrance to the port, the Museum of Civilisations from Europe and the Mediterranean, more commonly known as MuCEM, is Marseille’s main museum. The boldly designed building, which was imagined by architect Rudy Ricciotti, houses a unique mix of artifacts, (ranging from artwork to agricultural machinery), to take you on a journey from the prehistoric Mediterranean civilisations to the present day. You can also catch temporary art exhibitions, enjoy a guided tour, and continue your visit at the 12th century Fort Saint-Jean (accessible via a walkway above the water) where you’ll find collections of Mediterranean art and traditions, a Mediterranean garden, a café and a bookshop.

Whilst its probably the most touristy spot in Marseille, no trip to the city would be complete without a visit to the historic Vieux-Port de Marseille (the Old Port of Marseille), which still to this day feels like the very heart of the city. It’s also where you can of course, pick up the ferry boat for a trip out on the water, and take a stroll under the Ombrière, a huge mirrored structure created by Norman Foster. If you’re there between 8am and 1pm you’ll also find the Marché aux Poissons (Fish Market) where the local fishermen sell their catch fresh off the boat. Also look out for the lady selling the shells known as Eye of Saint Lucia (or Lucie) to take home as a souvenir, which are believed to bring good luck.

The best view of the city can be found from the city’s most famous symbol, Notre-Dame de la Garde, which sits high up on Garde Hill overlooking Marseille. You can visit both parts of the basilica, the vaulted low church with a crypt and the high church in a Roman-Byzantine style, and from the outside admire the impressive statue of the Virgin Mary on the bell tower, which was constructed in bronze and covered with gold leaf in the Christofle studios in Paris. It seems only the brave walk up to the hill (make sure you’ve packed comfortable shoes if you do); the majority take the number 60 bus from the Old Port, although walking back down at least would be an easier option if you do want to stretch your legs.

Don’t miss a trip to Maison Empereur, a droguerie dating back to 1827 which stocks everything from household cleaning products to baking accessories and pretty tableware; it even has its own café inside. It’s a great place to pick up big blocks of Marseillaise soap, or pop into the sister shop opposite for traditional clothing such as sun hats and sheepskin slippers.

If you love the thrill of browsing brocantes and flea markets in search of treasure, head to Jolie Rouge to browse through racks of well-priced vintage clothing and a good selection of home ware, including pretty flower-printed plates, crystal cut glasses, and old bottles printed with the labels of Marseille’s signature drinks, Ricard and Pastis 51. If you’re lucky, the shop bar’s might also be open for a drink when you arrive.

Created by a former food journalist, Epicerie l’Ideal is the place for foodies looking to pick up a gourmet treat for home. There is a strong focus on Mediterranean products, not only from the south of France but also countries such as Italy, with the shop selling everything from charcuterie to cheese, fresh bread to pasta, and bottles of oil olive to jars of condiments. You can also stop for lunch to enjoy fresh (and very veggie-friendly) dishes that take inspiration from across the Med.

For more information on Marseille, the city’s tourist board is an excellent source of information, and can be found online here. 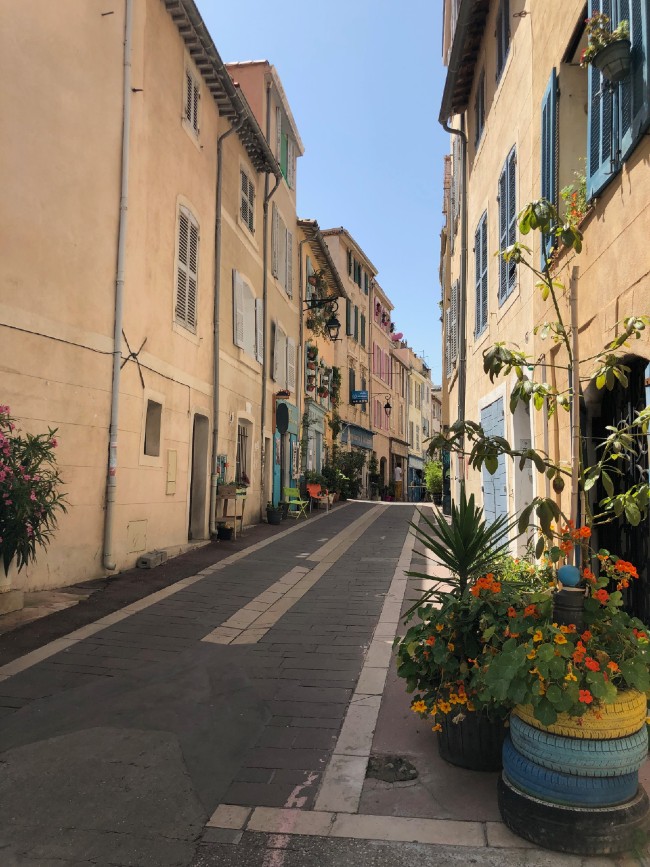 Previous Article What’s Hot in Paris for 2020
Next Article Paris Memories: Reflections During the Coronavirus Pandemic