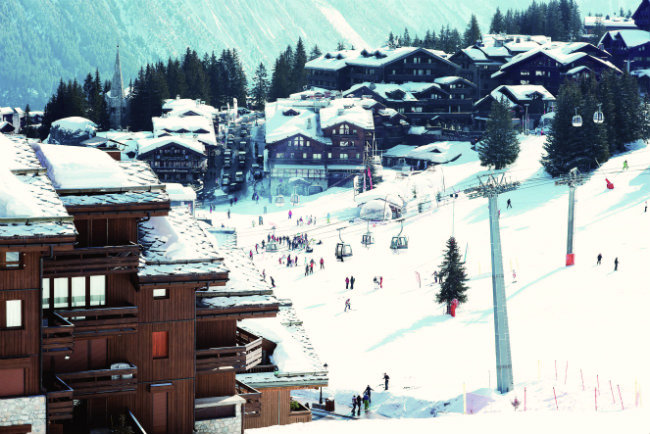 One of the largest and longest-established ski resorts in the world, Courchevel was created from scratch in 1946 and now has an international reputation. The resort is situated in Les Trois Vallées, at one end of the largest ski area in the world, which features 600km of pistes and more than 170 lifts. Its north-facing slopes ensures some of the best snow in the region, and it offers a range of terrain to suit all tastes and skill levels. And, thanks to its location plus the resort’s pioneering work in snow-making, grooming and maintenance, Courchevel can guarantee good snow cover throughout the season.

Though referred to by the single name, the resort is actually four separate villages: Courchevel Le Praz 1300, Courchevel Village 1550, Courchevel Moriond 1650 and Courchevel 1850, the biggest of the quartet. Known as the St. Tropez of winter sports, Courchevel 1850 is seen as the place to stay, and is populated by wealthy Parisians and Russians, royal families and celebrities. With an extensive collection of palatial hotels, luxury chalets and boutique shops, it’s undoubtedly expensive but the other villages are far more affordable. 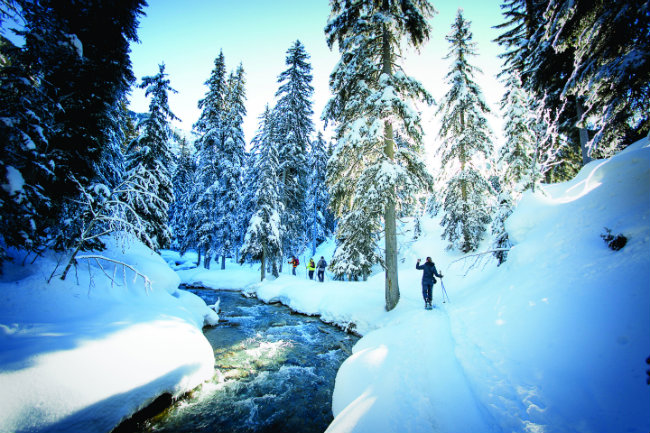 While this attractive resort is understandably popular over the winter months, it also works hard to entertain visitors during the summer too, with a range of events and activities. One of the biggest attractions is simply the surrounding natural beauty: the resort sits on the edge of the Vanoise National Park, which offers stunning vistas, the Merlet Alpine lakes and a variety of flora and fauna to keep hikers and ramblers of all standards occupied.

Moriond 1650 is home to the Aquamotion Centre, which features swimming and diving pools, a surf pool with artificial waves, a water slide, wild water rapids, saunas, hot tub and climbing wall. You can also book helicopter sightseeing trips, and the view from the top of La Saulire cable car ride is stunning at any time of year. For more information, visit www.courchevel.com. 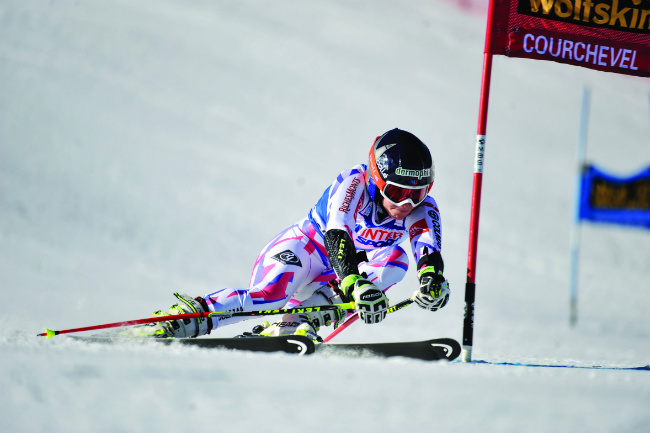 Events throughout the year often include ski championships; the Pyrotechnical Art festival; Snow & Ice shows, when the slopes are alight with torch-lit descents and fireworks; and end-of-year celebrations: For three weeks over January and December, Courchevel transforms into a snowy magical kingdom with visits from Father Christmas and his elves, and featuring a range of après-ski shows and events for all the family. 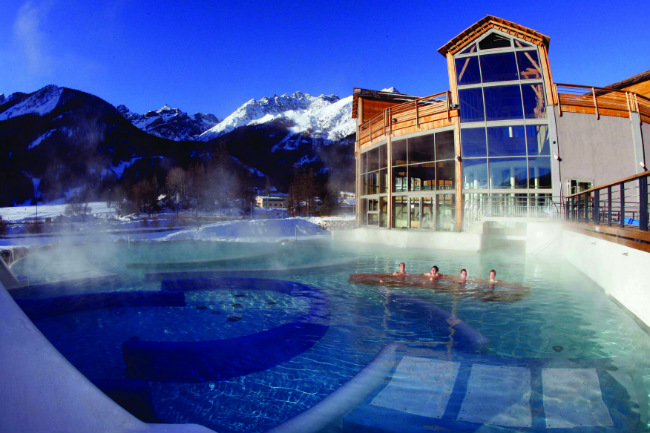 Serre Chevalier Vallée is one of the largest ski resorts in France, covering 410 acres of pistes. It encompasses three Alpine villages – Le Monêtier, Villeneuve and Saint-Chaffrey – plus the UNESCO World Heritage town of Briançon. This charming 17th-century fortified town is the highest in France and offers visitors a range of traditional auberges, pâtisseries and restaurants.

The valley runs north-west to south-east, below the slopes of the range that gives the resort its name. It’s notable for its high tree line with pretty woodland runs at altitudes between 1,200m and 2,800m.

The family-centric resort has loads to offer skiers of all levels, with night skiing, the VideoZone, which films you as you descend the mountainside, and First Tracks, enabling early risers to ski on fresh, untracked snow. Old-school skiers can also try the Brut de Neige zone, which lets you go ‘off-piste’ without the usual risks.

Non-skiers have a variety of activities, with snowcat tours followed by dinner in the mountains, or a visit to the ‘snow factory’ to see the work of the technicians as they prepare the slopes for the day ahead. For more information, visit www.serre-chevalier.com 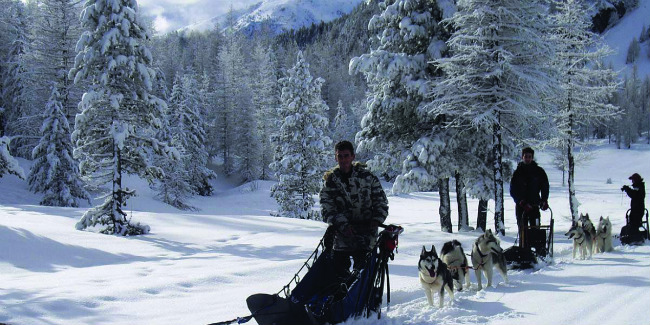 Dog Sledding: From Dec to April, live out your Arctic adventurer aspirations with dog sledding across La Salle-les-Alpes. 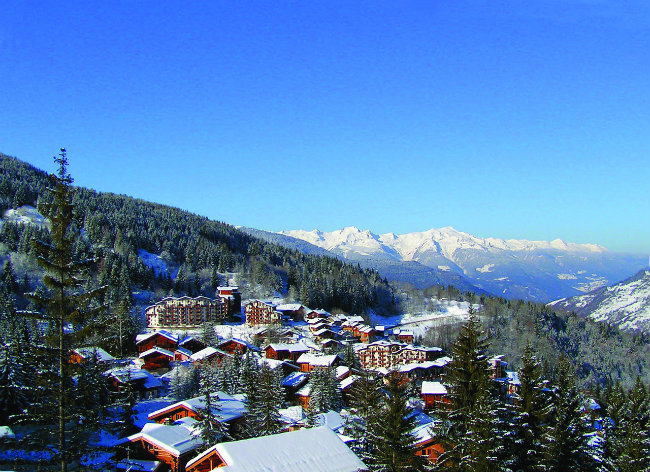 This modest resort resides in the heart of Les Trois Vallées, between Méribel and Courchevel. Purpose-built for the 1992 Winter Olympics, when it housed journalists and athletes, it’s both the youngest of all the French Alpine resorts, and also one of the lowest at just 1,350m. It’s cheaper and quieter than its larger neighbours, but has easy access to both, by bus or taxi.

Sitting pretty among the trees, the resort is a collection of attractive wooden ski-in/ski-out chalets, and though small – with just 4,000 beds – it does have a range of affordable bars and restaurants. The village is traffic-free and family-friendly, with a central nursery slope and a year-round programme of activities for kids and parents.

The slopes around La Tania and nearby Le Praz are wooded, which makes them ideal when the bad weather rolls in. The size of the resort also means they’re largely free from crowds, and further up there are some challenging runs for more adventurous skiers. The gondola from the village takes you to Praz-Juget with ski lifts to the slopes above Courchevel 1850, and to Col de la Loze above Méribel. For more information, visit www.latania.com 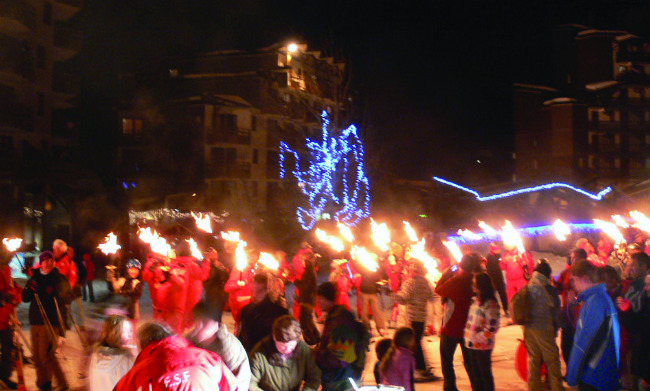 Year-round events include Children’s Fortnight in February, when the resort lays on a host of free, daily entertainment aimed at kids, including street theatre and shows. There’s also  Family Charity Day in April, a big day of fun with bouncy castles, raffles, an egg hunt, a slalom race, auctions and more – all in aid of local charities. 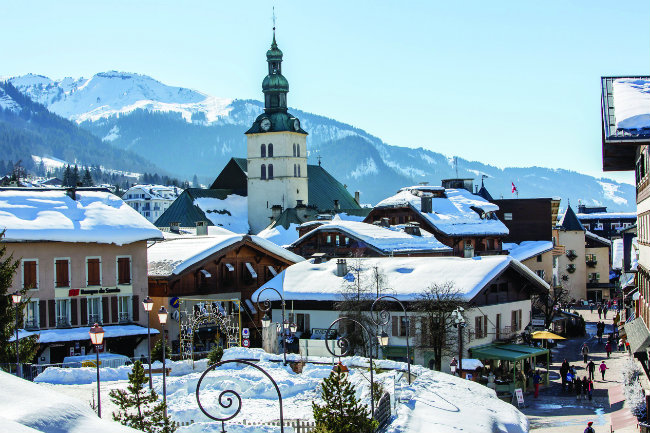 Located south of Sallanches and west of Chamonix-Mont-Blanc, Megève is generally regarded as one of the prettiest ski resorts in the world. It started life as a tannery town, but was turned into a resort at the start of the 20th century thanks to the influence of the Rothschild family, who wanted to create an alternative to St. Moritz. As such, Megève features a lot of the old-world charm that newer resorts lack: its a picturesque town with rows medieval houses and cobbled streets, and a main square dominated by a 14th-century church. Some of its older hotels and chalets are now designated historic buildings.

Megève is part of Evasion Mont-Blanc, with more than 200 pistes covering 445km. The main skiing areas are on Rochebrune and Mont d’Arbois, the two ridges that straddle the town, with a range of moderate challenges to suit all ages and skills, although expert skiers should look elsewhere. The low altitude means a lot of the runs are on beautiful treelined slopes and have stunning views of Mont Blanc.

Classy and chic, Megève isn’t really a snowboarding kind of town, but that hasn’t stopped it building two parks, one with a half-pipe. For more information, visit megeve.com 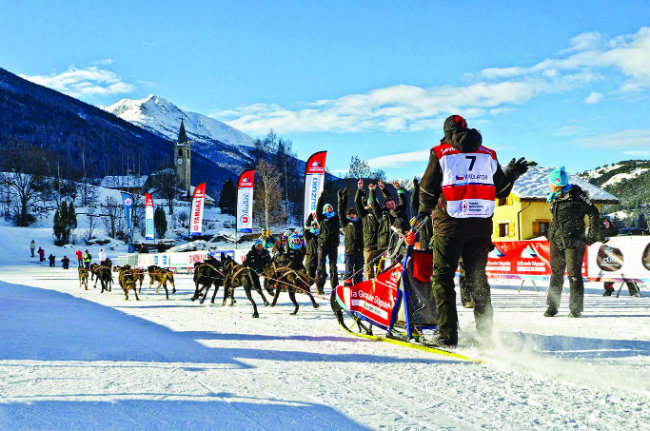 There are numerous popular events, ski races, and festivities. La Grande Odyssée Savoie Mont Blanc is one of the world’s most difficult dog sled races. It snakes its way between resorts, including Megève. Visit grandeodyssee.com

There’s also DanceSport in April. Latin and ballroom fans, head to the Palais des Sports for the annual competition. And a spring Jazz Festival. Visit www.jazzamegeve.com 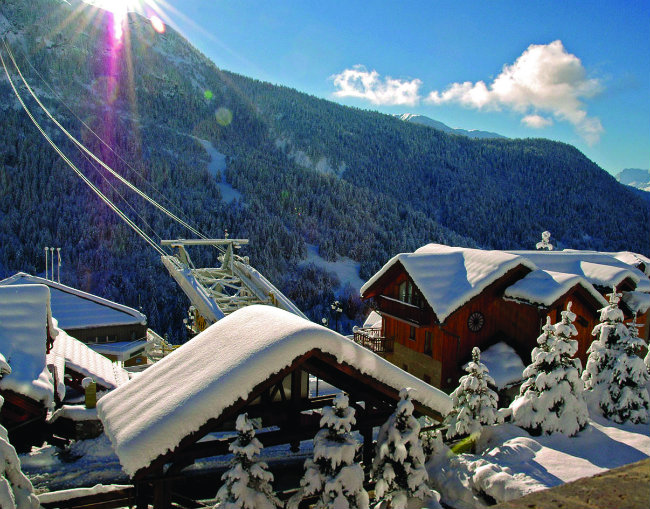 When the French government initiated a huge hydroelectric project in the late 1980s, a small, run-down village 27km east of Grenoble sold its land and became unexpectedly wealthy. The populace promptly invested in the creation of chalets and the building of a giant cable car linking the resort to the vast Alpe d’Huez ski area.

The pistes of Montfrais above the village are ideal for families and beginners, while experienced skiers looking for a sterner test are well catered for: the 160-person cable car will whisk you to the Dôme des Petites Rousses at 2,800m in just a few minutes, and from here you can travel up to Pic Blanc, which at 3,330m affords breathtaking views of Mont Blanc, the Grand Paradis, La Meije and the Écrins National Park – plus some thrilling off-piste action.

After a day of hitting the slopes, the remote location of Vaujany means that you can look forward to a quieter aprés-ski than some of its noisy neighbours. The locals have also invested in an excellent crèche and a sports centre with heated swimming pool, watersides and paddling pool – earning the resort a coveted ‘Famille Plus’ label. For more information, visit www.vaujany.com

The sports centre at Vaujany

L’Espace Loisirs: Vaujany’s sports and leisure complex offers plenty of family activities if the skiing is off, and a place to rest and recuperate after the rigours of the slopes.

Montfrais: The slopes above Vaujany feature a snow park, where beginners can take on slides and jumps in safety, while learning the rules of the mountain.