Travel to Colmar: Birthplace of Bartholdi, Creator of the Statue of Liberty 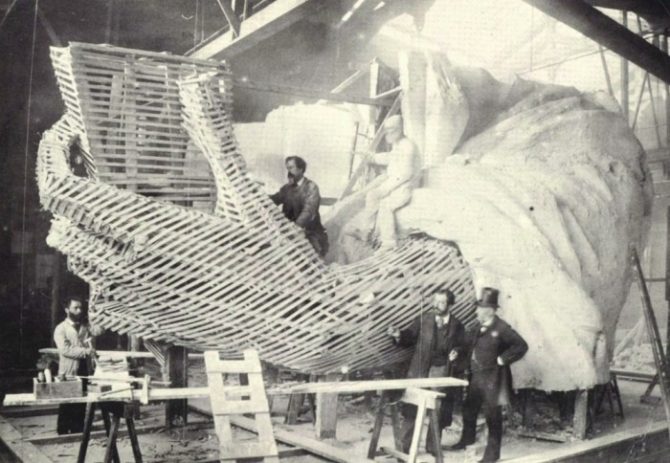 The picturesque city of Colmar in the Alsace region of north-eastern France has many claims to fame – it’s a major destination on the Route des Vins d’Alsace, boasts a wonderfully preserved medieval vieille ville of colourwashed, half-timbered houses and is home to the much celebrated and glittering Christmas fairs and markets. In the cultural sphere, the Musée Underlinden is rightly revered for its treasure trove of medieval art and the magnificent Isenheim altarpiece. Surprisingly less well known is the lifelong connection between Colmar and the once-famed sculptor Frédéric Auguste Bartholdi (1834-1904), the creator of the Statue of Liberty.

The sculptor’s former birthplace and home, on Rue des Marchands, was donated to the city in 1907 and is now home to the intimate and carefully curated Musée Bartholdi. Sitting proudly in the courtyard is the beautiful bronze Les Grands Soutiens du Monde (1902), with the figures of ‘Justice’, ‘Patriotism’ and ‘Work’ supporting the globe.

Bartholdi’s Mother, Charlotte, inherited considerable wealth upon the premature death of his father when the boy was just two years old. The young Auguste was to become the apple of his mother’s eye and, with a strict agenda, she indulged his artistic sensibilities and precocious talents. The widow Bartholdi widened her son’s horizons by taking him on trips to London to see the Great Exhibition of 1851 and, later on, a tour of the grand châteaux and monuments of France.

Keeping their home in Colmar for holidays, the family moved to Paris, where Auguste’s natural ability for drawing was encouraged and he eventually became apprenticed to the established religious artist Ary Scheffer. By the age of just 21, Bartholdi had already completed several major examples of bronze statuary, including The Good Samaritan (1853) and The Legend of the Seven Swabians (1855), both of which can be seen in the Musée, and also the figure of General Rapp (1856), which sits imposingly above the Place Rapp in Colmar.

Following in the footsteps of his mother, the young Bartholdi became a great traveller and found even further inspiration for his art during trips to Egypt and Italy to see the monuments and works of the great masters.

Gradually, after winning a number of public competitions and commissions, Bartholdi’s reputation began to rise and his work would eventually grace the public parks and squares of cities beyond his home town, including Paris, Reims, Rouen, Avallon, Corsica, Lyon, Belfort (The Lion of Belfort, 1880) and Clermont-Ferrand.

His statuary demonstrates not only great technical prowess but also a tremendously fine emotional sensitivity to posture, gesture and the subtleties of the human face, a rare ability which must have derived from his other talents, as a painter and sketch artist. These qualities can be clearly seen in the many preliminary plaster models on display in the Museum.

The precise conception of that splendid and most iconic statue, Liberty Enlightening the World, better known as the Statue of Liberty, is somewhat unclear. What is certain is that Bartholdi had conceived of a similar tall figure holding an arm aloft, as a statue and light-house for the entrance to the Suez Canal, as early as 1867. That project never came to fruition but the creative seeds were planted, and when Bartholdi visitedthe United States for his first trip in 1871, he saw the future site for Liberty on Bedloe’s Island in New York Harbour. With the support of the Franco-American Union, the project gained momentum – preliminary drawings were made and models built. On another trip to New York in 1876, he revealed an early piece of the monumental statue, to great acclaim.

The Musée Bartholdi houses an entire floor of archive photos, drawings, models and posters that illuminate the fascinating, herculean tasks of constructing the statue, transporting it across the Atlantic and the grand ceremonies which accompanied Liberty’s inauguration in 1886.

It is fascinating to discover that the interior of Liberty was constructed by Gustave Eiffel’s engineers, using an innovative metal framework upon which the copper skin was hung – a much lighter and stronger system than had originally been conceived. A photograph in the Musée shows the entire statue standing in central Paris in 1884, towering above the Haussmann-era apartment buildings.

Liberty became an enormous tourist attraction in France before it was dismantled and prepared for the long Atlantic voyage. Some three hundred pieces were stowed and transported on the French Navy frigate Isère, with Bartholdi and his wife on board – how they must have prayed for a calm journey! Fortunately, the ship arrived safely, construction work began and in October 1886 the final rivets and bolts were put in place, ready for the magnificent inauguration festivities. An illustrated print published by Harpers is on display in the Musée, showing hundreds of ships in the harbour, over-flown by the graceful arcs of a thousand fireworks. It must have been quite a celebration and was a highpoint in Bartholdi’s career.

The Musée contains a reconstruction of Bartholdi’s Parisian apartment – study, dining room, music room and living room, featuring a collection of family portraits and some fine 18th-century china. It also boasts models and reduced scale copies of his other grand oeuvre, The Lion of Belfort.

Beyond the museum itself, Bartholdi also designed seven monuments for Colmar, which still stand today – perhaps the most famous and photographed being the Petit Vigneron (1869) and the Roesselmann Fountain (1888). Also impressive is Bartholdi’s statue of Admiral Bruat (1863), which is set in a modern fountain amid the gardens of the Champs de Mars, a little outside Colmar’s vieille ville.