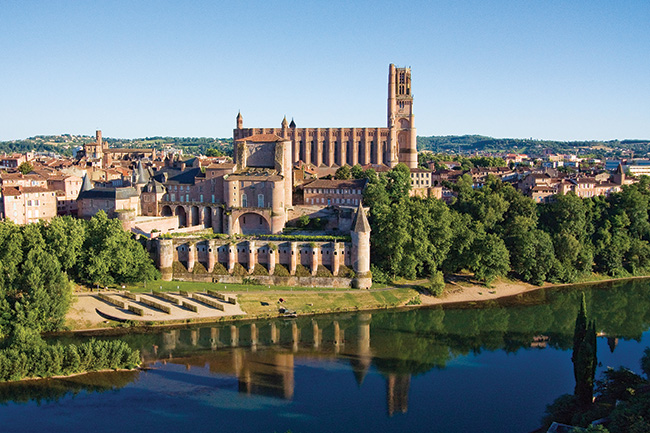 The birthplace of Toulouse-Lautrec, Albi boasts big-hitters and hidden gems side by side. Justin Postlethwaite shows you where to look.

Often a city’s most intriguing architectural gems, its enjoyably quirky historical yarns or much-needed havens of urban tranquillity are somewhat concealed, never to be spied by a first-time visitor who is armed only with a checklist of ‘the essentials’. It’s usually thanks to a deep dive into a history book or an illuminating tour in the company of an in-the-know tourist office guide that one is encouraged to veer off the well-trodden path.

This might be applied to first-timers in the majestic, impossibly attractive Tarn town of Albi, a riverside wonder about an hour by car to the north east of Toulouse in Occitanie, and a World Heritage Site since 2010. Spotting the ‘big guns’ here is a no-brainer, easily done and as rewarding as you would expect – and we will get to the iconic Sainte-Cécile Cathedral and the Toulouse-Lautrec Museum, housed in the adjoining former Bishops’ Palace, later.

But first, I have picked four concealed wonders, all of which are handily placed near the central Place Sainte-Cécile. Just a few short metres along rue Mariès from the tourist office, gaze up to admire a multi-epoch edifice and its differing strata of brickwork – this is the collegiate Church of Saint-Salvi, named after the city’s first bishop in the 6th century. A little further along, turn right into the Place du Cloître, a pretty, restaurant-lined courtyard (where I spot some rubbish bins brilliantly decorated with the city’s famous pink bricks) whose arcades lead to a delightful cloister. Built in 1720, it is a perfect spot for a little contemplation, summer shade or repose.

The next secret coin where one might feel as if in a small village instead of a bustling préfecture, is just past the bell tower end of the cathedral on rue du Castelviel. Picture-postcard Place Savène has benches for a sit-down as well as tantalising views of the cathedral, spied in between ancient colombage (brick and timber) houses. I even pick out a cottage’s à louer sign – what could be a more idyllic HQ for a long weekend of sightseeing and shopping?

Third on my hidden treasures list is the fabulous, bijoux Musée de la Mode. Tucked up an alley off Rue de la Souque, near the indoor market, it is the passion project of fashion collector Dominique Miraille, and this year celebrates its 10th anniversary. I loved his celebratory exhibition of some of his most elegant pieces – and spied offbeat beauties, such as a moustache comb in the form of a shapely, be-stockinged leg. Affable Dominique will give you a tour if you book  in advance, while next door he offers some serious French vintage clothes and accessories for sale at remarkably affordable prices. Stock sells quickly so repeat visits are rewarded!

Finally, as you weave through Albi’s delightful side streets, an amusing architectural jewel to make a beeline for is Maison Enjalbert. This majestic 16th-century house contructed in the colombage style is a monument historique sitting on the corner of Rue des Pénitents and Rue Timbal – for ease of spotting, look out for the Caroll ladieswear shop at ground level. I learned a fine fun fact on my visit: among the deftly sculpted entrance door pilasters and capitals, you can observe a figure doing what can only be described as urinating. The thinking is that, prior to becoming a pharmacy, the building was the home of a prosperous pastel merchant (the woad or ‘blue gold’ industry to which Albi owed its great Renaissance wealth) and human urine was a requisite component to ferment dried Isatis tinctoria leaves, from which a grainy paste and then the pastel powder was made.

A city break means eating out, and for lunch, there is endless choice in Albi, from bistros to white-linen chic, quality fast food to traditional restaurants serving up local produce. One place for real foodies who wish to combine a cracking meal with a panier-filling shopping trip for great local produce to take home, is La Loge au Grain in Les Halles indoor market. Owner-chef Lionel sources all his meat and fish from fellow traders in the market, and cooks the mains fresh on the plancha to order. My duck breast brochette (€17), washed down with an invigorating glass of Gaillac rouge was a winning combination. Lionel’s rôtisserie du jour offerings, such as saucisse de Toulouse, baked jambon or pintade (guinea fowl), are fine value at €9.

To walk off lunch, why not make your way back to towards Place Sainte-Cécile, where Albi’s two show-stopping tourism magnets await. First, head to the Palais de la Berbie (or the Palace of the Bishops of Albi), then wander up the path to its side (past the entrance to the Toulouse-Lautrec museum – we’re coming to that) and onto a viewing platform over the River Tarn and its medieval Pont Vieux, as well as the magnificent classical gardens.

Built during the 13th century, the Berbie Palace is one of the oldest ‘castles’ in France, older than the Popes’ Palace in Avignon. Today, it is home to the most extensive collection of works by local aristocratic artist Comte Henri Marie Raymond de Toulouse-Lautrec-Monfa, who was born in the town’s Hôtel du Bosc in 1864. The Toulouse-Lautrec museum chronologically reveals his short, if very eventful, life story (he died in 1901), from a childhood blighted by leg injuries and hereditary bone disease – that at least allowed him to hone his gift for drawing and painting – to his latter debauched years in Paris as a poster designer and painter of brothel and cabaret scenes. When you learn about his favourite drink (which he dubbed ‘The Earthquake’) – a wine goblet filled with absinthe and cognac – you wonder how he managed even to hold a paintbrush towards the end.

The impeccably renovated palace is a superb milieu in which to enjoy the gifted artist’s oeuvre and I would say two hours is required to do the permanent exhibition justice – however, from May 17 to September 4 this year there is reason to spend way longer. Featuring important loans from the Musée d’Orsay and other European institutions, Quand Toulouse-Lautrec regarde Degas (‘When Toulouse-Lautrec looks at Degas’) will illustrate how Edgar Degas (1831-1917) influenced the young Toulouse-Lautrec. Finally, we come to Albi’s most glorious offering, and, to my mind, one of the unmissable wonders of French architecture both inside and out: Cathédrale Sainte-Cécile. The largest brick-built cathedral in the world, it measures 113m long, 35m wide and 40m high, with a bell tower topping 78m and completed in 1493. Construction began in 1282 in the aftermath of the Cathar-purging Albigensian Crusade and it has a fortress-like appearance, necessarily sturdy and imposing.

However, there are many details inside that contrast wildly with the austere exterior: a vaulted ceiling in bright blue and gold painted by the hands of Italian Renaissance artists; the remarkable, recently spruced up Choir of the Canons with 200 statues (entrance €5) beyond the marvellous lacework of the rood screen (jubé in French); and chapels adorned with bold, geometric patterns.

Spot the bone relics of Saint Cecilia (a Roman noblewoman martyred in 232 and after whom the cathedral is named) and then ponder the vast fresco of the Last Judgement, added to the western interior in the late 15th century.

The middle section is long gone, removed to make way for the organ commissioned from master craftsman Christophe Moucherel in 1734, but the mural still holds terrifying potency for those in fear of the consequences of transgression against divine law.

For me, not ticking Albi off your French city break bucket list very soon would be truly sinful.