Corsica Chronicles: A Week in Bastia 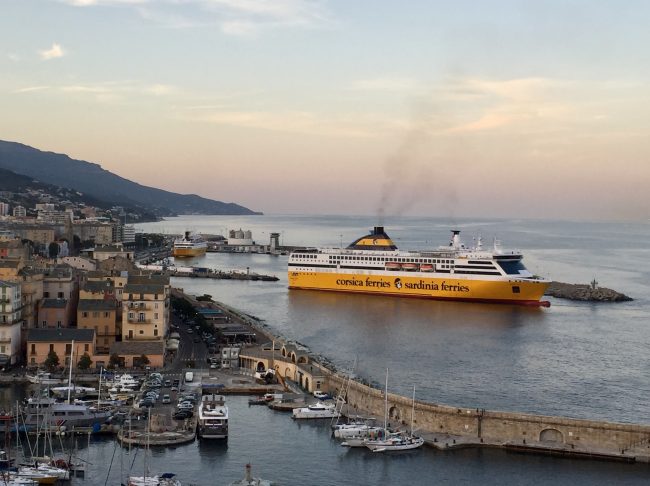 Five days in the Corsican port city of Bastia wasn’t enough for Mary Kay Seales to enjoy all that this French island has to offer, but it afforded her a tasty morsel and left her hungry for more.

I’ve been traveling to the Côte d’Azur every summer for almost 20 years now, spending more and more time in the lovely city of Nice. And in every one of these years, I have dreamed about taking one of the regal-looking blue and yellow ferries that come and go from Corsica to the port of Nice all day long. This past September 2018, I finally got it together to arrange a visit to Corsica, spending a week in the city on the northernmost tip of the island, Bastia. It wasn’t nearly enough time, and I didn’t go anywhere else, but you have to start somewhere.

The ticket for the seven-hour ferry ride, which I bought online before leaving the States, cost around $50, and on a warm day in late September, it was about as perfect a crossing on the sea as one could ask for.

Actually, two ferry lines service this route from Nice to Bastia – the blue, white & yellow Corsica Ferry line and the Looney Toons-inspired Moby line. We took the Moby line from Nice to Corsica, and the Corsica Ferry line on the return trip. I imagined all this time that I would like the classic yellow Corsica ferries more, but was, in fact, happier with the Moby ferry which was smaller, had a great deck for sitting outside, and seemed a little less formal and more relaxed.

Both ferry lines serve hot food and drinks, and there’s ample space to walk around, stretch out, and enjoy the views.

The author with Daffy & others. Photo: Mary Kay Seales 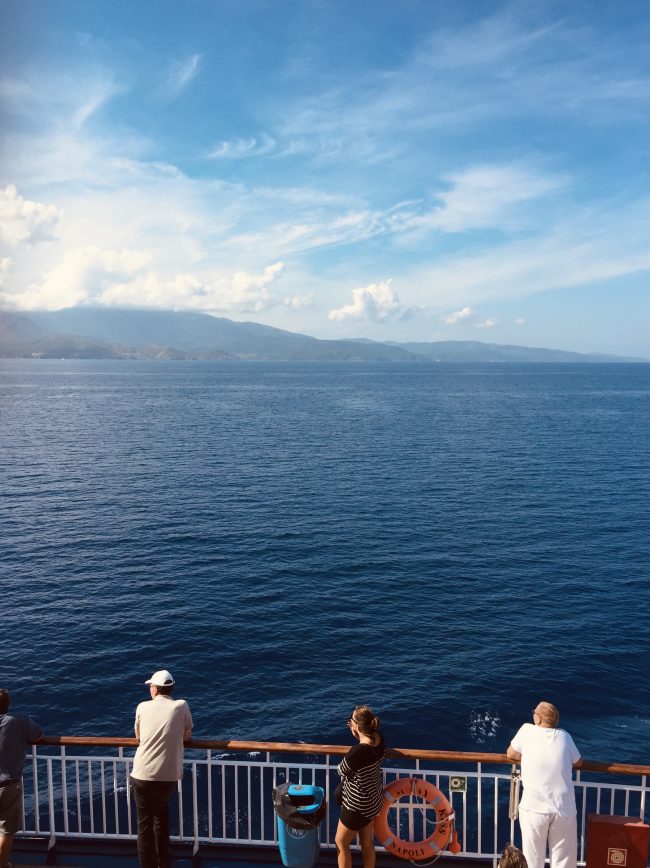 On the rear deck of the Moby Ferry “The Kiss”. Photo: Mary Kay Seales

Landing in Bastia with very little luggage (having stored the bulk of our things back at the train station in Nice), we were ready to walk to our apartment rental, but were told by several locals that our address in the Citadel area of the city was much, much too far to reach on foot. We should get a taxi, they said, several of which we could see waiting nearby. We were also told that one must call in order to get a taxi; you can’t just walk up to one and hop in. It just doesn’t work that way, they said. However, when we called, we were told that no taxis were available. Ay-yi-yi!

Since we really had no choice at that point, we decided to just try and walk, taking our time, thinking we would arrive eventually, right? And we could stop several times along the way for “refreshments.” We were quite surprised, then, to realize that it wasn’t that far at all from the ferry terminal to the Citadel, the centuries old walled city. There was one steep hill involved, but otherwise, not a problem for either of us.

Bastia is a very walk-able city, to be enjoyed on foot. The streets are a mix of old stone and cobblestone and newer paved roads. Like many cities in and around the Mediterranean, it retains its ancient history in the stones under your feet, in the narrow pedestrian streets, in its massive cathedrals and open-air markets. 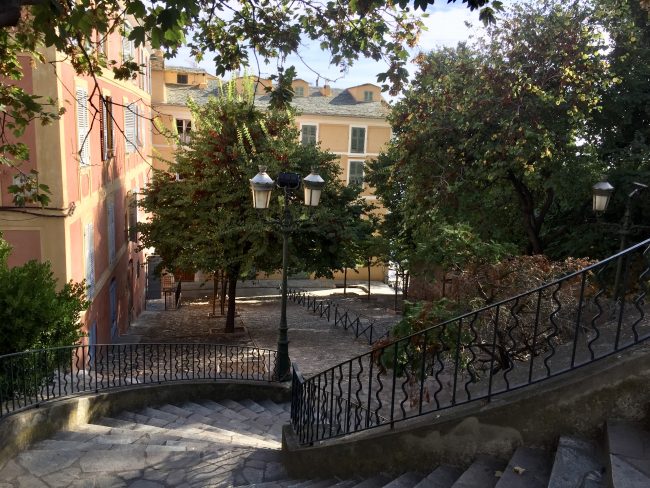 A pedestrian street leading down to the Old Port. Photo: Mary Kay Seales

When we met our landlord, I asked, rather timidly, where the Citadel was located, thinking it was a building or structure nearby. “You’re in it!” he said. “The whole walled city is the Citadel.” And we were indeed smack in the middle of it, our apartment located at the top of a 14th century building with a 360-degree view. We could see the sea and the incoming ferries from the living room windows, the massive ochre-colored Governor’s Palace and the main square from my bedroom, and views of ancient tiled rooftops from the my sister’s spacious bathroom. We felt we had hit the jackpot with this beautifully restored two-bedroom apartment.

If you want to stay in the Citadel, and are not lucky enough to get a place like this on Airbnb, there is an equally enticing hotel nearby with commanding views of the sea from the rooms, the bar and the terrace restaurant. It’s called the Hôtel Des Gouverneurs.

Though Bastia was originally a fishing village with a local population of Corsican people, it was overtaken in the Middle Ages by noblemen (so to speak) from Genoa, who began construction on the walled city and its central Governor’s Palace, which is now a spectacular museum. 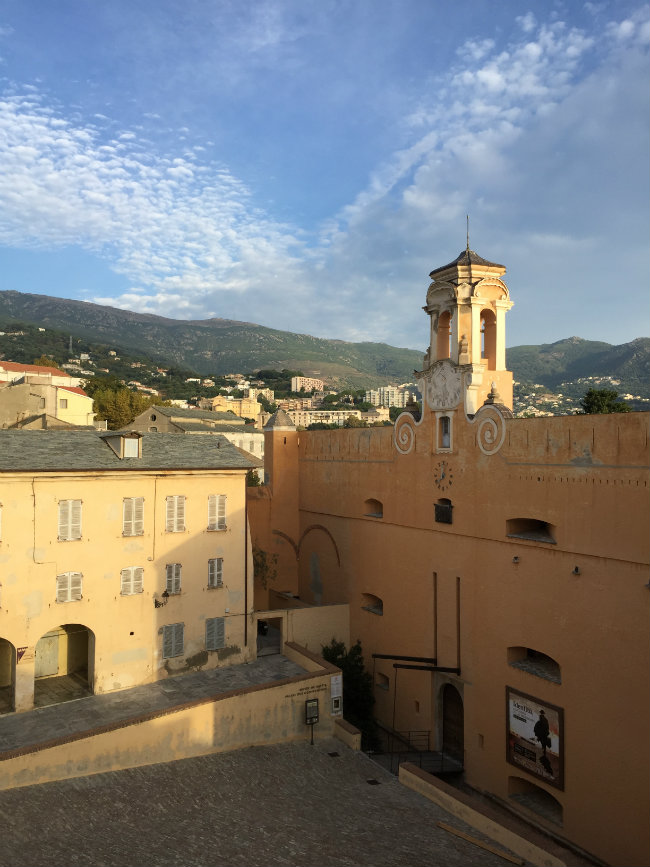 The Governor’s Palace in the Citadel of Bastia. Photo: Mary Kay Seales

All You Can Eat

It seemed, to me at least, that the entire city was made up of restaurants. No shortage of places to choose from. The Old Port area alone, just below the Citadel, is lined with restaurants from one end to the other, and all of them seemed to be packed on the warm September evenings that we were there.

Two restaurants that I can most definitely recommend are in the Citadel itself near the palace. The Coude-à-Coude (“elbow to elbow”) is a hip, cosy place with indoor and outdoor seating in a little lighted square. It serves creative small plates of seafood concoctions– all ingredients locally sourced – and a great wine menu as well. The owner/chef/waiter recommended pairings that were perfect.

Le Perchoir (“the roost”), also right in the Citadel, has the most incredible view over the harbour, and we found ourselves returning for the same dishes on two consecutive nights. The waitress, who seemed slightly gruff and unfriendly on first encounter welcomed us warmly the second night and even comped our wine – a lovely surprise. 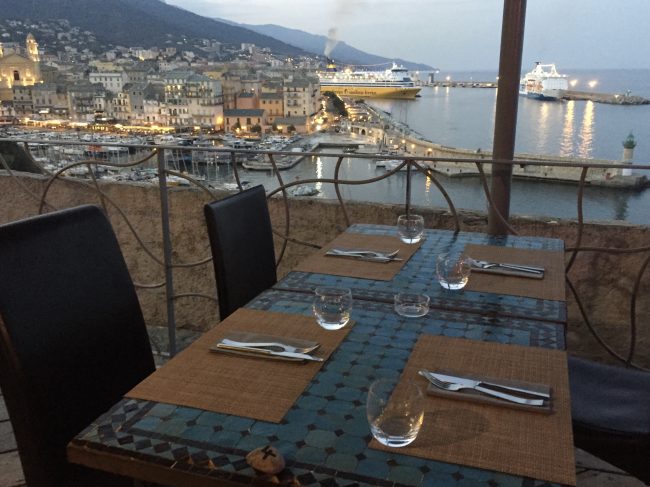 Both restaurants are moderately priced and consistently good, so much so that we didn’t venture much further than a few steps from our door to eat every night, though another restaurant, Chez Huguette, in the Old Port was highly recommended by our landlord.

Yes, But Where is the Beach?

For me, it’s all about the beach when I travel, and though I didn’t get a chance to travel to the other fabled plages of Corsica, my sister and I did find our beach in Bastia.

Though there is a tiny local beach a few steps from the Citadel, heading south on foot on the main road out of town, for a full-on day at the beach, I recommend making the slightly longer trek to Plage de l’Arinella, about two miles south of the city. You can reach it by a stroll along a beautifully manicured promenade, lined with palms and occasional benches for resting. There is also a free shuttle to this beach that leaves from the tourist office near the ferry terminal, but we enjoyed the walk. 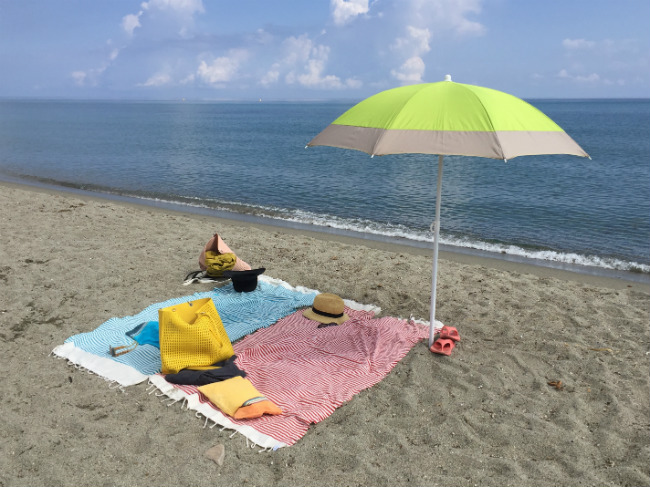 On the days we were there, Plage de l’Arinella was virtually deserted. The water was crystal clear and calm, and the warm sand felt so lovely on our feet after three weeks on the rocky beaches of Nice.

Another thing we loved about this beach was the nearby restaurant at Les Sables Rouge resort. This outdoor restaurant with a view of the sea was packed everyday for lunch with what seemed like regulars from nearby businesses.

Every Saturday in the central town square, Place du Marché, there is a lively food market, selling everything from plump roasted chickens on the spit to a Corsican specialty, migliacciole (don’t ask me to pronounce that), a piping hot pancake-like thing that melts in your mouth. Delicious!

In the other huge open square near the ferry terminal, Place Saint Nicolas, several football fields in size, is a Saturday flea market selling pretty much anything you can imagine from clothing to shoes, to old jewelry and antiques. It’s new stuff and used stuff and everything in between. 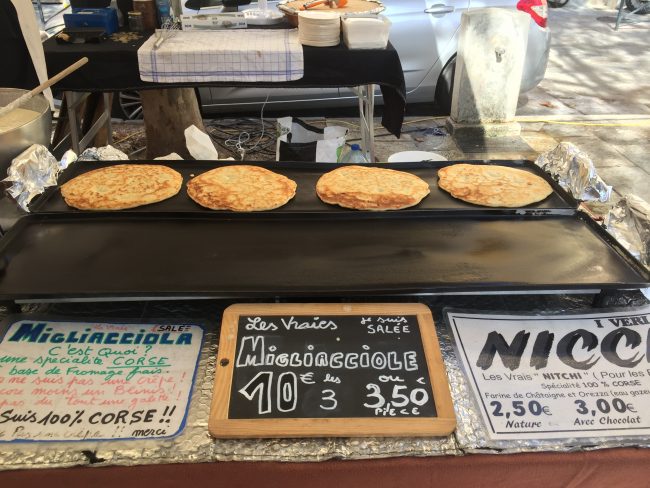 If you want to do more conventional shopping and update your wardrobe, you can also go on a shopping spree in the newer part of the city along Boulevard Paoli, where you will find both upscale, designer clothing, as well as middle-of-the-road fare. 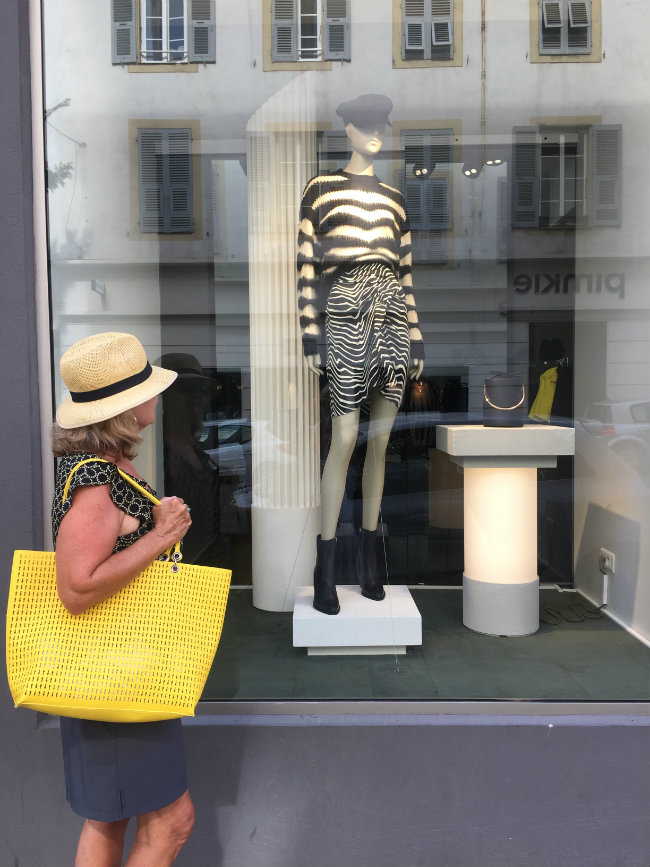 Yes, Corsica belongs to France, since 1769, when the French military conquered it, and Corsican citizens are French citizens. However, from the moment you step on the ferry, you can feel the Italian influence seeping in from all sides, from the Italian-speaking crew members on the boat greeting you with buon giorno instead of bonjour, to the locals you meet on the street, some of whom told me they only spoke Italian. And then there is the Corsican language and culture with some (so I’m told) of the locals considering themselves Corsicans first, and French citizens second. This would be quite understandable given their history and geography.

“You Have To Rent a Car”

People told me repeatedly before, during, and after I went to Corsica, that I had to rent a car so I could really see the island, to visit the best beaches further south, to see the countryside.

And I will do that on my next trip to Corsica. However, I think that a week in Bastia can be absolutely delightful, and a satisfying meal all in itself. 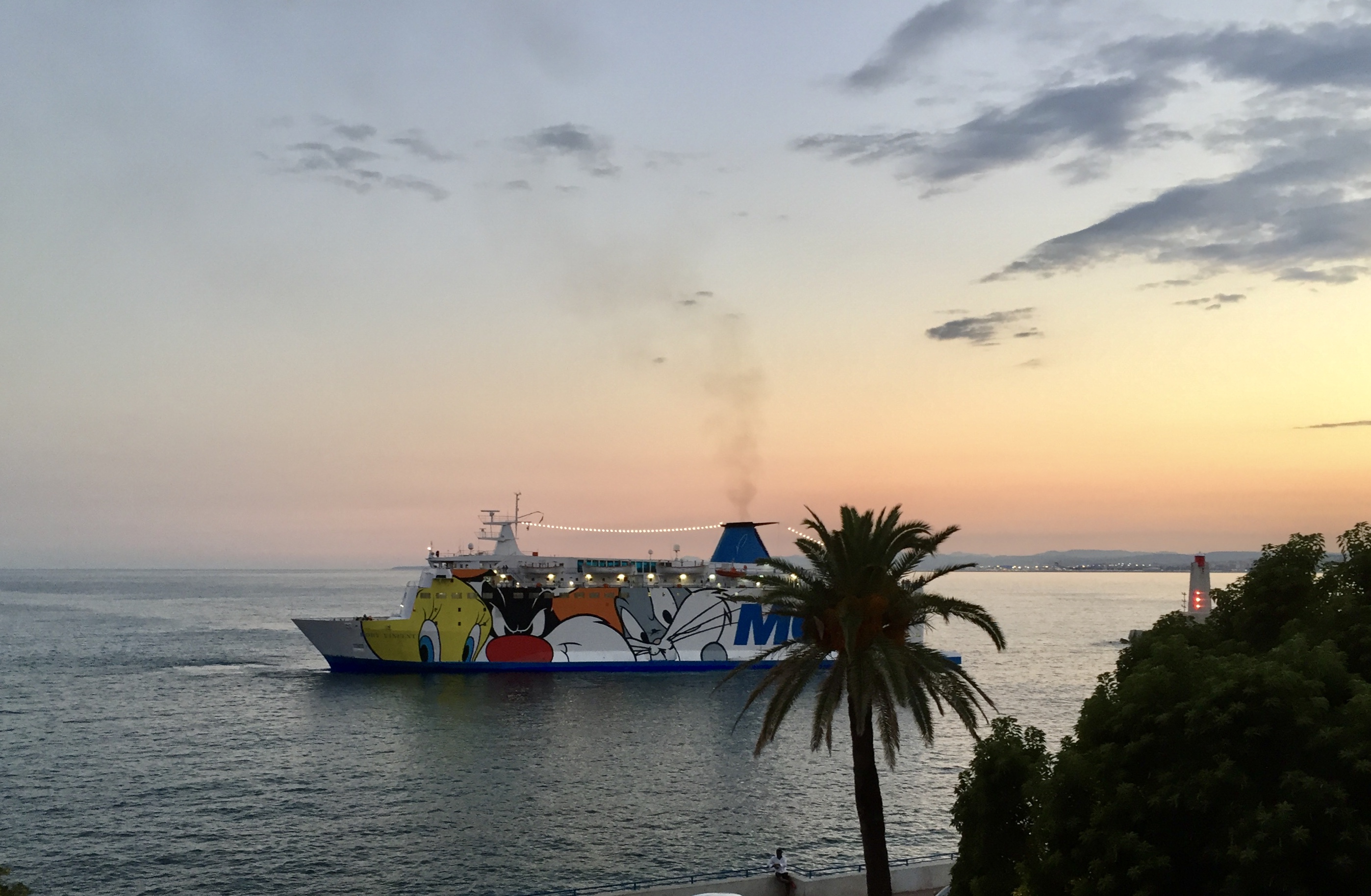 A Moby ferry heading into the Port of Nice. Photo: Mary Kay Seales