Exploring the Treasures of the Dordogne Valley 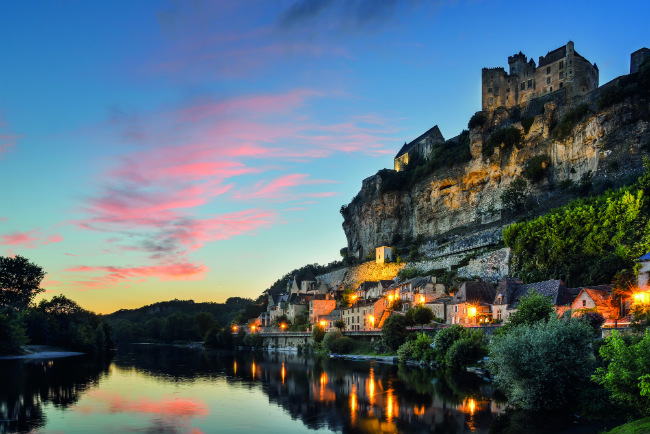 Guy Hibbert hops into a classic Citroën 2CV to follow the River Dordogne’s leisurely path as it flows through the ancient province of Périgord, and discovers many a treasure en route

Around every corner of this enchanting region lies another fascinating encounter, whether scenic or historic, cultural or gastronomic. And when I say ‘around every corner’, I mean it literally, because my latest voyage through the Dordogne valley sees me navigating the winding roads along its eponymous river. It’s just as well I’m piloting a 1970s Citroën 2CV – the epitome of French motoring nostalgia, and a reliable steed for languorous journeys in the country. 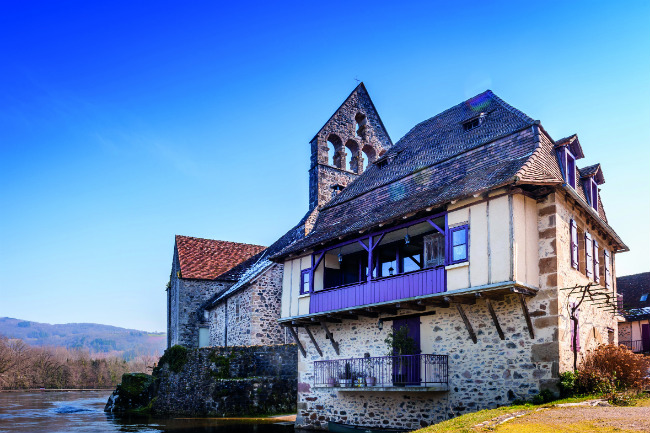 Although there is a département called Dordogne, (No. 24), that is only one part of the story of a river whose source is high up in the volcanic hills of the Auvergne and which weaves its way along the limestone canyons of Corrèze and the Lot, before meandering through the Dordogne Valley, where it enters the famous wine-growing estuary near Bordeaux. Starting upstream near the city of Brive-la-Gaillarde (handy to fly into from Paris or London), I have a few miles of rolling roads through the upland plateaux of the Causses, with their distinctive stone walls and stone shepherd huts, to get used to the sensation of driving the iconic 2CV. Hood down for maximum fresh air (no air con here), you get used to the roaring of the little engine, the surprisingly comfy ride and the yacht-like heeling over on bends, and soon enough there’s a big smile on your face as the signposts guide you towards what is one of France’s most visited historical sites, Rocamadour.

Amadour, a holy man or hermit thought to have known Mary, mother of Jesus, built a shrine here, dug out of the cliffs of Quercy limestone. Over the centuries since the reputed discovery of his remains in 1162, the site has become a world-renowned sacred pilgrimage stop (on the chemin de Saint-Jacques-de- Compostelle) and tourist destination associated with sanctity, miracles and powerful legends. In medieval times, hospitals were built to care for weary pilgrims (and no doubt tend to their aching joints after they had climbed the 216 steps of the great stone staircase to the church on their knees). 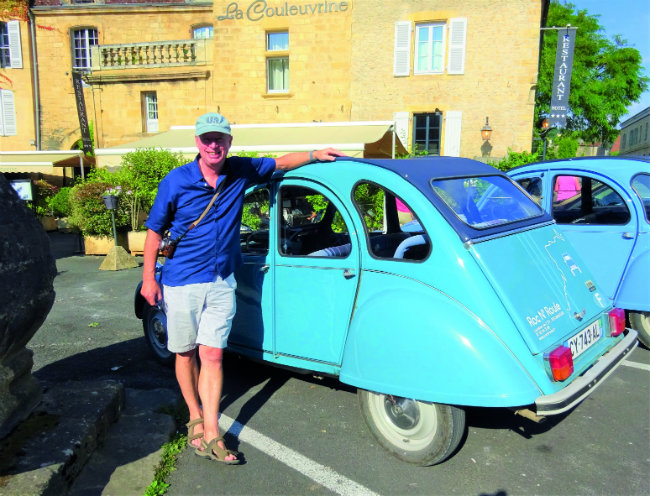 The author with the classic Citroën 2CV

Among the many wonders of Rocamadour is the Notre-Dame chapel, containing a statue of the black Madonna and an iron bell said to ring of its own volition when a miracle has occurred. In this atmospheric, intimate and sacred building, candles and votives cast shadows onto the dark stone walls, and model ships hang eerily from the ceiling as a symbol of the saint’s role in the protection of sailors at sea.

And if you’re fond of Arthurian-style legends then you’ll love the story of Durandal, the knight Roland’s sword, which is embedded in the rock above the Chapel of Miracles. As you walk from the pretty village at the foot of the cliff, you can choose to climb the steps and follow in the pilgrims’ footsteps, ascending through the seven chapels. Here the modern-day tourist is rewarded with wonderful views from the château ramparts. An elevator is provided for those with limited mobility. 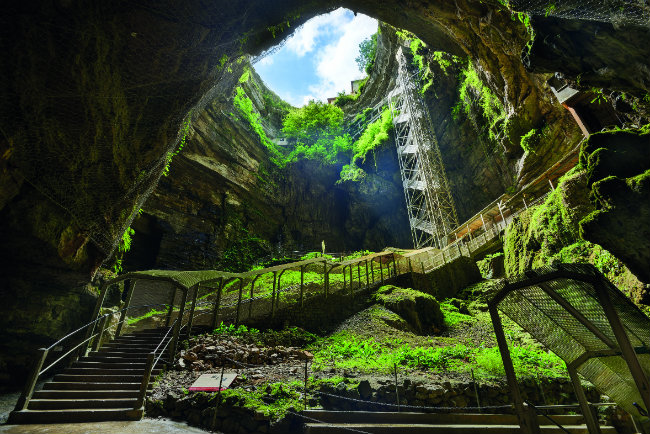 THE MOST BEAUTIFUL VILLAGES

Corrèze has no fewer than six of the plus beaux villages de France, of which Collonges-la-Rouge is arguably the most beautiful. Blessed on our visit with very fine weather, the buildings of Collonges with their dramatic red sandstone blocks and lauze stone roofs stand out in magnificent contrast against an intensely deep blue sky. Protected by the Amis de Collonges for nearly a century, the village’s narrow streets, artisan workshops and wonderful old houses dating from medieval and Renaissance times are in remarkable condition. It is massively popular, so go in the morning to beat the crowds or in the evening when the red stone glows in the dusky light. Of the charming eateries, Le Cantou has been serving excellent recipes under its vine-clad pergola for over a century. 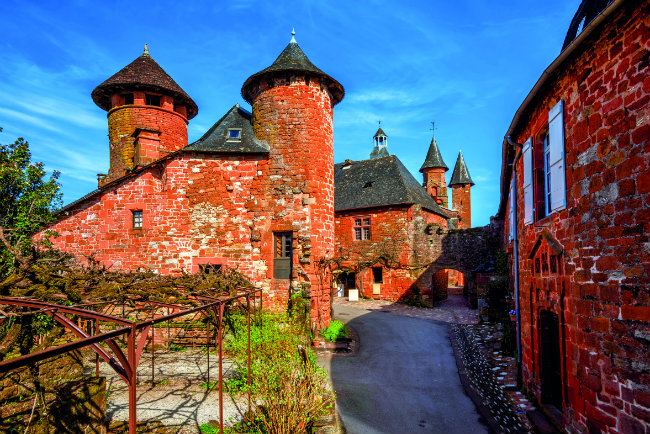 This area is also fortunate to count amongst its treasures many unrivalled caves and world-famous examples of cave art. I’ve visited quite a few of these now but nothing surpasses the Gouffre de Padirac, where visitors descend over 100 metres and are punted silently along a mysterious underground river before exploring an enormous subterranean world of ‘alien’ rock formations, gigantic stalactites, crystalline lakes and cathedral-style vaults. On certain dates you can explore it by lantern light – like the geologist explorer Monsieur Martel who discovered the cave. During the Fête de la Musique, on June 21, you may even be treated to a performance by a polyphonic choir singing madrigals deep in the heart of the cave, which has astonishing acoustics. 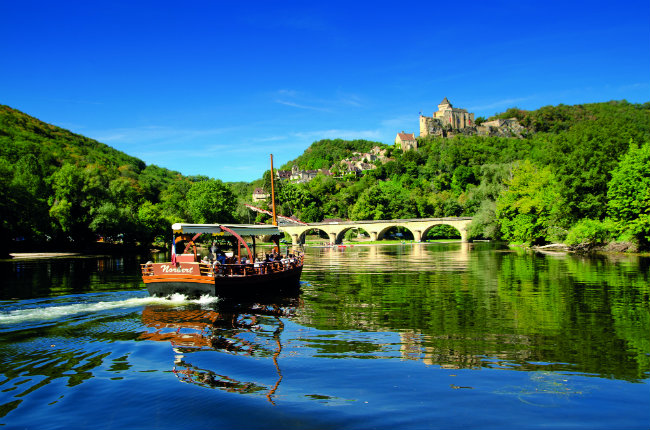 A tourist gabarre approaches the bridge and château of Castelnaud. Photo: Norbert Gabares

SAILING ON A GABARRE

Fancy moving gently downstream into the Lot and Dordogne? What better way than on the water itself? The traditional gabarres are flat-bottomed wooden boats that used to sail up and down the river taking wood to Bordeaux and returning with wine, salt and spices from the French colonies. But, with the advent of the railways and motorised trucks, their commercial use declined. Now they provide a way for tourists to see the cliffs and châteaux that overhang the river. Vessels can be boarded at Beaulieu-sur-Dordogne, Argentat, La Roque-Gageac, Beynac or Bergerac. 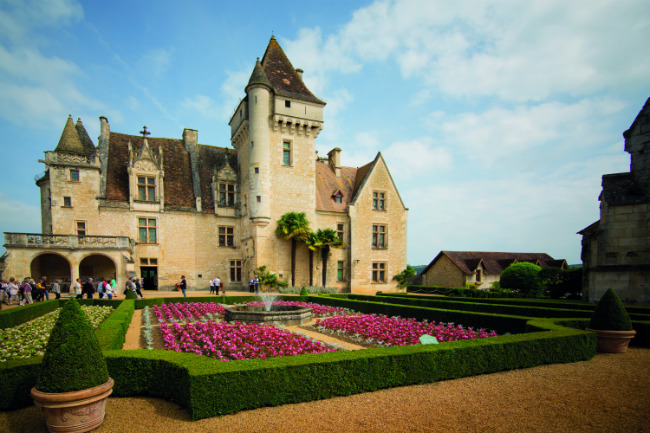 If you want to exert a little more energy you can rent a canoe or kayak from numerous locations along the river. You’ll be going downstream so there will be moments to lie back and take in the scenery as you glide by golden-stone villages or stop at a river beach to cool off with a swim (the Dordogne is exceptionally clean – clean enough for sturgeon; at Neuvic, they are even producing caviar) or for a spot of fishing. 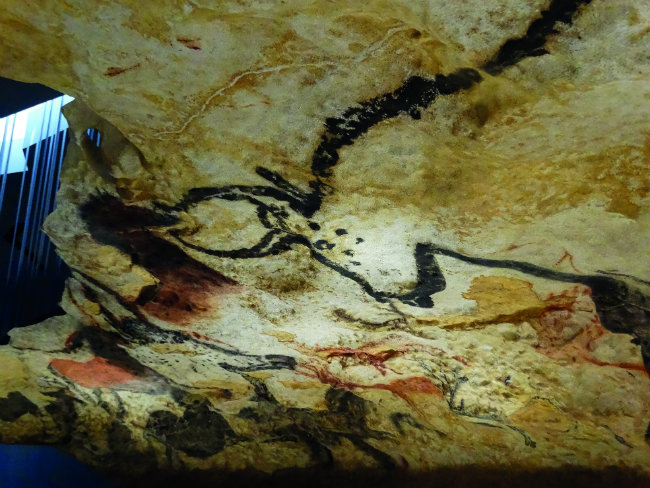 For a bird’s-eye view of the “valley of a thousand châteaux” you need to take to the air, by balloon or helicopter. A trip with Héliclub du Périgord or Montgolfiers du Périgord is a memorable way to reveal the grandeur of the landscape and to peek at some of the lovingly maintained private manoirs and châteaux hidden away in the forests.

Soaring over the Vézère valley with its dramatic cliffs and ancient cave dwellings aboard my own chopper, I am reminded why it is called the “valley of prehistory” – there are no fewer than 14 UNESCO World Heritage Sites to visit. The jewel in the crown is at Montignac, where the world-famous Lascaux cave paintings were discovered and where today you can visit the excellent new Lascaux 4 centre. There are hiking trails aplenty too. Or, if you had been on our recent France Today Travels Périgord Discovery Tour, you would have been one of very few lucky people permitted to see the original polychromic cave art in the spectacular Font-de-Gaume. 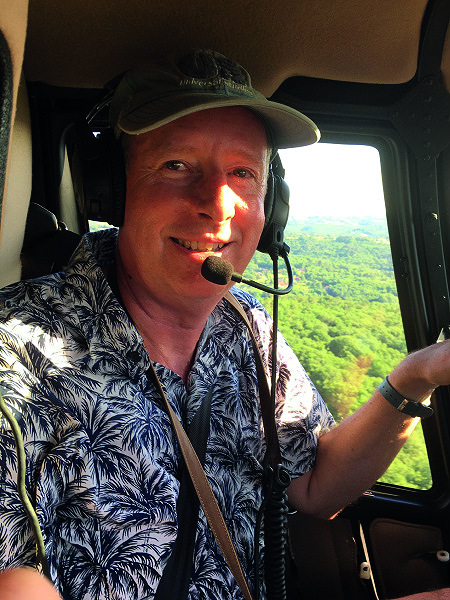 The helicopter swoops low around numerous impressive châteaux – the fortresses of Beynac and Castelnaud, the fairy-tale towers of Château des Milandes (Josephine Baker’s former residence), and then over two dramatic ridges high above the river; on one side, the plus beau village of Domme, an ancient bastide town lined with ochre houses and craft shops leading up to what is surely one of the most vertigo-inducing views over the valley.

On the north side, stretched out over hundreds of acres, lie the incomparable Jardins de Marqueyssac – a triumph of box topiary and Mediterranean planting with paths that lead through wild forest to clifftop lookouts over the valley. Below the gardens, right on the edge of the river, surmounted by a cliff face, sits the village of La Roque-Gageac – probably one of the most photographed places in France. 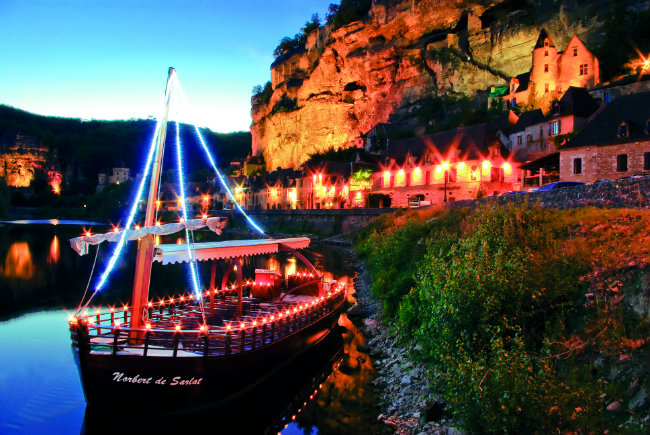 Try to visit in the evening for a meal overlooking the river, when the setting sun casts dreamy shadows across the ochre cliff and the deep green Dordogne where the gabarre boats are moored along the quayside. Before heading home, our helicopter takes in an aerial view of the medieval city of Sarlat where, from our position in the sky, it is easy to see the shape of the medieval heart of the old town. But you don’t need to take a chopper ride to get a rooftop view of Sarlat. Thanks to architect Jean Nouvel’s conversion of an old church tower into a glass elevator, you can now hop on up to the highest point in town. 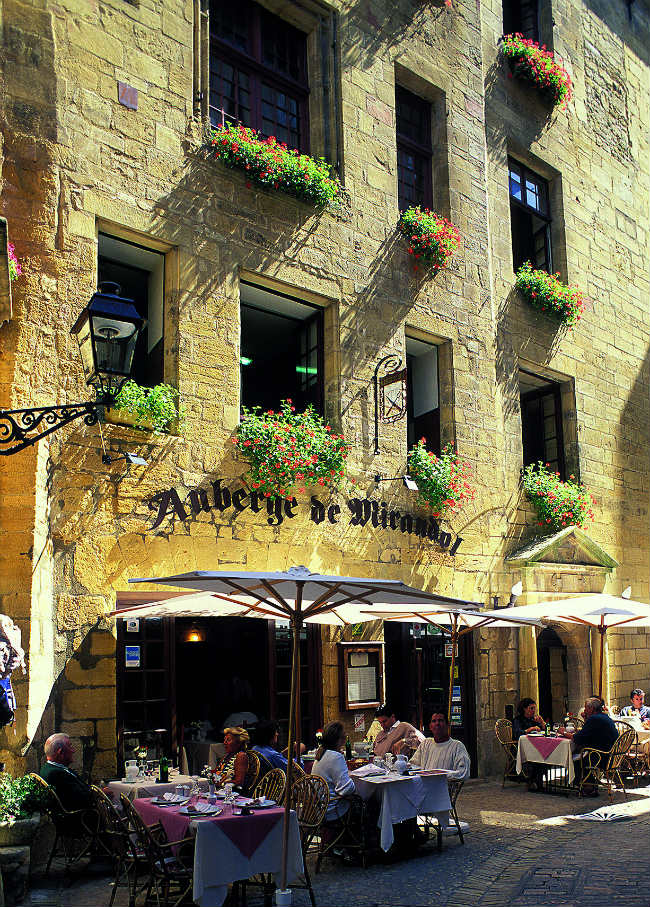 Sarlat is a must-see, of course. It’s an incomparable confection of golden-stone medieval and Renaissance buildings that requires a good couple of days to do it justice. Plan ahead and visit during one of the many cultural and gastronomic events: the truffle market in January, the goose fair in February, the journées du terroir (an extravaganza of local farm produce) in May, or one of the many theatrical and musical performances or art exhibitions. 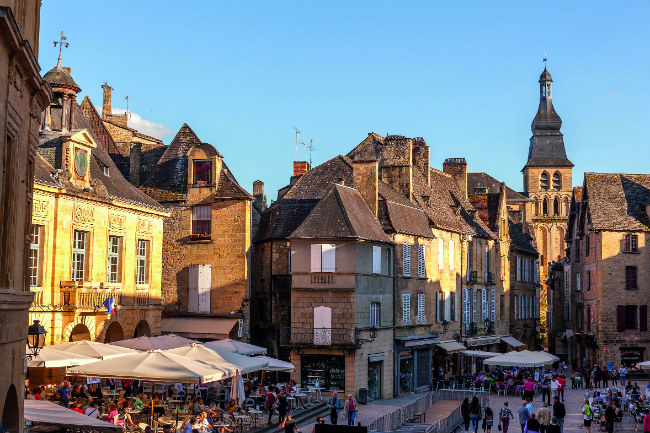 The medieval town of Sarlat-la-Canéda is a major draw for visitors. Photo credit: Fotolia

With more time I would have ventured downstream to the purple Périgord, home to wide fertile valleys, rolling vineyards and the under-appreciated wines of Bergerac. Or to the bastide towns of Villereal, Issigeac, Eymet and Beaumont-du-Périgord. Or north into the white Périgord, to visit Périgueux, Brantôme and Bourdeilles, famed for their limestone Romanesque churches and abbeys. But that will have to be saved for another trip. La prochaine fois… 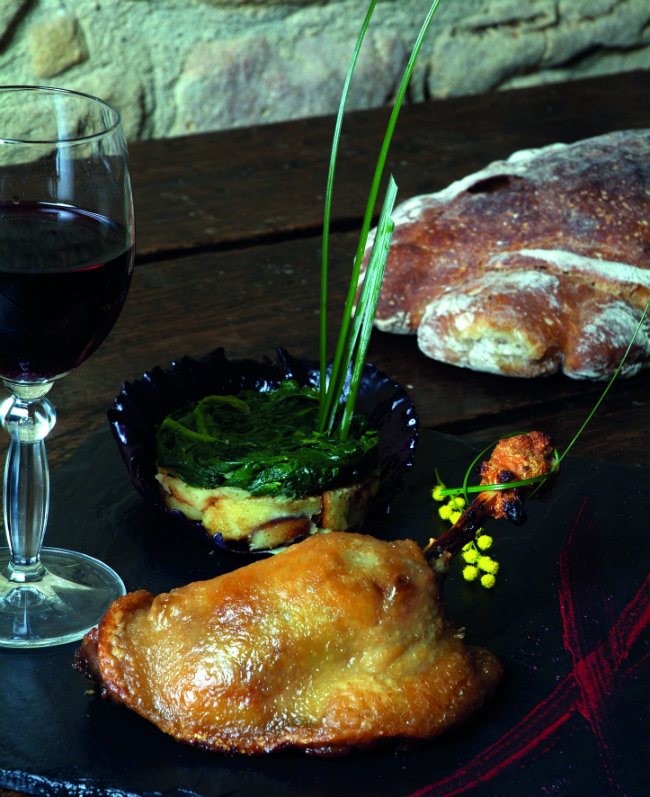 A TASTE OF THE REGION

Blessed with fertile soils, enough rain to irrigate and plenty of warm sun to ripen its produce, the Dordogne offers an extravagant palette of local produce to tempt you.

DORDOGNE STRAWBERRIES are hard to beat (buy them from any market and be sure to eat them the same day!). Sweet and fragrant, with many varieties to choose from, they’re perfect with a sprinkling of sugar.

WALNUTS are a Dordogne speciality, with Appellation d’Origine Contrôlée status. You’ll enjoy them on a classic Périgourdine salad – or even better, take back some walnut oil to dress your salads at home. 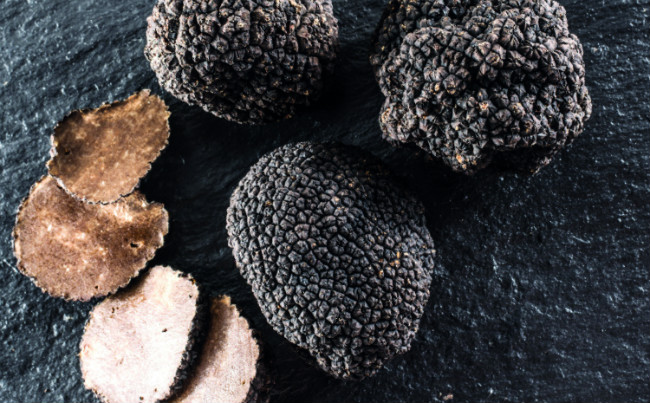 BLACK TRUFFLES are a local speciality prized for their delicate, aromatic, earthy flavour. They are harvested from December to February and sold at very high prices.

FOIE GRAS can divide opinion but there’s no getting away from its status in the Dordogne, where the duck and goose varieties are served in nearly all restaurants as an appetiser or main course.

DUCK features in many shapes and forms within Périgourdine cuisine, served as rillettes on toast as a starter, or cooked as magrets (grilled breast with a sauce) or confits (preserved in fat and served crispy). 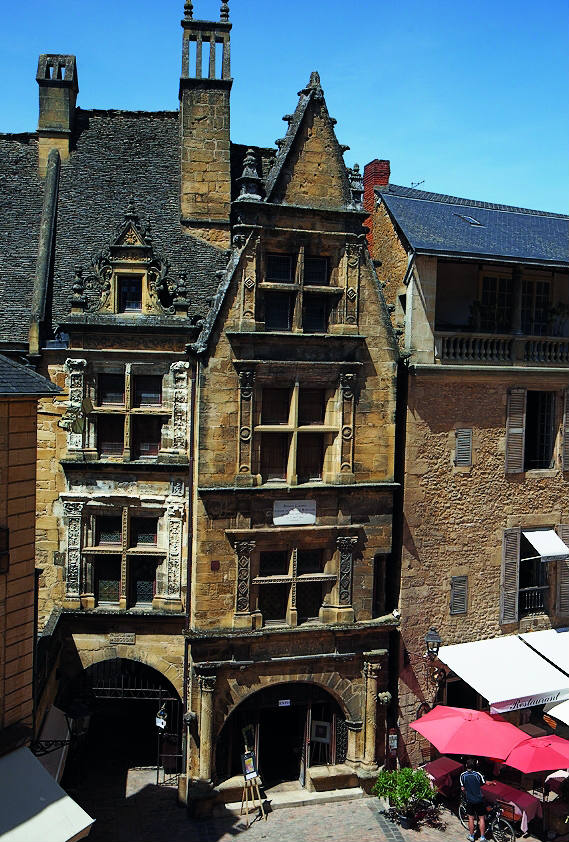 Previous Article A Monumental Year for Paris: Most Popular Attractions
Next Article Corsica Chronicles: A Week in Bastia