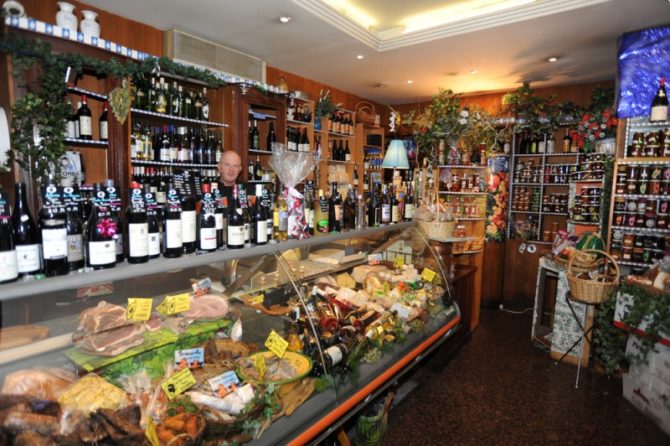 Corsica is a little piece of paradise that strayed to sea. Known as the Ile de Beauté, it not only has an ideal climate, a wildly beautiful landscape and inhabitants known for their rough but warm character, but it has also developed a highly distinctive and diversified cuisine. The wide variety of local specialties includes charcuterie from the indigenous race of Corsican pigs, chestnuts from the forests that blanket the inland mountains, sheep and goat cheeses, honey, olives, wine, beer, liqueurs and pure spring water, along with abundant fruits and aromatic herbs that grow wild in the scrubland maquis. There’s not only fish, spiny lobster and other seafood from the island’s Mediterranean coasts, but also trout from its mountain streams. It’s almost impossible to list everything that grows and all that man has reaped from this island blessed by the gods—but let’s try, anyway.

Besides the traditional sheep and goat cheeses, the famous brocciu, currently the only Corsican cheese with an AOC designation, is a cheese made from cheese. What this means is that whey, the liquid that remains after the curds are removed for the fabrication of other cheeses, forms the basis of brocciu. More milk is added (raw whole milk from the same herd—mainly sheep’s milk, although it may include some from goats); the mixture is then salted, heated, molded and drained. The result is a creamy, tangy cheese similar to Italian ricotta. It’s usually eaten while fresh, either salted or sugared. It’s also a basic ingredient in many dishes, notably a traditional mint omelet and the famous fiadone, a lemon-flavored cake. Brocciu is sometimes aged and dried for a minimum of three weeks before being sent to market. It’s a seasonal product, only available from November to June—in summer, tourists must content themselves with brousse, a simple curd cheese, which some less-than-honest vendors pass off as brocciu.

Corsican charcuterie is also a victim of its own success. It should be made from the meat of black Corsican pigs—animals belonging to the indigenous species called Nustrale, born and raised on the island—but that is not always the case, so the buyer must beware. It’s worth finding the real thing, because the taste of Corsican pork is unique. About 20,000 Corsican pigs are produced each year, and all are raised in a free-range environment. They feed on acorns, chestnuts and wild berries, both in the forest and in high mountain pastures between 3,000 and 6,000 feet in altitude. They also graze on herbs and the roots of ferns, which they love. This diet gives the meat a delicious nutty taste. This slow-growing animal is now being intensely studied, because it’s a candidate for an AOC designation, which is very close to being granted. The meat is particularly high in monounsaturated fatty acids, which help to reduce cholesterol levels. The choicest cut is the ham, locally called prisuttu.

The pigs are slaughtered at about six months old, when they weigh about 250 lbs. The ham is the first piece taken. Trimmed, buried in salt for about three weeks, it is then rinsed in cold water, and set to age for a year in a dark cave with a constant level of natural humidity. When the ham emerges from the cellar, it is brushed and covered with ground pepper. The total aging time ranges from 18 to 24 months depending on the size of the ham. Other products obtained from Corsican pigs are lonzu, salamu, salsiccia, coppa, panzetta and a seasonal liver sausage called figatellu. Two charcutiers in the island are particularly famous for their splendid charcuterie and extraordinary hams: Pascal Flori is based in Murato, in the northern hills not far from Bastia; and Paul Marcaggi, whose farm is in Bocognano, in the central mountains, sells his A Bucugnanesa brand products in his family’s boutique U Stazzu in Ajaccio.

While the Nustrale pig is awaiting its appellation contrôlée, Corsica’s olive oil, honey and chestnut flour have already been granted their AOC status. The AOC designation has given fresh impetus to the olive oil industry; new trees have been planted and some olive groves that had been abandoned are being rejuvenated. A tree that has returned to the wild no longer gives fruit, and those that are not pruned grow profuse amounts of foliage and produce fewer and fewer olives. Corsican olive oil is relatively aromatic, with aromas of artichoke and cut grass in the stronger ones, apple and honey for the milder oils; both are perfumed by the wild herbs of the maquis.

The island’s honey also picks up the dominant aromas of the maquis: marjoram, myrtle, immortelle, oregano, mint, rosemary and others. Fragrant Corsican honeys include chestnut, which has a strong flavor and dark color; honey from hives located near almond or fig trees; and those near citrus orchards of clementine, lemon and citron trees. (The citron, a semitropical fruit, is eaten in preserves or as candied peel.)

Finally, the chestnuts that give the pigs their inimitable flavor are also used for flour—dried and shelled and often roasted in a wood-burning oven before being ground, a process that accentuates the grilled aroma already naturally present in the nuts. One island brewery makes Pietra, a beer brewed with malt and chestnut flour. At the same time robust, delicate and slightly bitter, Pietra is served very cold. As for water, three springs, Saint Georges and Zilia with still water and Orezza, with naturally sparkling water, are the crystalline counterparts of the island’s nine AOC wines.

Vines have been cultivated forever in Corsica, and it is impossible to speak about Corsican wines in a global way. The island’s winegrowing culture is like its inhabitants, diversified and plural, independent and interdependent. In spite of that, though, the Corsican wine industry came very close to losing its soul. Traditionally, peasants cultivated a wide variety of crops until the arrival of expatriate Corsicans returning from Algeria in the early 1960s. With the blessing of the French government, some of the returnees planted more than 60,000 acres of vines and started mass-producing wine as they had done in North Africa. Local cépages, or varietals, were abandoned, and high yield was favored over high quality.

But let’s fast-forward over the mistakes that were made and the revolts they engendered. Today the principal indigenous cépages have been replanted, the Ile de Beauté is once again producing quality wines, and each of the nine appellations has reclaimed its own specific character. While the wineries closest to the coast produce iodized wines, Corsica has many microclimates and very different terroirs—the dramatic relief of this rocky island contributes quite a lot to the diversity among its wines.

This back-to-the-future movement did not come about by chance, and the progress was more or less difficult depending on how far each vineyard had gone on the mistaken march toward “modernity”. Some growers had ignored the siren song of mass production, continuing to plant a variety of crops and using almost no chemicals, which they found too expensive. Others envy them now for their soil unspoiled by fertilizers, pesticides and herbicides. These growers have converted their land solely to vineyards in gradual steps, and are producing quality wine. The others have now seen the light, and taken advantage of subsidies offered to those who uprooted low-quality imported vines and restructured their vineyards.

Everyone has finally realized that one reason Corsican wine has been famous since the days of antiquity is because those indigenous grape varieties were treasures. There are three main cépages in Corsica: Vermentinu produces high-quality white wines, high in alcohol, pale yellow in color, lively and dry in taste, with aromas of chamomile and apple. Sciacarellu, the principal variety used in the Ajaccio region, yields reds that are fairly light in color, with finesse, delicate tannins and peppery aromas. Nielluciu, which reigns in the Patrimonio appellation, produces a deep red wine, tannic and well balanced, with aromas of ripe stone fruits and violets. Another grape worth mentioning is the muscat à petits grains, a variety used for the excellent sweet wine, Muscat du Cap Corse.

The island’s most prestigious appellation is the AOC Patrimonio. It’s also the oldest, with AOC status since 1969. Here, the cliché image of wild and untamed Corsica proves false, as you ride through the rich Conca d’Oro (Golden Conch), the very pretty nickname given to this section of land because of its agricultural prosperity. Harmony reigns here, where for centuries man has cultivated grapes with talent and love. The region is called Nebbio, fog in Corsican, named after the frequent fogs caused by the evaporation from the Golfe de Saint-Florent. It forms a large cirque at the foot of Cap Corse, facing west and protected from sea winds by a small, craggy mountain range. It’s absolutely enchanting to meander along the small winding roads and, at a bend here and there, come upon a glimpse of the sea.

Most of the Patrimonio wineries are tucked into this mild climate zone, and almost all are small family enterprises. Although it comprises just over 1,000 acres, the tiny AOC area is divided into two distinct zones. In the southwestern part of the appellation, in a sector of granitic soil, two isolated domaines somehow manage to cultivate their vines in the wild, almost hostile Désert des Agriates, in the middle of the maquis. The winemakers, about thirty in number, are proud of their work and well they should be, since they live surrounded by a superb landscape and they all produce wines of character. Many of them are respectful of the environment and have passed that trait down to their children and to the young people who have moved into the area and are following in their footsteps.

It has not been an easy task, getting others to admit that Corsica has great indigenous wine varieties—all the island’s winemakers have had to struggle against scorn and incomprehension from mainland France and the wine world at large. So if you are lucky enough to get to Corsica, take some time to visit these men and women who have worked so hard to improve the quality of their wines and to gain recognition for them. It’s another way of getting to know Corsica, and if you sometimes find them a bit gruff, just remind yourself that it’s their way of protecting themselves and their heavenly little cornucopia in the middle of the Middle Sea.

In Paris, all the best Corsican products can be found at:

Originally published in the March 2010 issue of France Today