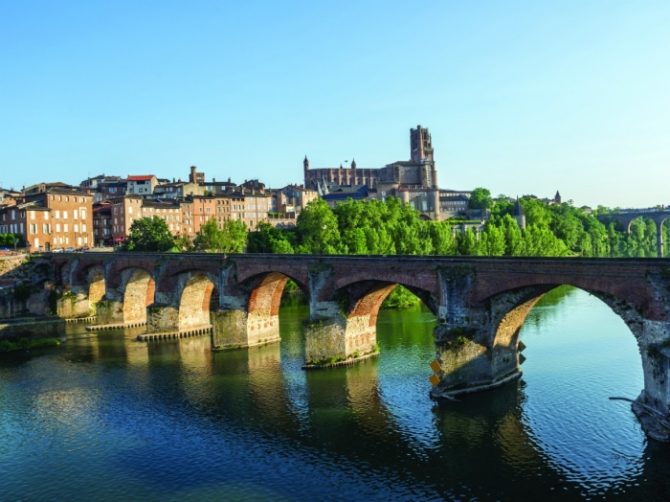 Serving as the departmental prefecture of the Tarn in the Midi-Pyrénées, Albi is a pale pink gem of a country town that ticks all the required aesthetic and gastronomic boxes for a provincial French city break. From its skyline-dominating, ocean liner-sized and brick-built Cathédrale Sainte-Cécile to the omnipresence of delicious duck dishes on local menus, Albi boasts historic intrigue and gourmet delights galore.

In addition to the local cuisine and wine – nearby Gaillac produces reds and whites of an increasingly high standard – there’s one serious reason for art lovers to visit, namely the refurbished Palais de la Berbie. Sited next to the similarly-hued cathedral, this brick-built marvel is set over two floors and houses an extensive collection of the works of the town’s most famous son, Henri de Toulouse-Lautrec.

The party-loving depicter of the Parisian underbelly lived and perished, aged just 37, in a haze of insalubriousness and absinthe. For such a small man, he possessed a big appetite and considerable local connections, the latter due to the aristocratic status of his wealthy family, who had influence across the Tarn.

If you’re in Albi or in nearby Toulouse for a few days and keen to delve deeper into his back story, you can head out into Tarn’s paysage, to visit the Château du Bosc. Henri Marie Raymond de Toulouse-Lautrec-Monfa (1864-1901) spent his formative years there and was keen on hunting and painting horses. You can visit his childhood room, which is full of toys and sketches, and has been assiduously kept in its original condition by the guardian of the family’s heritage, the charming Nicole Tapié de Celeyran, the granddaughter of the artist’s cousin, Raoul. The pencil marks on the wall where the family members measured their respective heights are particularly poignant.

Portrait of an Artist

However, it’s in Albi itself, in the shadow of the great cathedral, that Toulouse-Lautrec’s art comes more sharply into focus. The Palais de la Berbie is the former bishop’s palace, which became the Musée Toulouse-Lautrec in 1922 and, after major renovation, reopened in 2010 – the same year as Sainte-Cécile gained prestigious UNESCO World Heritage status.

Over 1,000 of Lautrec’s works are on display there, including early pieces, his celebrated posters and those detailing the more sordid side of Parisian life in the late 19th century – it’s a must-see and a fitting tribute to Albi’s most famous son. Also keep an eye out for the well-preserved, 13th-century floor in glazed terracotta tiles which was discovered during the renovation.

Given his appetite for alcohol, it’s a marvel that Toulouse-Lautrec ever managed to create the iconic works which adorn the museum’s exposed brick walls. However, his penchant for Cognac and absinthe (often in the same glass) can be forgiven, in light of the misfortune which blighted him from an early age. Two accidents and bone disease stunted the artist’s physical growth and left him unable to engage in many of the activities befitting an aristocrat, but he could draw very well. After taking the Baccalaureate, Henri went to Paris to study painting, befriending Fernand Cormon and Van Gogh before the bright lights and ladies of Montmartre lured him into an altogether more lively milieu than that of the Tarn. Toulouse-Lautrec was considered a ‘free artist’, because he didn’t need to paint to live or require a benefactor, so it’s very interesting to see some of the commercial posters he produced for the likes of Simpsons, a bicycle chain supplier on the Boulevard Haussman.

When visiting the museum, allow yourself a good two-three hours to immerse yourself in Toulouse-Lautrec’s colourful, characterful depictions of bohemian life and penchant for Japanese art. Upon emerging, you could either join an excellent tour organised by the Office de Tourisme next door or allow yourself the flâneur’s privilege of wandering, mapless and wide-eyed, around the narrow streets of the vieille ville, ducking into ancient courtyards and cloisters, or browsing restaurant menus.

If it’s lunchtime, you can head to Le Lautrec, next to the artist’s birthplace, for a classic salade Albigeoise (cooked radish with liver – more appetising than it sounds) followed by a cassoulet de morue (saffron, beans, salt cod and mussels). Alternatively, you can take a picnic into the tranquil gardens of the Collégiale St-Salvi, which was built over 900 years ago and combines Romanesque and Gothic elements. The Saint-Salvi area was Albi’s commercial hub in medieval times – keep an eye out for the Occitan versions of its street names, which include the likes of Payrolaria (Coppersmiths’ Street) and Sabataria (Cobblers’ Street).

Albi’s Golden Age was 1450-1550, when pastel, the blue colouring obtained from yellow flowers in the Pays de Cocagne, was used in prestigious artworks and made the city wealthy. These days, it’s the lovely boutiques, cosy cafés, bustling terrasses and a marvellous restored indoor market – purveying everything from plump pink garlic to confit de canard – which fill the local coffers.

Don’t miss Le Vieil Alby, sited where the Rue Croix-Blanche and Puech Bérenguier meet. It’s one of the town’s oldest brick and timber-framed buildings, and a typical former Albigensian dwelling. Inside you can see the restored open attic used for drying laundry or storing goods plus a small exhibition about the city and its Toulouse-Lautrec connections.

Leaving the best until last, you can then head back to the cathedral and stand in wonder beneath its epic grandeur, which is capped by a 78-metre bell tower. This Gothic masterpiece, one of France’s most eye-popping edifices, took 200 years to build and was consecrated in 1481. It boasts stunning vault frescos and a huge, spine-tingling mural, The Last Judgement, painted by Flemish artists between 1474 and 1484, during an age when ‘fear was faith’s mother’. It’s easy to see how many churchgoers would have paid close, tremulous attention to this mural’s many visual warnings of the fate of those who would commit sin. Built as a Catholic statement of authority, in the wake of the holy war to defeat the heretical Cathars which took place in 1209-1229, today the cathedral stands as an infinitely more welcoming icon of this splendid south-western city.

TGV: Paris Montparnasse to Toulouse then on to Albi

Previous Article Reviewed: Les Poulettes Batignolles in Paris
Next Article A Quest for Peace amongst the Prunes