Évian-les-Bains: A Town in a Bottle 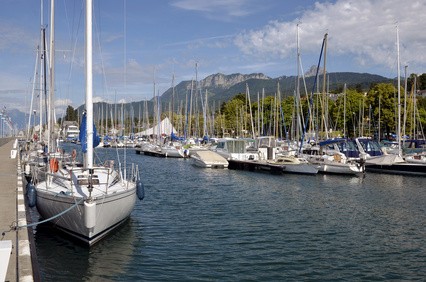 Évian-les-Bains may be famous for its mineral water, but it’s also a destination in its own right, a town revelling in its Belle Époque glory that continues to attract those with refined taste. The namesake mineral water is the best-selling bottled variety in the world. But not so many people know that Évian is also a rather glamorous town.

For a start, Évian town occupies a sensational spot beside Lac Léman, or Lake Geneva, as it’s called much more commonly in English. Its prime lakeside location helped make it so popular with high society during the Belle Époque. It still draws a wealthy, cosmopolitan crowd. Visiting Évian, your gaze will be drawn time and again to the gorgeous views across the immense waters to Switzerland. Here, you find yourself beside the largest lake in Western Europe.

Most of Lac Léman’s southern shore is French, forming the northern boundary of mountainous Savoie. The simplest way to appreciate Léman’s beauty from Évian is to take the appreciably flat, lakeside promenade. You’re accompanied along the way by immaculately dressed flowerbeds. I stopped for lunch recently at a lake-side restaurant, Au Cabestan, for a sunny meal and the entertainment of grebes bobbing and diving between the boats. I was eating lake a fish myself. The chatty restaurateur explained how he much prefers Lac Léman to the Côte d’Azur, and praised Évian’s peace, also claiming the town to have the lowest unemployment rate in France, ‘thanks to big firm across the water’, as he referred to Switzerland.

I’d thoroughly encourage you to get out on the lake for a cruise. The Swiss CNG company has the monopoly on boat trips across this inland sea, taken by many commuters as well as tourists. The rich get out in their yachts – Évian and neighbouring Thonon boasting big swanky marinas. You may also see La Savoie in action certain days, a former working sailing boat provided with huge sails to catch Léman’s capricious winds. For a shorter, easier lake trip, board the little solar boat (the first of its kind in France) that carries you along Léman’s edge to the Jardins de l’Eau du Pré Curieux. On the lovely, silent journey, you see the town unfold, while the glorious triangular peaks of the Chablais, Savoie’s most northerly mountains, emerge behind. You’re first accompanied inside the gracious pink villa, now converted into an ecological centre, explaining the importance of wetland habitats across the world and of Lac Léman in particular.

This great lake was treated for far too long like a giant dustbin, alarming numbers of disused cars and fridges even ending up drowned in its waters. Fortunately, it has undergone a major clean-up in recent years. Nowadays, you can easily enjoy swimming around Évian. I took a dip on my last visit. Being a person who likes their bathing water as warm as their bath, I was delighted by the temperature, although the odd cold current can surprise you. Back with the Pré Curieux, leaving the house, a guide takes you around the grounds, where the different wetland habitats created here in miniature – including enchanting lily pond and flower meadow – are well presented. Our guide also explained how huge quantities of water filtering down from the Chablais are captured naturally under the plain on the south side of Léman – hence the immense amount of Évian mineral water available.

In the centre of town, people often queue to fill up on free mineral water at the Cachat spring, where the success of the local spring water really took off, at the time of the French Revolution, when a certain marquis claimed the waters had relieved the pain of his kidney stones. An older tale refers to a lord whose beautiful daughter was courted by many noble suitors, although she and the stable-keeper had fallen in love. When the lord fell ill, he promised his daughter’s hand to the person who could cure him. The stable-keeper consulted a wise hermit, who revealed the secret of Évian’s magical eau, and so the lovers were allowed to marry.

The bottling of the water on a major scale began in 1826, and the public baths were opened in 1827. The clever people who set up Société des Eaux d’Évian in 1869 knew how to make Évian doubly popular, finding not just new springs to exploit, but also building refreshment pavilions, hotels, a theatre, and the casino. Évian was put firmly on Europe’s map for well-being breaks. The Cachat spring has been dressed up quite elegantly, a statue of a naked lady thrown in gratuitously. Just below, the splendid Art Deco dome of the Buvette Thermale signals the most central home of the Évian water company. Inside are displays on its origins, designer bottles, and a boutique selling branded gifts. You also sign up here for a tour of the massive water-bottling factory located outside town, at Amphion.

Back in the centre, Évian has undergone a much-needed make-over. Nowhere are the transformations more evident than in the line of grandiose buildings just behind the promenade. The massive Palais Lumière, too long neglected, has had its splendid glass crown restored to its former glory; the sparkling palace hosts major art exhibitions, as well as conferences.  If visitors in Victorian times loved combining health treatments with a fashionable break, so can you today. The Hilton Hotel behind the promenade may not sound like everyone’s cup of tea, but this is no ordinary chain hotel. It’s a wonderful hideaway, with interesting contemporary architecture, and it contains a luxury Buddha Bar Spa, among the largest of such pampering centres in Europe, an outpost of the popular Buddha Bar brand that got its start in Paris. Also behind the promenade, in more discreet contemporary glass architecture, lies the entirely renovated Évian’s Thermes, or thermal spa. It’s on a friendly, manageable scale, a gentle place for a brief, relaxing visit.

Pulling in far more crowds behind the promenade stands the very popular casino. It’s a brash place, built in the style of a Greek church. Beside the real church nearby, a plaque recalls how a number of Jews were hidden from the Nazis in the presbytery during the Second World War.

In the history books, Évian is best known for the accords forged at high-level state meetings here. The 1962 Évian Accord saw the French government officially recognise Algerian independence after the appallingly bitter war there. The town still hosts major political gatherings; the G8 held here in 2003 drew many protesters, although most were forced to stay in Swiss territory. Évian town hall received a very minor external wound; it’s well worth popping in to look inside – the extravagant Belle Époque interiors were ordered by the Lumière family on the proceeds of their film wealth. Upliftingly, as part of Évian’s recent revamp, the cable car up the very steep slope behind the centre has been reopened for the first time in decades, and it’s free. Enjoy the gentle ride to the Auditorium – a striking, wood-clad cultural centre designed by Patrick Bouchain in the 1990s in honour of the late maestro cellist Rostropovich. Look out for the cultural programme here and elsewhere – Évian puts on many major events, both musical and sporting, golf being a great speciality. You could also use the cable-car to visit one of the extremely smart slope-side hotels, great places simply to take tea, with fabulous views on Lac Léman. I headed up to the Ermitage, with its gorgeous grounds, beautiful pool and bucolic lake views. You don’t have to be mega rich to enjoy many of Évian’s delights though. Return to the lakeside for a free dip. Or try your hand at one of the many lake sports on offer. What is sure is that Évian can offer a host of watery attractions for all tastes.

The rapid TGV trains go as far as Évian direct from Paris during weekends in peak holiday seasons, otherwise the final leg slows somewhat beyond Bellegarde to the west. By air the nearest major international airport is Geneva, 50km away at the western end of Lac Léman, served by a large number of airlines.

The Hilton (Quai Paul Léger; +33 4 50 84 60 00) , with all sorts of stylish facilities including the major Buddha Spa, a fine restaurant, Cannelle, and a brasserie.

Royal Palace and Ermitage (+33 4 50 26 85 00; www.evianroyalresort.com) are ultra-glamorous sister hotels competing for the attention of the wealthy. They both lie close to each other up the slope from the lake, in locations with sensational views, and offer all sorts of pampering and sporting facilities as well as superb dining. Prices vary a great deal according to season.

Hôtel des Cygnes (8 Ave Grande Rive; +33 4 50 75 01 01; www.hotellescygnes.com) is a more affordable place to stay but one which can boast the exclusivity of being the only Évian hotel right on the waterfront. It lies east beyond the marina and has a nice traditional waterside restaurant. Note that restaurant is reservation only.

For more on the surrounding region, consult www.savoie-mont-blanc.com.