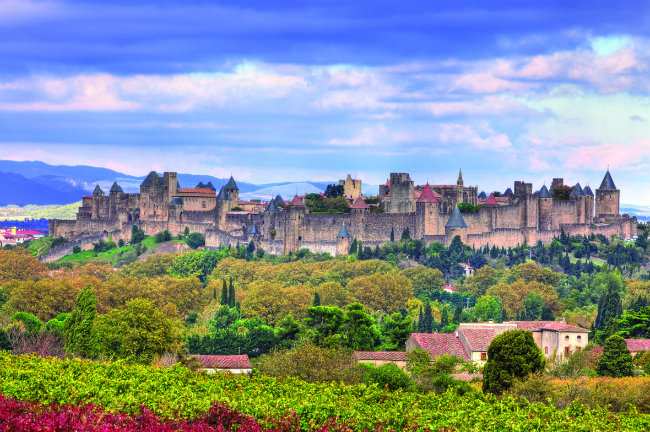 The area of Languedoc-Roussillon maintains its proud tradition of resistance against northern authority. No other region, except Brittany, was as quick to resist central (Parisian) governmental directives. In the Middle Ages it was, along with Midi-Pyrénées, the heartland of the Cathar sect, which rebelled against the Pope in the name of purity and tolerance. And so the ‘heretic’ Languedoc had to be broken by the destruction of its cities and the slaughter and rape of its citizens: the entire population of Béziers was massacred in 1209 to the cry of ‘Tuez-les tous, Dieu reconnaîtra les siens!’ (‘Kill them all, God will recognise His own!’).

Brought to its knees by the Catholic Church and soldiers from the north, it was forced to become a part of France in 1229. By the 17th century, however, the Cathars’ descendants had become Huguenots, Protestants, and their fighting spirit endured against the atrocities of the armies of the ‘Sun King’, Louis XIV – the feared Dragonnades. Not surprisingly, that spirit reignited against the German occupation during the Second World War with les résistants. Little Roussillon, wrenched from Spain in 1659, has shown the same indomitable spirit to keep its identity and Catalan language. 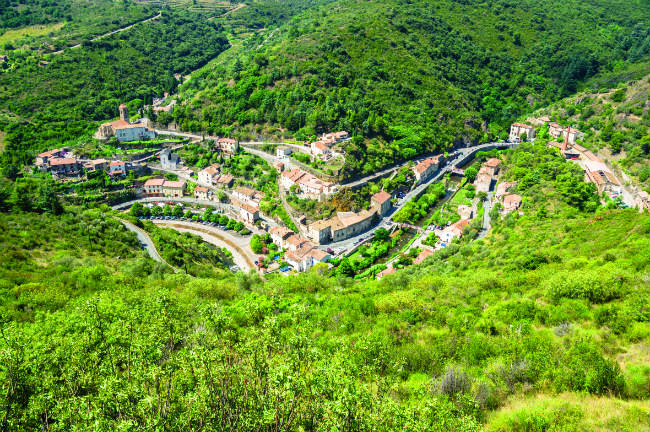 The commune of Lastours is famous for its hilltop castles. Photo: Fotolia

The Cathars continue to inspire esoteric books, witchcraft, tourist lore and intellectual debates today (see www.chemins-cathares.eu). They thought the world was evil even though God was good, which meant that the Church (Catholic or otherwise) was evil too. Their aim, therefore, was to sever ties with the animate world, and their souls could then be purified by God through successive reincarnations. The only stage of atonement for their sins was to become a Cathar after receiving the Consolamentum, their only sacrament, from Parfaits – the Cathar bons hommes and bonnes femmes – wise men and women learned in the faith.

In 1907, the winegrowers’ revolt, triggered by a major slump in wine sales and the unfair competition of ‘unnatural’ wines, engulfed the whole Midi Rouge (or ‘Red South’), encouraging Socialist and even Communist ideas somewhat out of character among these predominantly conservative rural people. The government had to pass a law against fraud on food and drink, while the Languedocian winegrowers, who shed their blood against the military, were the first in France to create co-operatives to protect their livelihood. 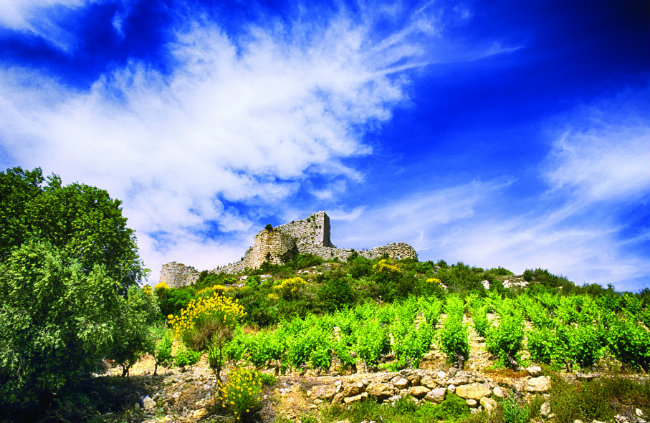 Resound again, deep caves / With the echo of their hymns of yesteryear / And you, torrents which, in your waters / Would carry away the sound of their voices / Some, hunted from summit to summit / Like true lions knew how to fight / Others and those were heroes / Knew how to die without resisting. 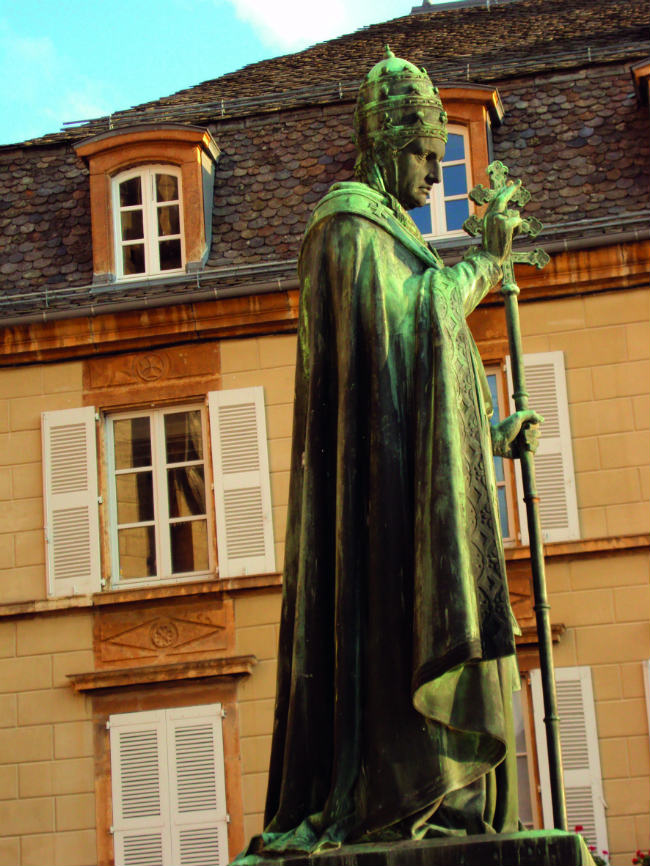 Guillaume de Grimoard, known as Pope Urban V, was a native of the Languedoc.

In the northern part of the region lies the ‘French desert’, the least populated department in France, where finding a doctor is getting more and more difficult these days. Lozère owes its name to its tallest mountain, Mont Lozère (1,699m). It is the only department in Languedoc-Roussillon that is landlocked. The country is remote, wild and unforgiving, with dark woods, arid moors and sharp mountain peaks. It was a place of legendary fear in the 18th century, threatened by a monstrous, wolf-like and endlessly mysterious Bête du Gévaudan.

Few people ventured there up to the First World War, but its unspoilt nature and sparse population attracted French hippies, and later in the 1970s the first scientists began to study its ecology. It is now sought by hikers and naturalists for its breathtaking scenery: the gorges of the River Tarn, Le Parc National des Cévennes [a UNESCO Biosphere Reserve reaching 1700m above sea level, accounting for 50 per cent of France’s species diversity, and the only national park in France to be fully populated by humans], or the lonely, cracked limestone steppes of the Causses – Causse Méjean, Causse de Sauveterre and Causse Noir – under which lies the giant cave of Aven Armand. The Causses encompass wide expanses of the neighboring departments of Aveyron and Hérault as well. 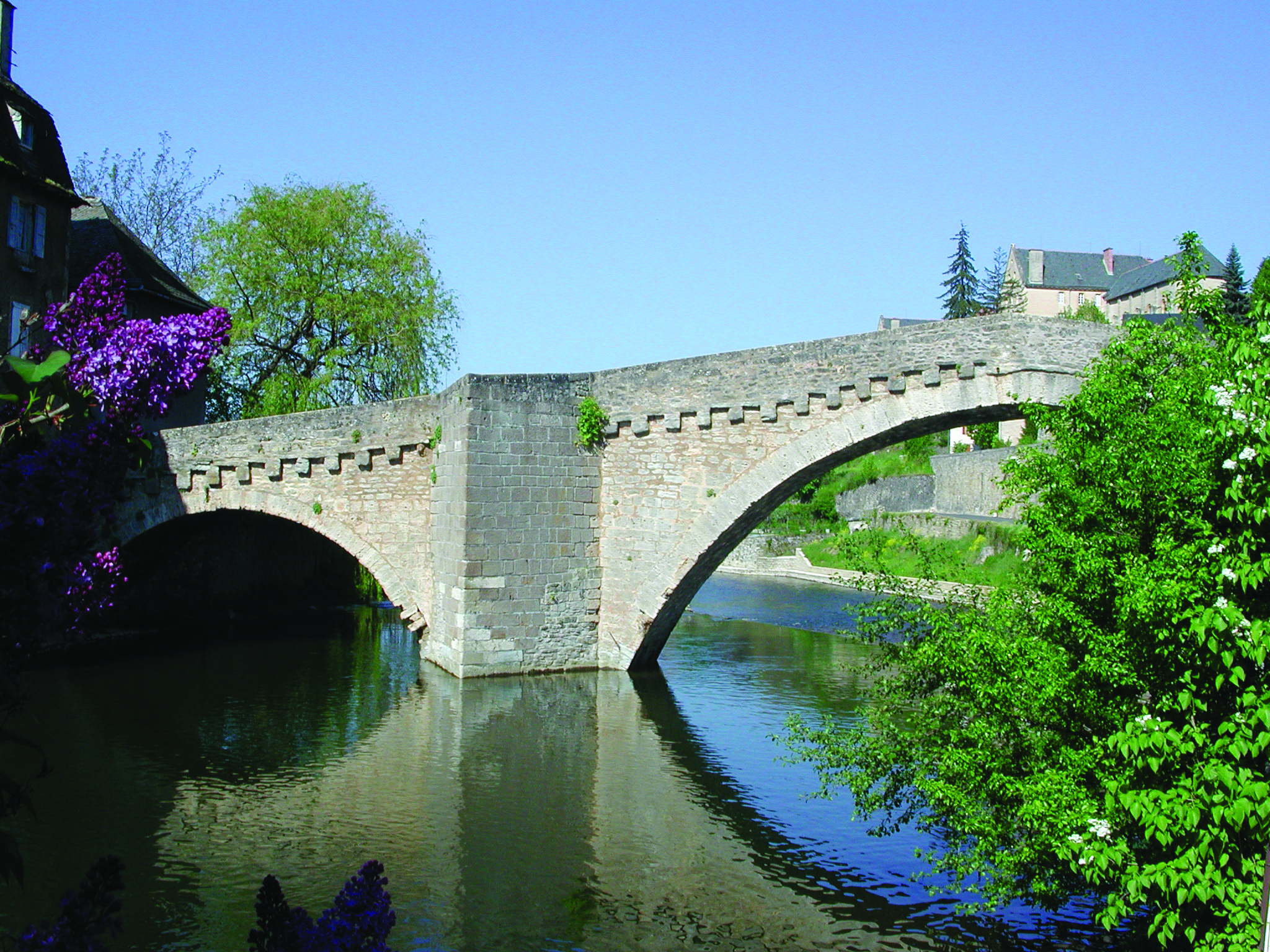 Both the Causses and the Cévennes have recently been awarded the prestigious status of a UNESCO World Heritage Site as examples of a ‘Mediterranean Agro-Pastoral Cultural Landscape’ where nature and human activity coexist in harmony. The small round tangy cheese called Pélardon, typically Languedocian, is actually a Cévennes speciality, made from the raw milk of goats living with the local sheep.

In contrast to the bleak Causses mountains is Mende, the more southern-looking city which is capital of the region. Its most illustrious son was the sixth Avignon Pope, Urban V (1310-1370), born Guillaume de Grimoard in a tiny Gévaudan village, who later become a powerful Bishop of Mende. After he became Pope he remembered his place of birth and ordered the building of Mende’s Cathedral. 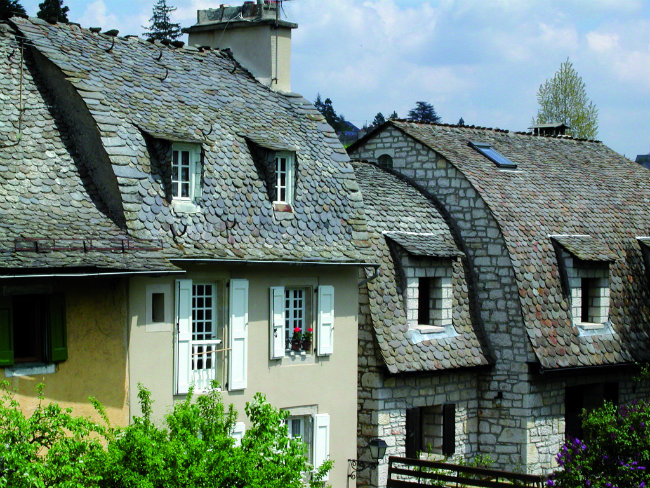 The department retains an air of mystery, perhaps because one of its tiny villages, Bugarach, was supposed to be spared, according to a Mayan prophecy, by the apocalypse predicted for 21 December 2012. Actually, it’s part of Le Pays Cathare (‘land of the Cathars’), where the vertiginous ruins of their castles – Aguilar, Lastours, Peyrepertuse, Puilaurens, Quéribus and ten other ‘citadelles du vertige’ – clung to the rocky hilltops of eerie Hautes-Corbières and witnessed the devastation of the Occitan country during the Albigensian Crusade (1209-1229) followed by the Dominican Inquisition in the 14th century.

A native Audois and the last-known Cathar Parfait was burned at the stake in Villerouge-Termenès: the death of Guilhem Bélibaste (1280-1321) also brought about the end of the southern Cathar Church. A hiking trail, Le Sentier Cathare, now runs through this land of tragic legends, from Port-La-Nouvelle to Foix (Ariège in the Midi-Pyrénées region). The uncompromising supremacy of the Catholic Church underlines the high number of abbeys in Aude, such as Fontfroide and Saint-Papoul. 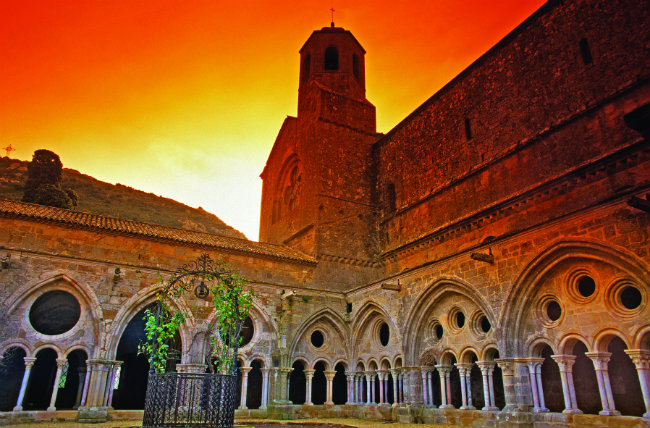 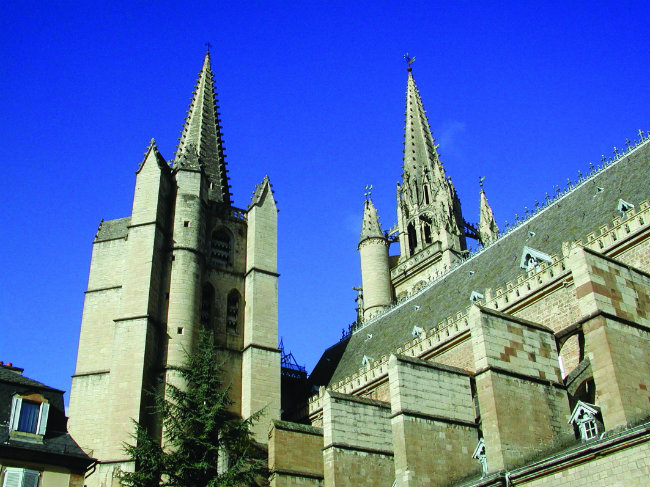 The medieval fortified city of Carcassonne – 52 towers, two rings of walls and three kilometres of battlements – is a UNESCO World Heritage Site which attracts over two million visitors a year. Stunningly illuminated every Bastille Day, Carcassonne is home to the Centre d’Études Cathares.

Aude, however, holds more in store than the Cathars and its vineyards cascading down to the sea. Its contrasted landscapes range from the first Pyrenean mountains (Pyrénées Audoises) in the south-western corner, the rolling and generous countryside of Lauragais, on the road to Toulouse, the tormented Corbières (culminating at Pech de Bugarach, 1231m) with their gorges and caves, to the deep forests of Montagne Noire near Carcassonne and the vast expanse of lagoons forming the Parc naturel régional de la Narbonnaise en Méditerranée. 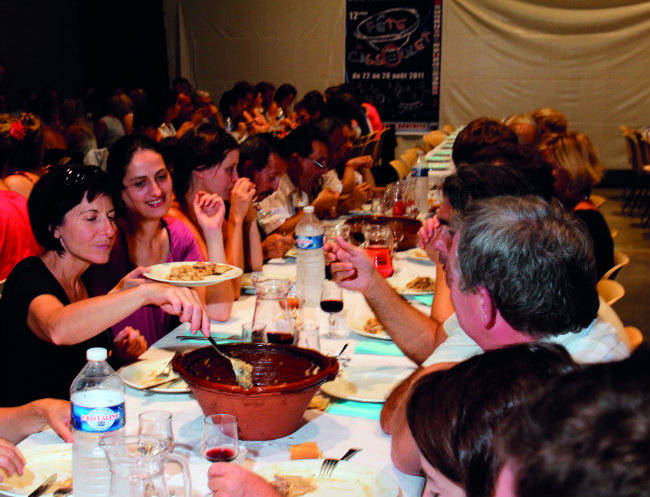 An iconic French character hails from these parts: a son of Roman Narbonne, the legendary fair-haired and blue-eyed singer with the baby face, Charles Trenet (1913-2001), whose cheerful tunes were translated and adapted all over the world.

On the culinary front is the cassoulet of Castelnaudary, a hearty bean, pork and goose or duck confit casserole, baked for hours in a sandstone pot called a cassolo; the town pays homage to it in August with its Fête du Cassoulet. Olives are another pride of Aude, with its olive growers’ cooperative, L’Oulibo (founded in 1942). Languedoc-Roussillon, the first French producer of table olives and the second of olive oil, owes a great deal to it.

As seen in France Today magazine. Catherine Pinchetti’s book The Spirit of Languedoc is out now from Packard Publishing.

For information on visiting the region, head over to en.destinationsuddefrance.com 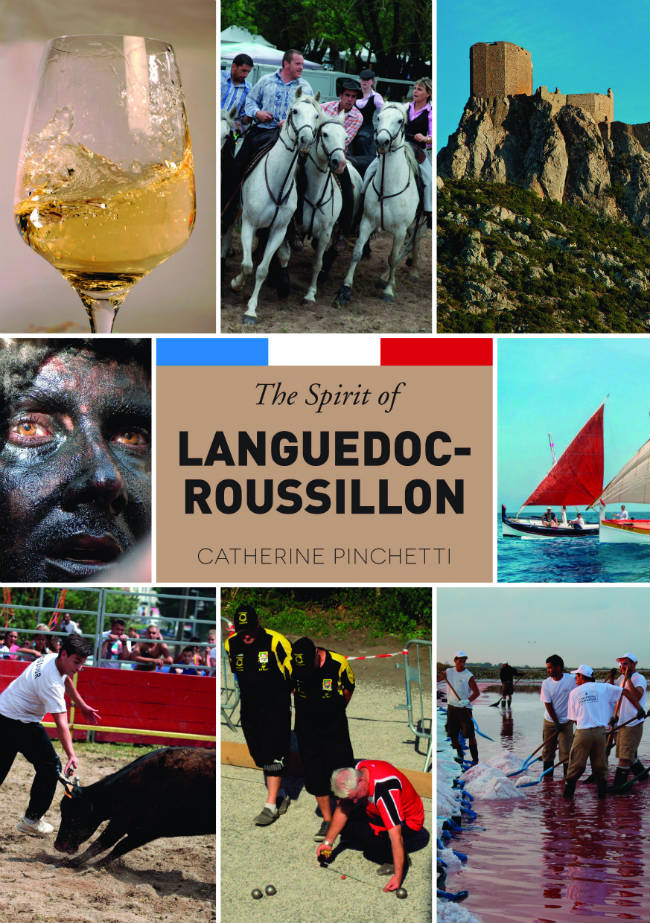 The Spirit of Languedoc-Roussillon by Catherine Pinchetti

Previous Article The Carrefours of France in San Francisco: Hayes and Gough/Octavia
Next Article Hidden France: Memories of the Resistance in the Gers