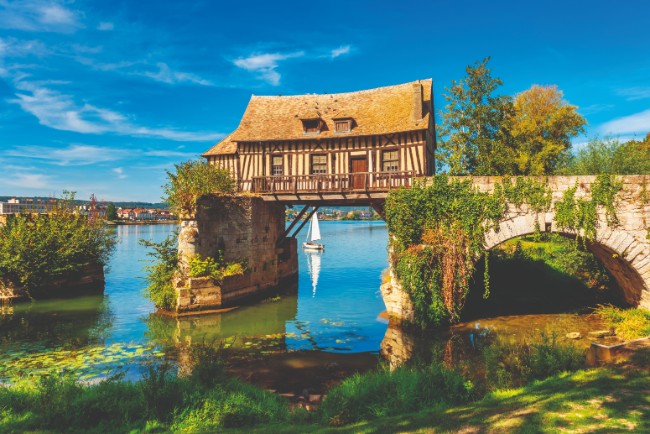 Inland Normandy is often overlooked in favour of its coastal hotspots. However, Eure has a beauty of its own and plenty for intrepid visitors with a passion for the outdoors, art and history to explore, says Claire Vaughan

Flame-orange poppies jostle with lilac irises; the deep red of the wallflowers pulses against tart lime alchemilla; the palest pink tulips rise from frothy drifts of fresh blue forget-me-nots – here a smear of gold, there a dash of purple; I breathe in the colour and sunshine. The wisteria-clad walkway to the house is instantly recognisable despite the absence of the nasturtiums that, come summer, will bubble up from the borders and spill onto the paths. I’m in Monet’s garden in Giverny, in Normandy’s Eure département. 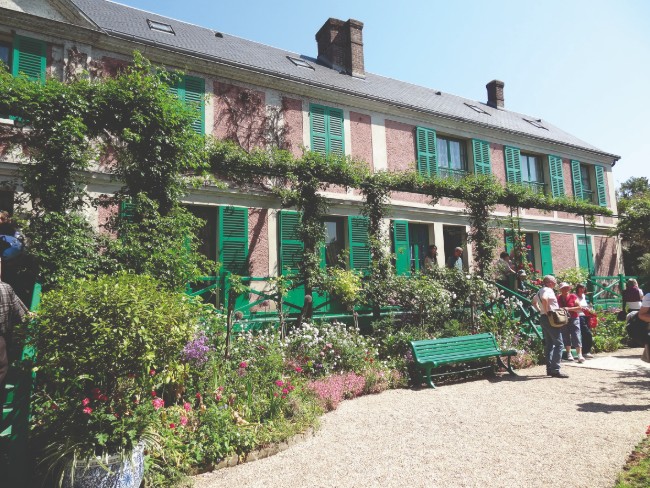 Less than five hours ago, I left a grey, rain-soaked London – hopping on the Eurostar at St Pancras and zipping through the Kent countryside, under the Channel and on to Paris. From there, I took a local train to Vernon – one of Normandy’s closest stops to the capital and just a stone’s throw from here.

No trip to Eure would be complete without a day in Giverny. “The gardeners have recreated it as closely as possible from the pictures, photographs and Monet’s seed catalogues, which you can see in the house,” says my guide, Ombeline. Here, too, are the water gardens with their iconic green bridge and the water lilies – all created by the artist when he moved here from Paris with his two sons after the death of his first wife. The gardens became his muse and his salvation. 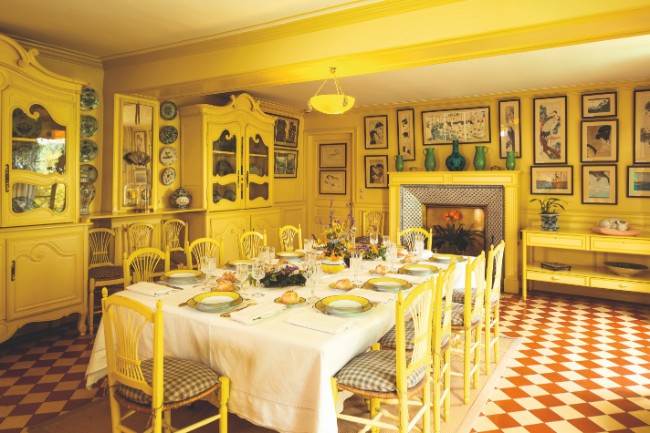 Inside, the house is a kaleidoscope: the sunflower-yellow dining room where Monet entertained his friends and visitors; the blue room, hung with his favourite Japanese prints; and his study – its walls covered with his own vibrant paintings (and now very passable copies). “Monet was modern – ahead of his time,” Ombeline says, pointing out the hot-water tap jutting out from the range in the blue-and-white-tiled kitchen. “He also had electricity installed soon after it became available.”

The artist’s workshop at the Hôtel Baudy. Photo: © ADT de l’Eure, A. Chetcuti

A short walk from the house is the Hôtel Baudy, with its shady terrace and bustling waiters, where Monet and his friends used to meet. Today, just a few doors down is the Musée des impressionnismes, where you can get an overview of the remarkable movement he was a part of. Outside, its gardens – a humble nod to Monet’s – pack their own colourful punch. 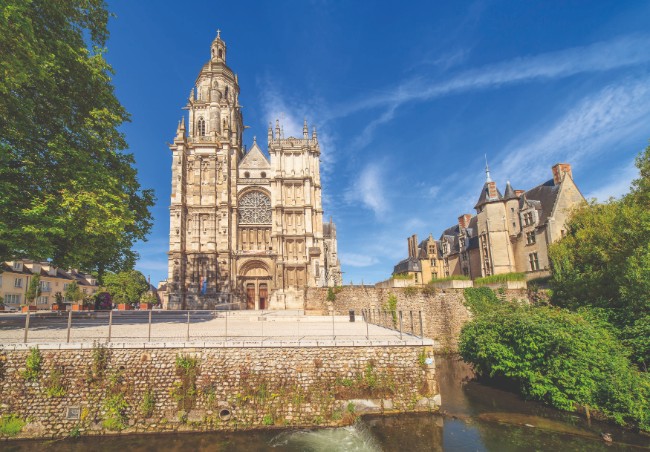 Named after the river Eure, a tributary of the Seine, this département is sandwiched between the coast and Paris, and together with Calvados, Manche, Orne and Seine-Maritime forms Normandy. Its capital, Évreux, is due west of Giverny on the river Iton. Eure has everything you’d expect from Normandy: bucolic landscapes, fields of cows and half-timbered farmhouses, forested plateaus and valleys punctuated with pretty villages (including two ‘Plus Beaux Villages’), and great food. Towards Honfleur you’ll find the Marais-Vernier, an area of marshland where Highland cattle and Camargue horses graze.

Eure just about reaches the sea at one point – at Berville-sur-Mer – but its many charms far outweigh its lack of beaches. Artists’ favourites Rouen, Étretat, Honfleur and Deauville are on the doorstep, and Paris is just an hour from Giverny. Want to fill your lungs with fresh air? Eure is perfect, with opportunities galore for water sports and horse riding, while its voies vertes, such as the one linking Le Bec-Hellouin with Évreux, offer the freedom to hike or cycle with no traffic. There’s also the Route des Chaumières (thatched cottage trail) to explore.

Calvados may have marked the 75th anniversary of the D-Day Landings this past summer, but the liberation of France continued inland and Eure has its own tales of wartime defiance. A series of Allied bombing raids in early 1944 had failed to destroy Vernon’s road bridge over the Seine, which the enemy needed to reach Paris, so the town’s Résistance fighters made a daring bid to blow it up themselves. They succeeded and fought on to liberate the town on August 25, a week before the British troops arrived. 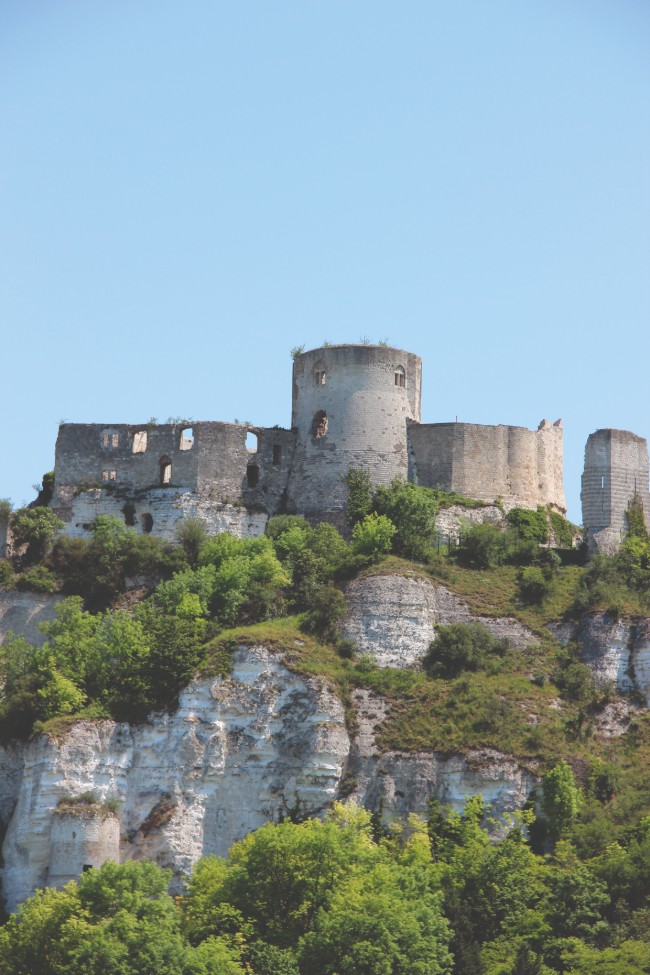 Eure’s earlier history seems to be dominated by the feud between Richard the Lionheart and Philip II of France. Richard inherited Normandy from his father, Henry II, in 1189 when he ascended to the English throne. When Richard was imprisoned on his return from the Third Crusade, his brother John joined with Philip to take power.

Today, from the Château Gaillard’s vantage point high above a meander in the Seine, you can see the river cruisers coming and going, while beyond the sun glints on the domed roof of the Hôpital Saint-Jacques in Les Andelys. Richard the Lionheart’s stronghold was built in 1196 – an advanced design of three enclosures separated by dry moats, with a keep in the inner enclosure. Despite this, after Richard’s death in 1204, Philip seized it. Not much more than the walls remain, but it still has a few tales to tell. A barred cell once held the hapless Margaret of Burgundy, wife of Louis X, following her alleged infidelity. She was later rumoured to have been murdered on the king’s orders. 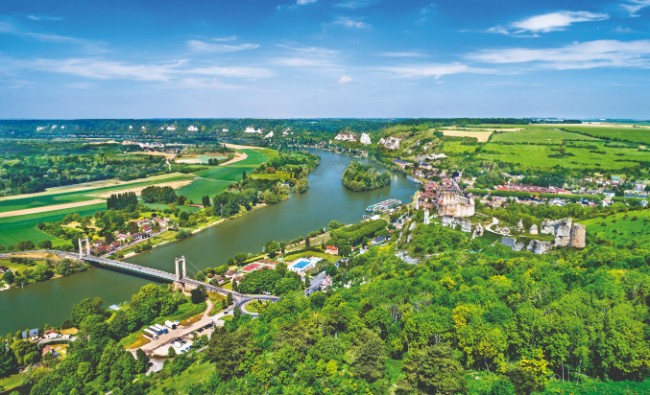 Panorama of Richard the Lionheart’s Château Gaillard showing the view it commands over the Seine at Les Andelys. Photo: Shutterstock

At the end of the 12th century, Robert, Baron of Harcourt (who had accompanied Richard the Lionheart on the Third Crusade), built the Château d’Harcourt. This is a wonderfully preserved medieval castle and has one of the oldest arboretums in France. The building has undergone many transformations, but after lying abandoned for nearly a century it was bought by Parisian solicitor Louis-Gervais Delamarre in 1802, who created the arboretum and left the property to the Royal Academy of Agriculture on his death in 1827. The arboretum has 500 specimens, including nine that have been designated ‘Remarkable Trees of France’. Here I meet two lofty cedars of Lebanon, planted in 1810 by Delamarre himself, standing like sentinels at the entrance to the grounds. Elsewhere there are cork oaks, bald cypresses, tulip trees and dwarf beeches that, as I discover when I step beneath them, have formed a living grotto. 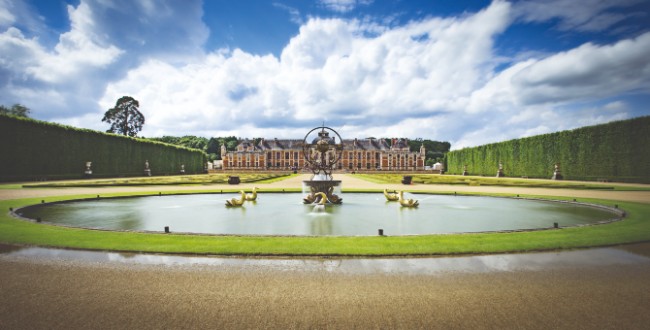 The Château du Champ de Bataille, northwest of Évreux, is an altogether different affair: a gasp-inducing Baroque masterpiece built in the 17th century. Inside it’s decorated in owner and top interior designer Jacques Garcia’s trademark style: all animal prints, taxidermy and cabinets of curiosity, exhibited against backgrounds of epic flamboyance.

As I crunch across the gravelled expanse between the faux formal hedges and parterres in the gardens, it feels as if Garcia is playing surreal tricks. I spy the beacon of a lighthouse poking out through the trees, and peering through the window of a poolside folly I’m stunned by its crystal-studded interior. In the potager, beyond topiary trimmed into about-to-break waves, there’s a secluded orangery packed with turquoise chinoiseries immaculately displayed against a ruby-red background. Through a hedge I glimpse Garcia’s Indian-inspired palace-next-door. It knocks the socks off Brighton Pavilion. 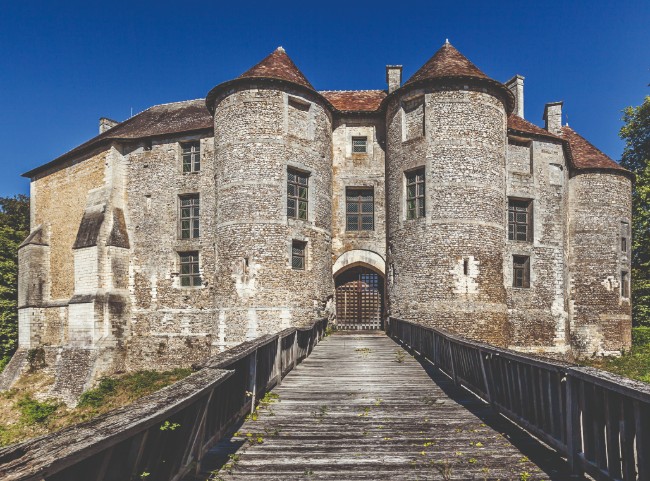 The medieval Château d’Harcourt is famed today for its remarkable arboretum. Photo: Shutterstock

Another showstopper is pretty-as-a-picture Château de Beaumesnil in Mesnil-en-Ouche, built by Jacques de Nonant as a gift for his bride Marie Dauvet Desmarets in 1633. In the 18th century, the countess of Graville extended the gardens and added pavilions, creating a breathtaking retreat. In the mid-20th century, Jean Fürstenberg, a Jewish banker, ed here from Nazi Germany, bringing his collection of rare books, now on display. You can indulge your sweet tooth here, too– making caramel using local butter and cream in the copper saucepan-lined kitchen.

West of Les Andelys, tucked into a crook on the Seine, stands the truly unique Moulin d’Andé. The guidebooks will tell you that the mill dates back to the 12th century and that it’s the last with a hanging wheel still in situ. It’s impressive. The mill produced our for the surrounding communities, including the Château Gaillard, until 1864, when the river was dammed upstream. But it’s far more than a mill…

With help from family and friends, present owner Suzanne Lipinska breathed life back into the moulin. “I have been here for 63 years. I am still here – like a tree,” she tells me conspiratorially as we sit around the big wooden table in the garden. “When I first came, it was very small – just three rooms.” She converted grain stores and stables into more rooms. “Little by little, word spread and we became a cultural place for writers, painters, artists, musicians. We also started organising cultural events, et voilà!”

The mill has been host and muse to writers such as Georges Pérec and Maurice Pons – and backdrop to many films of the French New Wave, including François Truffaut’s Jules et Jim. Alain Delon, Simone Signoret and Romy Schneider have all passed through here. As I explore the mill’s creaking wooden interior, I spot a couch Jane Birkin once reclined on and can’t resist the urge to touch it.

Today people come for courses, weddings, or simply to recharge their batteries. They come to its theatre, too. This year, the European Film Academy named the Moulin d’Andé a ‘Treasure of European Film Culture’ – and I’m not surprised to hear that Suzanne has been awarded the Légion d’Honneur for her contribution to French art and literature. 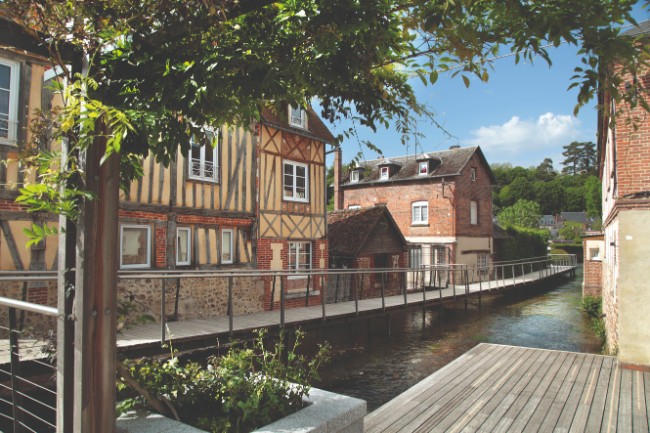 Bernay is a lovely town to just wander around in. Photo: F Grimaud

If you fancy a day mooching round a typical (and very charming) Normandy town, make for Bernay. Highlights of the self-guided tour available from the tourist office include the Abbatiale Notre-Dame – one of the most outstanding examples of Romanesque architecture in Normandy – an array of traditional houses that looks like a film set, the medieval shop fronts on rue Gaston Folloppe, and 9 rue Thiers, a tall Renaissance house that was used as the town hall in the 18th century.

Eure is bursting with head-turning villages too, including two ‘Plus Beaux Villages’. In the north, iconic Lyons-la-Forêt, with its 17th- and 18th-century houses clustered round a covered market is set in France’s largest beech forest. Kings and dukes have dallied here – and more recently the composer Ravel and artists Masson and Pissarro.

Southwest of here, another ‘Plus Beau Village’ awaits, its traditional houses decked with sunny blooms. At the heart of Le Bec-Hellouin is the impressive Abbaye Notre-Dame du Bec, built in 1034 by a man called Hellouin in cool, pale stone. Its gatehouse, bell tower and living quarters remain defiantly intact; the latter still houses 15 monks who make pottery to sell to visitors. Parts of the church were destroyed during the French Revolution. During the Hundred Years War, the abbot, fearing attack, ran a scorched-earth policy that destroyed much of the village. It’s hard to believe looking at the village today.

Exploring this often-overlooked département has been a real eye-opener, but whatever you’re looking for in a trip – outdoor adventures, a window on the history and culture of Normandy, a creative retreat, or just the opportunity to potter around a truly unforgettable garden – Eure delivers. 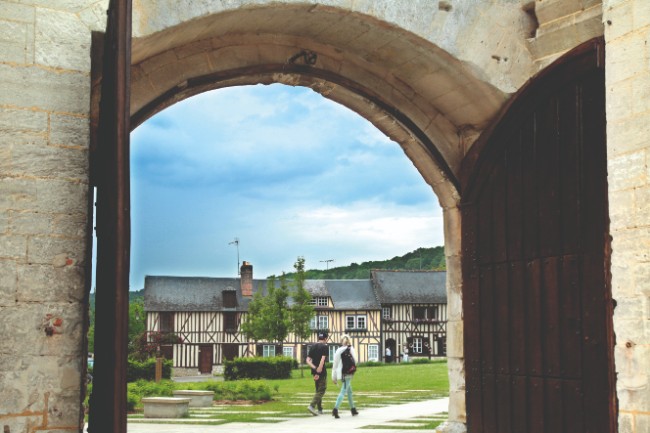 It’s hard to believe that the village of Le Bec-Hellouin was largely destroyed during the Hundred Years War. Photo: F Grimaud

Claire Vaughan has travelled around France extensively-- and loves all things French, especially the food. She has written travel and property features on the country for various publications, including FrenchEntrée, French Holiday Inspirations and A Place in the Sun.