Gardens, Grapes and Gastronomy: A Trip to Bourges and the Berry 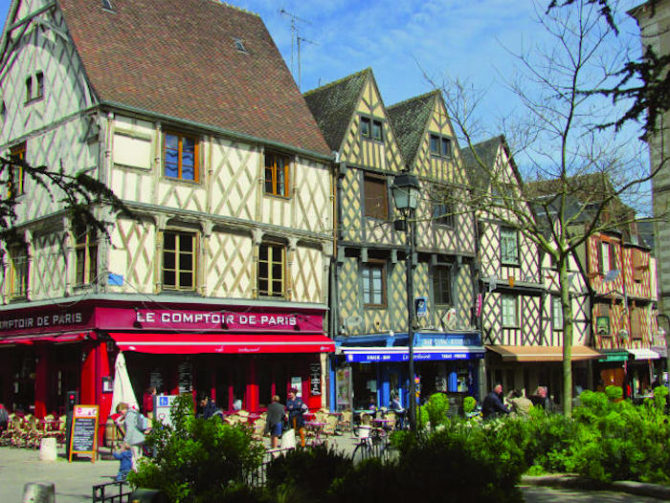 Whatever age you live in and whatever your line of work, it rarely pays to upstage the boss. Ask anyone in Bourges, third largest town in the Centre region and a great base for exploring the south-east corner of the ancient province of Berry.

In the mid-15th century, local merchant Jacques Coeur developed a thriving trade in luxury goods with the Far East, and with it, an increasingly lavish lifestyle. The newly-crowned King Charles VII made Bourges his capital in 1422 and, before long, the enterprising Monsieur Coeur had risen high enough to be appointed Steward of the Royal Expenditure. Big palatial property. All the right friends. Seemingly on the up-and-up until, that is, the main man became envious. 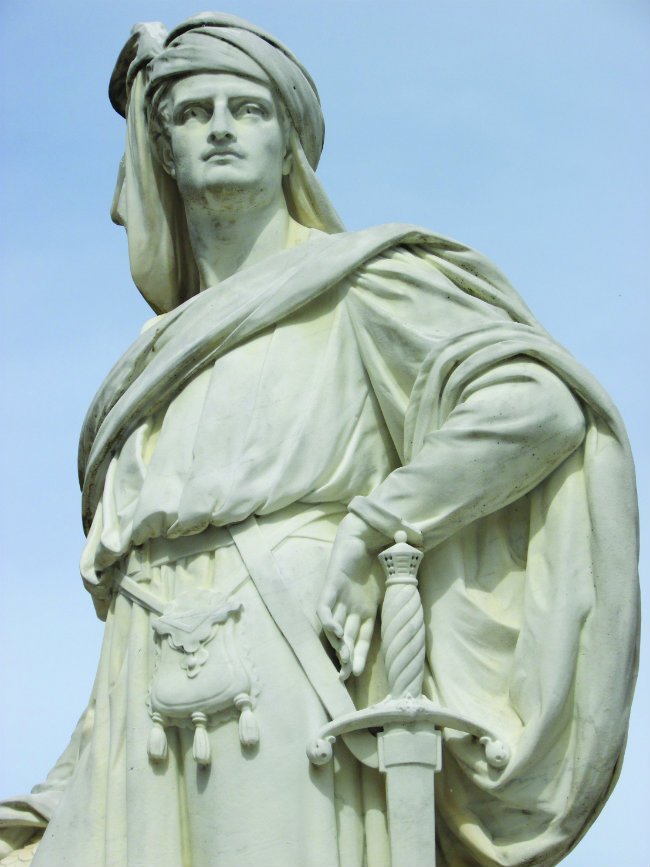 The Heart of Bourges

Jacques was arrested on charges of fraud in 1451 but escaped to Rome, conveniently dying on a Crusade to the Holy Land. So Charles had the last laugh. Or did he? Come to Bourges today and Jacques Coeur’s former palace is still one of the town’s most impressive buildings, a lasting memorial to the man who made his fortune but, with it, a royal enemy.

The gleaming stonework is adorned with carved hearts – what else with a surname like his? – as well as scallop shells, a play on Coquilles St Jacques, symbol of the Compostelle pilgrims who still pass through Bourges en route to northern Spain. Today, however, most visitors arrive by car for a stopover on a journey south or westwards to the castles and gardens of the central Loire Valley.

Bourges’ historic centre is easy to explore on foot and, thanks to the towering bulk of the UNESCO-listed cathedral, it’s impossible to get lost. Dedicated to Saint Étienne, the first Christian martyr, this is a building that’s big on impact, both inside and out. 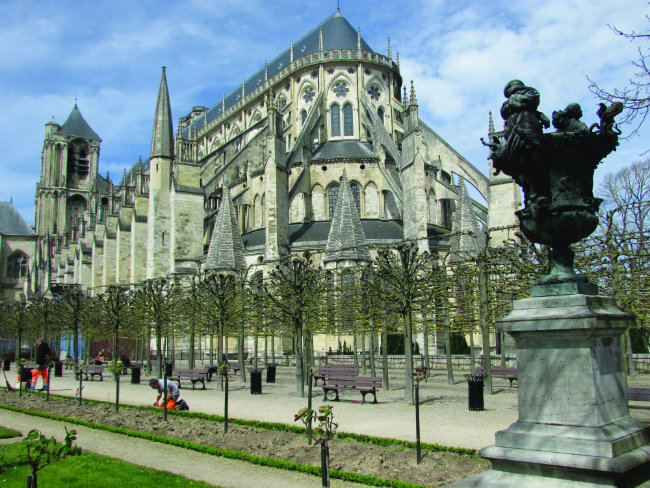 The west door packs a punch with its five intricately carved arches, but so too do the mismatched towers, the North tower rebuilt in the 16th century after the original 13th-century twin fell down. It has the widest exterior of any cathedral in France, thanks to an arch that links the separate bell tower to the main building, and the highest interior at 37 metres.

And just when you think you’ve taken in all these record-breaking dimensions, you spot the windows, some of the finest medieval stained glass anywhere. Paid for by the wealthy trade guilds of the Middle Ages, they feature bakers and bricklayers, stone masons and wheelwrights. And all at eye level so it’s easy to admire the rich colours and miniature characters. 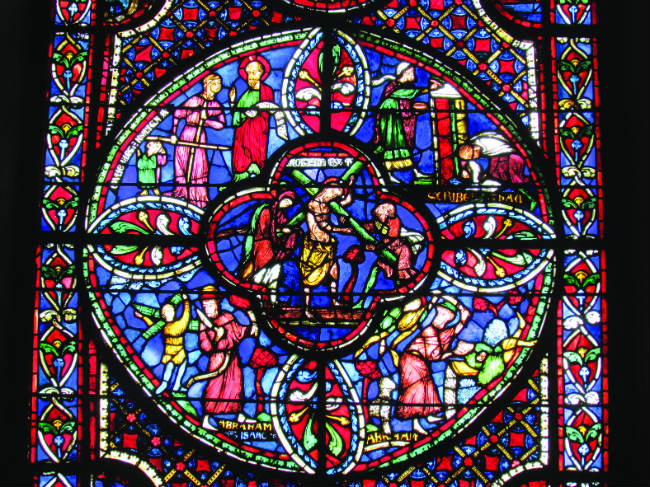 King Louis XI was born in Bourges and continued to favour the city, creating a prestigious university in 1453 with faculties of Law, Theology and Medicine. Today, Bourges has a population of 75,000 but you can still get a tangible sense of the prestigious medieval town in the streets around the cathedral.

Half-timbered houses with upper storeys still overhang the streets – an ever-present fire risk in centuries past. Turn off picturesque Rue des Boubonnoux and follow the Promenade des Remparts which winds round beneath houses founded on the ancient city walls. Enjoy a café stop at Place Gordaine and follow some of the steep narrow staircases or casse-cou (‘break your neck’) between the bourgeois upper town and working class community below.

Bourges boasts a number of museums, many of them housed in splendid mansion houses such as the Renaissance Hôtel Lallemant, now home to the Decorative Arts Museum. Sadly we can only imagine the once splendid furnishings of Jacques Coeur’s fabulous Gothic palace, where one empty room leads to another. Used as a town hall, then a law court in the 19th century, the interior was badly damaged but has been painstakingly restored and is still worth a visit. 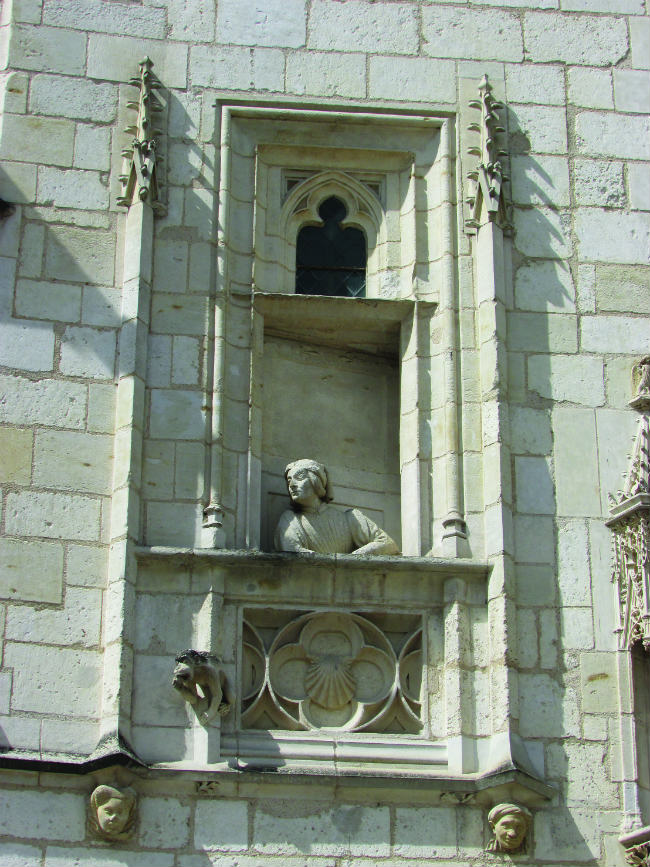 You can, however, get first-hand experience of gracious living at Hôtel de Panette, a glorious 18th-century building behind a huge stone gateway with secluded garden, just minutes from the cathedral. Accommodation options include eight self-catering studios and apartments or – highly recommended – three palatial B&B rooms. I slept beneath a golden crown in a vast bed in the room once occupied by exiled Don Carlos de Bourbon. Proclaiming himself Charles V of Spain in 1833 contrary to new laws put in place by his father, he was exiled in 1839 and eventually abdicated here in 1845.

There are no evening meals at this beautifully restored property but it’s a great excuse to take a 15-minute stroll to Le Cercle, a contemporary-style restaurant serving Michelin-starred fare in a 19th-century mansion in the old military district. And what nicer way to finish the evening than by walking back past the floodlit cathedral?

Bourges organises a full programme of tempting events and performances including a five-day music festival – Le Printemps de Bourges – in April and Les Nuits Lumière in summer, when animated light shows are played out around the medieval centre. But whenever you visit, don’t leave town without a tranquil walk through the Marais de Bourges, one of just three marshland market gardening areas left in France along with Saint-Omer and Amiens.

Just ten minutes from the Old Town, this is a tranquil green space where cars are forbidden so you won’t see it signed from the road, but the free map from the Tourist Office will show you exactly how to reach this unexpected gem. One of the best kept secrets of the Berruyers – as Bourges residents are known – it has a popular restaurant in the centre too. 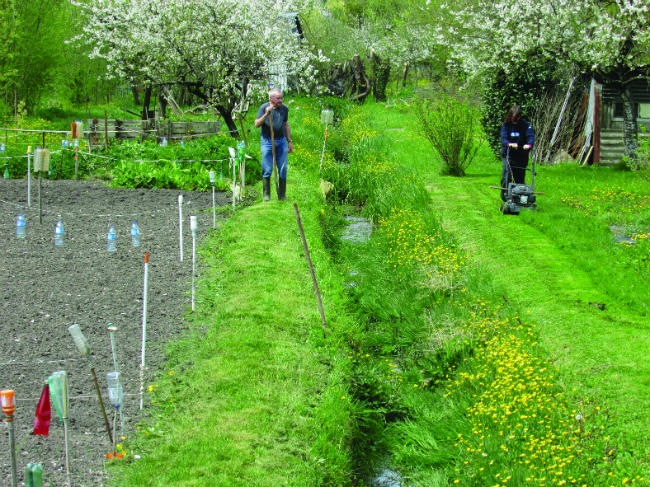 Residents of the wider Berry region are known as Bernichon and for garden enthusiasts, active and passive, this south-eastern corner of the Berry is home to some delightful and inspirational plots. Head south from Bourges and the castle and garden of Ainay-le-Vieil makes a delightful day out with its historic rooms, rampart walk, and themed garden ‘rooms’. Or head east to the Plus Beau Village of Apremont-sur-Allier, a picturesque community of thatched cottages overseen by a hilltop mansion and glorious public garden.

Head north-east and you can explore – and even stay over – at Le Jardin de Marie, an inspirational garden created from scratch by Marie Marcat who bought the small hillside farm for its sweeping valley views. Retiring from her job in television, Marie undertook landscape training at Versailles in her 50s, converting her fields into an organic rose garden and an enchanting white garden, a herbaceous area, rockery and potager.

Marie’s passionate affair with the land lies just a short way from the famous white wine vineyards surrounding the small hilltop town of Sancerre. Follow the red lines on the pavement to visit points of interest, each one numbered and accompanied by an information panel. And don’t miss the Maison des Sancerre next to the church. 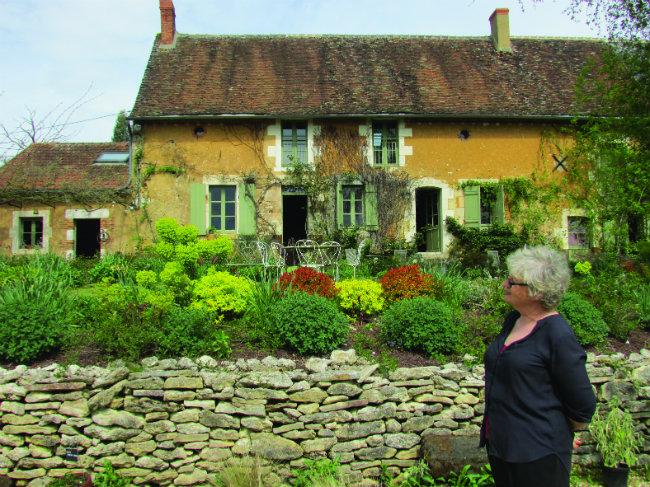 I learned a lot at this interactive discovery centre including the fact that Sancerre has 300 winemakers and almost as many wines, given the huge variety in soil and orientation from one small vineyard to another. A good animated 3D map explains the serious matter of the local terroir, though I was somewhat bemused by the ‘4D’ film in which a cartoon ladybird with an Australian accent guides visitors – masquerading as grapes – around the vineyards. In just a few short minutes, I was sprayed with water, shaken about in my seat, and blown on with cold air.

Still, there’s lots to discover here and the visit ended well with a tranquil glass on a sunny terrace. Below, sweet scents wafted up from a perfumed garden and beyond, those famous vineyards rolled out to infinity. The real thing, this time, in every sense of the word. Santé! 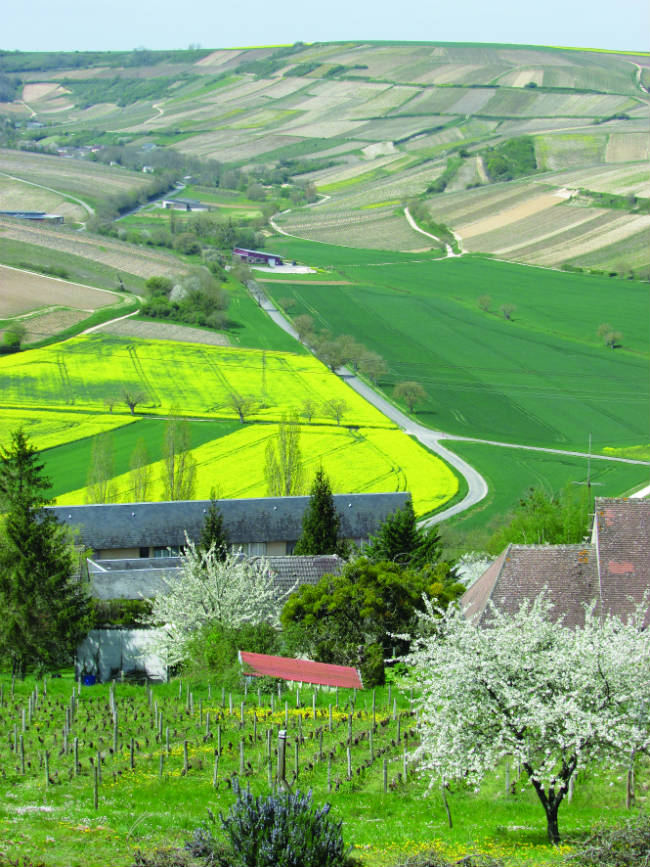 Gillian travelled from Folkestone to Calais with Eurotunnel: www.eurotunnel.com. Alternatively, you can travel by train from London St Pancras via Paris: www.voyages-sncf.com. 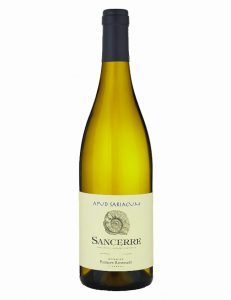 Les Nuits Lumière de Bourges: Light show in the medieval town. Thursday, Friday and Saturday evening, last half of June and first half September; every evening in July and August. Free admission.

HENRICHEMONT – THE ROYAL TOWN THAT NEVER WAS…

Take a close look at your Michelin atlas and you’ll see a country road marked as a scenic route heading north-east from Bourges through the Haut-Berry to Henrichemont, roughly equidistant from Sancerre. There are other small towns in the vicinity but what stands out about this one is the grid pattern of its streets. An invitation to investigate if ever there was one!

Henrichemont was founded in the early 17th century by Maximilien de Béthune, future Duke of Sully, intended as an ‘ideal’ Renaissance town to honour his king, Henri IV. Sited on a plateau 285 metres above marshland, the ‘mont d’Henri’, Henrichemont’s first stone was laid in April 1609 in the presence of the monarch. But less than a year later, Henri was assassinated and work stopped.

Building didn’t resume until 1612 and though the town did develop into a busy leather and textile centre in the 19th century, Henrichemont never assumed the proportions originally envisaged. Today you can sit in the cosy Volup’Thé tea room on Place Henri IV and stroll broad avenues dotted with imposing buildings to imagine what might have been, had the king’s life not been cut so tragically short.

Nicknamed ‘The Fisherman’s Castle’ because of its collection of stuffed fish and fishing memorabilia, Château de la Bussière is a delightful, family-run property on the borders of Centre-Val de Loire and Burgundy. For holidaymakers used to more crowded châteaux further west, this lovely estate is a tranquil change.

For its charming owners, Laure and Bertrand Bommelaer, their situation off the main château circuit must have its frustrations. Yet their imposing home, surrounded by water and reached across a narrow bridge, is easily accessed from the A77 motorway from Paris. Just take the exit 19 for Gien.

Outdoors, there’s a delightful kitchen garden and orchard to enjoy plus lakeside walks; inside, lavishly furnished rooms and a magnificent Louis XIII kitchen. And, of course, those fish. Pride of place goes to a huge coelacanth, a prehistoric fish brought up from the depths off Madagascar by Laure’s great-uncle.

With activity trails for children, Château de la Bussière is a lovely spot to spend an afternoon. It’s open from the end March to Nov 1st, but check the website for opening times. Adults €9; children €6.50. www.chateau-de-la-bussiere.fr 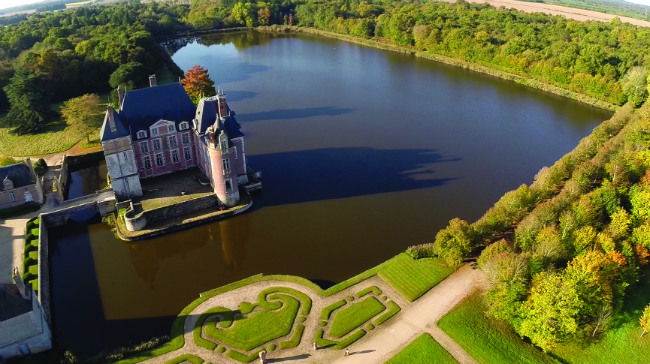