A Guide to the Villages of the Luberon 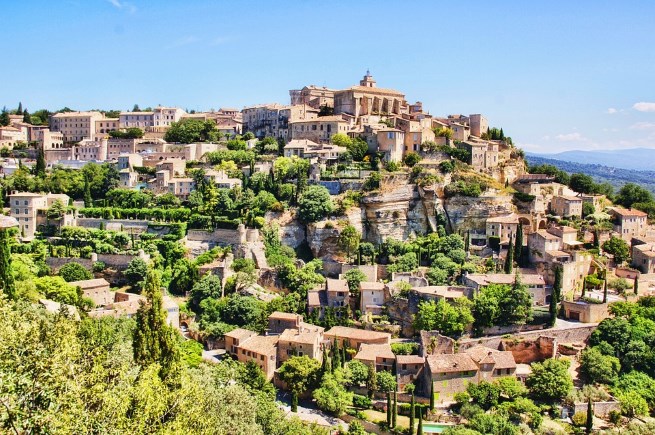 When we think of Provence, chances are we’re thinking of the Luberon. This historic region between Aix-en-Provence and Avignon is perhaps the most beautiful in France, with rolling hills streaked with lavender and medieval villages perched atop ancient rock formations. The Luberon has long been a favourite destination for those seeking la belle vie  in the south of France, and with good reason; year after year the villages here never seem to lose their charm.

Perhaps the most well known of the Luberon’s hilltop villages, thanks in part to Ridley Scott’s truly awful film A Good Year, Bonnieux is also one of the most picturesque in France. A spiral of cobbled streets wind their way up to the medieval church that sits at the highest point in the village, rewarding those who make the arduous climb with fantastic views of the valley below. On a clear day you can expect great views of Mont Ventoux, the infamous chalk topped mountain feared and revered by cyclists and followers of the Tour. 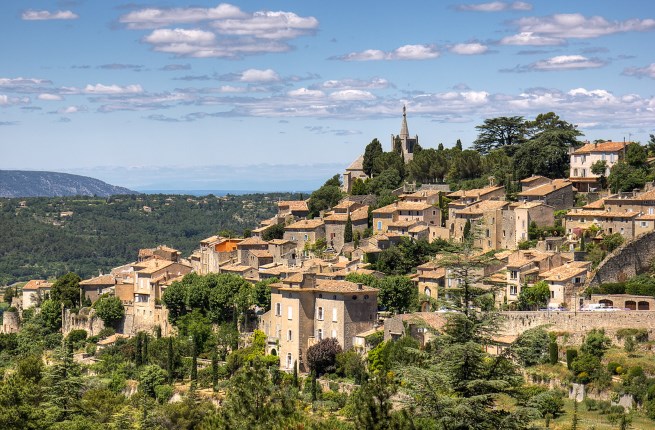 A market is held each Friday in Bonnieux, where local produce is sold, from fresh goat’s cheese to authentic Provencal soap. This market makes for an altogether more relaxing experience than in other, busier villages in the Luberon, taking just half an hour or so to stroll around. There are a number of restaurants and cafes in Bonnieux, ranging from the up-market to the easier-on-the-wallet. A beer or a coffee overlooking neighboring Lacoste never goes amiss.

Over the plain from Bonnieux, perched atop a similarly sized hill, lies Lacoste. This is a village steeped in history, both old and contemporary. In the 18th century the Château de Lacoste, the castle that dominates the village, was home to one of the most notorious figures in French history: the Marquis de Sade. It was here in Lacoste that de Sade carried out his debauched acts which led to his writing of The 120 Days of Sodom, bringing the word ‘sadist’ into our dictionaries. The castle is now owned by fashion royalty Pierre Cardin, who holds cultural events here, showcasing his latest creations. 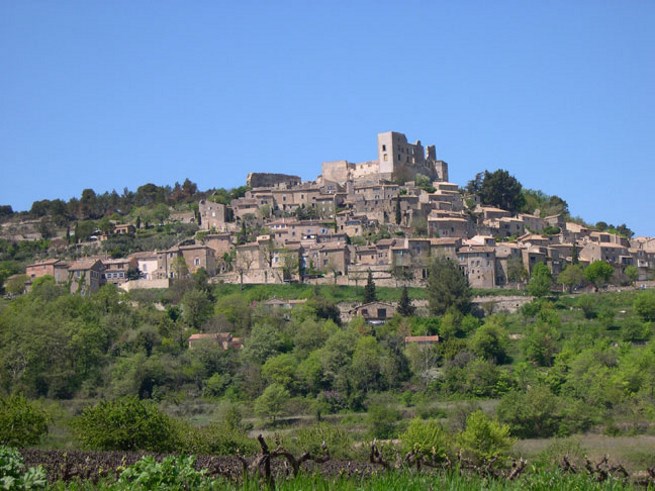 The village of Lacoste has the sleepy feel of a village frozen in time, where the click-clacking of footsteps on cobblestones and the gentle murmur of wind through cypress trees are the only sounds disrupting the silence. There is a pathway that leads all the way to Bonnieux, taking roughly 45 minutes: a perfect way to spend an afternoon.

Awarded the ‘plus beaux villages de France‘ title, Lourmarin is another enchanting town in the Luberon with a history of famous residents. Albert Camus, one of the most influential 20th century writers, is buried in Lourmarin where he spent his last years, and Winston Churchill chose this village after the war to pursue his lifelong interest in oil painting. Today Lourmarin is a fantastic place to visit for its wealth of cafes and restaurants, which offer some of the most authentic Provençal food in the Luberon. 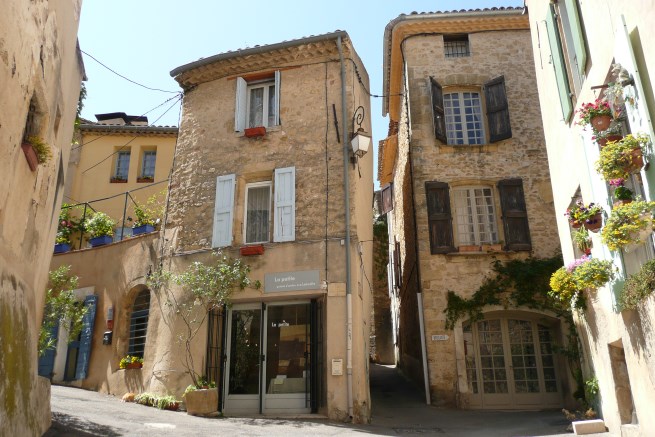 East of Bonnieux and Lacoste, Cucuron is another village best visited on its market day, held every Tuesday. Stalls congregate in the village centre, around an impressive stone bassin, selling farm produce and delicacies from around Provence. After a coffee outside the local cafe, there is a crumbling walled fortress to explore, free of charge.

While not specifically a hilltop town, Apt is worth an honorable mention here as one of the larger towns in the Luberon. The market held on Saturday is probably the biggest in the area, and can take a couple of hours relaxed sauntering to complete. As Apt is not generally considered a tourist town, there is an interesting diversity of people, shops and restaurants here as well as a vibrant vide-grenier, or carboot sale, where bargains can be had. Apt has a thriving cafe scene, with tables spilling out on to every street; here you will be serenaded by Django Reinhardt-esque three-piece buskers, providing a jaunty little soundtrack to the laid-back atmosphere.

Follow the road south-east out of town, climbing up steep, winding roads, and you will find the enchanting little commune of Saignon. This tiny little village is built into, and around, a monolithic rock formation resembling a towering stone castle, accessible by an iron-age pathway. At the top, expect to be blown away by the panoramic views of the Luberon, and a nifty little circular map allows the identification of pretty much all the villages mentioned in this guide.

If you continue up the same road leading from Apt to Saignon, you will eventually come to the villages of Castellet and Auribeau. Life in these isolated outcrops at the foot of the Mourre Nègre mountains has remained fairly unchanged for the last hundred years, with local farmers steering nomadic herds of goats across the rocky countryside. There are two reasons why these villages receive a mention in this guide; firstly because Castellet contains one of the oldest lavender distilleries in the country still working today. Lavender is taken from the surrounding fields which bloom deep purple in early summer, and boiled down to create essential oil for soaps and perfume. Bottles can be bought by the liter for a fraction of the price you would pay in any boutique, and as you watch the farmer fill them straight from the still you know its the good stuff. 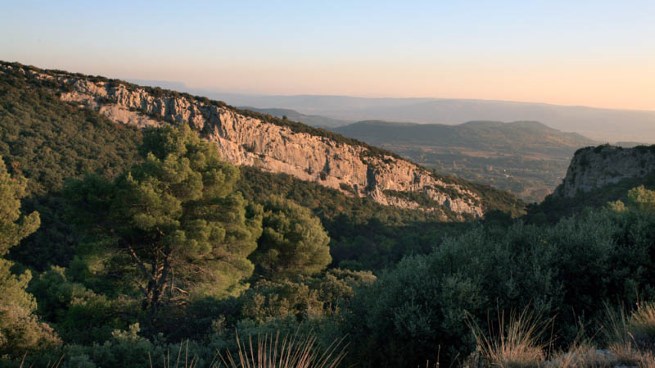 The second reason is because Auribeau marks the starting point for the breathtaking Mourre Nègre hiking route. This old smugglers trail takes you 1,125 meters above sea level through the mountain range, taking between 4 and 10 hours depending which route you chose. On the trail you can find artifacts from the days when donkey carts would carry salt through these wild passes to avoid highwaymen and bandits. 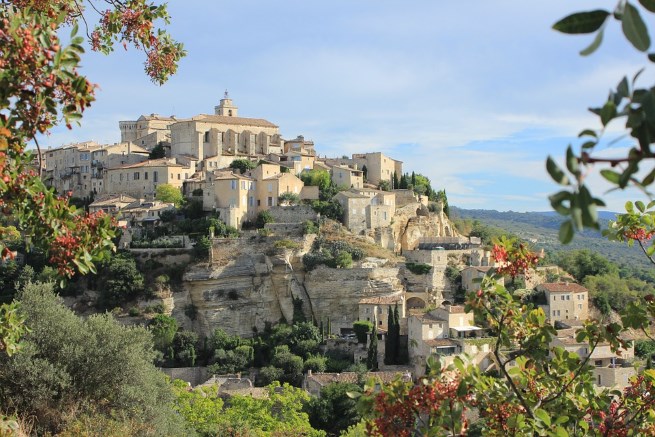 Just half an hour away from Avignon, Gordes is the jewel in the Luberon’s crown. This compact hilltop town at the foot of the Vaucluse Mountains has become one of the trendiest places to live in Provence, with artists such as André Lhote, Marc Chagall, Victor Vasarely and Pol Mara all living here at some point in their lives. A favourite sight to see in Gordes is the ancient Borie village which was lovingly restored in the 1970s by a team of archaeologists and locals. These impressively complex stone houses were once the homes of shepherds and agricultural communities before the industrial revolution, and make for a fantastic place to take a picnic.

Previous Article Gardens, Grapes and Gastronomy: A Trip to Bourges and the Berry
Next Article French Cinema: Profile of Star Actress Audrey Tautou