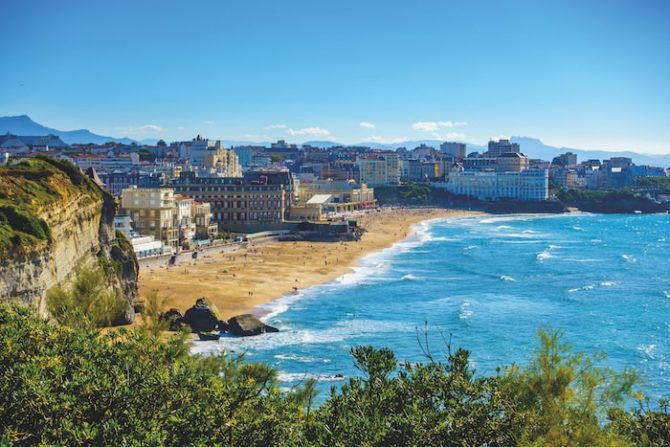 The three Basque provinces of Nouvelle-Aquitaine have much to offer. Gillian Thornton explores this unique corner of southwest France.

Dinner at Port Vieux in Biarritz is an experience to savour – not just for my plate of delicious fresh sea bream on the al fresco terrace at L’Arena, but for the free light show that goes with it. On a warm September evening, I’m watching the sun sink over the Atlantic Ocean in ever-changing shades while the evening bathers turn to silhouettes on the sheltered beach below. What a spectacular welcome to a week in the French Basque Country!

Nestled in the deep southwest of Nouvelle-Aquitaine, the triple whammy of B-A-B isn’t instantly recognisable on any tourist map. The conjoined towns of Biarritz, Anglet and Bayonne share the same administration but offer three very different experiences in an area that is quite unlike any other part of France. 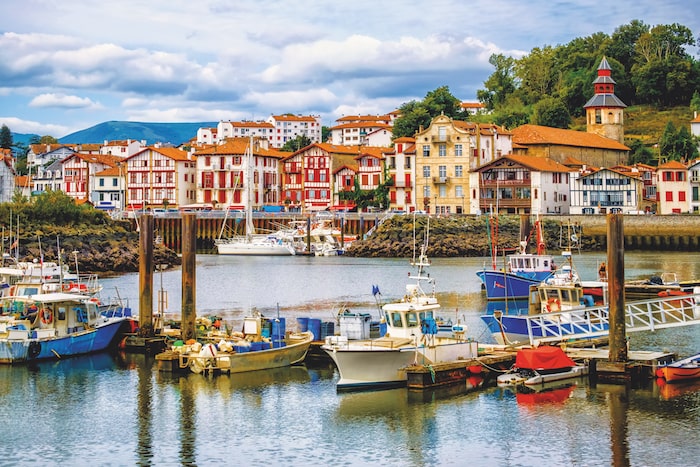 Saint-Jean-de-Luz is an old fishing port that has transitioned into a summer resort. IMAGE © SHUTTERSTOCK

The Basque Country is a land that straddles the border between France and Spain and has no official boundaries. The people here are French, but they have a strong cultural identity concerning everything from the Basque language and sport to favourite dishes and lifestyle traditions. Think lively festivals and passionate rugby games, daredevil surf dudes and the sport of pelote basque, a uniquely local version of squash that here often goes by the simple Spanish name of pelota.

The seven provinces of the Basque Country straddle the Atlantic end of the Pyrénées, with four of them in Spain and three smaller ones in France: Labourd nearest the coast, then Basse-Navarre and finally Soule. And yet the French Basque Country makes up just one half of Pyrénées-Atlantiques, aka département 64 – which is a number you’ll see emblazoned on a popular local brand of clothing.

At its heart lies B-A-B. The elegant Atlantic coast resort of Biarritz morphs seamlessly into the laid-back ‘Little California’ lifestyle of residential Anglet and then on to the historic river port of Bayonne, the official capital of the French Basque Country. And if this trio of towns with one beating heart sounds intriguing, wait till you see what’s behind them. 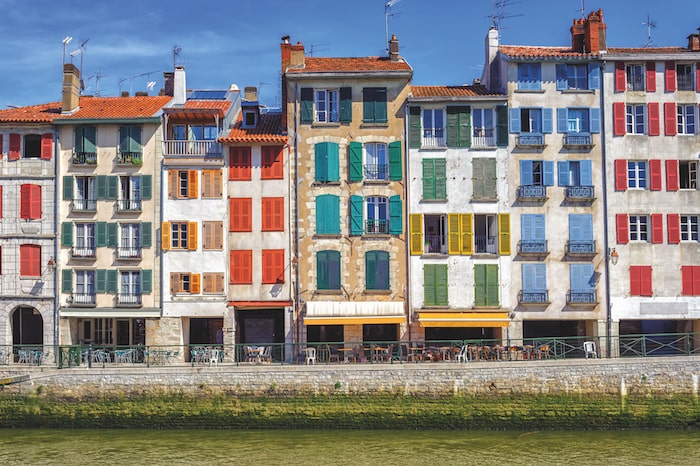 Traditional houses in Bayonne, their window shutters painted in a variety of bright colours that catch the light reflected in the water. IMAGE © SHUTTERSTOCK

An upbeat area with a permanent smile on its face, the French Basque Country comes in a myriad of shades, from the sparkling blue of the coast to the green foothills and valleys of the Pyrénées; from the red, white and green of the Basque flag and the brightly-painted houses to the multi-coloured stripes of traditional linens.

The sandy beaches of the French Côte Basque stretch from the Nive estuary in the north to the Spanish border. Turn your back on the Atlantic and you’re faced with a succession of valleys and villages until the Basque Country ends without ceremony or tangible border, where the red-and-white half-timbered architecture gives way to the stone of Béarn.

For a welcome return to the area, I planned an early autumn circuit when temperatures are still in the 20s. Fly into Biarritz (the airport is just 5km from the city centre) and you immediately notice that the signs are in two languages, French and Basque (Euskara). Widely taught in schools, this ancient language is a dream for Scrabble fans, liberally peppered as it is with high-scoring Js and Qs, Xs and Zs – so Toutes Directions becomes Norabide Guziak, and rue de la Mer translates as Itsasoko Karrika.

Biarritz hit the aristocratic headlines in the 1850s when Napoleon III and his Spanish wife Eugenia built their summer palace here, now the Hôtel du Palais, scene of the 2019 G7 summit. For less grand but equally convenient rooms, I’d recommend the seafront location of the Hôtel de l’Océan, close to the restaurants of the old fishing harbour. 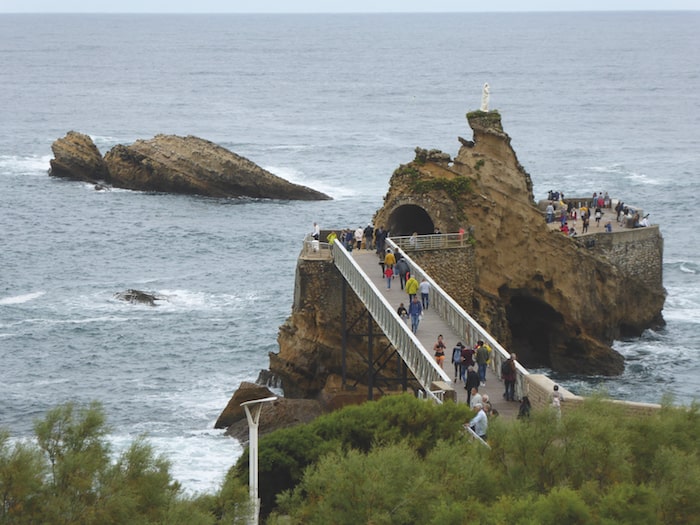 Head one way to the casino and Grande Plage, the other for the excellent aquarium and the offshore statue of the Virgin Mary, reached by a walkway above the waves. South of the emblematic Virgin lie the restaurants of Port Vieux and the legendary Côte des Basques. Surfing arrived here in 1956, spearheaded by the American filmmaker Peter Viertel, who amazed local youngsters by standing upright on his longboard. Today, the resort’s surf culture ensures that Biarritz remains elegant but never stuffy.

South of the town, you can learn about the science behind surf and the sea at Cité de l’Océan. Fun new additions include a 4D adventure beneath the waves, virtual surfing and the chance to ‘interact’ with virtual polar bears, penguins and killer whales. 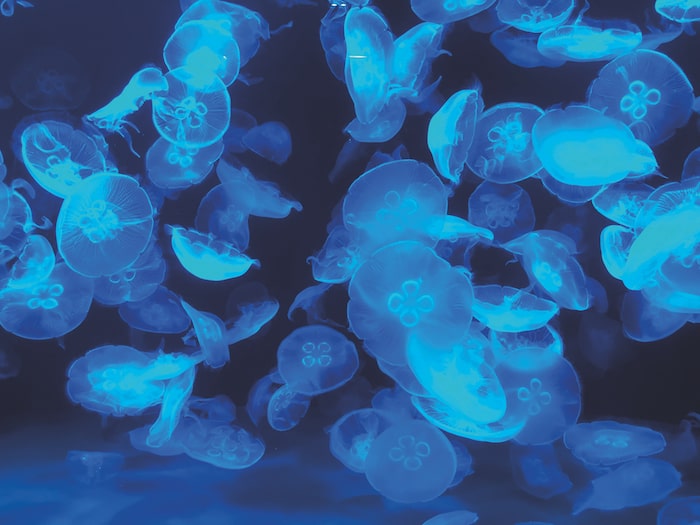 I can’t turn away from the Basque Coast without visiting Saint-Jean-de-Luz, a gem of a seaside resort that combines royal history, family fun and the very best of local produce and crafts. A young King Louis XIV married the Spanish princess Maria Theresa here in 1660, but it was Napoleon III who saved the town from ruin by the Atlantic waves, ordering the building of a sea wall that today gives Saint-Jean-de-Luz a safe, sheltered beach.

Here, browse the boutiques for traditional Basque Country products and gorge on delicious macarons from Maison Adam – the scrummy treats were served to Louis XIV before his wedding! – soft kanouga caramels from Pariès and crispy espelines (caramelised almonds with a hint of Espelette pepper).

And unless you are absolutely sure you can resist the colourful espadrilles, handmade leather bags and Basque linens and home accessories on offer, take a credit card and a big shopping bag! 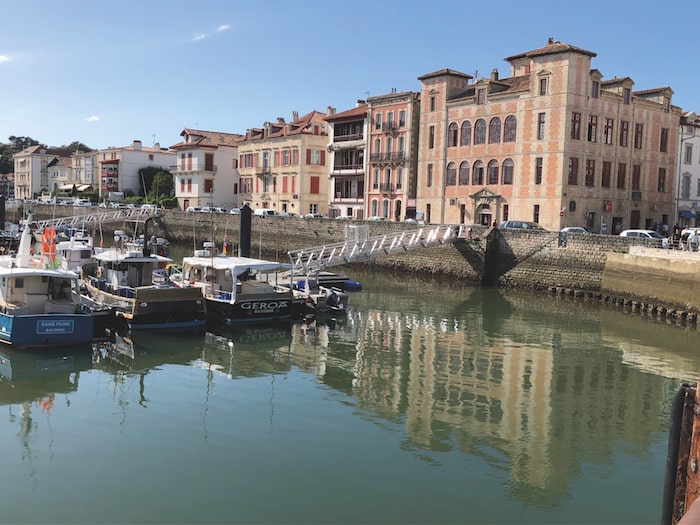 The main shopping street finishes at the colourful fishing harbour, overlooked by the Infanta’s House (now private property) where Louis XIV’s bride stayed before her wedding. Across the harbour in Ciboure, private pleasure boats moor up beneath the house where composer Maurice Ravel wrote Boléro. Follow quai Maurice Ravel to Socoa near the fortress for a unique wine tasting experience at Egiategia, the only company that vinifies its wines beneath the waves – its barrels are gently agitated at a constant temperature in large containers tethered in the lee of the sea wall.

Away from the coast, the Basque Country identity becomes even more concentrated, as local traditions take centre stage. Every village square features a fronton, a high wall used in the sport of pelota, a game that exists in 20 different variations. An integral part of local life, pelota is played against the wall with a wooden bat, a wicker scoop or the bare hand. You’ll find indoor courts too, called trinquets, where players can also use one or more sidewalls.

Heading inland from Saint-Jean-de-Luz, I stop off at Ascain to visit the atelier and tempting factory shop of Basque linen manufacturer Lartigue 1910. Beyond lies Sare, one of four Basque Country villages classified amongst the elite band of Plus Beaux Villages de France, along with Ainhoa, La Bastide-Clairence and Saint-Jean-Pied-de-Port. 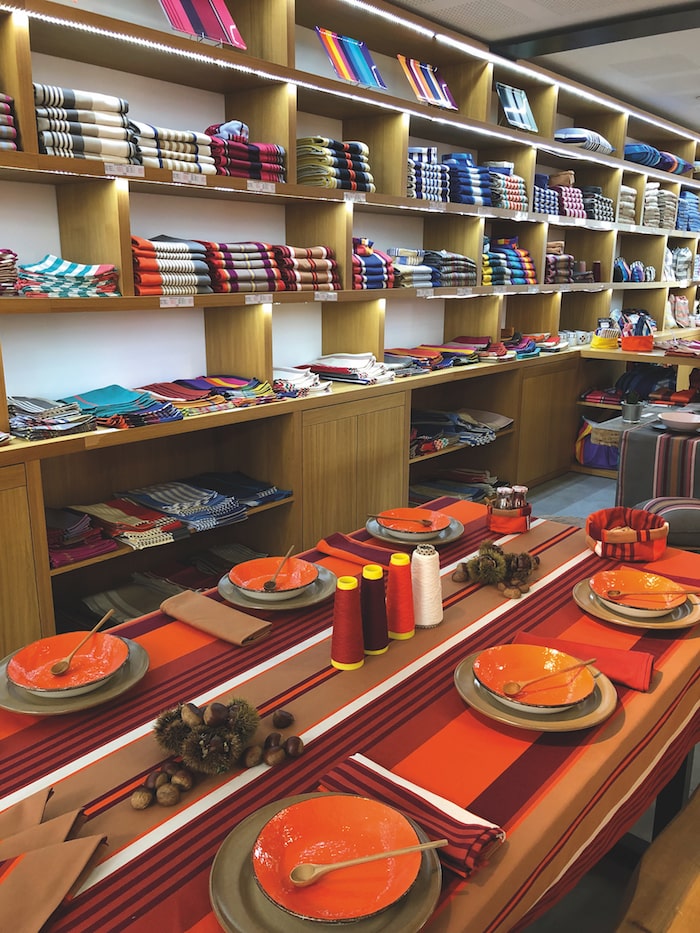 Artisanal items for sale in the shop at Lartigue.IMAGE © GILLIAN THORNTON

Explore underground at Les Grottes de Sare or take the cog railway to the top of La Rhune, the most westerly peak of the Pyrénées. Sare is quiet early on a September Tuesday, but neighbouring Ainhoa still buzzes with visitors and 21st-century traffic (a bit too hectic for my liking, but still worth a visit). Espelette is busy too, but in a bustling way that somehow adds to the atmosphere of this picturesque pepper-growing town. Stop at the new interpretation centre for the full story of how a Mexican chilli flourished in this warm, damp climate. Today it is France’s only AOC spice, and it is grown in 10 designated communes.

Close to Espelette, the spa waters of Cambo-les-Bains attract bathers for medical and wellbeing cures. Many more visit glorious Villa Arnaga, a neo-Basque house with 15 hectares of garden built for the playwright Edmond Rostand on the proceeds of his 1897 smash hit, Cyrano de Bergerac. It’s a theatrical experience in every sense. 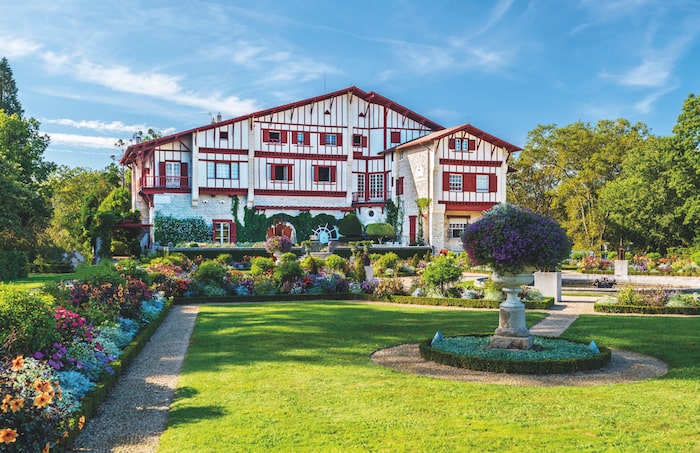 An overnight stay at Auberge Ostape on the hills above Bidarray, where 22 guest suites are located in five traditional villas set around a gastronomic restaurant and accessed by golf buggies, is a must. Expect outstanding views with cuisine to match and a private Porsche collection accessed under supervision!

Admire the huge glazed pots from local producer Goicoechea on Ostape’s panoramic terrace and drop in at their factory and huge showroom at nearby Ossès to find out more. If you’re travelling by car, leave a footwell free! In centuries past this was Hospitaller country, so I make my way to the small village of Irissarry to explore its impressive 17th-century Commanderie, now a community and exhibition centre. Today the area is home to the Irouléguy vineyards – mosey on over to the new visitor centre and shop on the outskirts of Saint-Étienne-de-Baïgorry. 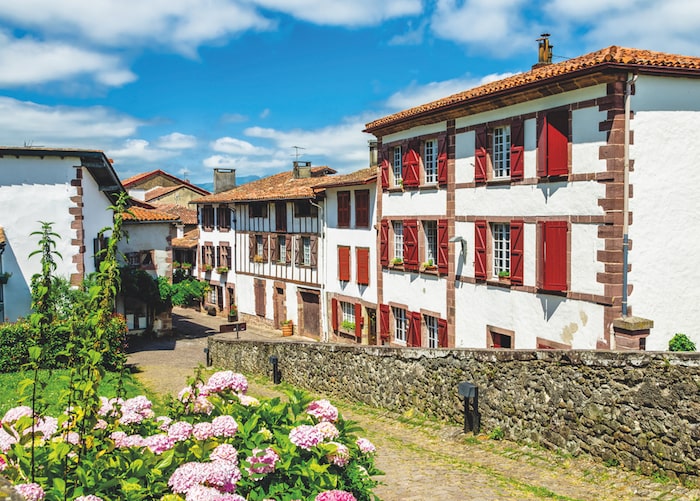 Saint-Jean-Pied-de-Port, one of the Plus Beaux Villages de France. IMAGE © SHUTTERSTOCK

For a different local product, hug the Spanish border and meander down the Vallée des Aldudes to the door of a Basque Country legend.

In the 1980s, Pierre Oteiza was instrumental in the revival of pig farming and the renowned AOC Kintoa ham and charcuterie. Sit down at the restaurant, meet the pie noir pigs on the farm trail, and buy edible souvenirs from the farm shop.

The final stop on my inland trail is Saint-Jean-Pied-de-Port – positively heaving with midweek pilgrims walking to Saint-Jacques-de-Compostelle, or Santiago de Compostela, as they call it in Spain. Spiritually motivated or not, don’t miss the chance to tread the cobbles up to the hilltop citadel for pretty façades, ancient buildings and panoramic views. After stopping overnight at the charming Maison Joangi, a maison d’hôtes run by former museums expert Jean Idiart, I head back to Bayonne. The city at the confluence of the Nive and Adour rivers was occupied and fortified by the Romans, and prospered under the English Plantagenet kings who ruled Aquitaine in the Middle Ages. 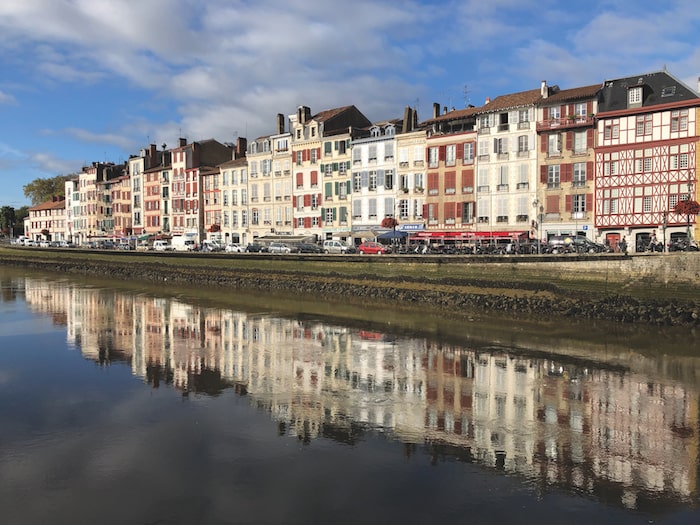 Today it is the capital of the French Basque Country, and split into three distinct areas, all within walking distance of each other. Pick up the free Best of Bayonne guide from the tourist office to explore on foot. Highlights include the Gothic cathedral and cloister, the 17th-century trinquet, the Musée Basque and the picturesque Nive quaysides and arcaded streets, which have the Saturday morning bonus of a riverside market.

And don’t leave Bayonne without sampling the city’s signature sweet and savoury products: delicious handmade chocolates and Bayonne cured ham. A real flavour of this unique country within a country. 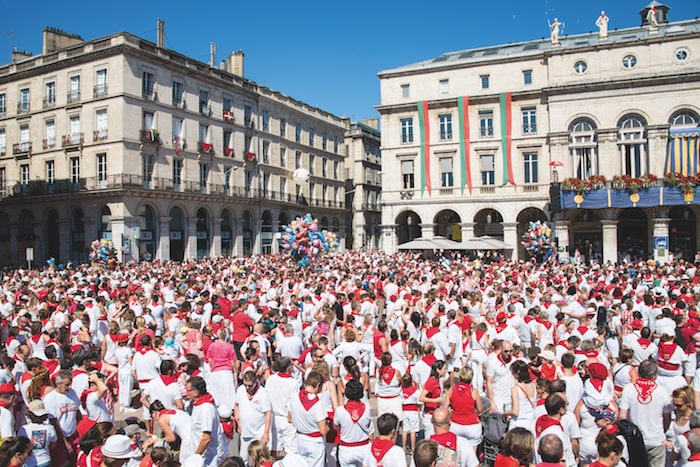 The Fêtes de Bayonne see pretty much everyone in the city dress up in red and white. IMAGE © SHUTTERSTOCK