In the Footsteps of Victor Hugo in Montreuil-sur-Mer 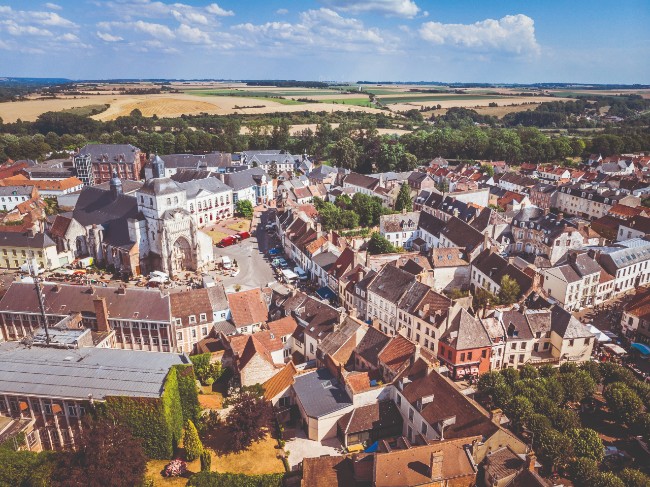 Buffeted by gales, hugging my flapping notebook for dear life, it doesn’t exactly take a leap of imagination to see how a wind-lashed Victor Hugo could have dreamt up Les Misérables (a fairly accurate depiction of my current state) trudging along Montreuil-sur-Mer’s ramparts.

Victor Hugo dreamt up part of the plot of Les Misérables as he wound his way round the citadel and its lofty ramparts. Photo: Yannick Cadart

Peering down the vertiginous drop, I can just about picture Jean Valjean clinging on like a limpet to the jagged citadel wall, making yet another break for freedom. This right here, gust and all, is the drama-fuelled stuff of epic novels.

As are the town’s meandering lanes, and tight rows of higgledy-piggledy maisonettes and discreetly charming hôtels particuliers. Fresh from his bracing recce round the citadel, the author moseyed on over to the ville haute for what would turn out to be quite the plot-rich stroll. Or so the story goes… 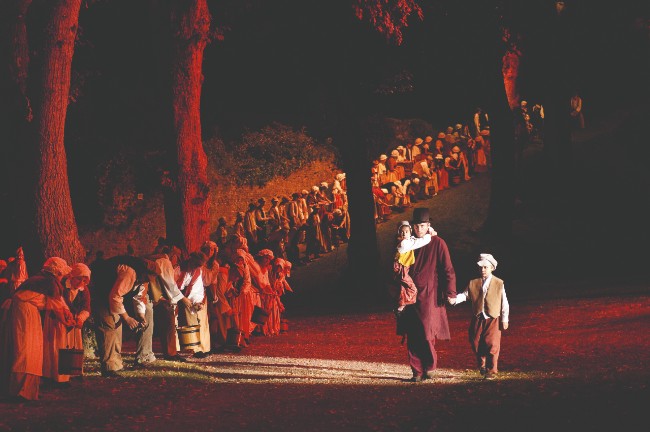 It’s during a spot of lunch at Le Relais du Roy that fateful September day in 1837 that Hugo reportedly crossed paths with a maid by the name of Cosette. Later that afternoon, slogging up the cobbled hill of the Cavée Saint-Firmin, he witnessed the coaching accident that would become a pivotal scene in Les Mis – as a selfless Valjean (by then living under an alias as mayor of Montreuil-sur-Mer) single-handedly rescues a man trapped beneath the wheels of his cart, thus revealing his true identity as an escaped convict to his nemesis Javert. According to local lore, he then spotted a red-eyed demoiselle emerging from the gloom of Saint-Saulve church, and Fantine was born. His action-packed day trip may have inspired him to pen his magnus opus but not to linger on Pas-de-Calais’s bracing shores – or lack thereof. The vexing absence of “mer” proved a sticking point. Like most visitors (guilty as charged) the wordsmith, voice of the oppressed and all-round dynamo, had expected, as advertised in the name, crystalline waters as far as the eye can see – his hike up the ramparts, it seems, was a last-ditch bid to spot the promised surf. Sadly, he was three centuries too late. 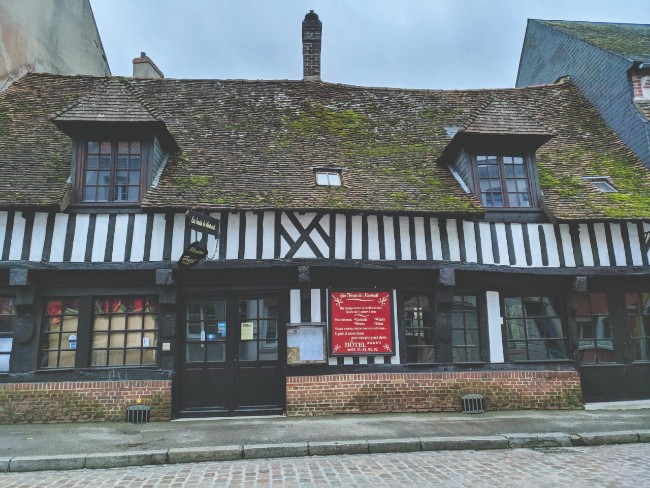 The town had once been a thriving port, hence the now-misleading moniker, but by the 1500s, the estuary had silted up, leaving Montreuil landlocked. In a letter to his wife (despite travelling in the company of one of his mistresses, he did spare a moment to keep his spouse abreast of his whereabouts), he moaned: “Montreuil-sur-Mer would be better named Montreuil-sur-Plaine”. Cosette, Fantine and co. taking root in his overactive mind, a miffed Hugo marched back to the Hôtel de France, cancelled his reservation for the night without explanation and hightailed it home. Not that the natives hold a grudge. These days, “birthplace of Les Misérables” is all too happy to overlook the slight. In fact, every summer, at the first embers of twilight, some 500 townsfolk dress up in period garb and make for the citadel that fired up his imagination to bring to life his tale of strife and drudgery – and all-too fleeting visit – in a spectacular light and sound show. A not-so veiled attempt to make him stay the night at long last? 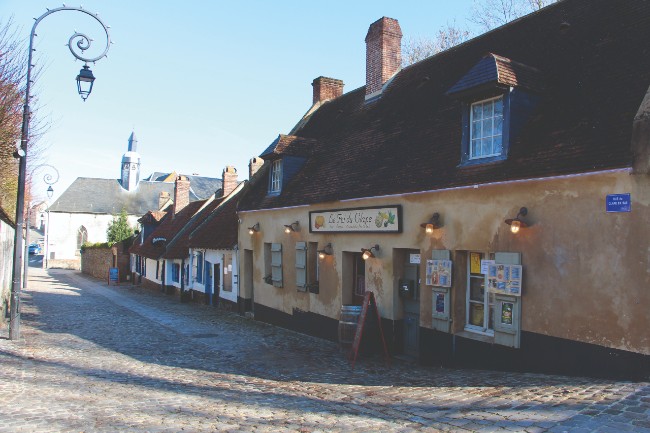 You might say Les Misérables was a rather apt title considering the citadel’s blood-splattered past, phalanx of ill-fated residents and forlorn inmates (real and imagined) – even prophetic, what with its central role as HQ to the British forces during the Great War and German stronghold in the Second World War. A royal castle-turned-military stronghold, it has borne witness to the sweep of French history and its share of intrigue too…

Legend has it that having fallen head over heels for the fair Bertrade of Montfort, the philandering King Philip I repudiated his queen, Bertha, and had her locked up in one of the towers (now renamed Tour de la Reine-Berthe in her memory) where she died of sorrow three years later in 1093. A juicy firecamp story for gullible backpackers – there is a hostel smack dab at the foot of the citadel – but total poppycock, my guide shrugs. As Berthe owned Montreuil, the likelihood of her being held captive on hometurf is slim to none. Besides, stones don’t lie: the tower wasn’t erected until long after her death, in the 14th century! 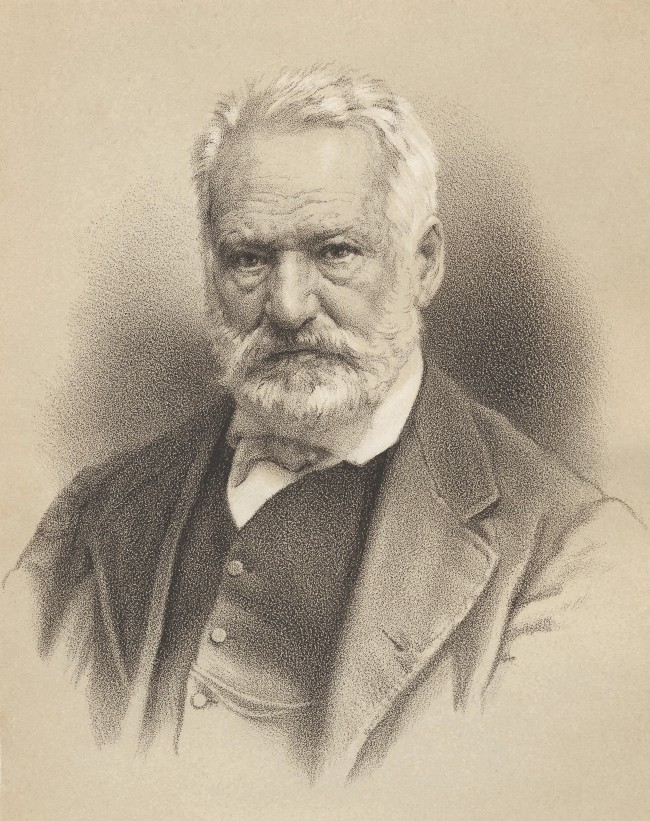 Jilted queens aside, a ragtag crew of warmongers left their (verified) mark on the castle, for better or worse. A dogged Charles V of Spain laid siege not once, not twice but three times to the château, until eventually it fell. Louis XIV later charged his military engineer and right-hand man Vauban with fortifying the rebuilt citadel. Although less than enthused by the task – Vauban deemed it too small, poorly conceived and best razed – under duress, the ‘King’s vagabond’ made a few grudging improvements.

Napoleon, his sight firmly set on conquering England (ideally by dropping assault troops over the Channel from hot air balloons!), posted tens of thousands of men at the stronghold before shelving first the balloons and then the invasion altogether.

Fast forward 100 years or so and it is here, within its impregnable fold, that the British Army installed its headquarters led by Field Marshal Douglas Haig – turning Montreuil into
the nerve centre of an immense logistics chain supplying troops, provisions and equipment from the ports of Boulogne, Calais and Dunkirk to the front in nearby Flanders, Artois and Somme. Despite the devastating reports from the front line, there were surprising moments of levity amid the carnage of the trench-bound stalemate. 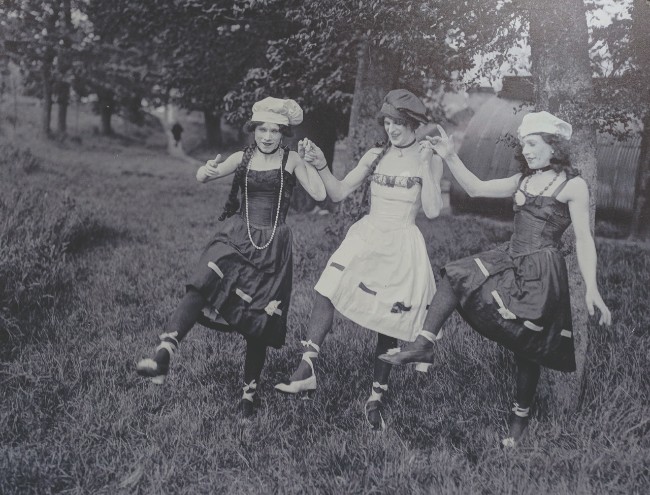 The Queerios, soldiers enjoying some downtime at the citadel

In fact, a truly extraordinary exhibition at the Maison du Tourisme shows never-before-seen photographs of soldiers larking around the citadel; chief among them am dram troupe The Queerios, skipping arm-in-arm in frilly frocks and beribboned courts to lift increasingly frayed spirits. Speaking of lifting the spirits, round off your visit with a tasting spree at Les Misérables artisanal chocolate shop across the street. Like Montreuil-sur-Mer, the sinfully indulgent chocolaterie doesn’t live up to its name – there is nothing remotely miserable here. And like the town that spawned it, it’s sure to blow you away. 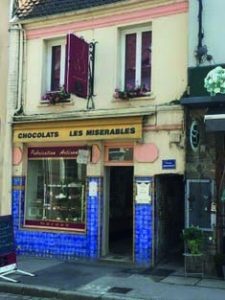 BY CAR: Travel by ferry from Dover to Calais. Montreuil is less than 1 hour 15 minutes away. www.poferriesoffers.co.uk

With 29 restaurants, cafés, wine bars and more dotted across town – one eatery per 79 inhabitants! – Montreuil-sur-Mer has earned its crown as the Côte d’Opale’s most bountiful foodie destination fair and square. Let’s dig in.

Montreuil’s answer to the capital’s edgy cantines, Anecdote is the latest venture of two-Michelin star chef Alexandre Gauthier, of La Grenouillère fame – and a chance to sample his award-winning fare at a fraction of cost. Opened in 2015 in the former Hôtel-Dieu hospital, the bistro revisits his father and feted chef Roland’s signature recipes with quite the contemporary twist. The desserts are simply to die for. Why not treat yourself to a Gauthier double-whammy and follow up a spot of lunch at Anecdote with an eight- or 11-course (if you dare) feast at La Grenouillère (€120 and €155 respectively)? 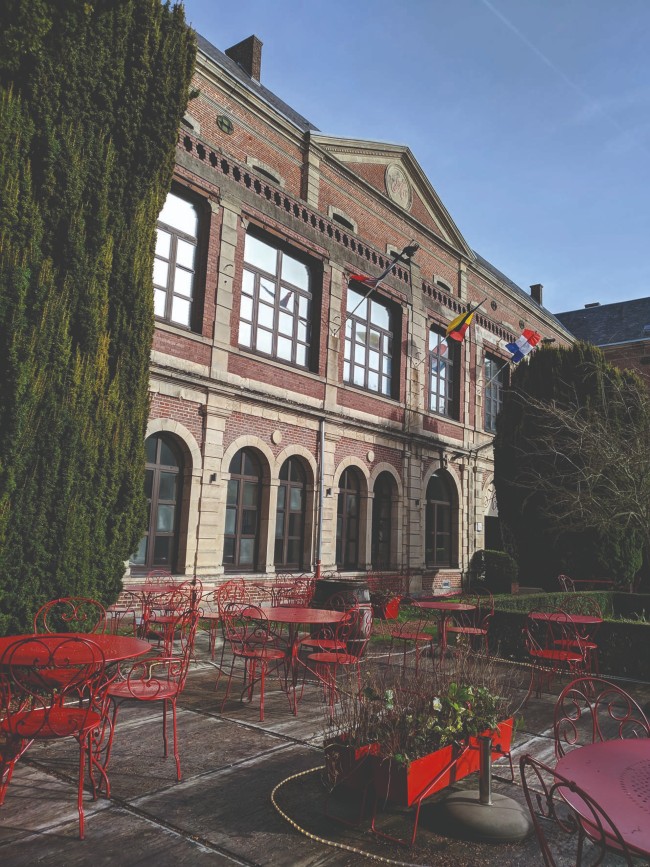 Helmed by Roux alumnus Christian Germain, the Château is the home of fine dining in Montreuil. Locally sourced, sinfully moreish with a presentation so painstakingly engineered (each morsel dovetailed like a scrummy jigsaw), every dish is almost too good to tuck into… almost. Spend the night – book the Tudor room – and top it all off with a breakfast of champions. This is no turn of phrase: only consummate chompers can dream of polishing off Germain’s spread of viennoiseries, crêpes, cheese, fruit and crisp baguettes. The light-footed waiter will sneak platter after platter of oven-fresh goodies onto your table until you come up for air and beg him to stop. 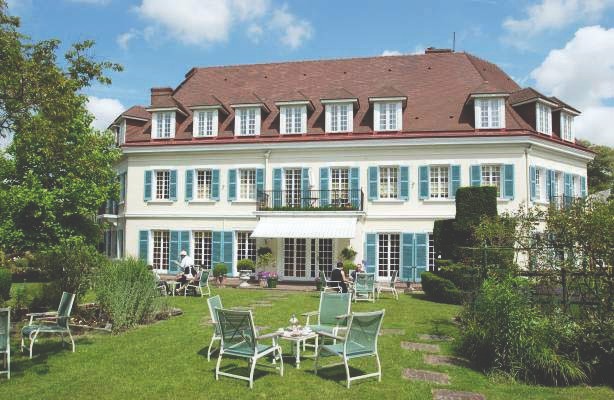 This is no bog-standard pick ‘n’ mix store. In fact, there isn’t much picking or mixing going on. Customers can usually be found huddled by the counter, salivating over Sabrina Leblond’s bonbon-based sculptures. From darling party favours to gravity-defying candy creations – among them a jumbo stadium and jukebox – there’s nothing this would-be Willy Wonka won’t sink her teeth into. Did we mention the majority of her sweets are 100 per cent natural? You’ll never want to touch preservative-plied supermarket gummies again. 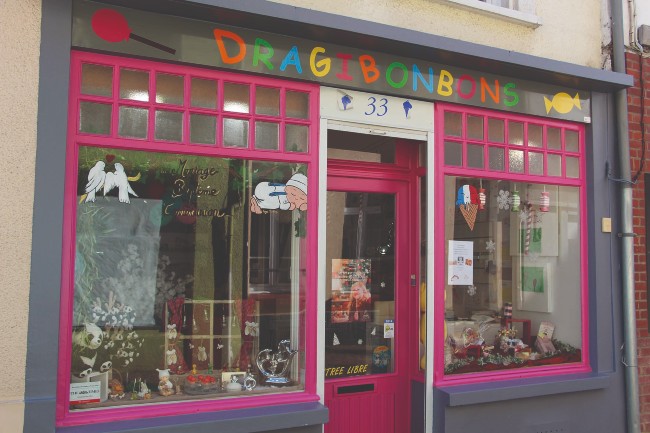 Follow your nose (or pinch it!) to the counter, past shelves groaning with the region’s prize stinkers and take a moment to watch owner and one-woman assembly line Ludivine Lefrançois in action. Grab cheese, slice, wrap and repeat – you won’t even see her dainty mitts move. Among the local specialities on offer are gooey Ch’ti à la bière and Boulette d’Avesnes – a cone-shaped chunk of Maroilles (voted one of the world’s smelliest cheeses!) coated in fiery paprika for that extra throat-scratching oomph. Even the natives steer well clear of that one. Ludivine will vacuum-pack it all for a pong-free (in theory – she is no miracle worker) homeward journey. 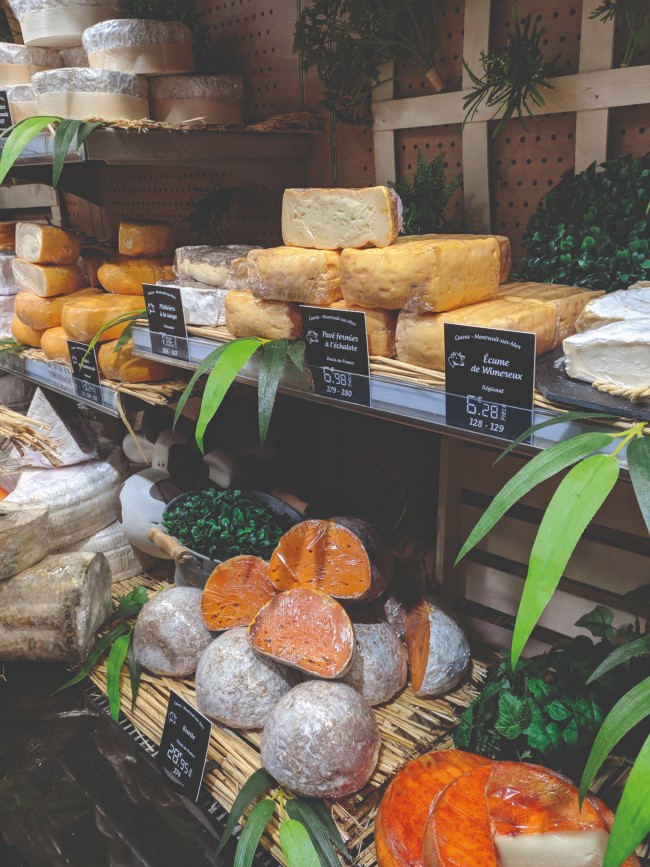 A Montreuil institution run by Franco-Australian duo Olivier and Belinda, it attracts oenophiles from miles around (the spirits and beer range is nothing to be sniffed at either). In fact, British wine lovers have been known to pop across the Channel with the sole purpose of stocking up at La Cave. Mosey on over to the shiny new tasting area for a vin mystère experience, which invites amateurs and connoisseurs alike to blind taste hand-picked vintages served in black tinted glasses. And gorge on a charcuterie board while you’re at it. 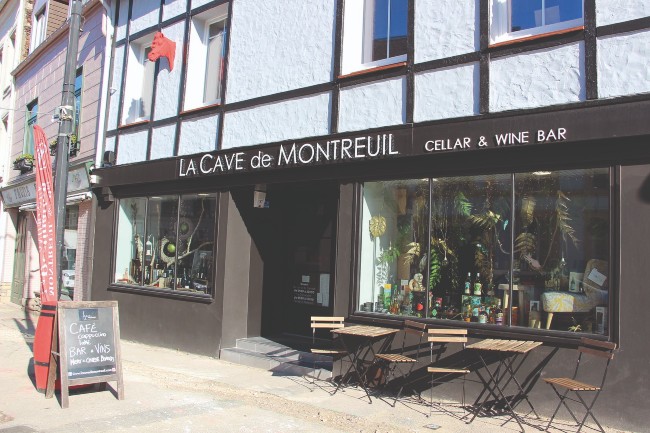