Legends and Traditions of Old Poitou-Charentes 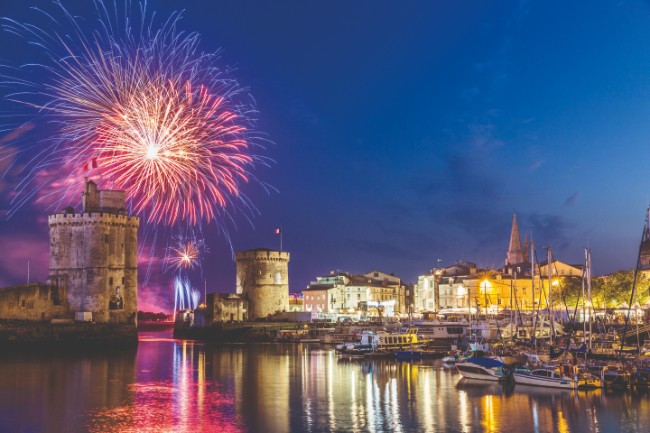 Mamie Madeleine poured generous glasses of épine, a homemade apéritif made from blackthorn leaves, while her sister Marie brought snacks from the kitchen. My husband and I had just returned from a year-long stint in Central America and we had popped by his uncle’s sheep farm in the Deux-Sèvres département for an apéro. (This is the same jovial tonton who orchestrated a blindfolded cheese-tasting test during my wedding reception, in order to prove my Frenchness. Thankfully, he had populated the cheese plate with easy-to-identify favourites like Comté, Camembert and, of course, the local goat’s cheese, Voeu du Poitou.) 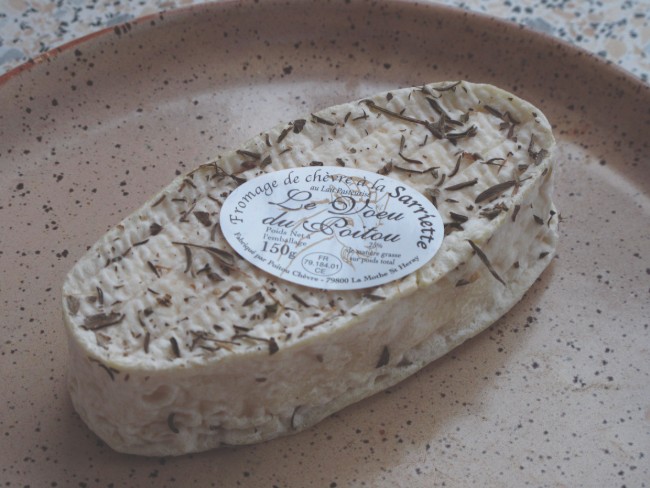 Seated at the farm table, his uncle’s mother and sister were wonderfully inquisitive. They wanted to know everything about the plant species that grew in those tropical lands, the abundant fruits plucked from trees, the flowers in the rainforest, the produce that was cultivated. This was the first time since our return that anyone had shown interest in this. And I was struck with awe and admiration: these mamies, who had never left their region of birth, understood more about the land in El Salvador than our cosmopolitan, travel-loving Parisian friends. Well into their 80s, the sisters worked their garden every day. They were deeply tied to the land.

Over the years my admiration would only grow for my French family’s profound ancestral roots, which went back centuries. They would even joke around in patois poitevin sometimes. But there is one thing they didn’t jest about: the local butter. Our friends in Normandy and Brittany may not agree, but the proof is in the pudding: Échiré butter is served in the best restaurants all around the world. 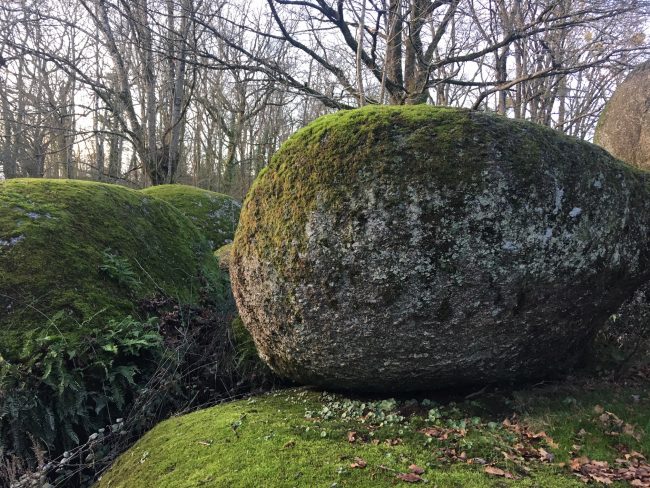 This part of western France is known as the Gâtine, meaning a land that is too poor for agriculture. Pocked with granite rocks and edged by bocage (hedgerows), the undulating fields are not planted with crops destined for the Rungis Market outside Paris. Instead, the area is known for animal husbandry.

That local goat’s cheese I mentioned? Apparently it’s a legacy of the legendary Battle of Poitiers in 732 AD, when Charles Martel’s Christian army defeated the invading Muslim forces under Abd er-Rahman. As the enemy retreated to Spain, they left behind their goats, which became an unexpected agricultural gift. At least, that’s how the story goes… 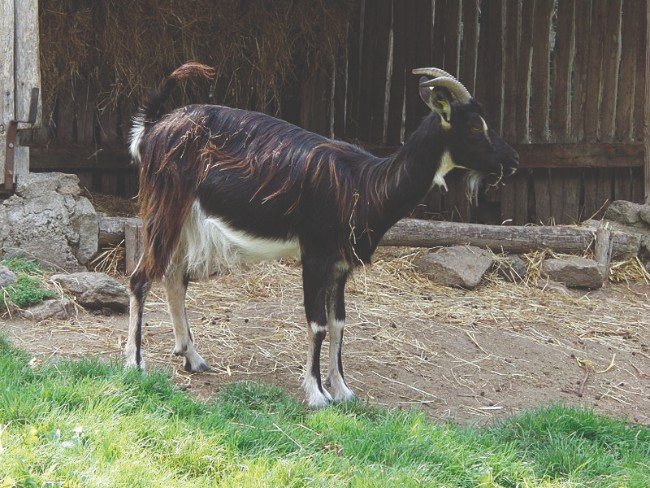 Legends abound here in the land of Eleanor of Aquitaine. Did you know that “the navel of the world” is located in the Gâtine? Pougne-Hérisson in the Deux-Sèvres département is the self-proclaimed nombril du monde, and it hosts a quirky eponymous festival every summer. It’s said that “all fairy tales and legends are born here, along with beautiful lies…” and visitors can dive into this imagination and whimsy in the Jardin des Histoires. 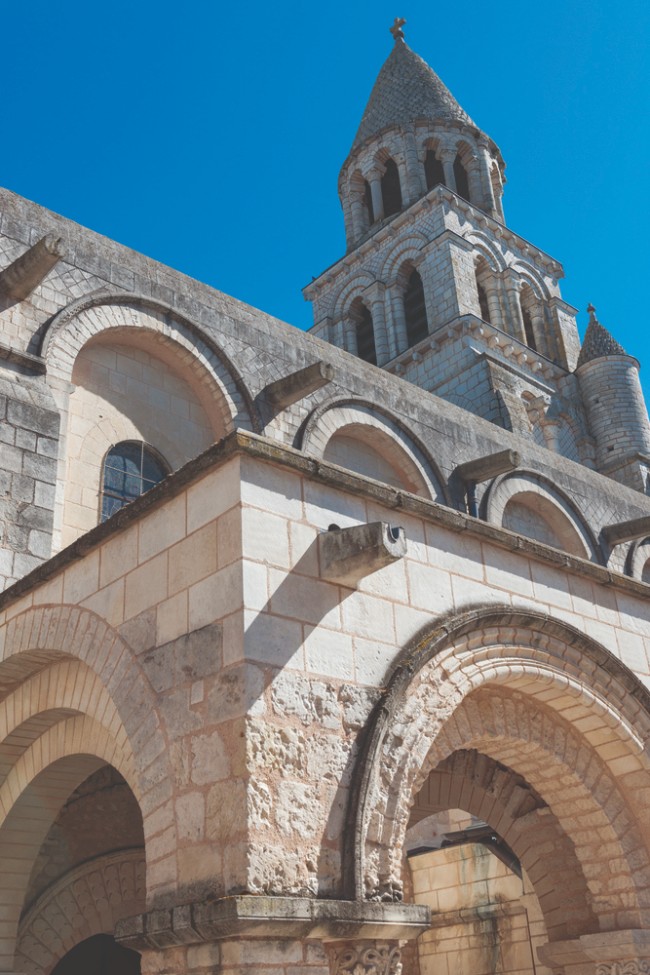 In the town of La Chapelle-Saint-Laurent, the Virgin Mary left footsteps in a boulder when she had a confrontation with the Devil. You can admire the pas de la Vierge, as many generations of pilgrims have, near the Notre-Dame-de-Pitié church. In the commune of Largeasse, the natural site of the Rocher Branlant is a mystical, almost sacred, place. As you roam the rock-strewn hillside, you can imagine ancient druids popping out from behind the moss-covered granite. It is said that the Rocher Branlant, which is precariously perched in perfect equilibrium atop another boulder, served as a Judgement Stone. (Try as we might to budge the stone into motion, it’s impossible… Judgement averted!) And in the ancient capital of Poitiers, legends are rife, particularly at the jewel-like Notre-Dame la Grande church, where in the summer months a stunning light show illuminates the 12th-century façade. 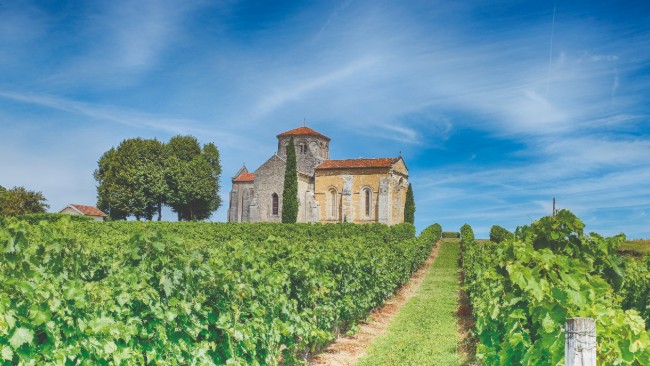 Many of the grapes grown in this part of the world will go to make Cognac. Photo: Shutterstock

This deep tie to the land is evident in neighbouring départements as well. Take for example the vineyards of Cognac. The grandes maisons, like Martell and Hennessy, may be renowned around the world (in fact most of the spirit is made for export), but it’s the thousands of individual viticulteurs who are responsible for the grapes used to create Cognac, and the apéritif known as Pineau des Charentes. For centuries these farmers have worked the land and they intimately understand its terroir. 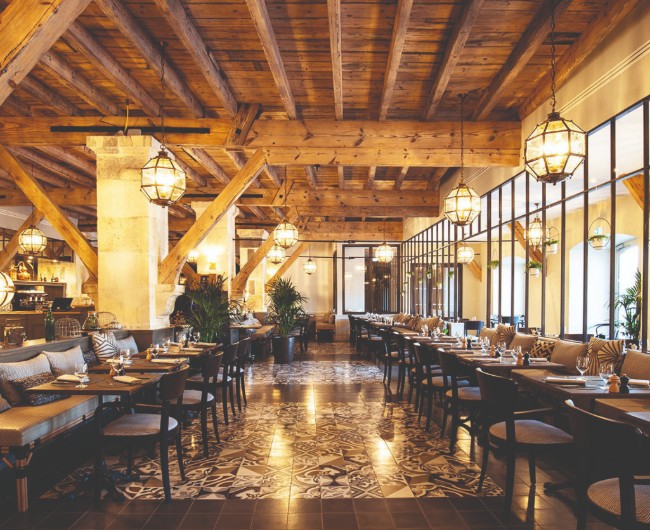 La Distillerie at Hotel Chais Monnet, a great place to enjoy the pleasures of Cognac

A great place to immerse yourself in the world of Cognac is at Chais Monnet. This five-star hotel is a destination itself, housed inside the former Cognac warehouses of Jean Monnet, nicknamed the ‘Father of Europe’. There’s a sublime spa and popular eateries, including a gastronomic restaurant by Michelin-starred chef Sébastien Broda. 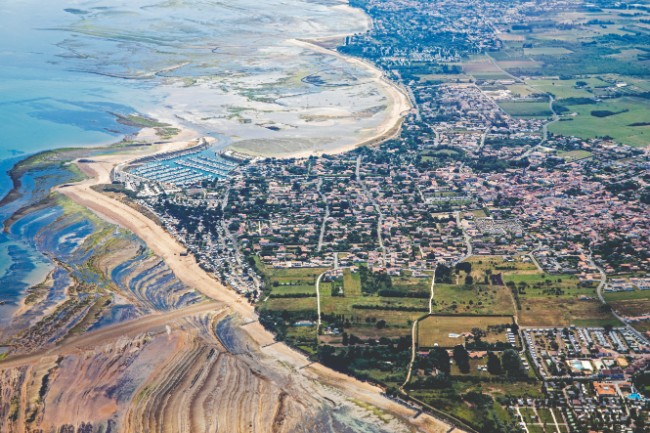 Oléron is Metropolitan France’s second largest island and the source of some of the world‘s best oysters. Photo: Shutterstock

Historically, ancient Poitou was merged with Charente and Charente-Maritime to create an administrative region called Poitou-Charentes. In January 2016, the three former regions of Limousin, Aquitaine and Poitou-Charentes were absorbed into the mega-region of Nouvelle-Aquitaine. Despite the merger, the former region has maintained a strong sense of identity. 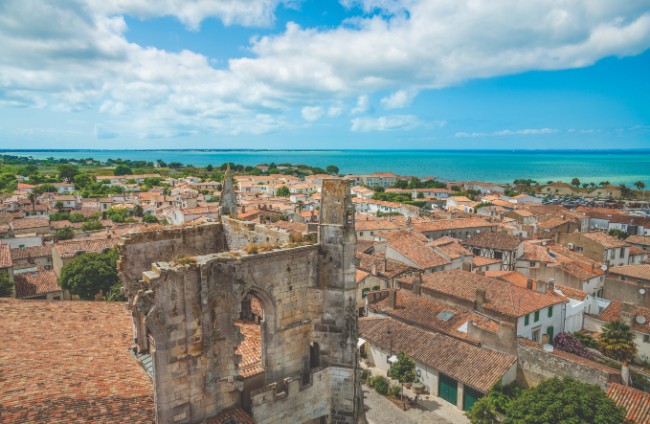 Coastal Charente-Maritime is steeped in maritime culture and tradition. Oyster farmers on the island of Oléron produce some of the finest briny bivalves in the world, while the sauniers on Île de Ré follow centuries of tradition as they harvest, by hand, the fleur de sel so appreciated by the world’s top chefs. My affection for my adopted French region has only grown over the years, thanks to its fine gastronomy (bring on the multi-course Christmas feasts!) and family vacations. 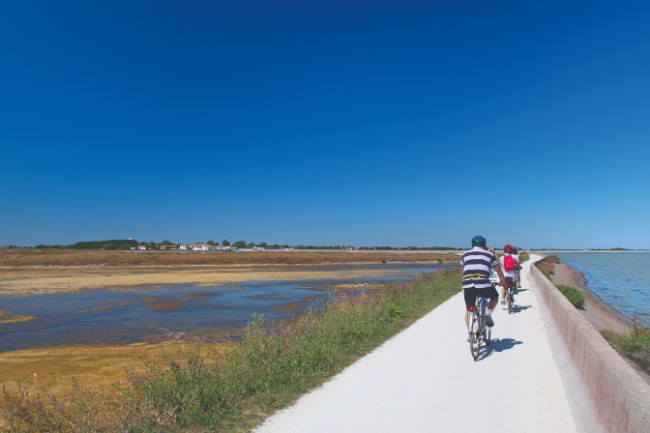 In La Rochelle, we’ve climbed the ancient towers of the Old Port, marvelled at the Aquarium, and tucked into seafood so fresh I imagined it swimming minutes before. In Rochefort, we’ve watched the construction of the Hermione, the magnificent replica of the frigate Lafayette sailed to the New World. Built using only materials and methods from the 18th century, the replica ship made a successful transatlantic voyage in 2015, and continues to make calls in ports around the world. In Melle, we’ve gaped at the sculptures in the Romanesque church of Saint-Hilaire, a UNESCO-listed site on the Santiago de Compostela pilgrimage route. 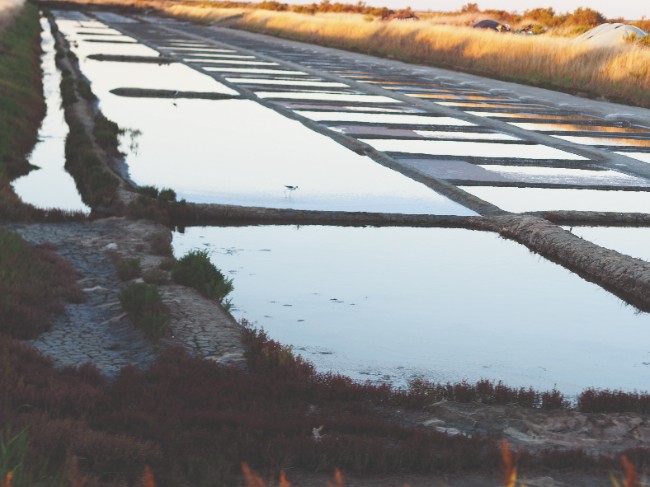 Some of the most memorable holidays we have had have been when we’ve transplanted the extended family to the islands of Charente-Maritime. This stretch of France’s Atlantic coast soaks up the sunshine for more than 300 days of the year. 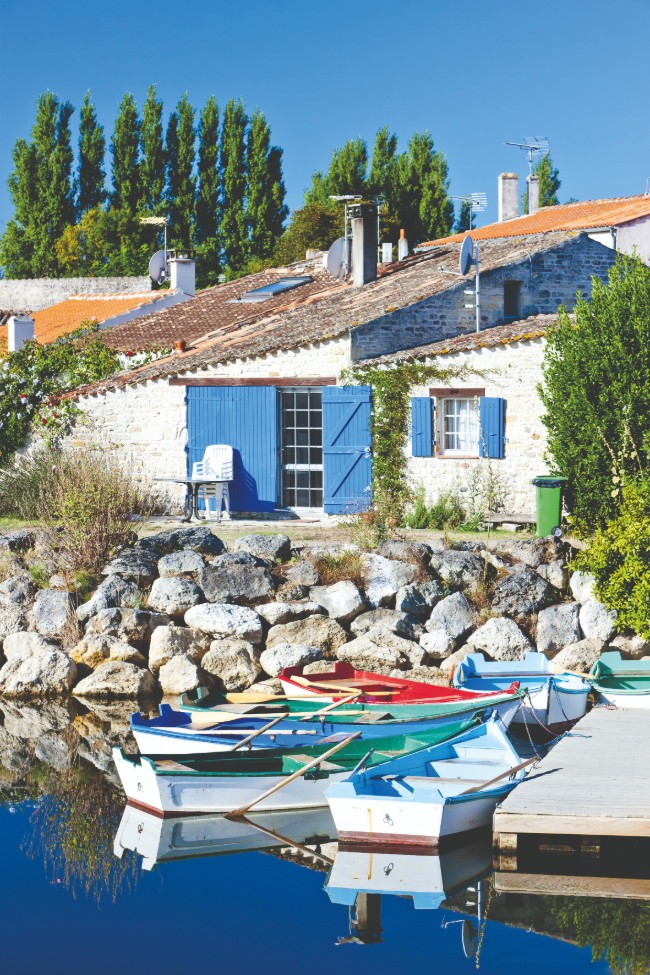 The Île d’Aix is completely car-free, and its flower-dotted fields, vineyards and beaches are best accessed by vélo. Bicycle is also the best way to explore the Île de Ré, which is threaded with cycling paths next to salt marshes, sandy stretches of beach, and picturesque white-washed villages like Ars-en-Ré, classified amongst the ‘Plus beaux villages de France‘. The island of Oléron is much bigger (it’s the largest in France, after Corsica) and is a playground for adults and children alike. 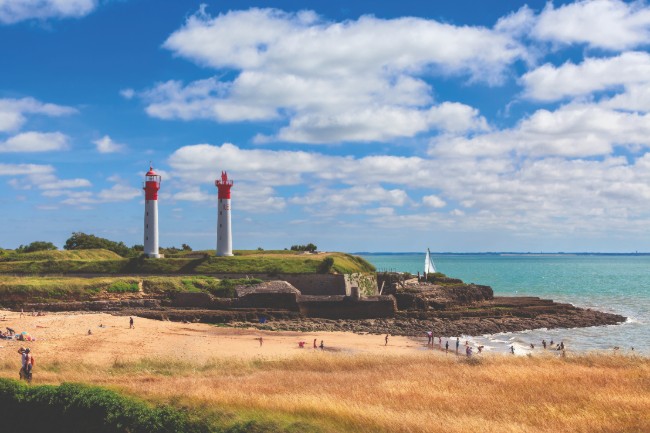 It is not as famous, nor anywhere near as big as Île de Ré, but Île d’Aix is another popular destination
for summer tourists. Photo: Shutterstock

We also enjoy taking rides in flat-bottomed boats through the canals of the Marais Poitevin, known as the ‘Green Venice’. Starting in the 10th century, medieval monks constructed dikes and carved out waterways. Today, France’s largest wetland is still home to a traditional pastoral culture that celebrates the life aquatic. 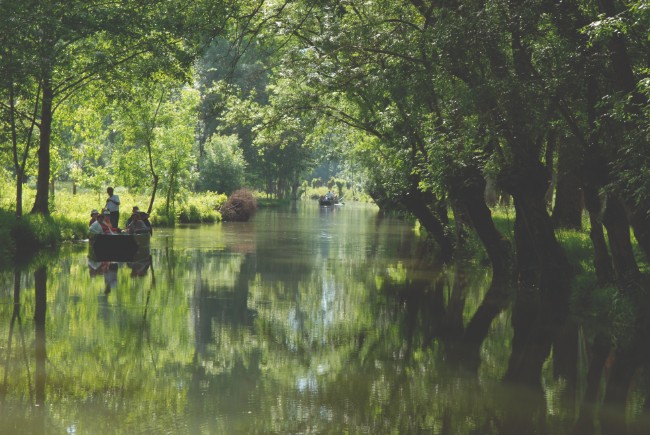 Just outside Poitiers, Futuroscope is a favourite destination for French families, who make pilgrimages from all over the Hexagon to partake in the fun. The theme park’s attractions and 3D films have an educational component, plus there’s live entertainment like magic shows, acrobats, and evening performances by the Cirque du Soleil.

Some of the most popular attractions include the Racing Experience with Sébastien Loeb (don a virtual reality helmet with the nine-time World Rally Champion) and Dance with Robots (the soundtrack is by famous DJ Martin Solveig). But we can’t help but laugh at the silly Lapins crétins cartoon characters, whose ‘Time Machine’ is a slapstick, sensory ride. 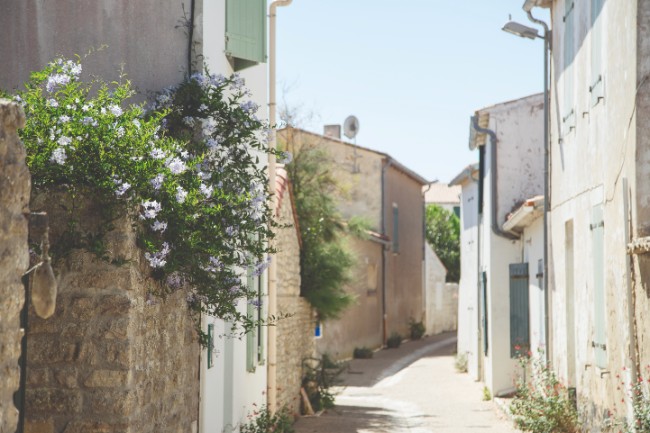 Most recently, the Romanesque city of Angoulême was a delightful discovery. On a visit just before New Year’s Eve, we followed the ‘cartoon trail’ through the alleyways, seeking out enormous painted murals on the wall. (Download the app and it’s like a treasure hunt.) Angoulême is famous for its annual bande dessinée (comic strip) festival, and the city’s dedicated museum stages fantastic temporary exhibitions exploring the history and cultural impact of cartoons. On our visit, the expo looked at the work of René Goscinny, the creator of Astérix and Lucky Luke, and the beloved comics’ adaptation to film. Unbeknown to us, director Wes Anderson was using the capital of bande dessinée as a film set at the same time. When the movie hits the silver screen, the cat will be out of the bag about Angoulême’s copious charms.

But for now, I can still relish the secret splendour of the region in all its uncrowded glory. 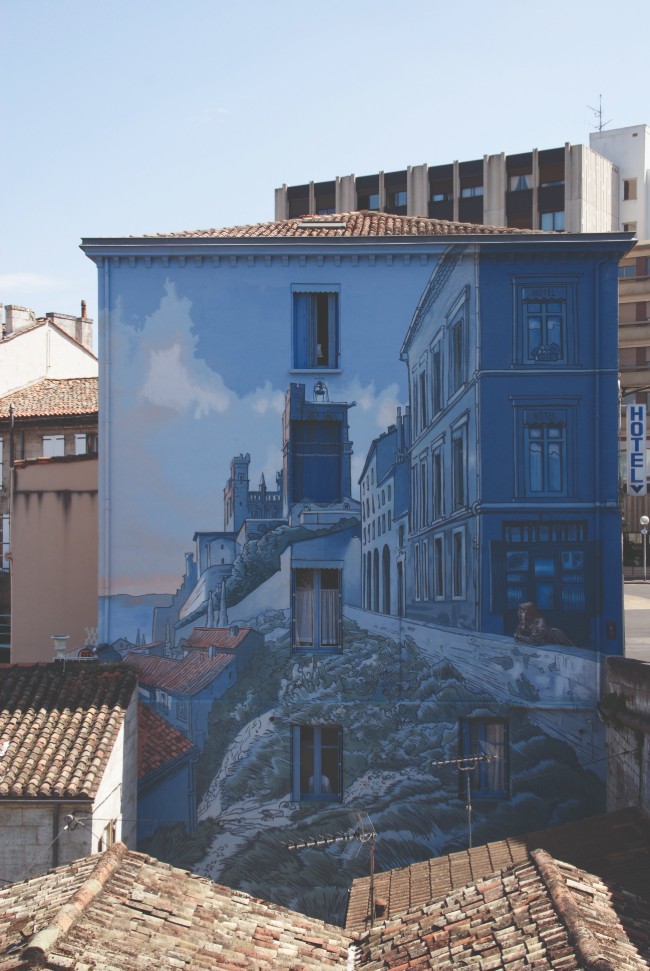 SIDEBAR: ‘KNIGHTS AND LADIES’ UNITE TO BUY A FRENCH CASTLE

An unusual crowdfunding campaign made headlines around the world last Christmas. The Château de l’Ébaupinay, a crumbling 15th-century castle at Le Breuil-sous-Argenton in the département of Deux-Sèvres, was saved from ruin by Dartagnans, a company founded by Romain Delaume to buy and restore historic monuments. Nearly 11,000 people from 96 countries stepped up to become ‘knights’ of the castle. Every share cost €50 and each co-owner received a free pass to the château for their lifetime. This successful mission followed Dartagnans’s rescue of the Château de la Mothe-Chandeniers in the Vienne département the previous year. For more information about Dartagnans’s projects, visit www.dartagnans.fr 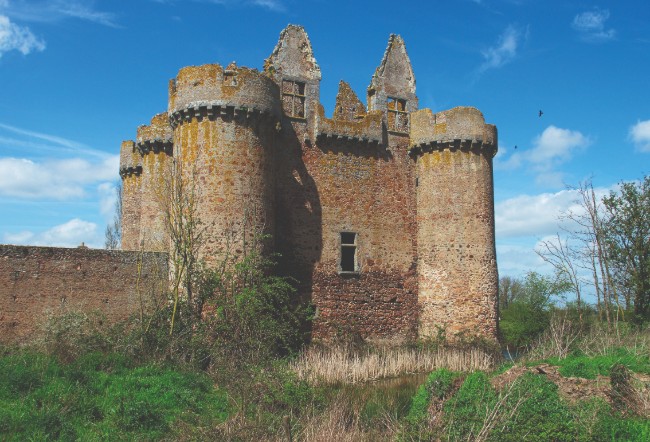