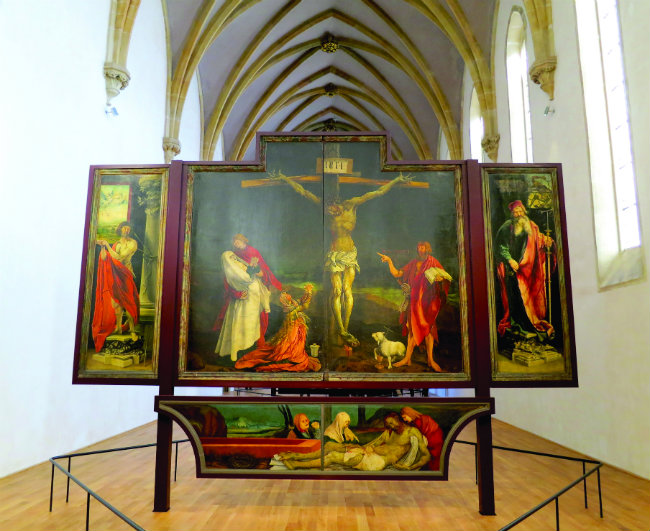 What do you get when you combine one of France’s finest museums with the trailblazing architects Herzog and de Meuron? A tremendous achievement and a deserving repository for the treasures it contains. The jewel in the crown of the Unterlinden Museum’s collection, the Issenheim Altarpiece, is now displayed as never before, in a showcase worthy of this supreme cultural icon.

During the reopening ceremony in January, French President François Hollande, speaking of the creators of the Issenheim Altarpiece, said, “The traces they left still grips us today. The altarpiece belongs to the heritage of humanity. With this work the Unterlinden Museum becomes a place of pilgrimage for culture, beauty and emotion”.

“One of a handful of the greatest works of Western art,” said New York Times art critic Michael Kimmelman, “An icon of Western civilisation like Leonardo da Vinci’s Mona Lisa or Michelangelo’s Sistine Chapel,” wrote Stanley Meisler for Smithsonian magazine. The altarpiece, created by Matthias Grünewald and Nicolas de Haguenau in 1512-1516, is clearly regarded by scholars and critics as a truly sublime artistic creation. The piece is a series of connected painted wood panels which each show a different scene depending on how many panels were opened: the Annunciation, the Nativity, the Resurrection, and a terrifying Crucifixion.

The new layout of the museum makes the visit more fluid and brighter. The conversion of the former municipal baths enables the exhibition of incredible artwork that had been in storage up until now, with the addition of an inviting café/restaurant. The underground gallery that connects the old chapel and cloister to the new wing tells the story of the museum, and the two floors of the new space display art from the 19th century to the present day, with a third floor reserved for temporary exhibitions and events.

Shaped by its prestigious past and brimming with culture, the Alsace commune of Colmar has successfully preserved and enhanced its relationship with its artistic heritage. It’s just one more reason to visit this beautiful town and to explore Alsace and its famed wine route.

Musée Unterlinden, Colmar, Haut-Rhin, Grand-Est. Open 10 am-6 pm on Mondays and Wednesdays, 10 am- 8 pm on Thursdays, and 10 am-6 pm Fridays-Sundays. Closed Tuesdays. The full ticket price is 13 euros.

Previous Article ​​Moneycorp can help clients in all 50 US States
Next Article Château de Cambes: A Lovely B&B Near Agen