My Life in Provence: The Real Luberon 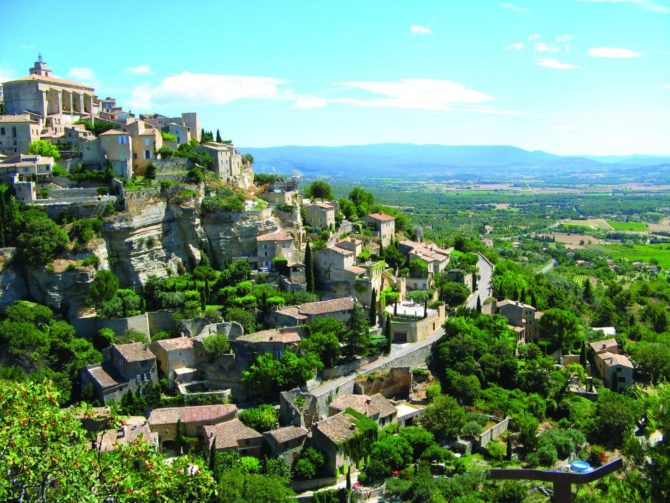 Before we moved to France I had read Peter Mayle’s account of his idyllic year in the Luberon, and thoroughly enjoyed it. However, when planning our great escape from grey-skied London, we never contemplated moving to the Luberon. Somehow it all seemed too much of a trodden path and a brief summer visit to two of its best-known villages, Gordes and Roussillon, had confirmed our prejudice. Although the Luberon’s villages and countryside were breathtaking, its eternally blue skies appealing, and the incessant supply of delicious food tempting, we decided it was too touristy for us and had “clearly lost its authenticity”. We were looking for La France profonde and the Luberon wouldn’t do, we announced smugly. Instead, we setted in beautiful Quercy, in the south-west, where we were very happy.

Several years later, work in Aix-en-Provence compelled me to take a closer look at the Luberon, and I quickly realised just how limited our preconceived ideas about the area were. My work there has given me the opportunity to truly get to know the medieval villages and hamlets, hills and valleys of what’s now my favourite corner of France. Just as Elizabeth Bennet overcame her prejudice and discovered the real Mr Darcy, I fell in love with the Luberon.

There’s much confusion about what actually constitutes the Luberon. For many it’s the ‘golden triangle’ formed by Gordes, Bonnieux and Ménerbes; that was, after all, the area originally discovered in the 1960s by Parisians looking for unspoilt countryside, superb climate and obligingly rustic locals. But the term Luberon also refers to the 300km2 Massif du Luberon, composed of Le Petit Luberon, Le Grand Luberon and the much smaller Luberon Oriental.

There’s also the Parc Naturel Regional du Luberon, a much broader region that started small in 1977 and now includes 85 villages – between Cavaillon in the west and Manosque in the east, from the Durance river in the south to the Monts de Vaucluse in the north. In 1997 UNESCO awarded the area “biosphere reserve” status to help safeguard the Luberon’s cultural heritage, which dates back to prehistoric times, and maintain its agricultural activities and diverse fauna and flora. This part of France has more than its fair share of heritage to protect. In addition to its unique ecosystem and stunning landscape, the region is rich in classified monuments, ancient towns and villages, medieval farmhouses, manor houses, churches and fountains.

The Luberon’s population declined during the early 20th century but, ironically, this protected much of its characteristic charm. When it was “rediscovered”, the area’s proximity to Aix, Avignon and Marseille made it easily accessible to the Parisians and foreigners who were keen to restore crumbling stone farmhouses and village manoirs using traditional techniques and materials.

As a result, and with development restrictions put in place early on, the Luberon’s villages, farmhouses, vineyards and farmers’ markets have survived and enjoyed a renaissance. The bakeries, restaurants and cafes have not closed or been ‘spoiled’. They’ve simply acquired the occasional upscale boutique or Michelin-starred restaurant as a neighbour. Yes, some villages get crowded in summer but if that’s the price of preserving this beautiful part of France’s unique charm and authentic way of life then, as far as I’m concerned, it’s a price worth paying.

Sophia van Woensel-Mose left behind life as an international corporate lawyer in 2005 when she moved from London to the south of France with her family. She lives in Aix-en-Provence and runs Provence Search, a property search company covering the Aix-en-Provence area, Avignon, the Alpilles, and the Luberon.

Want to discover the real Provence? Join France Today on our authentic yet intimate tours of Provence