Provence Travel: Why is Roussillon “Red”? Fact and Fable 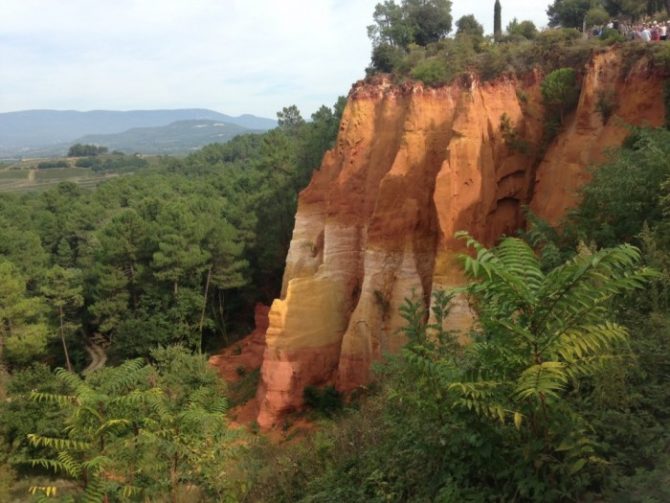 The French commune of Roussillon is located in the Provence-Alpes-Côte d’Azur, roughly midway between Avignon and Aix-en-Provence. It is in the heart of one of the biggest ochre deposits in the world–one that extends from Apt to Roussillon via Gargas and Rustrel.

Ochre deposits lend a natural reddish-brown hue to the village of Roussillon, giving the entire area the nickname the “Colorado Provençal”. In Roussillon the ochre-colored facades of the houses vary from light yellow to dark red. Set off by the brightly painted shutters and doors, these houses form a striking contrast against lush green pine trees. To many, Roussillon is one the most beautiful villages in France.

The History of Ochre

Millions of years ago, Roussillon was covered by the sea. When the waters dried up, only ochre-bearing limestone hills remained. Like today, stone formations were stained with coloured clays in every conceivable iron oxide pigment — from yellow to purple. Ochres, the colored clays found as a soft deposit, were intermingled with pockets of harder crystalline iron ore, in fairly even horizontal layers, of variable thicknesses.

Fast-forward to 300,000 years ago, when man discovered ochre. He used the natural pigment with indelible color to embellish the caves he inhabited. Since then ochre has been a coloration for everything from cave paintings to pottery to body paint to tattoos. Proof lies in some French burial sites from 200,000 years ago. They have red ochre floors that are eight inches thick. Skeletons found at the sites, sprinkled with red powder, makes researchers wonder if the powder was remnants of tattoos, applied as funeral rites, or if it was used, perhaps, to mask the odor of death. In any case, only skeletons and the red ochre pigment remain.

Around the time of the French Revolution, the demand for ochre was at an all-time high, due mostly to the textile industry. The industrial process for making ochre pigment was developed by the French scientist Jean-Étienne Astier from Roussillon. He invented a way to make the pigment on a large scale.

Mining ochres in Roussillon intensified. As many as seventeen different shades of dye were manufactured from the local rock. By the end of the 19th century, ochre from Roussillon was exported all over the world. It was used for artists paints and house paints; it also became an important ingredient for the early rubber, linoleum, paper, and cardboard industries.

Ochre supported the economic base of Roussillon until shortly after World War II, even though mining stopped in the 1930s to protect the sites from degradation or even complete destruction. The economic crisis of 1929 didn’t help either. Foreign markets closed down one by one. The industry suffered another hit in the 1950s. The introduction of synthetic pigments sent the industry into a downward spiral. Mass production of ochre finally stopped in the village in 1958.

Ochre is enjoying a much deserved revival today, although only one company in the area still operates. Still, visitors to Roussillon can walk along the footpath of the Sentier des Ocres and appreciate the beauty of the ochre cliffs. You can tour the site of one of the factories that fell into disuse and over fifty years ago and closed for production. It now operates as the Conservatoire des Ocres et des Pigments Appliqués where tours and lectures are offered to help preserve the important history of ochre in the region.

Why is Roussillon “Red”? The Fable

For those who want to know the real* story …

Once upon a time there was a lovely young damsel named Sermonde. She was married to the Lord of Roussillon, Raymond d’Avignon. Like many Medieval lords, Raymond loved to hunt. He’d spend weeks on end with his men friends killing wild animals for sport and trophies. He was absent from the chateau so much, in fact, that Lady Sermonde grew sad and lonely.

She began going out to the local nightspots with her Lady friends.

One night out on the town, Sermonde met a handsome young troubadour named Guillaume. They fell in love instantly. Soon the Lady and her troubadour were involved in a torrid affair.

Everyone in the village knew of the tryst between the Lady and the troubadour. They also knew that when Lord Raymond found out, he would make the couple pay dearly.

Rather than confront her, Lord Raymond suggested Sermonde invite her new friend, Guillaume, over to the chateau for a drink. Pretending to enjoy Guillaume’s company, Lord Raymond asked the troubadour to join him on a hunt the next day.

Thinking the Lord knew nothing of his Lady’s affair, Guillaume graciously accepted the invitation. The two men left the next morning, guns in hand.

In the early afternoon Lord Raymond returned to the chateau. Alone.

“Where is Guillame, the troubadour?” Lady Sermonde said, greeting her husband at the door.

With that, Lord Raymond turned around and headed for the kitchen. He often prepared meals that featured the spoils of his hunts.

When day turned to dusk, Lady Sermonde left her boudoir and walked downstairs to the dining room. Expecting to see her lover, Guillaume, waiting for her, she was surprised to see only her husband, Lord Raymond.

“You were expecting your friend, Guillame?” the Lord asked slyly. “He’ll be here any moment,” he said. “Let’s be seated.”

“I’m certain Guillame won’t be upset if we start,” said Lord Raymond, politely as he led Sermonde to her place at the table. He returned to his seat opposite hers and began carving the main course.

With great pride, Lord Raymond presented his wife a plate filled with his day’s bounty. “Here, my Love,” he proclaimed. “Enjoy!”

Lady Sermonde took a bite of her dinner, then another. Realizing that the meal served to her had an unusual taste and texture, she remarked: “My dear Lord Raymond, this is a most uncommon creature, is it not? Have you found a new type beast to bring to our table?” she asked.

“Yes, indeed,” said the Lord gleefully; “I hope you like it, my dear.”

“It is a pity our friend Guillame could not be here to enjoy this delightful meal with us,” stated Lady Sermonde.

“Au contraire,” Lord Raymond chirped. “He is here … “he chimed. “Guillaume is the main attraction, the main course.”

Lady Sermonde dropped her fork. Her mouth flew wide open. She screamed. Her screams filled the room, the chateau, and soon, the village. Before the Lord or servants could catch her, Sermonde ran to the top of the chateau’s highest tower; she threw open the window; and she jumped.

Down her blood flowed, onto the hills, into the valley below. Lady Sermonde’s blood colored the earth around Roussillon. Forever and today.

The Barefoot Blogger, aka Deborah Bine, loves to share tales of her solo life in France as an American expat who speaks no French. Retired from a career in advertising and marketing communications, and divorced after a 40-year marriage with children, Deborah left Beaufort, South Carolina and all of her belongings to move to the south of France. Now that she has found her “bliss,” her passion is to encourage others to break away from whatever is holding them back and to go after their dreams. “We’re on life’s journey alone. Be certain you love where you are.”

Previous Article 10 reasons to visit Rennes in Brittany
Next Article Take a Boat in Bordeaux: CroisiEurope’s Perfect Pairing of Food, Wine and Culture