Sète: The Venice of Languedoc 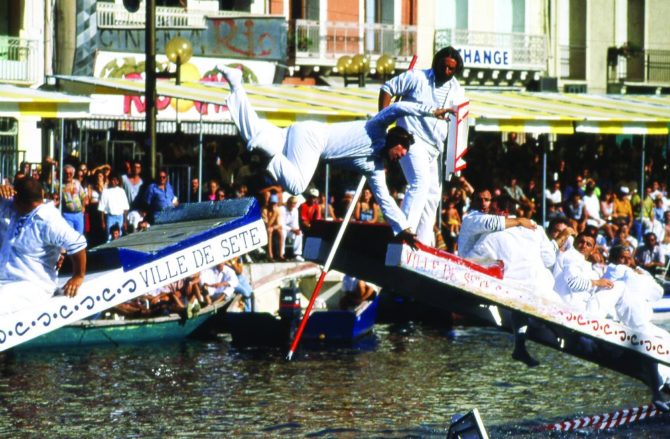 Wandering along the bustling Canal Royale towards Le Mole St Louis, a long stone jetty where I have a rendezvous with my guide, I can already sense the atmosphere of this busy Mediterranean port. Fishing boats of all shapes and sizes are docked on every available berth in front of the colour-washed waterfront houses. Doughty bateaux de pêche lie alongside impressive deep-sea trawlers, all of them creating unique reflections in the glossy water of the canal. Some are busy offloading the night’s catch, and local shoppers examine the packed crates with practised nonchalance, haggling over the price of their supper.

As with any vibrant port, Sète boasts a seemingly chaotic dockside, strewn with colourful ropes and lines, old marker buoys and rusty machinery. And because this is still very much a busy working environment, here and there linger a few old eccentric maritime characters, stretching their limbs in the Spring sunshine and muttering quietly to themselves. Meanwhile, the local restaurateurs are washing down their porches and tidying quayside tables ready for le midi, when locals and visitors alike will descend, to enjoy some of the freshest seafood on the Med.

Arnaud, my guide, is an exuberant Sètois and he proves a good companion as we discover some of the history and highlights of his hometown. I drove into Sète on a dark and rainy evening, through some unprepossessing industrial zones. Consequently, the following morning it comes as a surprise to learn that, during the Middle Ages, this was once a little fishing port set on an island, one of many dotted among the salty étangs – natural salt water ponds, lakes and lagoons – which run along this coast, all the way from the Rhône Valley to the Pyrénées.

After the night’s rain, the air is exceptionally crystalline and as Arnaud and I stand on the wooded hilltop of the Mont St Clair, admiring the view, it all becomes clear – Sète holds a prize position as it is linked to the mainland on one side and to the vast Étang de Thau on the other. Today the salty water of Étang de Thau is dark blue-grey and, in contrast, the great Mediterranean Sea outside these natural lakes is azure, reflecting the open skies. Extraordinarily, to the East we can clearly see the snow-capped Canigou mountain, the gatekeeper to the Pyrénées, over 200 km away.

It is also worth taking a stroll up the steps on the city side of the Mont St Clair, to gain a panoramic view of Sète’s terracotta roofs, which are interlaced by its network of canals and bridges. This vantage point reveals why some people have called Sète ‘the Venice of the Languedoc’.

Being labelled the ‘Venice of…’ must be a mixed blessing, for how can anywhere truly compare to the original beauty of Venezia? However, I later discover that Sète has at least two Italian connections. Firstly, like Venice, its network of canals is at the heart of the city. During the reign of Louis XIV, the fabled ‘Sun King’, Sète became the Mediterranean home of the royal fleet. Work started on Sète’s jetty and Canal Royale in 1666, and in 1673 the town was blessed with a royal decree.

Then, seeking to establish a safer route for his ships, Louis revived the ancient dream of having a canal that would link the Atlantic to the Mediterranean. The Romans had first conceived of this idea but it took the ingenuity of Pierre Paul-Riquet, a wealthy tax collector in the employ of King Louis, to overcome the substantial engineering obstacles. In 1680, the Royal Languedoc Canal (now the Canal du Midi) opened, linking Toulouse and Sète, effectively enabling safe harbour for the intra-France transport of Louis XIV’s royal barges and other vessels carrying important cargoes, such as wheat, wine and textiles. No longer would vessels have to sail through the pirate-infested Straits of Gibraltar and up the coast of Spain, to reach the wine dealers of Bordeaux and the traders of western France.

The second Italian connection becomes apparent even as you stroll through the old streets of the Quartier Haut. Listen to the locals and you hear a strange accent which is halfway between the dialect ot the Langue d’Oc and Italian. Some of the local food specialties – such as tielle, a pastry pie stuffed with squid in a spicy tomato sauce – do not seem very French either. Arnaud, my endlessly cheerful guide, swears that his grandmother makes the best tielles in Sète. Later on, having tasted one, I am less surprised that this dish has not yet achieved culinary fame on the French mainland, let alone overseas. But then, to be fair, the tielle I tasted wasn’t his grandmother’s.

During the 18th century, Italian fishermen from the impoverished Neapolitan coast came to Sète en masse – they fished, weighed anchor, put down family roots and prospered. Many of the ancestors of these Italian families are buried in the Cimetière Marin, a tranquil place shaded by cypresses which is situated on a sheltered, South-facing hillside overlooking the Mediterranean. It resonates with the history of Sète and the individual memories of its former inhabitants – many of the sailors’ names are of Italian origin. Most of the tombs are well-preserved and clearly still oft-visited – the custom is to place a pebble on the tomb as a token of remembrance.

One such modest tomb is the resting place of Sète’s most famous son, the celebrated poet and man of letters, Paul Valéry, who was also part-Italian.

These are the opening lines to Valéry’s most famous poem, Le Cimetière Marin, a Symbolist exploration of life and death, refected through the lens of the tranquil cemetery.

My tour of Sète moves on from the ‘Sailors Cemetery’ and back to the harbour-side. It is now midi so I am able to cast off these musings on mortality, order an apéro and feast my eyes upon an almost overwhelming range of fresh fruits de mer. I choose six huitres for an entrée – the Etang de Thau produces some 10 percent of the French oyster harvest, so these beauties have travelled about half a kilometre from bed to plate. For the plat, I am unable to resist some freshly caught sea bream with a Noilly Prat sauce, which promises to be both fragrant and light. The famous Vermouth is produced just down the road, in Marseillan, so I am supporting several facets of the local economy with my gastronomic choices.

Summertime in Sète brings visitors from northern Europe, not just for the history and colourful atmosphere of the port but also to soak up the sun on its 12kms of beaches, the pride and joy of the city’s tourism officials. These prized sands are being carefully developed and preserved by the authorities, to maintain their quality and also prevent the erosion which has changed this coastline so much over the centuries.

Visit in August and be sure to stay during the Fête Saint Louis – four days of concerts, street music, exhibitions and festivities. Simply do not miss the legendary water jousting on the Canal Royale, an event which is said to date back to the celebrations of 1666, when the port was given its Royal charter. The jousting is a modern re-enactment of a moment in history, one which determined the future of this appealing and unpretentious Mediterranean port.

Chez Francois: Alongside the harbour, on Quai General Durand, this local restaurant is popular for its seafood specialties, and you can eat outside. Tel: +33 4 67 74 59 69.