Great Destinations: The Waterways of Tarn-et-Garonne 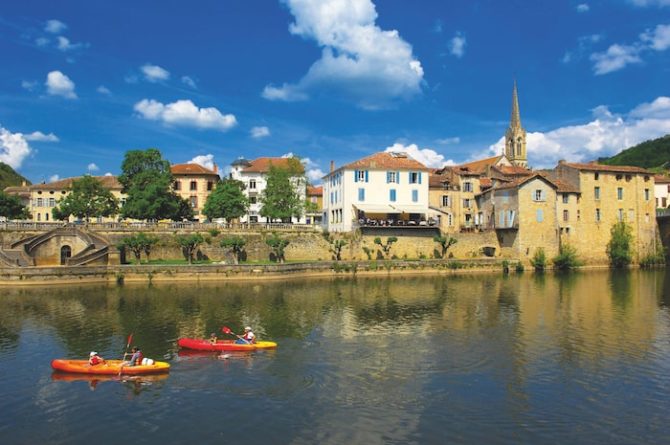 Gillian Thornton explores this watery idyll in the South-West

Relaxing in the hot tub at the Moulin de Moissac hotel, I’m soaking up the tranquil view as well as the bubbles. Beyond the arched window of the cellar spa, the Tarn flows swiftly beneath the red brick arches of the Pont Napoléon and on to join the nearby Garonne. There has been a mill on this site since the 1400s, but after a catastrophic fire in 1916, the building was abandoned until the 1930s, when it was converted into a hotel. But wealthy guests in the 1930s enjoyed a very different kind of spa experience.

Moissac enjoyed a brief but heady period as a station uvale, a place dedicated to detox treatments involving local Chasselas grapes. Today the grapes are highly prized for the table, but 1930s curistes ate the fruit and drank the juice primarily in order to cleanse and rebalance their bodies. The Second World War put paid to treatments in the riverside uvarium, which is now a restaurant kiosk with Art Deco grape designs, but Moissac remains a gem of Tarn-et-Garonne, a département that is not only one of the smallest in mainland France but also its newest. 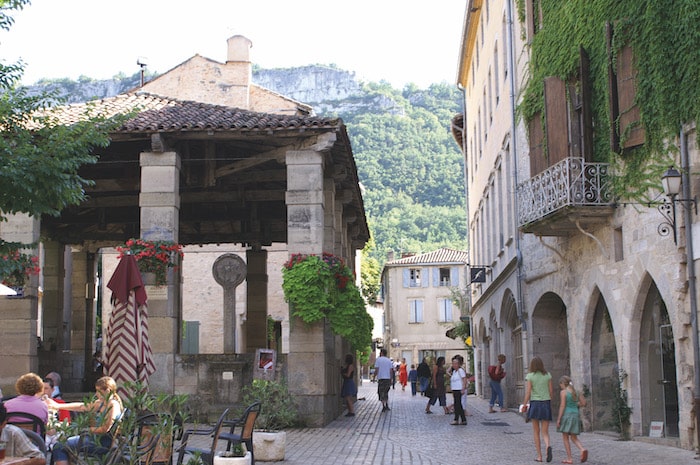 The town of Saint-Antonin-Noble-Val. Credit © ADT82

Fed up with playing second fiddle to Cahors, prefecture of the Lot, the Consuls of Montauban asked Napoleon to create a new département. Thus Tarn-et-Garonne was born in 1808, its territory lifted from six neighbouring départements: a little bit of Lot-et- Garonne here and a smattering of Aveyron there, a smidgeon of Gers and a small slice of Haute-Garonne, a sliver of Lot and a modicum of Tarn. Legend has it that the Emperor drew around his fist on a map to create the boundaries. However it happened, Napoleon’s gesture created a new département with a wide variety of landscapes, from dramatic gorges to rolling hills, tranquil river valleys to fertile flat land. Orchards and vineyards too; Tarn-et-Garonne produces 80 per cent of Occitanie’s fruit, including plums, cherries, apples and, of course, those Chasselas grapes. 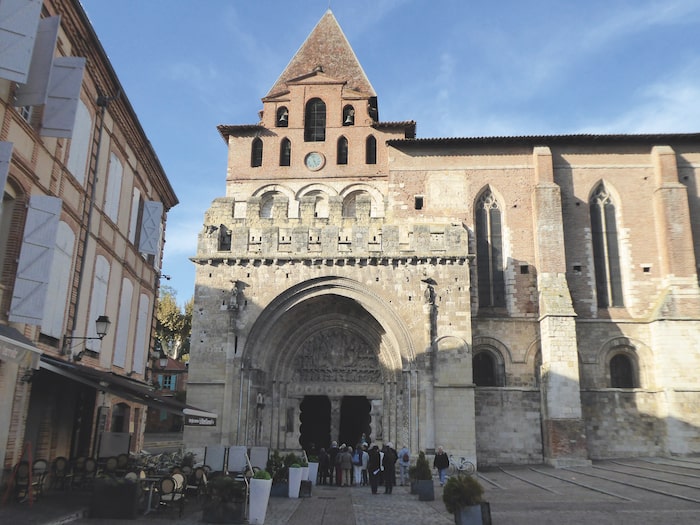 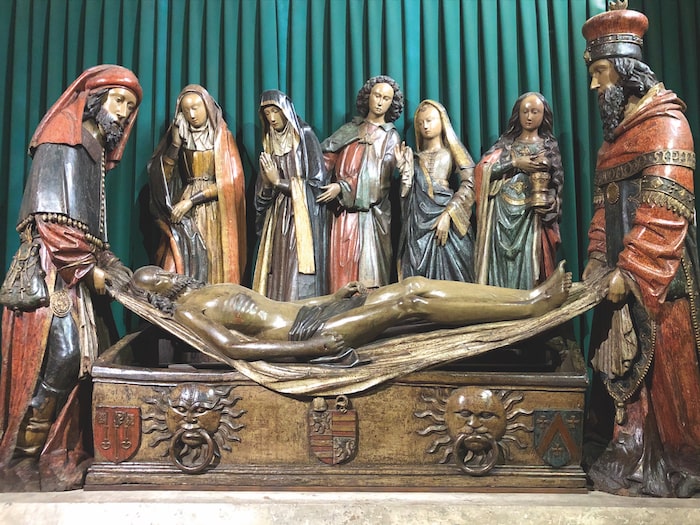 The 15th-century walnut carving of the Burial of Christ in the Abbaye Saint-Pierre, Moissac. Credit © Gillian Thornton 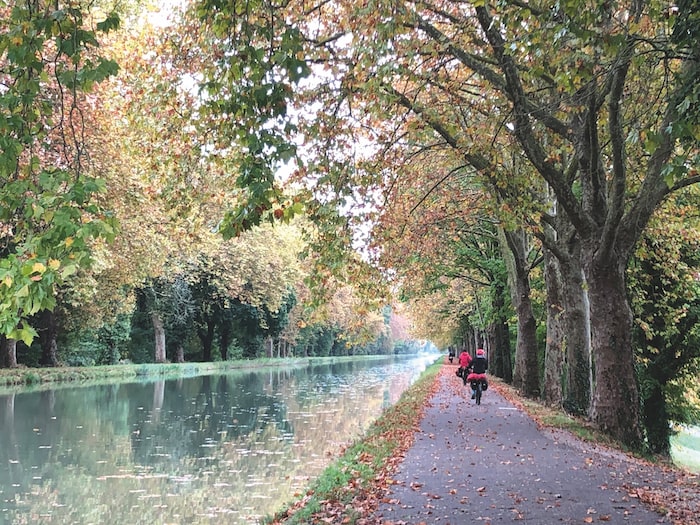 Cycling along the towpath of the canal de Garonne. Credit © Gillian Thornton

Take a hire car from Toulouse airport and in less than an hour you can be in the pink-brick beauty that is Montauban. But I started in Moissac, a little further west, cleansing my soul not with grape juice but in the tranquil surroundings of the UNESCO-listed cloister of the Abbaye Saint-Pierre.

France is blessed with some super-special cloisters, but you’d be hard pushed to find anything more spiritually perfect than this Romanesque treasure, with each of the 76 capitals on the pillars supporting its colonnade carved with different figures and foliage. The abbey church as it stands today dates to the 11th century and boasts a fabulous sculpted doorway and tympanum, painted walls, and a deeply moving group of painted wooden figures at the Burial of Christ. Outside the church, look out for the cute contemporary figures of mother and child on a public bench; the Art Deco buildings, erected after a disastrous flood in 1930; and the historic mill.

Following the Tarn upstream from Moissac, I reach the Canal de Garonne, which links Toulouse with Bordeaux. This 19th-century feat of engineering solved the problem of fluctuating river levels and made it possible to transport goods throughout the year.

Just outside Moissac, the man-made waterway crosses the natural one on the elegant Pont-canal du Cacor. After heavy overnight rain upstream, I find the Tarn flowing orange beneath the arches of pink Toulouse brick. The canal towpath is one of the most popular voies vertes in France, a level trail for cyclists and walkers punctuated with history, nature and tempting places to eat, like, for one fine example, the Bistrot Constant at Montech. 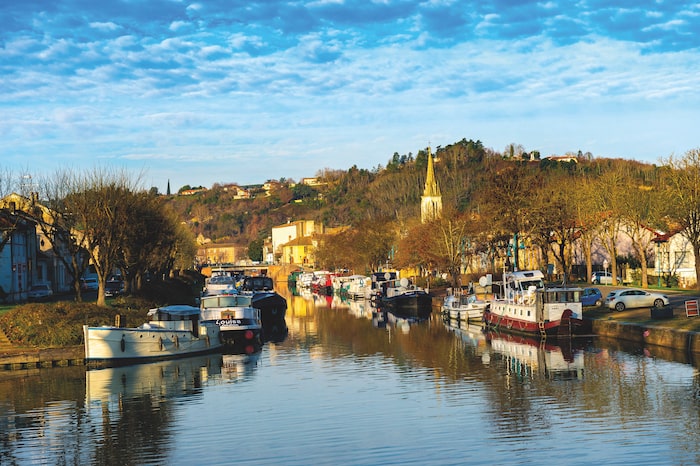 Moissac remains a gem of tarn-et-garonne, a département that is not only one of the smallest in mainland France but also its newest. Credit © Alamy

A few kilometres further south, on the banks of the Garonne, Belleperche Abbey was founded in the 12th century, rebuilt in the 13th century, and then again in the 18th century. Today it is best known for its permanent exhibition ‘La Table est mise’ (the table is set’), a fascinating walk through the entire social history of table dressing, encompassing everything from Tudor plates right up to contemporary ceramics and crockery.

The Garonne merges with the Tarn a few kilometres further north, at Saint-Nicolas-de-la-Grave, a classic bastide town dating from 1135 and built in the area’s signature pink brick. In 1658 it was the birthplace of Antoine de la Mothe Cadillac, founder of Detroit, Michigan, during the reign of Louis XIV. Visit the museum and find out how this adventurous Frenchman came to have a car named after him. A substantial riverside leisure park at Saint-Nicolas offers swimming and kayaking, camping and fishing, but the big draw in winter is the bird reserve, which attracts large numbers of migratory and overwintering species. 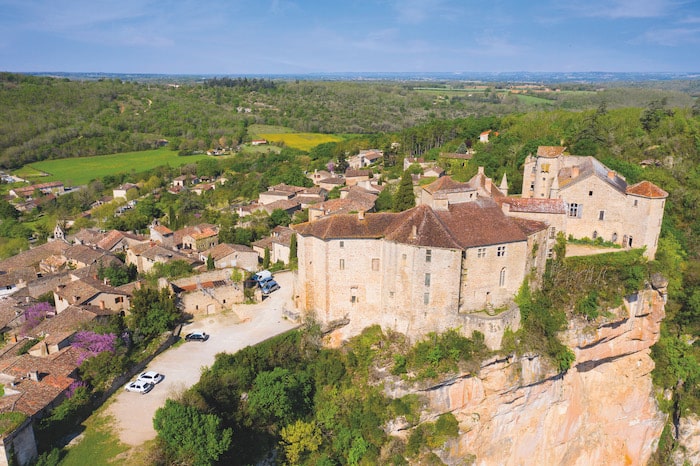 The view over the plus beau village of Bruniquel. Credit © Shutterstock

Nearby Auvillar is a must-see, one of three contrasting communities in the département classified among the Plus Beaux Villages de France, along with Bruniquel and Lauzerte. A medieval river port that grew rich on tolls from passing boats, Auvillar is one of my favourite PBVs anywhere, with its ancient buildings, a panoramic riverside terrace, and a circular covered market. I arrive to find early-morning mist still hanging over the quiet streets, which simply adds to the atmosphere of this village.

With a long history of pottery manufacturing, Auvillar also hosts an annual ceramics fair in mid-October which attracts artists and visitors from far and wide. Look out for the eclectic mix of pottery figures positioned around town and visit the new Office de Tourisme des Deux Rives and exhibition centre.

From Auvillar, I head back through Moissac to the northern fringes of the département, where it’s been recommended I visit Montpezat-de-Quercy. This charming Cité de Caractère is the kind of place I could imagine putting down roots, a small town of 1,600 people with medieval arcades and remains of ramparts, a 14th-century gateway and panoramic countryside views, but equally importantly, a buzzing local community and cultural programme. 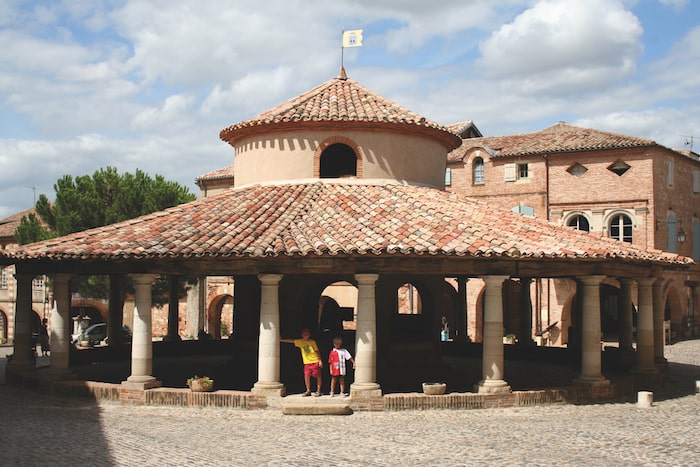 Don’t miss the Collégiale Saint-Martin with its five Flemish tapestries from the 16th century depicting the life of Saint Martin de Tours in glorious full-colour detail, or the 15th-century maison des Chanoines behind the church. Then head to Caussade, home to hat block maker Didier Laforest and see if you can resist a new hat from his boutique!

After a Saturday night stay at Le Couvent de Neuviale, a charming guesthouse near Parisot, I drive east to the banks of the Aveyron river to experience the Sunday morning market in Saint-Antonin-Noble-Val. In summer, the river here is splashed with colourful kayaks; in autumn, the water is quiet, but the town centre is buzzing with seasonal produce and craft stalls. But you only need turn down a quiet side street for the full-on atmosphere of centuries past. The carved heads of medieval lovers on the Maison de l’amour; elegant arches and lintels; and a wealth of historic buildings. 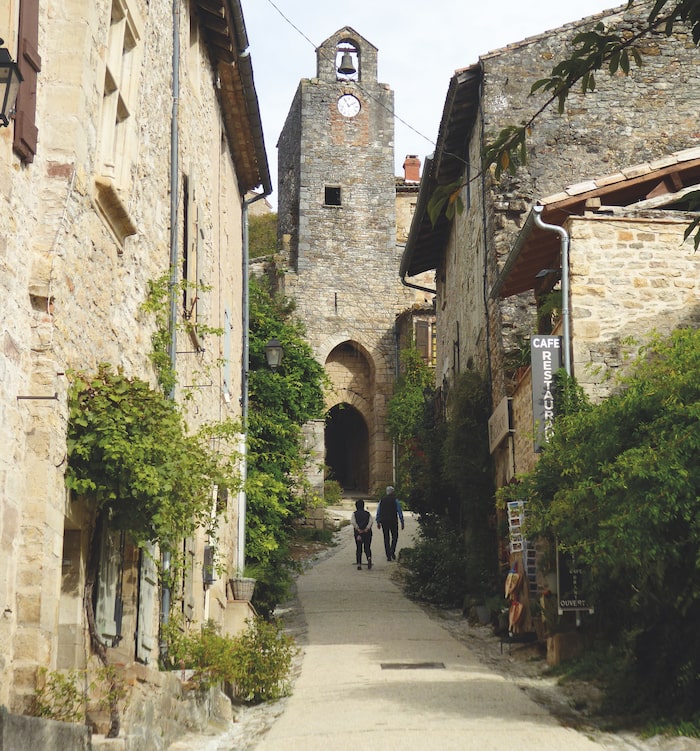 A stroll through Bruniquel, one of the Plus Beaux Villages de France. Credit © Gillian Thornton

Follow the winding corniche from Saint-Antonin above the Aveyron Gorges and you soon pitch up in the plus beau village of Bruniquel. Or at least at the foot of it. Bruniquel is another stunner, with narrow streets leading to two lofty castles built side by side on the cliff edge. Movie buffs will recognise locations from the 1975 film Le vieux fusil starring Romy Schneider and Philippe Noiret.

Bruniquel’s Old Castle dates from the 13th century, the new one from the 15th, and their interiors reflect changing styles through to the 19th century. Don’t miss the small exhibition about ongoing archaeological research into circles of broken stalagmites found 300m below ground. Dating back 176,500 years to Neanderthal times, they are the oldest subterranean human traces in the world.

And so to Montauban, on the banks of the Tarn, founded in 1144 by the Counts of Toulouse to protect their northern territories, and now prefecture of Napoleon’s newest département. A staunchly Protestant city in a largely Catholic country, Montauban’s octagonal fortifications were destroyed in 1629 by Richelieu, who commissioned a new Catholic cathedral at the highest point of the town. Built in white stone to stand out from the city’s pink brick, this statement church overlooks a large square currently under refurbishment as a public garden with underground car park. Stay at the Hôtel du Commerce for a friendly base in the city. 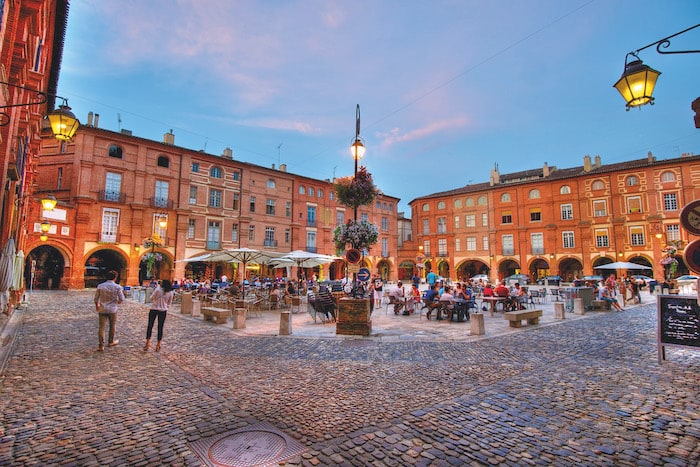 Take a café table on the place Nationale in Montauban, the heart of the city since the 12th century. Credit © Shutterstock

One must-do experience while you are in Montauban is to take a café table in place Nationale, the trading and civic heart of the city since the 12th century. Rebuilt in red brick after a fire in 1649, it has roads emanating from each corner and double arcades on all four sides. Look for the metre rule that stands on the corner of rue Princesse and rue Malcousinat, one of just four in France and used for measuring lengths of the local thick woollen cloth, or caddis.

Montauban was also the birthplace of two contrasting artists: the painter Jean-Auguste- Dominique Ingres in 1787; and the sculptor Antoine Bourdelle in 1861. See work by both illustrious Montalbanais in the newly refurbished Ingres Bourdelle museum housed in the former riverside bishops’ palace. Less well known, but equally noteworthy, is 18th-century playwright and champion of women’s rights Olympe de Gouges. Executed by guillotine in 1793 for opposing the Revolutionary government, she is proudly remembered in Montauban.

Before I head to Toulouse airport for my flight home, there’s still time to raise a glass to this bijou département at Château Boujac in Campsas. Here, on the left bank of the Tarn, Michelle and Philippe Selle produce organic PDO Fronton wine, red and rosé varieties made from at least 40 per cent Négrette grapes. You can taste on site and buy at vineyard prices, but why not go one step further? Visitors can order picnic baskets to enjoy on farm walks, play their own private escape game in the cellar, or reserve a bespoke wine and dine experience. Three very good reasons for me to plan another trip soon! 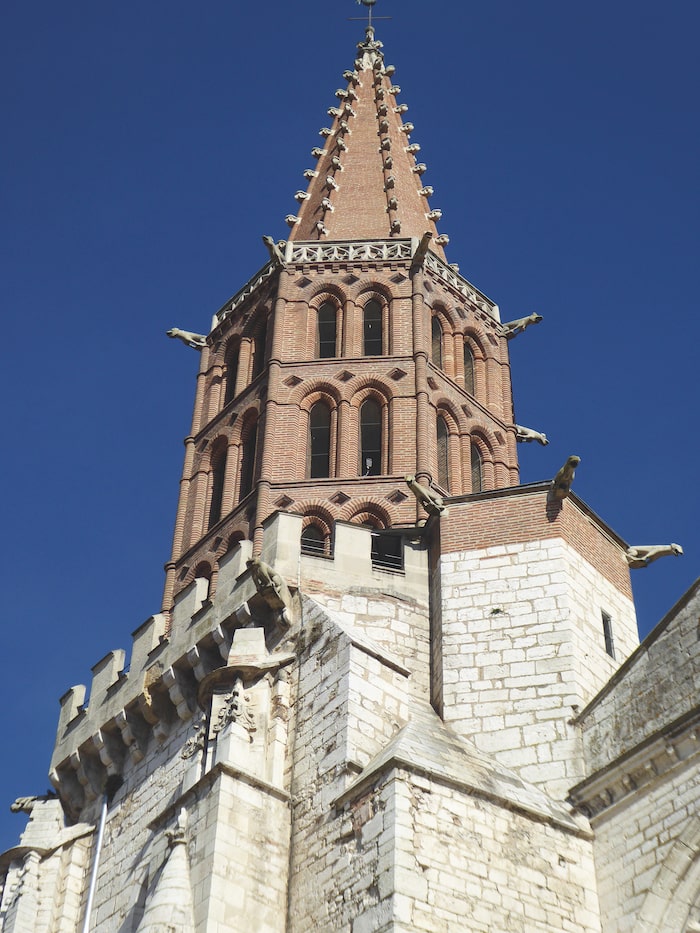 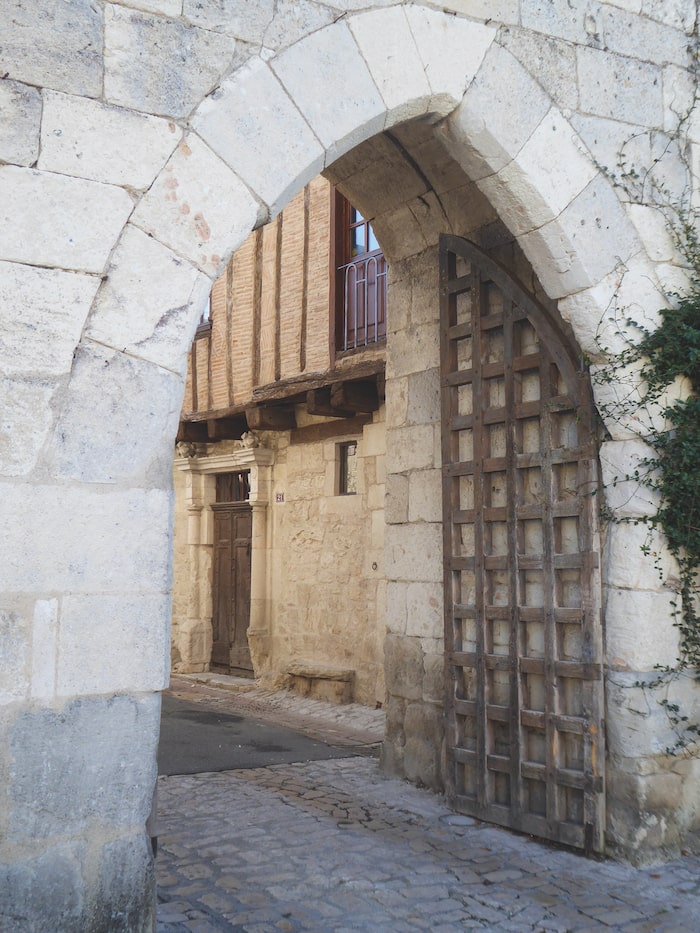 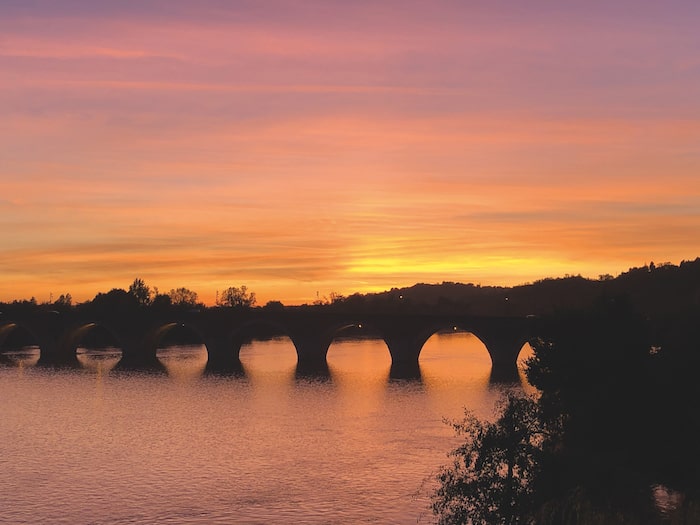 More in Montauban, plus beux village

Previous Article 12 Things to Do at Île de Noirmoutier in the Vendée
Next Article Cook’n with Class: A Taste of France in My Own Kitchen