Travel to Brittany: Exploring the Molène Archipelago off Finistère 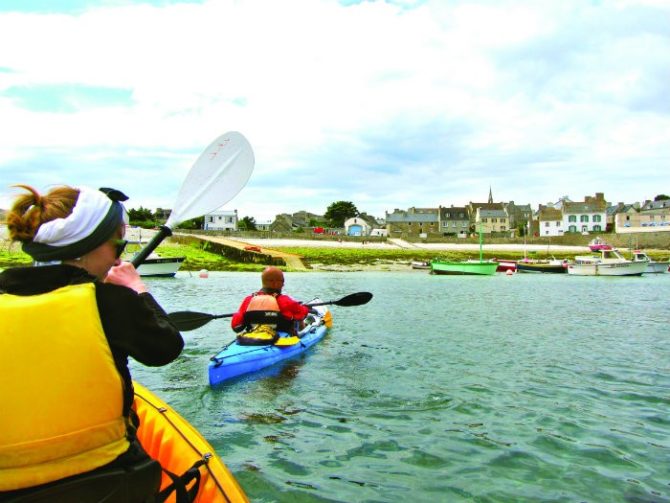 The name Finistère, which graces France’s western-most departément, literally translates as “the end of the earth”. However, across the waters beyond Finistère’s tip another world awaits, that of the Molène Archipelago. This string of islets in the Îles du Ponant culminates with the Île d’Ouessant – or Enez-Eusa in Breton, which means “the farthest island.” It’s an area that seafarers have forever dreaded, owing to its submerged rocks and treacherous currents.

An old sailor’s proverb warns, “Qui voit Ouessant voit son sang, Qui voit Molène voit sa peine” (“He who sees Ouessant sees his blood, He who sees Molène sees his sorrow”). For the 17th-century Catholic missionaries who sailed from the French coast in the direction of Ouessant, the short voyage was a great leap of faith indeed. But what they discovered there was totally unexpected: an island with an exceptionally mild climate and a population which lived in harmony with nature – ‘heathen’, perhaps but, as one missionary wrote, of “unequalled moral purity”. Ouessant was a veritable paradise lost!

Nowadays, travelling to the Île d’Ouessant is no longer the perilous journey it was before the advent of radar. It takes but an hour by boat from the Breton town of Le Conquet to reach the island’s eastern cliffs. Yet from the moment that the ferry drifts into Ouessant’s tiny port, one is still struck with the feeling of having reached the final outpost of civilization – a thrilling, slightly surreal sensation, often accentuated by the presence of wild seals or dolphins playing among the boats.

Ouessant and the Molène Archipelago remain a world apart and now constitute a UNESCO Biosphere Reserve, a haven for adventurous travellers offering countless delights that you could only expect from one of those rare places where man and nature still manage to coexist.

As the founder of the Salon International du Livre Insulaire, Ouessant’s annual festival dedicated to island literature, Isabelle Le Bal is an expert on the distinctive character of islands and islanders.

“The economy of Ouessant has changed, there are fewer professional sailors,” says Le Bal, herself born from a long line of Ouessant mariners. “But the spirit and soul of the island remains – the spirit of solidarity, of standing together in the face of the hazards and fortunes of the sea.

“Gauguin famously said, ‘I love Brittany: there I find the wild and the primitive.’ And when we come to Ouessant today in 2015, it’s still the same wild and primitive beauty. Primitive, in that society on Ouessant – the values that bind it – are still fundamentally the same as 200 years ago. And wild, in that the landscape has not changed, and the light on Ouessant remains as much of a shock for visitors today as it was in the 19th century.”

A stunning, panoramic view of this landscape can be taken in from the 1699 Stiff Lighthouse, the oldest of five, just a stone’s throw from the port of arrival. At the opposite end of the 8x4km island, which is shaped uncannily like a crab claw, stands the black-and-white-striped Créac’h lighthouse. Its former engine room is home to the Musée des Phares et Balises, which retraces the history of lighthouses. Rising up near the middle of the island is the steeple of the church Saint-Pol-Aurélien, in the village of Lampaul. Inside, lovely stained glass windows portray biblical scenes relating to fishing and the sea. In the cemetery, a unique tomb contains numerous wax crosses, called proellas, symbolising Ouessant sailors whose bodies were lost at sea.

Along the northwest coast, up to the breathtaking Pointe de Pern, fang-like granite peaks rise from out of the sea. There, even when weather conditions are relatively calm, the waves churn and froth. The southern coast is quite different, characterised by quiet coves of emerald green water and sheep grazing on grassy, windswept hillsides.

Everywhere along the shoreline, plant life uniquely adapted to the marine environment abounds, including Yellow Centaury, Rock Samphire, Greater Sea-Spurry and Glasswort. Rare ferns, such as the Primitive Quillwort and Least Adder’s-Tongue grow on the granite cliffs alongside rare and strangely beautiful lichens. Inland, every walking path is splashed with colour by gorse and bell heather, which perfumes the air and provides nectar for Ouessant’s black honey bees, for whom the island is the last refuge from the parasite that’s decimating their continental cousins.

Many certainly try to ‘do’ Ouessant in a single day, but over the course of a weekend or more, one starts to really appreciate its quiet, insular rhythm. Ouessant boasts engaging museums, vestiges of Neolithic-era civilisation (including a circle of megalithic standing stones), a charming village and even respectable eateries. In Lampaul, fine seafood dinners can be had at the intimate Ty Korn restaurant, and Roc’h Ar Mor offers perfect moules-frites and a terrace overlooking the bay. However, Ouessant’s greatest pleasures come from simply exploring the natural landscape, whether by rental bike, tour bus, horseback or on foot. Cédric Caïn, a Ouessant park agent, passionate ornithologist and photographer, has been exploring the island’s 45km of coastal paths his entire life. He launched his website, Lumières d’Ouessant in 2005.

“I wanted to share my passion for photography, and all the landscapes and riches of nature which can be observed on Ouessant,” he says. “Around 400 species of birds have been recorded on the island, and I think many have yet to be discovered.” Caïn should know, in 2014 he was the first person ever to sight a Chestnut Bunting (Emberiza rutile) on Ouessant, which had ostensibly flown all the way from Asia.

“Ouessant is doubtless the place where you can observe the greatest diversity of birds in France,” he says. These include Arctic Puffins, African Hoopoe, Asian Buntings, even the occasional Great Blue Heron blown over from North America. “Ouessant is a veritable migratory crossroads.”

For all its beauty, many ‘continentals’ couldn’t imagine spending months on an island. Still, every year, authors from around the world are hosted for a multi-month writer’s residence in the Ouessant sémaphore, a former observation tower adjacent to the Créac’h Lighthouse. Isabelle Le Bal, who co-founded the residence, says that, for many writers, “it’s a terrifying experience… it’s like Stendhal Syndrome, they’re ravished by the beauty but devoured by their surroundings. Liberated from the typical distractions of daily life, they have this great freedom to write, alone, facing the ocean and the blank page. And that can be terrifying!”

This sense of isolation is especially present during the season when nature’s spectacles become jaw-dropping.

“My favourite time of the year is winter,” says Cédric Caïn, “when all the storms come and the landscapes become so breathtaking.” He’s stood on the Pointe de Pern to watch many a February storm, and once photographed a 12-metre wave crashing over the Nividic Lighthouse.

To the ‘Bald Island’

Ouessant has grandeur to be sure, but its neighbours have a saying: “The most beautiful thing to see from Ouessant… is Molène.” Just 11km to the east, the tiny Île de Molène boasts a delightful port and village with narrow streets and Hydrangea-circled houses. The beautiful, 4km-long path circling the island can be hiked in an hour if one hurries, though Molène is an island that’s best savoured slowly.

Molène lacks trees – it’s name is Moal-Enez in Breton, meaning “bald island” – but below the knee beauty is abundant. When gorse and bell heather flower in unison, the whole island seems afire in yellow, pink and violet. Moreover, Molène is the stepping stone to the archipelago that bears its name. From Molène, you can snorkel over the the archipelago’s vast seaweed beds – Europe’s largest underwater forests – kayak around secluded islets or observe dolphins, grey seals and rare marine birds by boat.

Every year, a small number of travellers who are looking for a total island immersion set off from Molène for France’s most far-flung B&B. David and Soizic Cuisnier, along with their children Chloé and Jules, run an organic potato and sheep farm on the 1.5x4km Île de Quéménès, and welcome guests seven months of each year. Completely energy independent, they recycle water and harness solar and wind energy. They collect seaweed for sale on the continent and restrict access to half the island to allow rare bird species to nest.

“Our objective is to reconcile the presence of man and the preservation of the site,” says Soizic, “to make a living while upkeeping and safeguarding the island’s heritage.”

And if you think that life must get monotonous on an island that small, think again. “The beauty is in the changes,” she says. “Our surroundings change constantly from one moment to the next, depending on the clouds, the tides and the position of the sun. One minute you look up and dolphins are passing by, and the next you’re unloading the boat and a seal comes to see what you’re up to – it’s a place of constant surprises, one that never ceases to inspire. There’s so much to see, but you have to learn how to sit still, look and be curious – people have forgotten how to do that.” an idyllic view of Quéménès, the site of France’s most far-flung B

The true magic of these islands, and perhaps the reason why they’ve remained preserved for so many centuries, is in their potential to somehow change everyone who steps foot on them. They stir something deep within us and unexpectedly, inexorably, pull us closer to nature.

Les Îles du Ponant Essentials: How to get there, Where to stay & more…