A Weekend’s Punting and Pampering in Brière 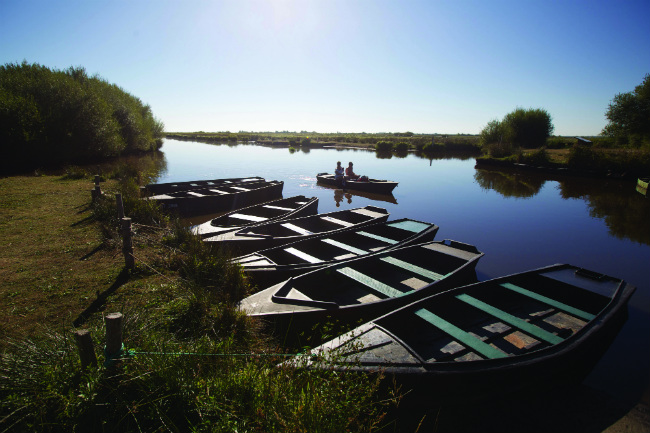 Vast, ominous clouds linger stubbornly in the sky, but Valentin, the hulking, tattooed captain aboard our chaland (a flat-bottomed, wooden boat) keeps his sunglasses on as he guides us through the picturesque Brière wetlands. Exploring a labyrinth of sprawling marshes and winding canals on a midsummer’s afternoon, we cruise along at a snail’s pace. Towering reeds dance in the breeze, reaching out to us from the swampy banks, where purple loosestrife, marshmallow plants, iris and water mint dot the landscape.

Nestled in the far western corner of France’s Pays de la Loire region, the Parc Naturel Régional de Brière is a nature lover’s paradise. With some 50,000 acres of wetlands, it’s the country’s second-largest marais after the Camargue, and also among the most biologically diverse in Europe. The Grande Brière, as it’s more commonly known, is home to a rich birdlife; the park is a yearly stop-off point for more than 50 species of migratory birds. Birdwatching takes place between April and June, when egrets, purple herons, avocets and bluethroats are a common sight. 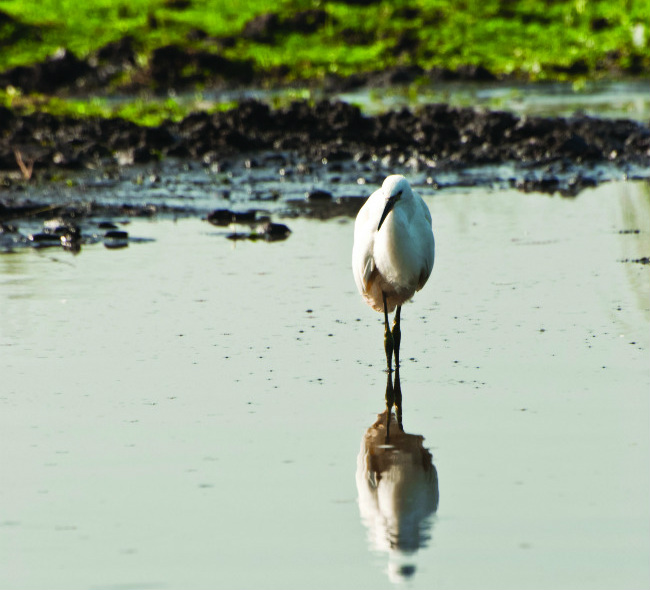 Armed with a pair of binoculars, I spot an African sacred ibis wading alongside the reed beds, a marsh harrier gliding along in the distance, and a spoonbill skimming the water’s surface in the hunt for food. Besides these feathered friends, otters, coypus and several species of fish also call these swamplands home. But for all of Brière’s impressive biodiversity, visitors to Bretagne Plein Sud don’t always make it beyond the swanky seaside resort and regional poster child of La Baule. For those who do, a leisurely boat tour (guided or self-guided) is a wonderful introduction to the marshlands’ tranquil beauty. There are several jetties allowing you to jump aboard one of these traditional punts dotted throughout the area.

The park is also famous for its well-preserved hamlets awash in charming thatched roof cottages known as chaumières, with around 3,000 still standing throughout the region. They’re the remnants of another era, when the local reed-picking industry was thriving and the harvested roseaux supplied the thatching for these authentic maisons briéronnes. A perfect example is the tiny village of Kerhinet, which has evolved into an open-air museum of sorts. Today, only one house is permanently occupied. Besides an on-site restaurant and a small hotel, you’ll find boutiques selling handicrafts and regional products, as well as exhibition spaces that regularly play host to local artists. But it’s the summertime farmers’ market (every Thursday) that draws the big crowds, when the village’s traditional stone ovens are put to good use by local boulangers baking fresh bread. 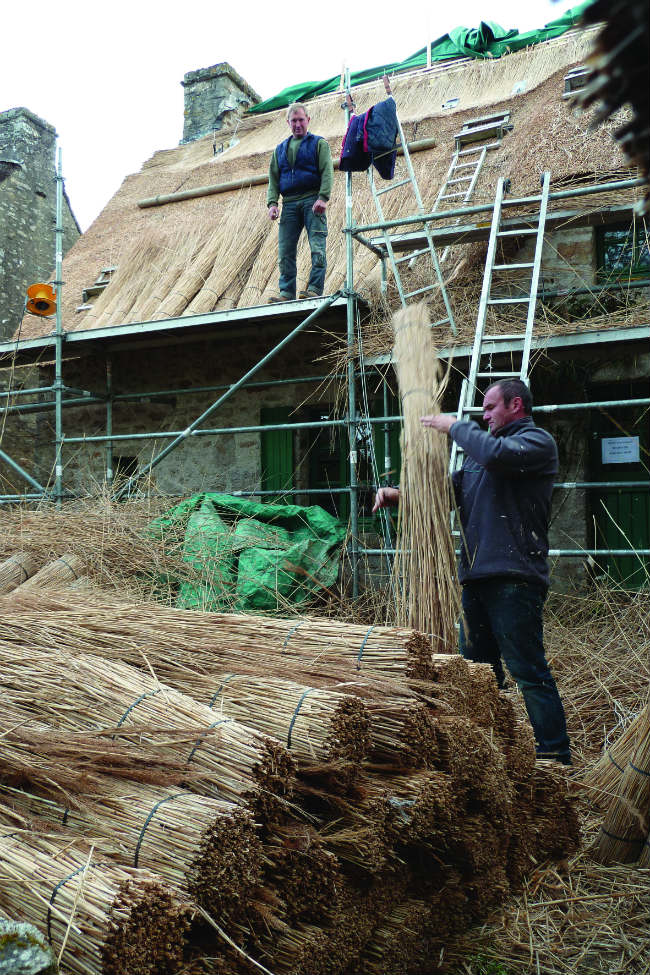 Thatching is a skill that is being revived in Brière. Photo OT Brière/ P Chaumiers

Kerhinet, for the most part, was left abandoned during the first half of the 20th century, when people tended to leave traditional village life behind for a glittering future in the city (usually Saint-Nazaire, the port city situated some 20km away). The region’s chaumières, then widely viewed as peasant houses, were a casualty of this social mobility. Then, in the 1970s, French authorities wanted to open a window into the past, showcasing the unique local architecture and an almost forgotten way of life. But by that time, there were only two local artisans chaumiers left who specialised in the toit de chaume construction technique. As part of a bid to revive this regional savoir faire, Kerhinet’s 18 dwellings, and thousands of others throughout Brière, were lovingly restored to their former glory. Interestingly, some four decades on, tastes and trends seem to have come full circle; today, thatched roofs are something of a status symbol – they don’t just boast character, they are also expensive to install and maintain. 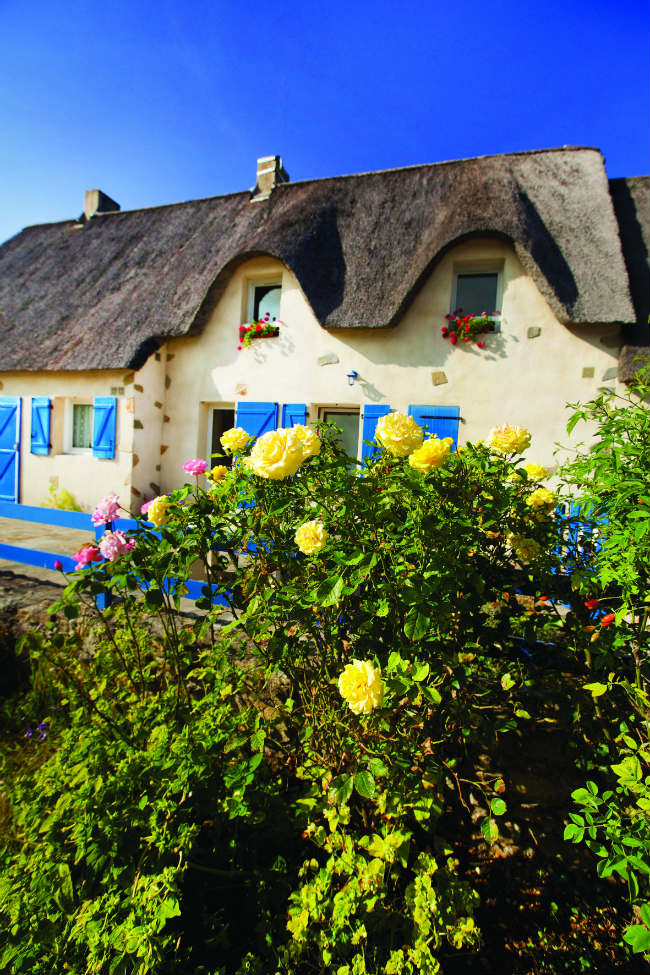 Traditional houses can be spotted in the villages of Saint-Lyphard, Saint-André-des-Eaux and Saint-Joachim on the Île-de-Fédrun, although their neat white façades set them apart from those seen elsewhere in the park. Tucked away amongst this picture-postcard setting is La Mare aux Oiseaux, a four-star boutique bolthole that offers a real getaway from the touristy hustle and bustle of the nearby coast. Featuring a Michelin-starred restaurant, an inviting spa and a tranquil location in the heart of the Brière wetlands, it’s an ideal spot to escape for a weekend – or perhaps even longer.

As the name suggests, the Mare aux Oiseaux is one for the bird lovers. Diamond doves, black-throated finch, weaver birds and Java sparrows are housed in elaborate cages dotted throughout the hotel, from the reception area to the restaurant, and in the cosy salon complete with fireplace and exposed stone walls. The theme continues outside too; Japanese bantams, silkie hens and Hawaiian geese roam freely throughout beautifully landscaped gardens flanked by elegant bamboo trees, however it’s a friendly pair of black crowned cranes – eyeing me curiously every time I wander by – that steal the show! 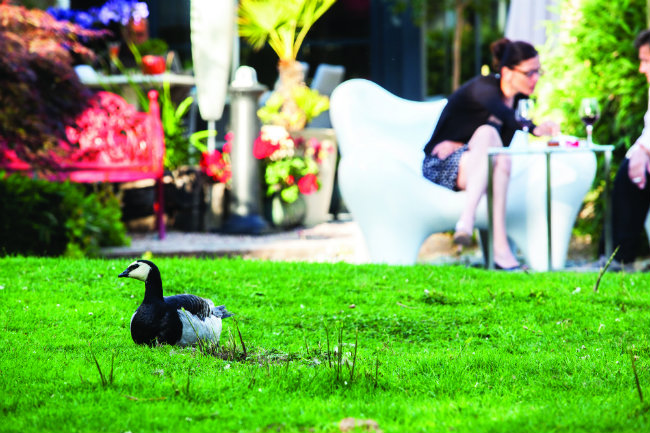 The hotel is the brainchild of chef Éric Guérin, who first came to the Grande Brière on vacation more than 20 years ago. “I came here knowing no one. I had no family or friends nearby,” he explains. “But the decision changed my life and now I feel very connected to this place.”

The hotel is awash in whimsical décor, an eclectic but tasteful jumble of antiques, sculptures, objets d’art, bell jars and bird-centric contemporary style. “My parents collected antiques and my mother had an art gallery so I grew up in this environment,” Guérin explains. “I like to collect things on my travels and I’ve always loved beautiful things.” No two spaces in the hotel are exactly alike, each turn revealing the unexpected. “There is a magical side to the marais,” he says. “I want it to be a kind of bubble – where you go in, leave everything behind and time just stops.” 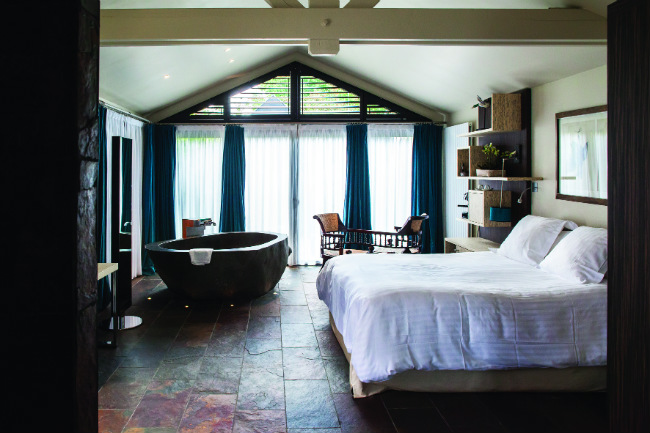 One of the hotel’s 15 bedrooms. Photo: La Mare aux Oiseaux

I certainly leave my cares behind during my too short stay. With only 15 comfortable, low-key luxe rooms and suites, intimacy, peace and quiet are almost guaranteed. My hideaway is one of three rooms in a semi-private wooden cabin on stilts, set at the far end of a shady path that leads me right to the water’s edge.

A spacious bathroom with full tub, bath salts and fluffy white bathrobes means the in-room pampering is taken care of. But for everything else, there’s an on-site spa, a veritable haven of calm. Nestled in a lush garden, the spa’s centrepiece is a sun-dappled seven-seater jacuzzi inside a glass-roofed hut. I skip the jacuzzi and the sauna and opt instead for a relaxing ‘Spirit of Africa’ massage using a three-oil combination of baobab, clay and nigella – the perfect treat for my aching muscles.

While I’m keen to indulge mind, body and soul, I don’t dare neglect my tastebuds. Gourmets come from far and wide to dine at the Mare aux Oiseaux restaurant, a modern, gastronomic snapshot of the Grande Brière, where local produce is firmly in the spotlight. “The Brière is a real melting pot for a chef,” says Guérin. “There are so many different landscapes in a small area. The sea, the forest, the wetlands and the river are all within an hour from here, the only thing missing are the mountains!” he says. “It’s very important to have access to all of this, and the produce that goes with it.” 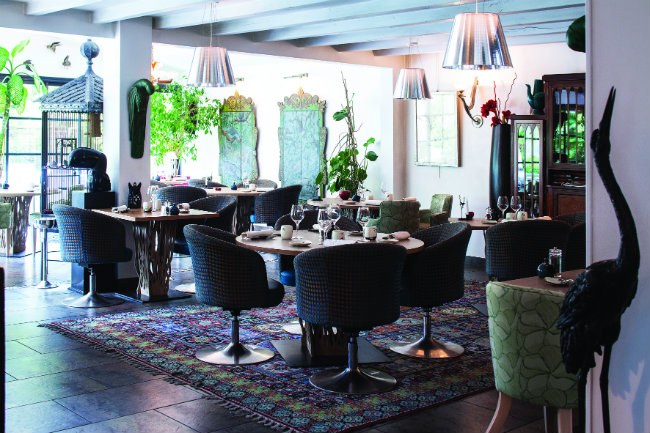 The nod to the region can be felt – and tasted – as early on as the apéritif. Among the amuse-bouches are dainty slices of langouille briéronne – smoked pig’s tongue with salt from nearby Guérande, a flavour-packed delicacy that’s as local as you can get.

“I want to share the Brière’s identity through my cuisine,” says Guérin. “It’s an honour to represent the region and I take my role as ambassador seriously.” The chef’s six-course tasting menu ‘Picorons Ensemble’ is delicious proof. A kaleidoscope of complex flavours may arouse curiosity on paper but somehow they all come together harmoniously on the plate. “I’m inspired by emotions, but also the migration route of the birds that fly through here – the idea of birds travelling and bringing things, influences, from one place to another.”

As the sun sets over the marais, I sample a double entrée of ‘Morta-style’ baby leeks with smoked eel and caviar, and a zingy fish fondant with peas, crayfish,  boudin noir jam and fresh fig-leaf emulsion. The main course, a stunning sea trout drizzled in tzatziki, evokes the last days of summer. The sweet-toothed diners are not forgotten thanks to a sinful dessert duo that follows: Guérin’s famous chocotruffe, which is only upstaged by a moreish coconut and blackberry hydrangea flower.

Each dish is beautifully presented and perfectly paired with wine, highlighting a wider attention to detail that can be seen from the carefully curated artworks on the restaurant’s walls, to the artisanal, custom-made bog-wood knives on the table, from the local craftsmen at Atelier JHP. And the gastronomic delights don’t stop at dinner. The following morning, a generous breakfast spread features homemade and locally sourced items, the highlight a perfect salted butter caramel tart that I’m still thinking about – and can still taste – many weeks later. That is just one of the many memories I took home from a trip to a magical, lesser-known part of France that is far too often overlooked. 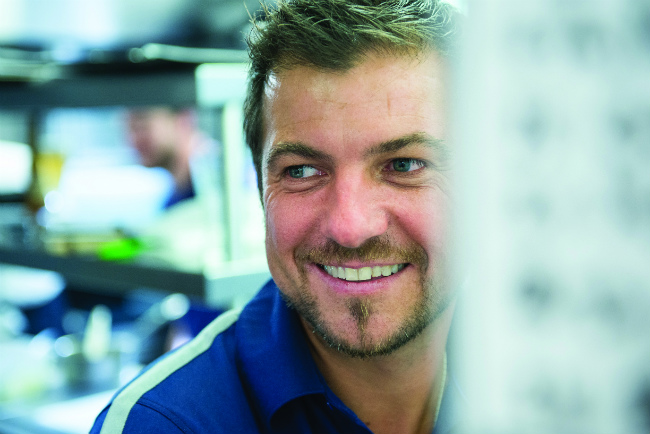 The official site for the Brière park: www.parc-naturel-briere.com 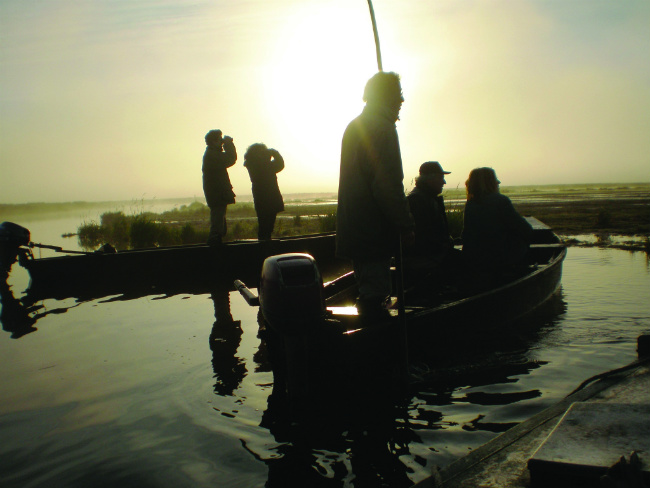