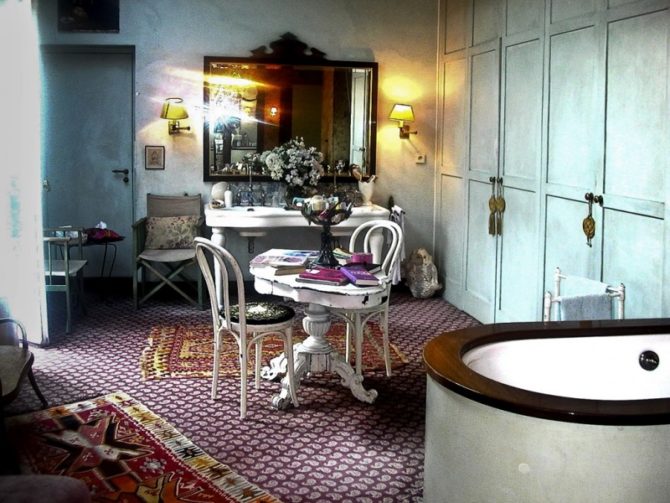 Even adventurous visitors who wander into the byways and side streets of Paris seldom manage to find access to the world behind the building facades and the portes cochères, the big carriage doors. Once upon a time they could at least explore the city’s countless courtyards and, at worst, be shooed off occasionally by a grumpy concierge. Today it’s almost impossible to breach the barrier of unyielding digicodes.

But travelers seeking to discover the private Paris behind the big closed doors might opt for staying in a chambre d’hôtes, a guest room in a private home, the French equivalent of a room in a B & B. Chambres d’hôtes come in all shapes and sizes, in every neighborhood and in a wide range of prices. Some are downright luxurious; some guesthouses even have swimming pools and saunas-the sky is the limit. Guests who fear for their privacy should rest assured: The French are very protective of their own private space and will never impinge on yours. Many rooms have their own entrance, leaving guests the choice of whether or not to socialize.

The hosts obviously rent rooms for extra income, but often they are also, just like their visitors, seeking contact with new people, especially people from different cultures. To their own surprise, though, many owners find that their rooms are often booked by Parisians celebrating a special occasion-a birthday, wedding anniversary or Valentine’s Day. Many B & B owners have spent time in other countries; most speak English and enjoy meeting American guests. And running a guesthouse allows some innately creative owners to give vent to their penchant for interior decoration, sharing that particularly French art de vivre with their visitors. As a general rule, they love Paris and are proud to share it with their guests.

Villa Clara is a unique private mansion with a wrought-iron gate and a cobbled, leafy courtyard, tucked away in a historic gated alley at the foot of the legendary artists’ quarter of Montmartre. The owner and sophisticated hostess Clara Limage comes from the world of fashion and art. Widely traveled, she has brought back a knowledge of several languages and an eclectic choice of artifacts that now fill her home, along with beautiful antiques inherited or collected over the years, and a good helping of kitsch. It all works perfectly in this hôtel particulier dating to the Second Empire, the kitsch era par excellence-witness the neo-Gothic turret where the guest shower is now installed.

The single guest room here is in fact a 1,076-sq-ft apartment on the top floor. The big living area, beneath an enameled coffered ceiling, is sprinkled with a medley of contemporary and antique furnishings-even a massage chair-and a monumental Renaissance fireplace. It’s also equipped with cable television, DVD and CD players and a Wi-Fi internet connection.

The bedroom is an Arabian Nights fantasy, a rotunda draped in silk the color of jade with a king size bed under its cupola. The colossal bathroom has a mahogany tub and is really a cross between a lounge and a boudoir. Once huddled into the cozy bathrobes and slippers left at your disposal, you can relax, pop the cork of your welcome bottle of champagne and enjoy your glass of bubbly on the small adjacent balcony.

A sumptuous breakfast, with lovely china and silverware, is served downstairs in the glass conservatory-a feast of crunchy bread and hot croissants, cereals and eggs, cheese and cold cuts, fresh or stewed fruit. In nice weather, you can shift your breakfast quarters to the outdoor terrace amid the roses and lavender. On request, Clara can also cook dinner for you, entertain your guests or just give you further advice over a cup of coffee or a glass of champagne. If you’d rather be left on your own, you can check the book she has compiled for her guests before hitting the tourist trail. It is filled with precious information about Paris and the neighborhood. 17 Cité Malesherbes, 9th, 01.45.26.19.31. www.bandbinparis.fr

Barely a fifteen-minute walk away, there’s a complete change of scene at Claire Maubert’s Une Chambre à Montmartre, a place that evokes a film set of a timeless bohemian Paris. The tourist-ridden Sacré Coeur and the funicular are practically around the corner, but no trace of them is felt once past the Maubert doorway and up a flight of stairs into the exquisite little garden. The hillside building is thought to have been a convent at one time, which might explain the atmosphere of serenity.

Madame Maubert, her husband and their two children live on the top floor of a three-floor walkup-the lack of an elevator is one price to pay for the rustic charm of the area. To the north they are level with the trees and birds, to the south they are perched above the city. The self-contained guest room across the landing enjoys the same double exposure, and also looks out over the garden-there’s even a window in the stylishly appointed bathroom, and an opening in the gray-stone shower wall facing it, so that you can enjoy the view while soaping up. Maubert was formerly an antique dealer and interior decorator, and she has furnished the room in impeccable, understated taste, setting off to advantage the wooden beams under the roof and adding a personal touch with interesting pieces of furniture and decorative objects collected over the years. Guests are treated to a lavish and delicious breakfast, and there is also a kettle, coffee and tea-both regular and herbal-in the guest room. There’s a hairdryer, free Wi-Fi internet access and two pairs of binoculars for a closer look at the 180-degree view of Paris, spread majestically at your feet-with the binoculars you can identify every single landmark and monument all the way from La Défense to the zoo in the Bois de Vincennes. 18 rue Gabrielle, 18th, 06.82.84.65.28. www.chambre-montmartre.com

Isabelle and Jacques Bravo’s Coté Montmartre is on Rue Pigalle, the one-time home of George Sand, Chopin, Victor Hugo and other notable figures of the Romantic era, who named their neighborhood La Nouvelle Athènes. The Musée de la Vie Romantique and its flowery courtyard are a five-minute walk away. The Bravos’ apartment is on the 6th and top floor of an early Second Empire building that has preserved its handsome bourgeois entrance. Their living/dining area, where breakfast is served on wet or cold mornings, is cozy, attractively furnished and has two working fireplaces.

Guests are made to feel at home right from the start, with Isabelle’s sunny greeting. Jacques is a professional photographer and will be happy to let you leaf through his beautiful photo books on Paris, La Défense and Morocco. He knows his Paris inside out, and with the help of Isabelle’s better English (she lived for nine months in Moorhead, Colorado), will be happy to share with you tips about their favorite spots in town.

Some of his photographs decorate the guest room, which has its own separate entrance across the landing and is tastefully furnished in an unobtrusive contemporary style. It comes with its own lovely shower, hairdryer and a free Wi-Fi connection. Weather permitting, breakfast is served, in fine Limoges china, on the sunwashed terrace, surrounded by passionflowers and roses and the fragrance of rosemary, lavender and thyme, with the rooftops of Paris and the basilica of Sacré Coeur in the background.

Guests are also welcome back at sunset or later for an aperitif, in the garden or by the fire if the weather is unpleasant. Come September, you may nibble on the clusters of grapes dripping from the rambling vine. (Anyone allergic to felines should be warned that Jules the cat is a full member of the family here, though he is very discreet and never wanders into the guest room.) 11 bis rue Jean-Baptiste Pigalle, 9th, 01.43.54.33.09. www.cotemontmartre.com

Americans addicted to the Marais district will love Jean-Luc Marchand’s Bonne Nuit Paris, in the less touristy, northern section of the 3rd arrondissement. The area is the core of the historic Marais, once the fief of the Knights Templar, and so far has preserved a more authentic character than the rest of the district, with the city’s oldest market, le Marché des Enfants Rouges, right nearby. Marchand’s building dates from the early 17th-century reign of Henri IV, and boasts honey-colored exposed stone walls and dark beams. Marchand offers three independent guest rooms-named Enclos des Templiers, Jardin du Marais and Rue Charlot-and he has put a lot of care into their decoration. Breakfast is taken around the rustic family table, and Marchand even buys his baguettes and croissants from two different bakers, to be sure that guests get the best of both. He also makes his own jam and honey in Dordogne, where he and his wife Denise have a country home complete with beehives. 63 rue Charlot, 3rd, 01.42.71.83.56. www.bonne-nuit-paris.com

For VIP treatment head for Jean-Christophe Stöerkel’s townhouse, Le 6 Mandel, a neo-Gothic jewel-box near the Trocadéro. A native of Nancy, Stöerkel is a landscape gardener, and he also runs a contemporary art gallery on the ground floor. The vast guest room above the exhibit space is beautifully furnished and offers a view of the Eiffel Tower from both the bedroom and the bathtub. There is no television and no telephone, but almost any guest whim can be indulged by the luxury concierge service-just ask. If you have opted for a private cooking lesson with a top chef, it can be scheduled for the big, sleek, state-of-the-art kitchen downstairs, where breakfast is also served, with plum and red currant jam made in Stöerkel’s native Lorraine. The kitchen looks out over the extensive garden, a stylized oasis of green and white hues designed by Stöerkel himself, with a charming, white-canopied nook to snuggle into in the evening with your aperitif. Stöerkel, by the way, believes the building is inhabited by the energy of its past artistic tenants, notably the American silent-film actress Pearl White (famed for The Perils of Pauline), who is buried in the Passy cemetery around the corner. 6 ave Georges Mandel, 16th, 01.42.27.27.93. www.naturelei.com

Finally, why not stay aboard a barge on the Seine? The Johanna is moored at the foot of the Musée d’Orsay, and the Solférino footbridge, with its stunning river views, leads across the river to the Louvre. Owner Parvin Oet is as much French as British by now, having married and raised her children here; her husband Olivier is French but has Dutch roots, as does the Johanna, a working river barge, or péniche, built in 1936, which Olivier turned into a houseboat back in Holland before navigating to Paris. The guest quarters, situated in the wheelhouse, have preserved their original lacquered mahogany paneling and Art Deco glass. Four people can squeeze into the two cabins, but as usual on boats and barges, space is tight, though delightfully picturesque. (Landlubbers should take note that barges on the Seine are in almost constant motion because of the ripple effect created by river traffic-it can take some getting used to.) Private shower and WC, mini-bar, Wi-Fi internet, satellite TV. Port de Solférino, Quai Anatole France, 7th, 01.45.51.60.83. www.bateau.johanna.free.fr

Thirza Vallois is the author of Around and About Paris, Romantic Paris and Aveyron, A Bridge to French Arcadia. www.thirzavallois.com

Click here for all of France Today’s favorite Paris hotels!

Best Places to Stay and Eat in Lavender Country