Of Castles and Kings 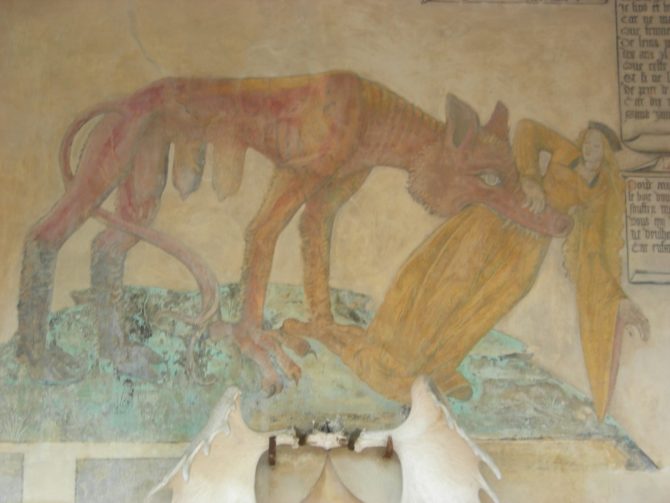 Not for the rugged Auvergne the sophisticated luxury of Renaissance châteaux. The great Massif Central, with dense forests and wild emerald ranges of extinct volcanoes, calls for stronger stuff. The châteaux d’Auvergne are mostly medieval fortresses—feudal castles meant to defend their territory or impose the authority of the kings or local lords who built them during the incessant warfare of the Middle Ages. Amazingly, more than 40 of them still stand.

They come with all the fairy-tale attributes: crenelated towers and turrets, moats and machicolations for dropping missiles on enemies below. Most are privately owned, some have been in the same families for centuries. Some are splendidly restored, others magnificent ruins. A few—Saint Saturnin, La Vigne, Vollore, Le Riau—offer rooms for bed and breakfast. All have the history of France written in their massive stones.

Anjony, La Palice and Dauphin belonged to comrades of Jeanne d’Arc. Others are linked to the Marquis de Lafayette, a native of the Auvergne. And a handful are associated with Catherine de Medici—married to Henri II, she was half Auvergnat, the daughter of Madeleine de la Tour d’Auvergne and Lorenzo II de Medici. Catherine’s daughter, Marguerite de Valois, was the first wife of Henri IV, and during her tumultuous life she was exiled in the Château d’Usson and inherited the Château de Busséol. And in fact, Henri IV’s second wife was her cousin, Marie de Medici. The Medici family story winds through the Auvergne like a connecting thread—as dramatic, romantic and enchanting as the châteaux themselves.

Rising out of a lush green valley, the 15th-century Château d’Anjony is actually only the towering donjon, or castle keep, that was once the center of a much larger walled château-fort. Built by Louis d’Anjony, an ally of Jeanne d’Arc, Anjony has belonged to the same family since 1439.

The family now lives in an 18th-century wing, but the original donjon, a 130-foot stone shaft with round towers on each corner, has hardly changed since it was built. There is one large room on each of its five floors, flanked by small rooms in each of three towers; the fourth tower houses the spiral staircase leading up to the battlements and the guards’ chemin de ronde—the sentry walkway.

In the southwest tower, the astonishing little chapel is covered from floor to Gothic vaulted ceiling with frescoes in brilliant colors depicting scenes from the life of Christ. In a niche sits the small wooden statue of a black Virgin, Notre Dame d’Anjony, she too painted in polychrome and gold.

But the chapel is only the prelude to the Salle des Preux on the second floor. The vast room is also entirely covered with mural paintings of the nine mounted Preux Chevaliers, the Valiant Knights—three Biblical (Joshua, King David, Judas Maccabaeus), three from the ancient world (Alexander the Great, Hector of Troy, Julius Caesar), and three medieval (King Arthur, Charlemagne and the Crusader knight Godefroy de Bouillon) . Only eight are left now—Caesar was destroyed in the 18th century in order to pierce a new window, an alteration that also left Alexander the Great’s elephant without a head. On either side of the painted fireplace, life-size portraits (c. 1560-80) represent Michel d’Anjony and his wife Germaine de Foix, whose aristocratic standing gave the Anjonys another boost up the social ladder.

Rigaud d’Aureille seems to have been a jokester as well as a skilled diplomat. Born around 1450, he served as court steward to four kings: Louis XI, Charles VIII, Louis XII and François I. His occupation kept him away from home a lot, and just as well, judging from the frescoes he had painted in the courtyard gallery of his 15th-century Château de Villeneuve Lembron: One painting depicts an emaciated wolf with a damsel clenched in its teeth; a verse on the wall tells us the beast is starving because it can eat nothing but obedient wives. Alongside is a turtleback monster with a dragon’s tail, hugely fat because it feasts on husbands with insubordinate spouses. (One such husband is pictured on his knees pleading to be eaten, a fate evidently preferable to his domestic life.)

Rigaud also had some fun with his coat of arms. Above the crown at the top is the head of what appears to be a long-eared donkey—possibly, says the château guide, wordplay on Rigaud’s family name, Aureille, which sounds exactly like oreille, or ear.

In the 16th century, Rigaud’s massive château-fort, south of Issoire in the Puy-de-Dôme, was taken over by Gaspard de Montmorin, who embellished it with exquisite, newly fashionable grotesques—delicate wall paintings inspired by those found in Nero’s Roman palace, then recently excavated, whose underground rooms were referred to as grottoes, hence grotesque. Even the ceiling of Montmorin’s stables was frescoed with battle scenes and jousting gods and goddesses. More recent additions to the wonderful interior furnishings include 17th-century Aubusson tapestries depicting Alexander the Great.

Busséol seems to grow right out of its craggy hilltop, defiant  and powerful with its 10-foot-thick stone walls. Among the oldest of the Auvergne châteaux, it was built on the site of a second-century Roman castrum (fortress), and records show that King Pépin I, grandson of Charlemagne, visited a walled fortification here in 833. The current château-fort was built circa 1170, one of the few extant examples of Romanesque military architecture.

Over time, Busséol, the fief of the Comtes d’Auvergne, by virtue of marriages and bequests, belonged to Catherine de Medici (an estimate for roof repairs addressed to her in 1585 is on view), Marguerite de Valois and Louis XIII.

Reached by precarious winding steps cut into the rock, the door leads directly into the Salle des Gardes. On one side stands a huge stone cistern, still with its metal pulley and a wooden bucket for hauling up water. Upstairs, the fireplace in the Grande Salle has a  rare circular chimney, to accommodate huge logs standing on end for a better draft. The floor is covered with terra-cotta tiles copied from a few remaining originals, some decorated with strange stylized birds and others with fleurs de lys. Charles IX once slept in one of the bedrooms, now furnished with a regal (if narrow) canopy bed.

A medieval garden is terraced sharply up the rocky promontory, filled with trees, flowers and herbs—palms and oleander, roses and cyclamen, basil and foxglove. Surrounded by the battlements of the chemin de ronde, the garden offers a sweeping view of the countryside. Busséol is smaller and more rustic than many other châteaux. Meticulously restored, it shows that castle life could sometimes be cozy and snug.

Looming above the village of La Palisse, the Château de La Palice is a 12th-century fortress grown into an elegant residence. Built as a small walled manor house, it was bought by Jacques I de Chabannes, another companion of Jeanne d’Arc, in 1430. His Gothic tombstone and that of his wife are found in the chapel, and the Chabannes family still lives in the oldest section of the château.

The knight’s son, Jacques II, was known as “Le Maréchal de La Palice” thanks to his military exploits. He died during the battle of Pavia in 1525 and unfortunately was immortalized by this simple poem:

(Alas, La Palice is dead/ He died in front of Pavia/ Alas, were he not dead/ He would still be envied.) The last line, transformed into “Il serait encore en vie“—if he weren’t dead he would still be alive—became a schoolchildren’s jingle and engendered a French term for the silly affirmation of a self-evident fact, a “lapalissade.”

It was also the heroic Maréchal who, back from the wars in Renaissance Italy, brought Florentine workers to transform the dark feudal fort into a light-filled palace, building the vast central structure, adorning the facade with red and blue bricks and adding a spiral staircase so large that legend says the owners climbed it on horseback.

The Salon Doré holds two magnificent tapestries depicting the Preux Chevaliers, Hector and Godefroy de Bouillon, from an original set of nine. All nine disappeared during the Revolution; six were found in an antique shop in 1880 and bought back, but four of those were stolen in 1977 and have never resurfaced. As the ornamental border on the tapestries repeats, Post tenebras spero lucem—After darkness I hope for light.

Opening hours vary constantly; always verify. Almost all the châteaux are visited on guided tours only, nearly always in French. Some are way off the beaten path, but they are worth the effort.

Originally published in the July/August 2007 issue of France Today; updated in December 2012