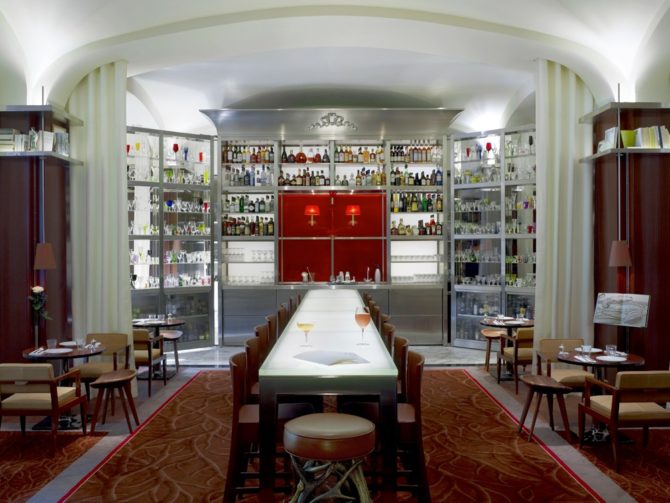 French designer Philippe Starck is an old hand at rejuvenating faded hotels. Since the Royalton, his first venture with hotelier Ian Schrager in Manhattan in 1988, he has winged around the US, Europe and Asia splashing his stardust on hostelries at every go. But if they all buzzed with instant cool, comfort was lower on the list. So after an epic two-year revamp, hooray for Starck’s transformation of the 1928 Royal Monceau, near the Champs Elysées in Paris.

Now called Le Royal Monceau Raffles Paris,it’s owned by the Qatari Diar group and managed by Sylvain Ercoli and the Raffles chain, named for the legendary Raffles Hotel in Singapore. It might also be called the “Best of Starck”. It’s the designer’s first really palatial hotel, it’s already earned France’s new 5-star rating and it’s as sumptuously comfortable as it is cinematically glamorous.

The 85-room, 54-suite, 10-apartment hotel announces its new colors right from the entrance—Starck is a showman and he specializes in visual excitement. Instead of a cold lobby, Le Grand Salon is furnished with sleek saddle-tan leather sofas and chairs with tables for perusing a newspaper with a coffee, having a snack or just conversation—a meeting place with the inviting ambiance of a super-luxe Left Bank café. Arne Jacobsen’s “Egg” chair beckons from one corner; a colorful, beaded African seat entertains the eye in another, echoed by varied and colorful lamps. Starck-chosen art photos decorate the walls.

Off to the left, the art bookstore offers books, exhibition catalogs and an “art concierge” to help arrange exclusive art itineraries. There’s also an art curator, in charge of the hotel’s growing collection of contemporary art and photography.

Straight after the Grand Salon comes the Long Bar, a wink at the original Raffles in Singapore—Starck calls it “a temple of crystal, glass and mirrors”. At one end, the cocktail display cabinet, centered by a square of lipstick-red glass, is an artwork on its own. Hop up on a stool at the glass and wood communal table to chat with other barflies, or muse alone over a drink—a Mysterious Lady perhaps—custom-mixed by the bartender.

La Cuisine, the French restaurant, has sleek beige leather sofas and chairs and features another communal table, this one in glass and chrome next to the open kitchen. A vast bell lamp lights up a round table near a glass case displaying a collection of contemporary ceramic plates commissioned by the designer. Above, a vivid fresco in primary colors brims with Calderesque gaiety.

The Italian restaurant, Il Carpaccio, is done in what Starck calls “Sicilian Baroque”, with one gleaming shell-encrusted grotto section and another like a tented conservatory, decorated with a rustic raffia-wrapped chandelier and green rattan seating. Both the hotel’s restaurants overlook the interior garden, with an ornamental pond and benches designed by über-hot French landscape artist Louis Benech.

Chandeliers are everywhere. On the Grand Stairway, Starck has even corralled groups of them into exuberant bouquets of light reflected in huge mirrors to dazzling effect.

And that’s not all. A screening room with deep leather chairs in soft gray—with one standout seat in lipstick red (for the producer?)—is ready to welcome private film parties in style. The smoking room, La Fumée Rouge, is paneled in bordello-red leather, with a glass door so puffers can see out and companions, perhaps, can signal when it’s time to stub out those ciggies and stogies.

Still to come: a Royal Eclaireur concept store, a Clarins spa, a 300-foot swimming pool, a kids’ club and an art exhibit space.

Upstairs, rooms and suites are sophisticated havens in white and greige, with comfortable leather seating, big beautiful beds, walk-in dressing rooms, state-of-the-art marbled and mirrored bathrooms, and lots of light reflected everywhere by Starck’s signature oversize mirrors. Some of them do double duty, morphing with a click into TV screens.

Since he leapt center stage with the Café Costes in Les Halles in 1984, the designer has liked to dream up design scenarios. (The revolutionary café was designed to be “as beautiful and sad as the main station in Prague”.) There’s a scenario at work in the Royal Monceau suites, too, inspired, says Starck, by writer André Malraux, France’s first minister of culture in 1959. Would Malraux push the bed against the wall in a bourgeois manner? Mais non! claims Starck. He would set it in the center of the room to catch the perfect view of the Arc de Triomphe or the morning sun.

“A hotel is a human adventure,” deems Starck. “It’s not about design,” he says, “but about creating experiences, emotions, memories, so people who come will be happy, and come back”. Even a beautiful décor, Starck maintains, is not enough. “A hotel room is empty, terribly empty. It takes days to fill it.”

So the designer has stepped in to do just that, with a myriad of whimsical details. A bedside lamp has a message on the shade; on a bedside table, a sketch of a smiling couple, or a handwritten letter, is pinned carelessly above a stack of French novels. Under a glass desktop, there are scattered gallery invitations; a map of Paris is annotated with the designer’s must-see spots. A leather sofa is ready for TV viewing or room-service dining, with pillows and a snug fur throw. Luxe indeed. Some suites have signed guitars. The Ray Charles has a white Baby Grand. Starck’s rooms are certainly not empty—a major minimalist might have a panic attack.

Who could resist the mischievous esprit that hides love letters in a drawer and casually arranges a string of pearls on an elegant sculpture of a feminine hand, as if left behind by a forgetful guest. It could only happen in Paris. Memories are made of this.

Originally published in the January 2011 issue of France Today

Previous Article Cream of Beet Soup with Cream Clouds
Next Article Shall I Compare Thee to a Chardonnay?