Shall I Compare Thee to a Chardonnay? 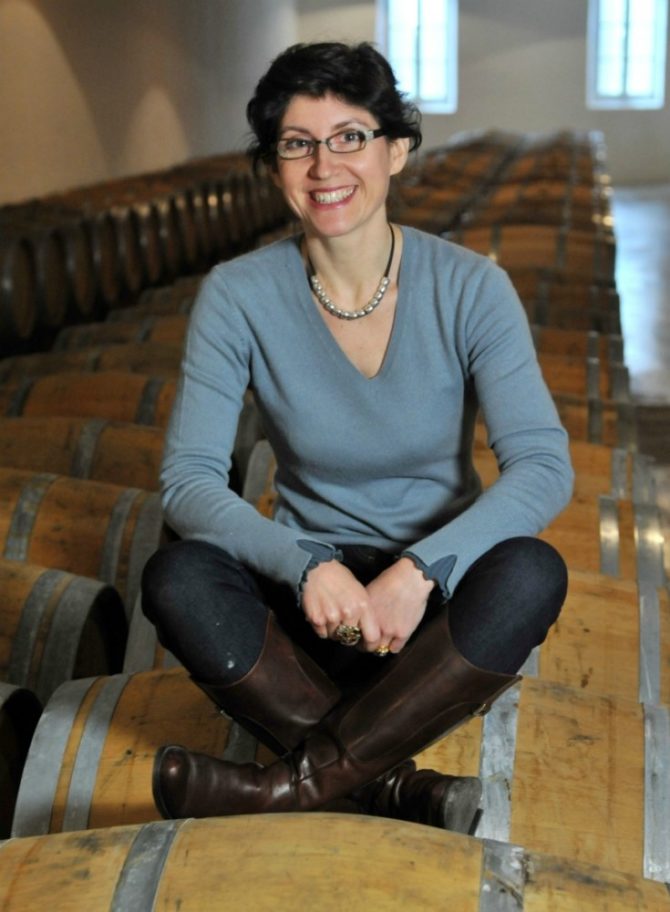 When the leaves turn red and gold, and a hint of wood smoke floats in the air, then you know that the festive season is just around the corner. In bygone days this was a time for feasting, not just to celebrate a safe harvest, but to prepare for the coming winter—packing on a little extra weight might strain the corsets but could stand you in good stead when the larder dwindled. So it’s probably something in our genes that makes this a time to indulge a little. “Bring me flesh and bring me wine,” ordered Good King Wenceslas for the December 26 Feast of Saint Stephen, and he knew what he was doing.

But what wines to drink on holidays? A good question and I’m glad I asked it. The festive season has its traditional fare and what’s good for the goose—try an Alsatian Riesling to help cut through the fat—won’t necessarily work with other dishes such as the Christmas Eve carp eaten in Poland, although—pace the Poles—it’s difficult to imagine what wine could possibly complement a muddy-tasting bottom-feeder like Cyprinus carpio.

One good thing about the holiday season is that it’s about extending our gastronomic horizons and adding to our wine repertoire. By all means round up the usual suspects—the cabernet sauvignons, chardonnays and chenin blancs. Let Aunt Agatha get tipsy on her customary crème de menthe frappée. Make sure you have plenty of Two Buck Chuck for cousin Fred who insists all wine tastes the same. But for yourself and those dear to you, try something you might not ordinarily contemplate: wines at the sweeter end of the spectrum—the ones we loosely call dessert wines (or pudding wines for the British, who loosely call dessert pudding) because they are invariably served with the sweet dishes to end a meal.

Sweet wines—ranked by the French as doux, moelleux and liquoreux in ascending order of sweetness—are the underrated, and often underpriced, stars of the wine firmament. To be sure Château d’Yquem, the fabled white Sauternes, shines like a super nova and costs the earth. But most sweeter wines do not command the space they once did on restaurant wine lists or in our cellars. This may be because our sugar-conscious society eats less dessert and, by extension, drinks less dessert wine. Perhaps we also associate sweet wines with a lack of oeno-sophistication because wine neophytes tend to prefer them. And, frankly, some are not worth drinking. But many excellent sweet wines have an opulence, an intensity of taste and a complexity of structure and texture enough to captivate even the most devoted dry wine drinker.

All wines begin life sweet, since they derive from grape juice, which is full of sugar. During fermentation, yeasts (naturally occurring or cultivated) convert the sugar into alcohol and carbon dioxide gas. For those of you with a scientific bent the equation is C6H12O6 ? 2 C2H5OH + 2 CO2. The CO2 escapes into the atmosphere (unless you trap the gas in a bottle to make sparkling wine) while the alcohol, mixed with the remaining grape juice, becomes wine. If the fermentation continues until all the sugar is converted, you get a dry wine. Stop the fermentation along the way and the wine will be sweet or semisweet, depending on how much sugar remains unconverted.

There are many ways of making sweet wines. In some places—notably Germany—wines are fermented dry and then sweetened by adding a small amount of grape concentrate (the Germans call it süssreserve or sweet reserve). French wines known as vin doux naturel are sweet because the fermentation is arrested by adding grape spirit, which raises the alcohol content to a level at which the yeasts can no longer ferment the juice—a practice known in France as mutage.

But the greatest sweet wines—France’s Sauternes or Germany’s trockenbeerenauselese—are made from grapes affected by Botrytis cinerea, or noble rot, a fungus which, in its benevolent form, dehydrates and shrivels ripe grapes and then metabolizes the sugars and acids to produce a concentrated juice that results in sublime wine that lasts for eons.

So, which sweet wine to drink and what to drink it with? The French, who have been savoring sweet wines for centuries and have no image hang-ups or inhibitions about drinking them, do not refer to “dessert wines” because they do not confine sweet wines to the pudding end of the meal. Take, for example, a fragrant gewürztraminer (literally a wine made from the spicy traminer grape) from Alsace, or a so-called vin doux naturel from Mediterranean vineyards like Muscat de Rivesaltes. Both make marvellous aperitifs.

With foie gras the French often serve an accompanying glass of sweet wine—a Sauternes from the Bordeaux region, a golden Monbazillac, or a Pacherenc du Vic Bihl from Madiran. Cheese is more likely to be paired with a vin de paille than a red—especially cheeses like Roquefort made from sheep’s milk or any of the hundreds of chèvres found throughout France. Dessert might be accompanied by a demi-sec champagne (a style fast disappearing elsewhere in the world) or a semisweet, sparkling Blanquette de Limoux made from the mauzac grape using the so-called méthode ancestrale that, Limoux locals claim, was copied by a Benedictine monk named Dom Pérignon to produce Champagne—an early example of industrial espionage.

Most French regions produce some sweet and semisweet wines and it’s impossible to do them all justice. So here are some suggestions based not on where but on how they are produced. When you taste these wines remember that sweetness is not simply a function of a wine’s residual sugar but of our perceptions, which in turn are influenced by the temperature of the wine, the alcohol level and the acidity, among other things. Thus a chardonnay with low residual sugar but high alcohol can often seem sweeter than, say, a more acidic, lower-alcohol chenin blanc with ten times the sugar level.

Top of anybody’s list of sweet wines are those produced from grapes affected by pourriture noble, or noble rot.

Some grapes—notably tightly bunched varieties like sémillon, chenin blanc and riesling—are more susceptible to noble rot than others. Conditions in the vineyard also have to be right for the Botrytis cinerea fungus to take hold and spread at the right pace—cool, humid mornings and sunny afternoons while the grapes are ripening are ideal. The fungus also proliferates unpredictably from bunch to bunch and vine to vine so that hand picking is essential and a vineyard may often have to be picked over many times to harvest botrytized grapes at their peak. The labor intensity of the process means that noble-rot wines tend to be more expensive.

Low yields from the shrivelled grapes also reduce volume, making the production of botrytized wines mostly a labor of love rather than profit. At Château d’Yquem it takes one vine to produce a single bottle, which helps explain the eye-watering prices demanded and paid for this extraordinary wine. But the end result is sensational, setting the benchmark for all other sweet wines produced in France, or anywhere else in the world for that matter. Fortunately for wine lovers there are other botrytized wines costing slightly less. D’Yquem’s neighbor, Barsac, and, slightly further afield, Monbazillac and Saussignac all produce great botrytized wines. In Sauternes and Barsac try Châteaux Climens, Coutet, Guiraud, Rieussec and Suduiraut. In Monbazillac (no longer disparaged as the poor man’s Sauternes) look for Château Haut-Bernasse and, in Saussignac, for Clos d’Yvigne .

We associate the Loire Valley with dry whites—Sancerre, Pouilly Fumé, Muscadet—but the small enclave known as Quarts de Chaume near Angers produces exquisite botrytized chenin blanc wines of depth and complexity. Vouvray’s sweet chenin blancs are also outstanding, and Domaine Huet has consistently produced some of the greatest whites of the past century. Try to find Huet’s Cuvée Constance, named for the wife of the domaine’s founder, a wine that is not made every year.

Grapes left on the vine tend to get eaten by birds, but if the little winged perils can be kept at bay and the grapes allowed to dry out on the vine they can produce succulent wines of great character. Alsace has led in the production of vendange tardive wines thanks to the efforts of the Hugel family. Passerillage in Alsace can also be accompanied by noble rot so that the resulting wines have the depth associated with botrytis. Sweetness can vary considerably so look for wines that bear the words Sélection de grains nobles. Other regions make what are essentially late-harvest wines even though they may not employ the term itself. Try a Jurançon from the Béarn region at the foot of the Pyrenees,or a Pacherenc du Vic Bihl from Madiran.

The mountainous Jura region makes small amounts of glorious “straw wine” that is cask-aged for three years. The Rhône Valley also produces vin de paille—look for those from Chapoutier or the illustrious Chave family—but less is produced these days and it can be hard to find. Mas Amiel in Maury makes a superb vin de liqueur (a sort of cross between a vin de paille and a passerillé wine subjected to mutage) called Plénitude.

The name suggests a wine that is naturally sweet, or doux, but they are made by mutage. One of the best known of these wines is Muscat de Beaumes de Venise, from the Côtes du Rhône area. But Languedoc-Roussillon is the natural home of grenache and muscat-based vins doux naturels. Mas Amiel makes the best sweet red wine in the mountainous appellation of Maury. The areas of Rivesaltes, Rasteau and Frontignan all produce vins doux naturels, but the standout is Banyuls on the Mediterranean coast near the Spanish border. Banyuls and Banyuls Grand Cru come in both red and tawny versions, the red being the closest France gets to making a port wine. Look for Domaine du Mas Blanc and L’Etoile. Banyuls also has the distinction of being one of the few wines that can stand up to chocolate—and thus deserves a place in every home during the festive season.

It should be sheer folly to make a late harvest of 100% sauvignon blanc in the Languedoc, but winemaker Diane Losfelt has created a wine of great charm, with concentration, freshness, a flowery nose and a sensual palate. www.chateau-engarran.com

Patrice Lescarret is a jovial, passionate vigneron with strong ideas. His Folie Pure, made in exceptional years from local varieties such as ondec and len de l’el (meaning far from sight), as well as muscadelle, sémillon and mauzac, is fresh and vibrant, with hints of quince and compote. www.causse-marines.com

My first wine epiphany. I was a student and helped my sommelier prof to serve the wine for a dinner. There was Château de Fesles from the Loire Valley—a chenin blanc like fresh honey from the hive—floral, spicy, rich and with a divine apricot finish. I can still taste it! www.fesles.com

Impossible not to mention my current boss Alain Brumont’s Cuvée Brumaire (named for an autumn month in the French revolutionary calendar, a time for fog or brume), made from 100% petit manseng—an elegant wine, with hints of apricot, delicate ripe pears and verbena. Older vintages have an touch of white truffle. www.brumont.fr