[Editor’s note: Due to the pandemic lockdown, the luxury châteaux-hotels in the Younan Collection are currently closed until early 2021. The exception is the Domaine & Golf de Vaugouard, which will remain open until December 2020.]

In the late 1970s, an almost-penniless Zaya Younan arrived in the U.S. from Iran, and succeeded in fulfilling the American Dream way beyond his expectations. Fast forward to 2020, Younan is a successful real estate magnate and entrepreneur, living in Los Angeles, with vast real estate holdings in the U.S.

In 2015 Younan fulfilled another dream but this time it was in France. Younan had always dreamed about owning an authentic French chateau and given that he thinks and acts big when it comes to expanding his business empire, he acquired four châteaux, mostly in or near the Loire Valley. Using his American work ethic of getting things done fast and efficiently, Younan’s four châteaux were renovated and transformed into luxury hotels and resorts, opening in 2018. Younan went on to create La Grande Maison Younan Collection, which focuses on European style luxury. The lifestyle brand includes the five châteaux plus one other hotel, two golf courses, a cigar company, and a winery. The motto of La Grande Maison Younan Collection is: “Everyone deserves a night in a castle”.

Below is a detailed description of the six properties in La Grande Maison Younan Collection in France. 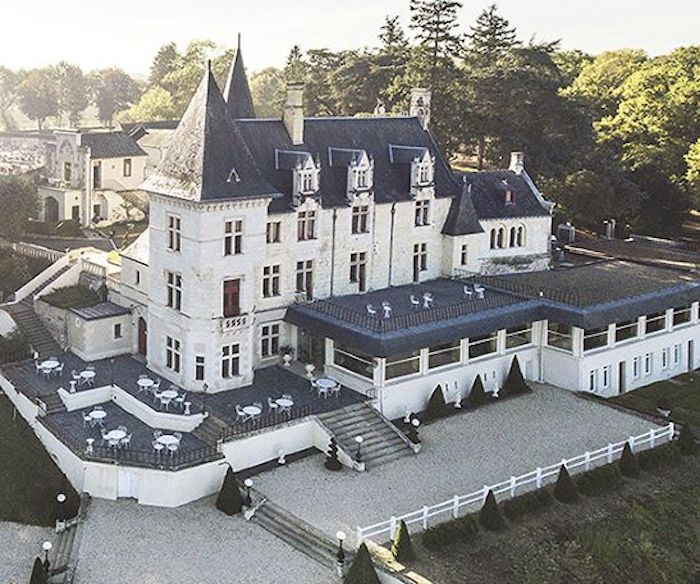 Climbing up a steep hill off a country road and arriving at Château Le Prieuré, the first thing you notice are the stunning views of the Loire Valley and the lofty river.

The history of the hotel extends back to the 10th century when a sect of Benedictine monks discovered the forest grounds, establishing a commune to worship in silence and nature. A Renaissance-style castle was built on the site in the 19th century by the Count of Aupébin, followed by the ownership by Count of Castellane in the 20th century.

Now a stylish hotel, the 21 rooms are sumptuously decorated with cotton and silk fabrics in shades of royal blue, deep red, and mustard, flower pattern wallpaper, and restored antique furniture. Some of the rooms have Queen-size canopy beds and others have gold gilt headboards. The series of deluxe rooms and suites, which measure 300 to 500 square feet in size, have marble bathrooms and scenic views of the Loire.

At the Le Castellane Restaurant, Executive Chef Richard Prouteau, arriving with an exceptional resume of working and teaching in some of the top restaurant schools throughout Europe, brings his culinary wisdom to update and refine French cuisine. The 65€, three-course dinner menu, which changes seasonally, has dishes such as a soup with mussels, chestnuts, and fennel; a pot a feu prepared with local raised beef, carrots and onions in a curry sauce; and a tempting dessert of figs, an almond biscuit, and fennel ice cream.

Lunch and dinner is presented in the elegant dining room which recalls the renaissance era with grand crystal chandeliers, velvet tufted chairs and handsome wood panel walls. Before or after dinner enjoy an aperitif or digestif at Le Castellane Bar and Lounge in an elegant setting of marble floors, black and gold pattern carpeting, and mahogany furniture, with a picture window with views of the Loire.

The restaurant and bar feature wines from the Younan wine label such as Saint-Emilion Cru from 2014, a Bordeaux rosé, and a Saint Emilion Blanc. Other amenities include wooded walking paths, a miniature golf course, and basketball and tennis courts. 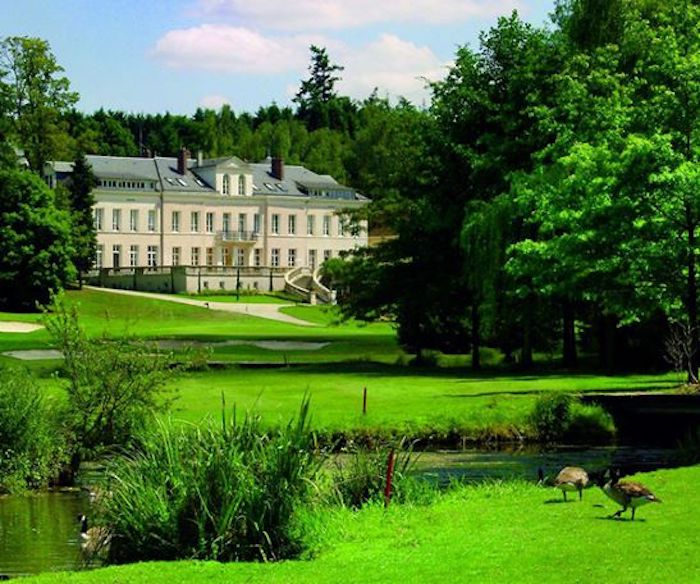 Just an hour from Paris and 35 minutes from Fontainebleau, Domaine de Vaugouard is an easy trip from Paris for a weekend away. Formerly a castle built in 1750 by Colonel de Salis Samad, a close friend of King Philippe, it was then inherited by his nephew, Baron Henri de Triqueti, who then gave access to the Duke of Orléans, to use as a hunting ground.

Domaine de Vaugouard is now a four-star hotel with amenities such as an outdoor, heated swimming pool with food and drink service poolside, spa and gym, a tennis court, and bicycle rentals. The 18-hole, four-mile, golf course surrounded by a majestic forest, features a driving range (4 tees, 8 covered), a putting and a pitch green, and pitch and putt. 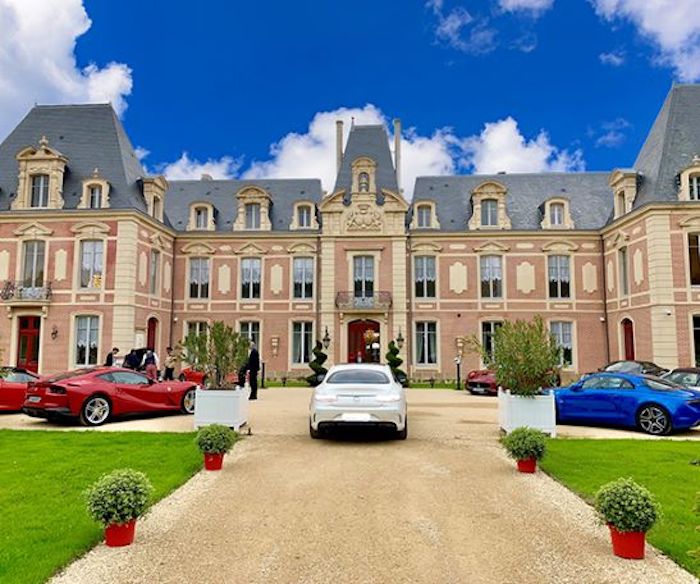 The only five-star hotel in the Younan Collection is Alexandra Palace, named after Younan’s daughter. The handsome chateau, constructed in the 1600s, has a brick and limestone façade and is situated on 160 acres of natural woodland and ponds in the Nouvelle Aquitaine region. Nearby attractions include the historic city of Poitiers, the lush marshes and streams of Niort, and the port of La Rochelle.

An 18-hole golf course sets the hotel apart as more of a resort. The multi-faceted golf facility includes a driving range with 30 covered stations, putting and chipping greens, pitch and putt with 6 Holes (over 400 Yards), a pro-shop and private locker rooms.

A mixture of classic French décor and luxurious contemporary design, all rooms have Italian marble bathrooms and Lanvin bath and beauty products. The decadent, 5,000 square foot, presidential suite has French antiques and furniture, a sauna and steam bath in the room, and a sprawling 325-foot stone terrace with a view of the golf course.

Dining and drinking al fresco on the terrace under white canvas umbrellas facing the green landscape of trees and grass when the weather allows is a delight. Enjoy a five-course tasting menu paired with matching wines at Le Daniels Restaurant.

The intimate Cognac Room serves as a place to savour a taste of cognac and smoke a cigar from their El Septimo Premium Cigar collection. 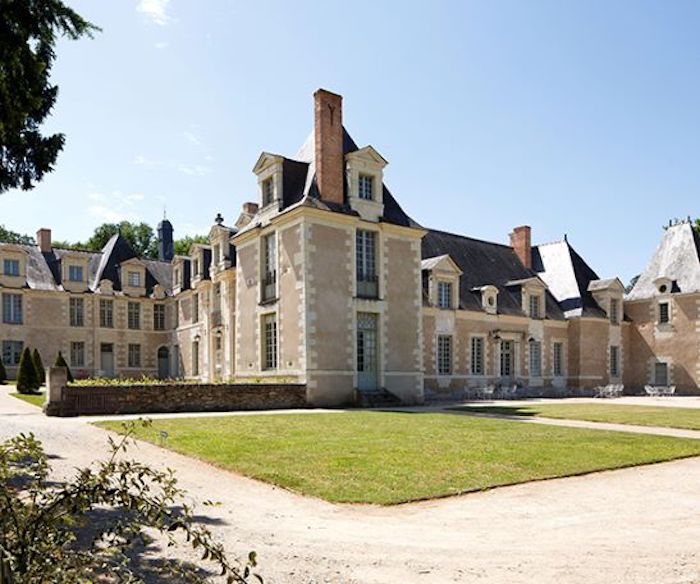 Just 15 minutes from Angers, in the heart of the Loire, is Château de la Perrière. Classified as an official historical chateau by the French government in 1983, the Château de la Perrière was constructed in 1699 for François II Goddes de Varennes and is considered one of the largest chateaux in the Maine-et-Loire.

The property today serves as a private event space for weddings, corporate events, and seminars, that can accommodate up to 300 guests with extensive terrace and garden areas.

The Sévigné Restaurant has a grand dining room inside with a fireplace and a vast outdoor terrace with chef Thierry Lejoly elevating traditional French cuisine by infusing Vietnamese spices. 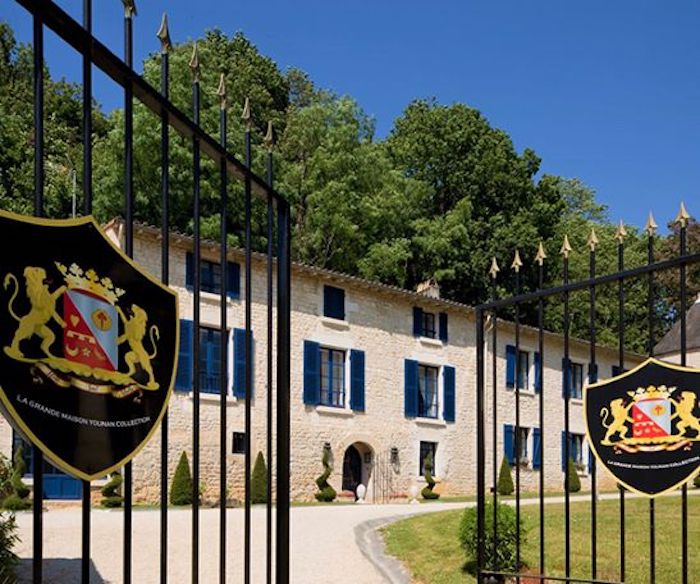 On more of an intimate scale is Hotel Saint Martin, the smallest of the La Grande Maison Younan Collection with just 13 rooms and suites. Hotel Saint Martin, which is almost equidistant from Poitiers and La Rochelle, was at one time a resting place on the Santiago de Compostela spiritual pilgrimage that begins in France and terminates in Spain.

Resembling more a manor house than a chateau, Hotel Saint Martin borders the Sèvre Niortaise River on 100 acres of wooded land. The cosy rooms done in a palate of dark, atmospheric colours have soothing views of the river and garden. Original stone walls and wood beams on the ceiling give extra charm to the duplex suite that has the feel of a country cottage.

Chef Charlotte Barreteau, who grew up in the area, prepares a menu with popular French comfort food and modern, inventive dishes at the Les Logis Restaurant, which has a rustic but refined atmosphere with a substantial stone fireplace. There’s also an outdoor terrace serving lunch and dinner overlooking the woods.

An outdoor, heated swimming pool and bicycle rentals are some of the other extras in the hotel. 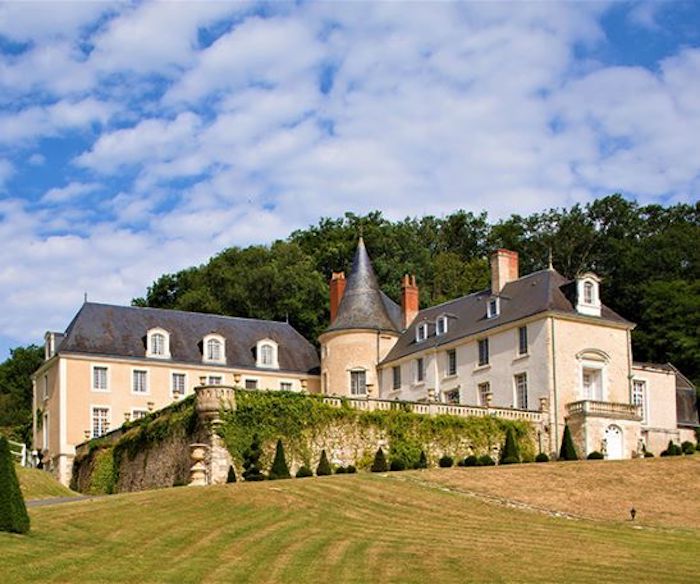 Located in the Loire Valley, just a 20-minute ride from Tours, is Château de Beauvois, a 15th-century Renaissance château, which was a favourite destination of King Louis XIII when he went hunting. Château de Beauvois, now a four-star hotel, has 35 rooms and suites decked out with royal blue satin and brocade fabrics, toile de jouy print drapes and wallpaper, and17th century style antiques. A bathtub and independent shower, Nespresso coffees machines, mini-bars, and air conditioning are included in every room.

Louis XIII dined frequently at the chateau after his hunting expeditions and the current dining room is still fit for a king with a giant stone fireplace, marble floors, crystal chandeliers and oil paintings. Using mostly local ingredients and produce, Chef Régis Guilpain creates a menu that will please even the most jaded palate.

The extensive wine cellar, 59 feet below the hotel, has over 50,000 bottles of international and rare wines. Private wine tastings and classes can be arranged for up to eight people.

Chateau de Beauvois also has tennis and basketball courts, hiking trails inside their private forest, and an outdoor swimming pool.

All of the La Grande Maison Younan Collection properties in France offer accommodations and services for weddings, business conferences (a few of the hotels have seminar rooms), and corporate retreats. They can also be privatized. On site catering is available.

La Grande Maison Younan Collection is now developing new hotels and resorts. Malibu Foz, a resort hotel in the seaside village of Figueira da Foz, Portugal, close to Lisbon, is their first property outside of France.